Is Hepatocellular Carcinoma in Fatty Liver Different to Non-Fatty Liver?

Glaucoma can severely threaten visual function. Although not all glaucoma occurs with elevated intraocular pressure (EIOP), EIOP remains one of the major risk factors for the development of glaucoma [1]. According to a Japanese prospective cohort study, approximately 10% (7 of 75) of patients with EIOP but without visual field defects newly developed typical glaucomatous visual field defects during nine years of follow-up [2]. Therefore, early detection and management of EIOP has been emphasized to reduce the risk of glaucoma development. In addition, numerous factors, such as male sex, older age, obesity, blood pressure, heart rate, alcohol intake, smoking, hematocrit, insulin resistance, history of hypertension, and diabetes mellitus can affect EIOP [3,4,5,6]. Thus, determining and managing systemic factors related to EIOP could be a strategy for preventing glaucoma.
Fatty liver includes alcoholic fatty liver, nonalcoholic fatty liver disease (NAFLD), and fatty liver of any cause. NAFLD is the most common chronic liver disease worldwide. In 2019, the prevalence of NAFLD among the global population was estimated to be approximately 37.3% [7]. Similarly, the average prevalence of NAFLD in South Korea was estimated to be 30.3% during 2001–2014 and is rising [8]. Moreover, global economic burden from NAFLD is tremendous. In the US, between 2010 and 2014, the average medical cost per NAFLD patient was $7804 for a new diagnosis and $3789 for long-term management, which was 1.65 times more than that for patients without NAFLD [9]. Comorbidities accompanying patients with NAFLD, such as obesity, hypertension, diabetes mellitus, dyslipidemia, or cardiovascular disease [10,11,12], partly accounted for the economic burden. Insulin resistance is the most prevalent risk factor of fatty liver disease. It not only directly induces hepatic steatosis but also indirectly promotes it by increasing the secretion of proinflammatory cytokines such as interleukin (IL)-1, IL-6, and tumor necrosis factor-alpha (TNF-α) [13]. Contrarily, patients with fatty liver can also develop insulin resistance through lipotoxicity and adipose tissue inflammation, which are induced by excessive intrahepatic triglycerides in NAFLD [13,14]. Furthermore, in alcoholic fatty liver disease, insulin resistance can develop from the effects of alcohol on hepatic and nonhepatic tissue [15].
Based on evidence of the association between fatty liver and insulin resistance and the association between insulin resistance and EIOP [5,13,14], we hypothesized that fatty liver could also be related to EIOP. However, to date, there is limited evidence regarding the relationship between fatty liver and EIOP. Therefore, we investigated the relationship between fatty liver and EIOP. The direct effect of fatty liver on intraocular pressure (IOP) and its indirect effect on IOP via insulin resistance were also verified.

This was a retrospective single-center cross-sectional study. Figure 1 shows the flowchart of the study population. From 1 January 2016 to 10 June 2022, a total of 16,937 participants visited the health promotion center of an education hospital, Nowon Eulji Medical Center, and underwent a medical health checkup after voluntarily paying for it. We finally selected 16,240 adults who completed health checkups at Nowon Eulji Medical Center after excluding (1) those without IOP data (n = 191), (2) those without abdominal ultrasonography data (n = 457), and (3) adolescents aged <19 years (n = 40). Participants were classified into the fatty liver group (n = 5786) or nonfatty liver group (n = 10454).
This study conformed to the ethical guidelines of the 1964 Declaration of Helsinki and its later amendments. Informed consent was waived because researchers only accessed and analyzed the deidentified data because of the retrospective study design. The Eulji University College of Medicine Ethics Committee approved the study protocol (IRB 2022-07-022).

Abdominal ultrasonography imaging was performed by two experienced radiologists, using LogiQ E9 (GE Healthcare, Milwaukee, WI, USA). Images were obtained with the participants in the supine position. Fatty liver was diagnosed when there was parenchymal brightness, liver-to-kidney contrast, deep beam attenuation, and bright vessel walls on the images [16]. The severity of fatty liver was classified into mild, moderate, and severe degrees. The degrees of fatty liver was divided into 3 classes based on the degree of fat infiltration: (1) mild (a little range of fine echo in liver parenchyma with normal echo in the border of diaphragm and intrahepatic vessels), (2) moderate (moderate range of fine echo in liver parenchyma with some damage in the image of diaphragm and intrahepatic vessel), and (3) severe (vast range of fine echo in liver parenchyma hardly showing the image of diaphragm, intrahepatic vessels, and the back part of the right lobe liver) [16]. We further classified patients with fatty liver into those with (1) fatty liver with viral hepatitis infection, (2) alcoholic liver disease (ALD), and (3) NAFLD. Fatty liver with viral hepatitis infection was defined as positive results for hepatitis B surface antigen (HBsAg), or anti-hepatitis C antibody (HCV Ab), or a self-reported history of chronic hepatitis B virus (HBV) or hepatitis C virus (HCV) infection. Due to lack of information regarding the amount of alcohol intake in the self-reported questionnaire, the ALD/NAFLD index (ANI) was used to distinguish between ALD and NAFLD among the remaining patients with fatty liver. The formula for calculating ANI is as follows [17]:
ANI = −58.5 + 0.637 × (mean corpuscular volume (MCV)) + 3.91 × (aspartate aminotransferase (AST)/alanine aminotransferase (ALT)) − 0.406× (body mass index (BMI)) + 6.35 (for men).
ALD was defined as an ANI ≥ 0. NAFLD was defined as nondrinking or ANI < 0. Among 5786 people with fatty liver, the number of people with viral hepatitis, ALD, and NAFLD was 136, 1024, and 4626, respectively.

All data are presented as mean ± standard deviation for continuous variables and number (%) for categorical variables. For continuous variables such as age, BMI, waist circumference, MBP, whole blood hematocrit, FPG, serum total cholesterol, AST, ALT, and hsCRP levels, Students’ t-test was used to compare differences in variables between the two groups. For categorical variables, such as diabetes mellitus, hypertension, dyslipidemia, HBV, and HCV, a chi-squared test was used to compare differences in variables between the two groups.
Multiple logistic regression analyses were used to estimate the odds ratio (OR) with 95% confidence interval (CI) for EIOP in the fatty liver group compared to the non-fatty liver group. Model 1 included age, sex, and BMI. Model 2 included the variables used in Model 1 plus smoking status, drinking status, and regular exercise status. Model 3 included the variables used in Model 2 plus hematocrit, history of diabetes mellitus, hypertension, and dyslipidemia. The crude and adjusted ORs (95% CI) for EIOP according to the etiology of fatty liver were estimated using multiple logistic regression analyses. A restricted cubic spline curve was used to determine the dose–response association of the OR for EIOP with the severity of fatty liver. A mediation analysis was performed to determine how HOMA-IR, as a mediator, affected the relationship between NAFLD and EIOP. Direct effect was defined as the amount of effect directly exerted on EIOP, irrespective of the mediator (insulin resistance). Indirect effect was defined as the effect of NALFD on EIOP through insulin resistance. The total effect was calculated by summing the direct and indirect effects.
All statistical analyses were conducted using SPSS software version 25 (SPSS Inc., Chicago, IL, USA). All statistical tests were two-sided, and statistical significance was set at p < 0.05.

3.1. Clinical Characteristics of the Study Population

3.2. Relationship between Fatty Liver and EIOP

3.3. Dose–Response Relationship between EIOP and the Severity of Fatty Liver

This research was supported by a grant from the Patient-Centered Clinical Research Coordinating Center (PACEN) funded by the Ministry of Health and Welfare, Republic of Korea (grant HC19C0130).

This study conformed to the ethical guidelines of the 1964 Declaration of Helsinki and its later amendments. The Eulji University College of Medicine Ethics Committee approved the study protocol (IRB 2022-07-022, approval date 9 August 2022).

Informed consent was waived because researchers only accessed and analyzed the deidentified data because of the retrospective study design. 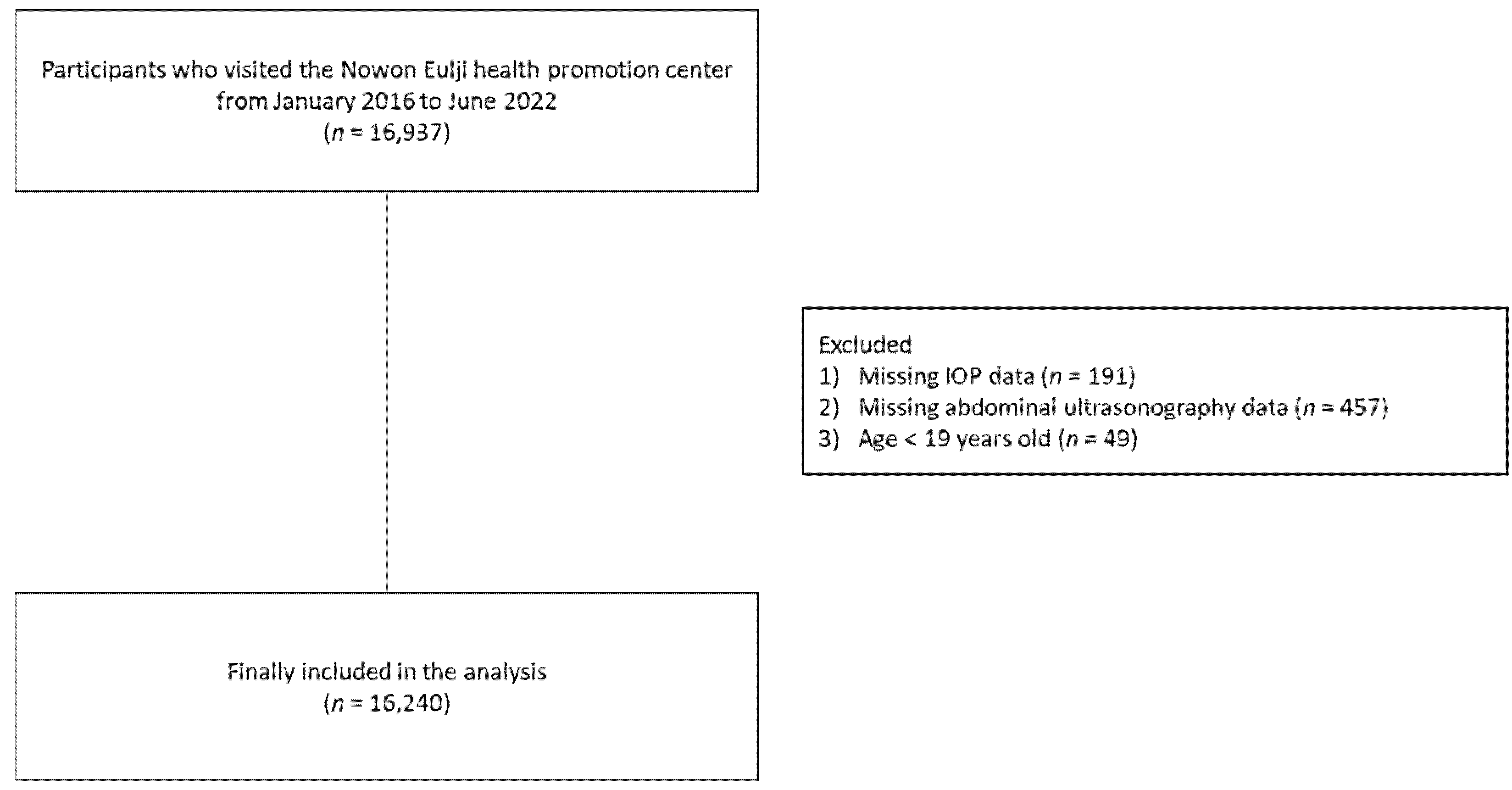 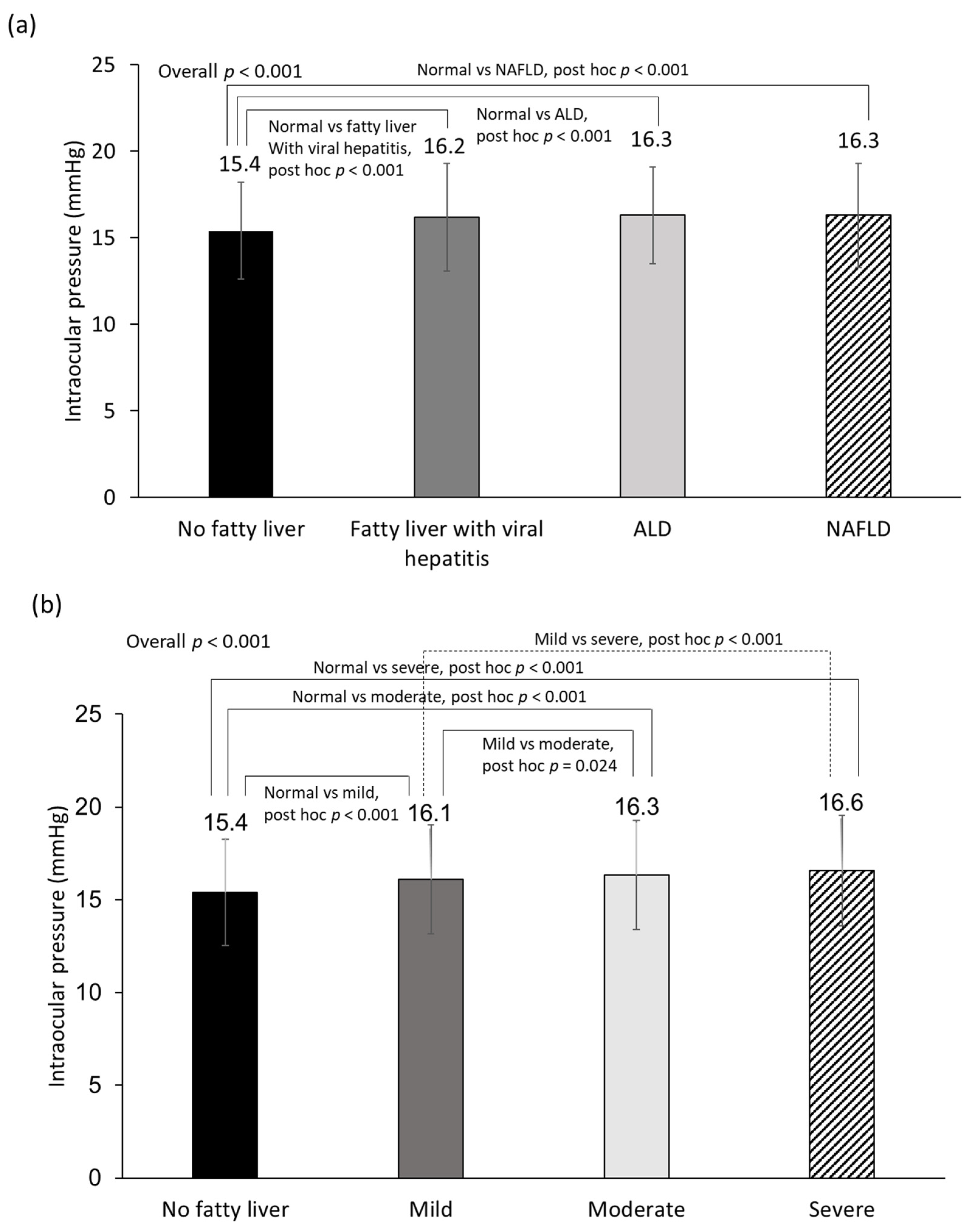 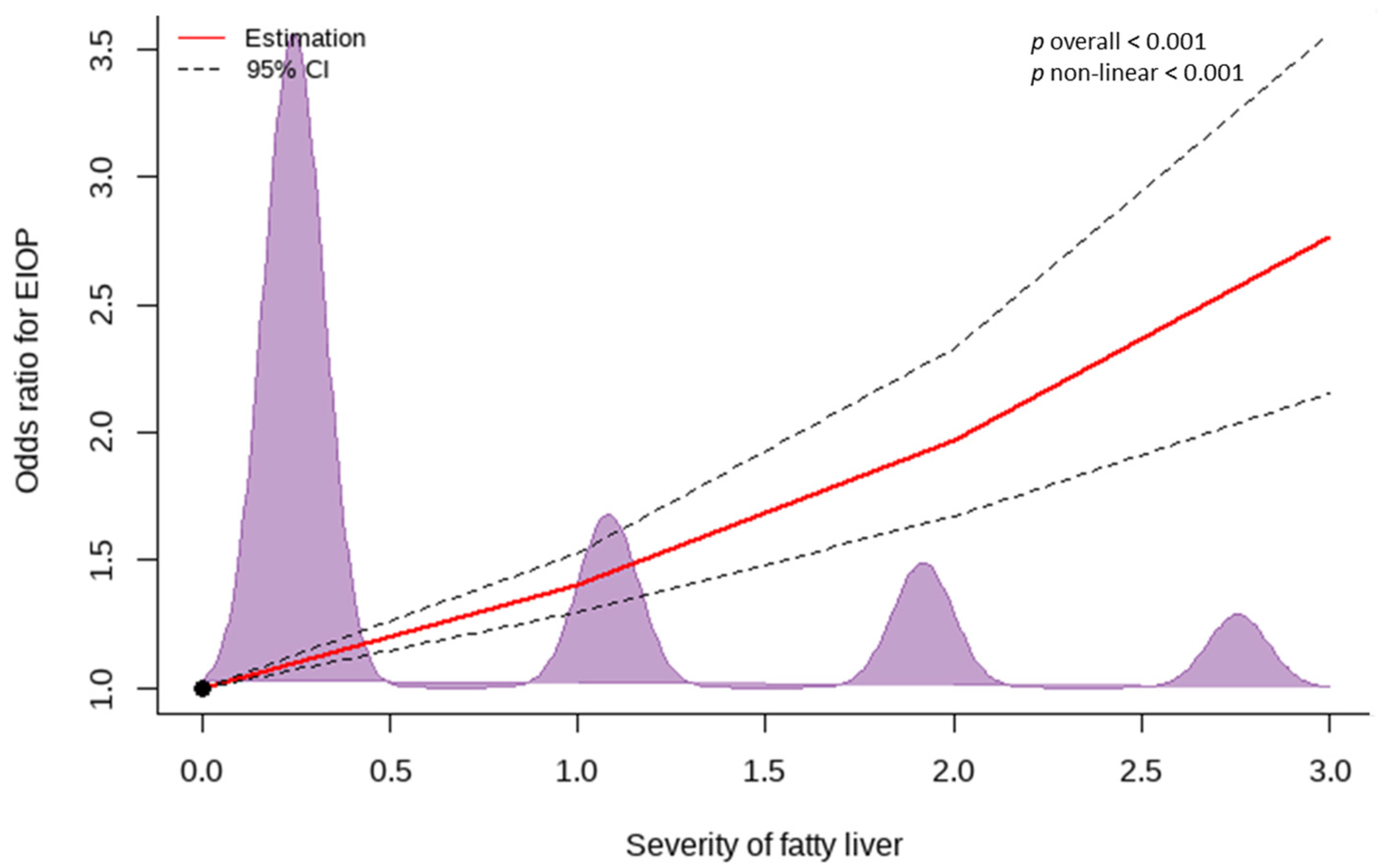