Prevalence of Hypovitaminosis C and its Relationship with Frailty in Older Hospitalised Patients: A Cross-Sectional Study
Next Article in Special Issue

Ludmila A. Perminova
1 and

The Kaliningrad region is known for its specific climate, which can negatively affect the adaptive potential of the body. This manifests in an increased incidence of respiratory diseases and skin conditions. To prevent high morbidity, a plant protein product was included in the diet of first-year university students. This study aimed to assess the effectiveness of this food intervention in preventing the most common diseases among Kaliningrad students. Two groups of university students took part in the food trial. In the control group, catabolic processes prevailed in nutrient metabolism. Disadaptation manifested itself in the metabolism of proteins, vitamins, minerals, hematopoiesis and humoral immunity. Inflammation was indicated by α1- and α2-globulins, a weak immune response, and IgM and IgG. High oxidative stress and low antioxidative ability of blood serum were observed. The plant-based protein product (FP) helped preserve testosterone level and prevent an increase in catabolic reactions. Moreover, it had a positive effect on both red blood cell hematopoiesis (a smaller increase in the average volume of erythrocytes, the same average concentration and content of hemoglobin, an increased relative red cell distribution width (RDW) and white blood cell hematopoiesis (a beneficial effect for the immune system: lymphocytes, the relative content of neutrophils, monocytes, basophils and eosinophils). The stimulation of humoral immunity was evidenced by beta- and gamma-globulins, an active immune response, the level of IgM and IgG, antioxidant protection, reduction of peroxides and an increase in antioxidant activity of blood serum. The 34-week observation showed a 1.7-fold decrease in the incidence of respiratory illnesses and a 5.7-fold decrease in skin and subcutaneous tissue diseases. Acute respiratory infections were reduced 1.8-fold. There were no cases of community-acquired pneumonia in the treatment group, compared with 55.1‰ in the control group. The incidence of respiratory diseases was 3.3–10.6 times lower in the treatment group than in the control group in weeks 6–19. The findings testify to the prophylactic effect of functional food during social adaptation and acclimatization of students. View Full-Text
Keywords: students; social adaptation; acclimatization; functional food; prevention; respiratory diseases; immunity; blood test; vitamins; antioxidants students; social adaptation; acclimatization; functional food; prevention; respiratory diseases; immunity; blood test; vitamins; antioxidants
►▼ Show Figures 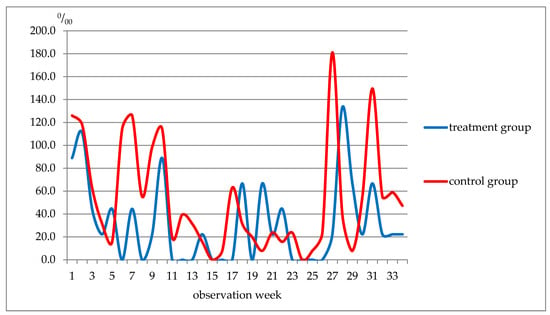