Determinants of the Essential Elements and Vitamins Intake and Status during Pregnancy: A Descriptive Study in Polish Mother and Child Cohort
Previous Article in Journal

It is well known that the rates of muscle protein synthesis (MPS) are augmented after resistance training sessions when dietary proteins are ingested post-exercise in young adults [1,2]. With repeated training sessions, this could result in muscle hypertrophy and improvements in muscle performance (i.e., strength, power). Further, emerging evidence suggests that pre-sleep protein intake also increases muscular accretion and strength in young adults [3]. Dairy milk has a high digestible indispensable amino acid score (DIAAS) and contains a complement of whey (~20%) and casein proteins (~80%) that have both been shown to stimulate the mammalian target of rapamycin (mTOR) signaling pathway engaged in protein translation [4,5]. Whey proteins are rapidly absorbed and result in a transient surge in essential amino acid availability for MPS [6,7], while casein proteins are absorbed at a slower rate resulting in prolonged hyperaminoacidemia, possibly expanding the duration and capacity of MPS [6]. Theoretically, dairy milk, which contains both whey and casein proteins, should rapidly stimulate and prolong MPS following resistance training sessions leading to significant muscular alterations over time [8,9,10].
Research about the efficacy of diary milk ingestion during a resistance training program in young adults is limited. In young untrained males, the ingestion of dairy milk (35 g of protein) throughout 12 weeks of resistance training led to greater improvements in lean tissue mass and type I and II muscle fiber area, with trends for larger strength gains (for both extension and flexion of the knee) compared to those ingesting soy protein [11]. Furthermore, young untrained males who ingested chocolate milk (17 g of protein) following resistance training sessions for a period of 10 weeks experienced greater gains in lean tissue mass (although non-significant) from chocolate milk (1.6 ± 0.4 kg) compared to placebo (0.8 ± 0.5 kg) [12]. Collectively, these preliminary studies suggest that dairy milk can augment the physiological adaptations that result from resistance training in young untrained males. However, the effects in resistance-trained young males are unknown [13]. Moreover, because a higher protein intake may have a beneficial impact on body composition parameters in resistance-trained cohorts [14], the consumption of dairy milk with a high protein content may lead to positive body composition effects in this population.
The primary purpose of this research was to assess the effects of high-protein dairy milk ingestion vs. high-carbohydrate maltodextrin ingestion and resistance training on body composition and muscle performance (strength and power) in trained young males. It was hypothesized that high-protein dairy milk ingestion (post-exercise and pre-sleep) would lead to greater gains in lean mass and muscle performance following 6 weeks of resistance training compared to high-carbohydrate maltodextrin in trained young males. As a secondary purpose, we evaluated the effects of the intervention on serum concentrations of skeletal muscle regulatory markers, as muscle protein balance can be influenced by various hormones and myokines [15]. Indeed, the assessment of different anabolic and catabolic muscular regulatory markers might help in identifying mechanisms for potential favorable changes in body composition and muscular performance.

Thirty trained young males (age: 27 ± 3 years, body mass: 77.8 ± 5.5 kg, resistance training experience: 15 ± 2 months) were enrolled into the randomized controlled trial (RCT; Clinicaltrials.gov: NCT04509297). In addition, The Institute of Physical Education and Sports Sciences (Tehran, Iran) Human Subject Committee approved the study protocol (IR.SSRI.REC.1397.352). Participants were informed of the procedures, and their written informed consent was obtained before starting the study, in accordance with the Declaration of Helsinki. Inclusion criteria included being 18–35 years of age and were currently engaged in resistance training (≥1 year before the initiation of the study). Exclusion criteria included smoking, regular alcohol consumption, having pre-existing medical issues, being lactose sensitive or intolerant, and/or having ingested dietary supplements containing protein, creatine, or omega-3 fatty acids for 24 weeks before the start of the study. Furthermore, eligible participants were excluded if they were unwilling to fully adhere to the trial procedures. Physical activity and medical/health questionnaires were provided to each participant before the start of the study to confirm their health status. We inquired not to alter their regular lifestyle and habitual dietary intake patterns throughout the investigation. Baseline characteristics are shown in Table 1.

The study involved a double-blind, randomized, placebo (control), and repeated-measures design (allocation ratio: 1:1). Before pre-training assessments, participants were acquainted with the experimental protocols. Subsequently, participants were randomly assigned to one of two groups: high-protein dairy milk + resistance training (MR; n = 15) or isoenergetic carbohydrate (placebo) + resistance training (PR; n = 15). The randomization assignment was stratified by digital technology (available at www.randomizer.org, accessed on 15 January 2018). A nutritionist at the university clinic, who was not a member of the core research team, assigned participants to their group and gave instructions on their nutritional interventions. Consequently, this individual could not be blinded. However, the mentioned nutritionist did not take part in data collection and/or analysis. Both participants as well as other members of research team (except the stated nutritionist) were blinded to the treatment allocation until the database was unlocked, and analysis of data was finalized. Measurements were made prior to and following 6 weeks of the nutritional intervention (high-protein dairy milk or placebo) and resistance training. Post-testing measurements occurred ≥72 h after the last resistance training session. All measurements (pre- and post-testing) were performed at approximately the same time each day (within ~1 h) and under the same environmental conditions (~20 °C and ~55% humidity). A flow diagram is shown in Figure 1.

Participants ingested 250 mL of high-protein dairy milk—156 kcal, 30 g of mixture of whey (6 g) and casein (24 g), 0 g fat, 10 g carbohydrate; Kalleh Industry (Amol, Mazandaran, Iran), health license number: 49/14,996; formulation verified by a certificate of analysis from ViroMed Laboratory (Tehran, Iran)—or an iso-energetic placebo (maltodextrin 9%) beverage immediately following resistance training sessions and approximately 30 min prior to sleep. High-protein dairy milk was a commercial protein food product. This ingestion strategy was chosen because immediate post-exercise and pre-sleep protein ingestion have favorable effects on muscle mass and performance [3,11]. High-protein dairy milk and placebo were in opaque (masked) beverage containers and were similar in taste and smell (flavored with vanilla), texture, and appearance (beige color). All researchers and resistance training supervisors were blind to group allocations during the duration of the RCT. High-protein dairy milk and placebo ingestion started on the first day of the resistance training program and occurred in the presence of a resistance training supervisor. Pre-sleep ingestion was not directly monitored, but participants were required to return their empty containers prior to their next subsequent training session.

Prior to testing days, participants fasted for 12 h (water was permitted ad libitum). Immediately prior to measurements, participants voided their bladder. Body mass was determined with a digital scale (Seca, Hamburg, Germany) to the nearest 0.1 kg. Stature was quantified with a stadiometer (Race Industrialization, Shanghai, China) to the nearest 0.1 cm. Body mass index (BMI), fat mass, and lean mass were assessed by a multi-frequency bioelectrical impedance device (Inbody 770, Seoul, South Korea). The test–retest reliability of the bioelectrical impedance method was r = 0.96 to 0.99.

Estimated 1-RM strength for the back squat and bench press occurred 24 h following body composition assessment and blood sampling for both pre- and post-training testing. An additional 1-RM strength test took place during week 3 (mid-point) to further control training load. Prior to the start of the 1-RM test, participants were instructed to refrain from alcohol for 48 h, caffeinated drinks for 12 h, and food and drink for 2 h. It should be mentioned that water consumption was permitted ad libitum. To determine their estimated 1-RM, participants performed two sets of <10 repetitions to volitional fatigue with increasing loads [18]. Their heaviest load and highest number of repetitions performed were then used to determine their 1-RM using the following Equation (1) [19]. The intraclass correlation coefficient was r = 0.95 to 0.97.
1-RM = load ÷ (1.0278 − 0.0278 × repetitions performed)

Twenty-four hours after the determination of estimated 1-RM strength, anaerobic power for the upper and lower body was assessed via Monark Wingate cycle ergometry (Monark model 894e, Vansbro, Sweden) as previously described [20,21]. Briefly, participants cycled or cranked against a pre-determined resistance (7.5% of body mass for the lower body test and 5.5% of body mass for the upper body test) as fast as possible for 10 s [20]. Peak power output was documented in real time during the test, utilizing a Monark Anaerobic test software (v. 3.0, Monark Exercise AB, Vansbro, Sweden) [20].

Participants filled out 3-day food records prior to and immediately following the intervention to determine changes in total energy (kcal) and macronutrient intake over time. Participants were instructed to record all food items (independent of milk or placebo ingestion) for 2 weekdays and 1 weekend day. Diet Analysis Plus version 10 (Cengage, Boston, MA, USA) was used to analyze food records [18].

Between January and May of 2018, we screened 40 trained young males. Of these, 30 qualified for baseline testing and were consequently randomized to either the MR or the PR groups. No participants dropped out after randomization. Data are shown for the 30 participants that finished our 6-week study; 15 participants were in both the MR and PR groups.

This research was funded by University of Tehran, grant number 1397.

The study was conducted according to the guidelines of the Declaration of Helsinki, and approved by the Institute of Physical Education and Sports Sciences (Tehran, Iran) Human Subject Committee (IR.SSRI.REC.1397.352).

The data presented in this study are available on request from the corresponding author. The data are not publicly available due to restrictions.

The authors wish to thank all the participants in this research project. 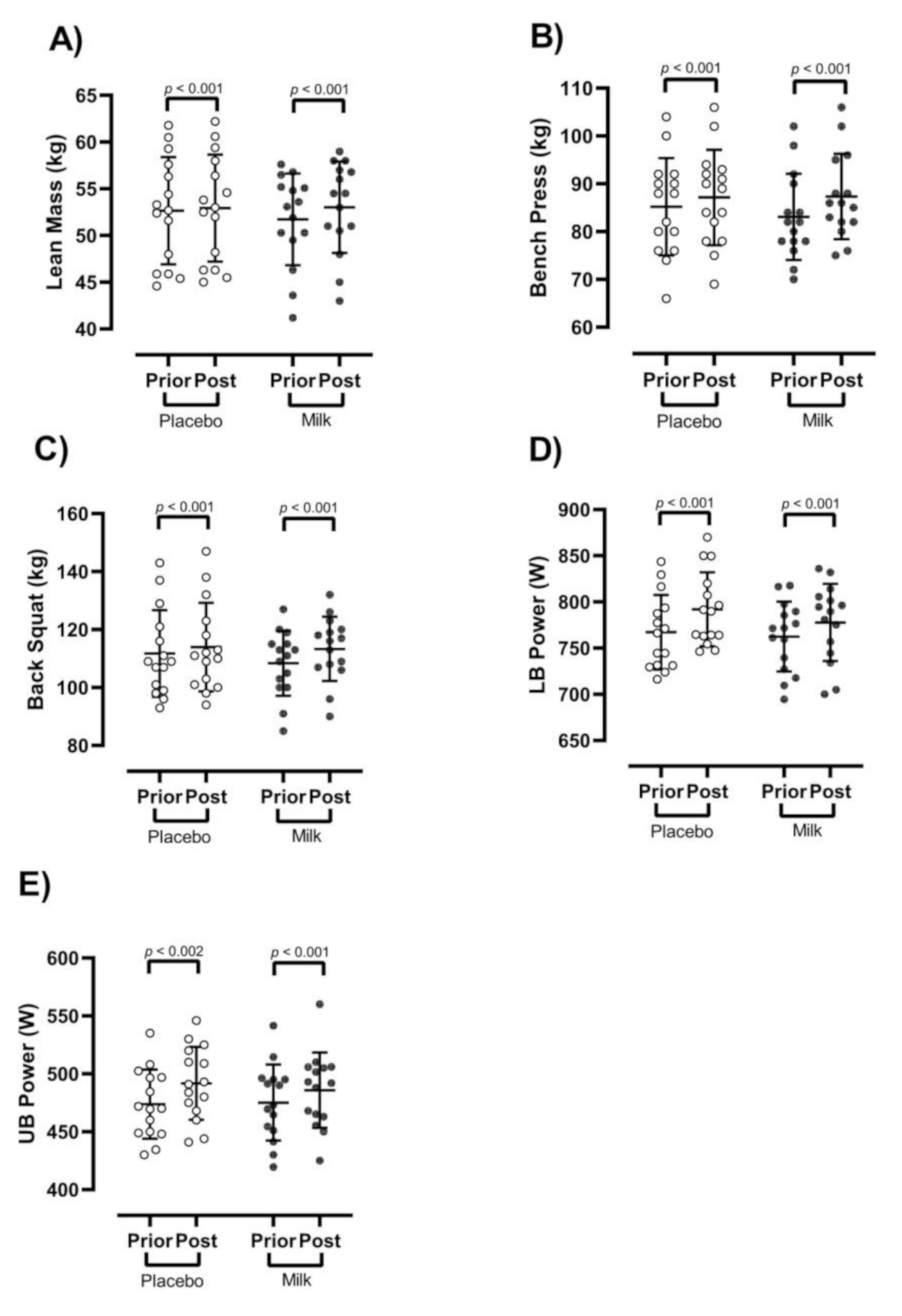 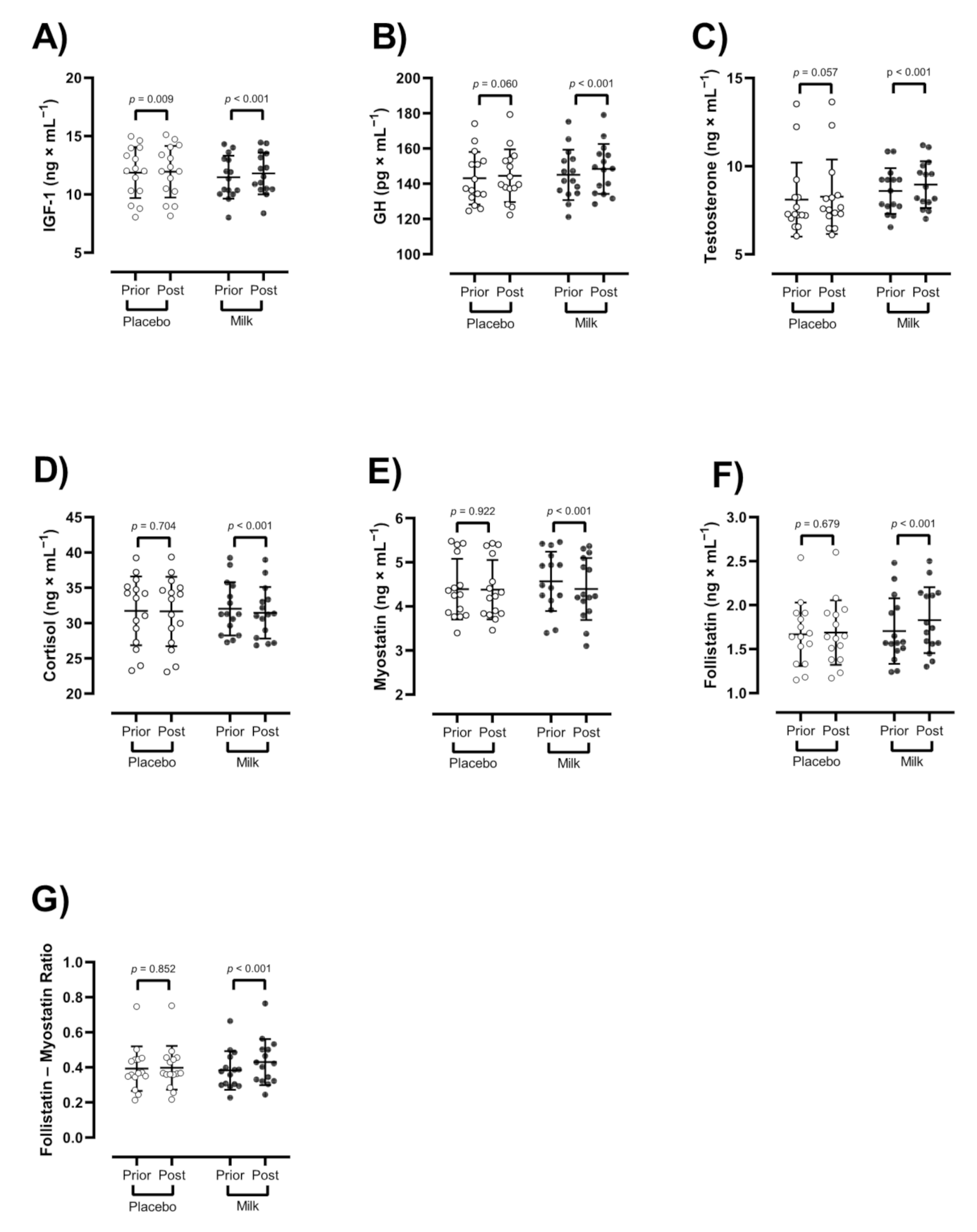 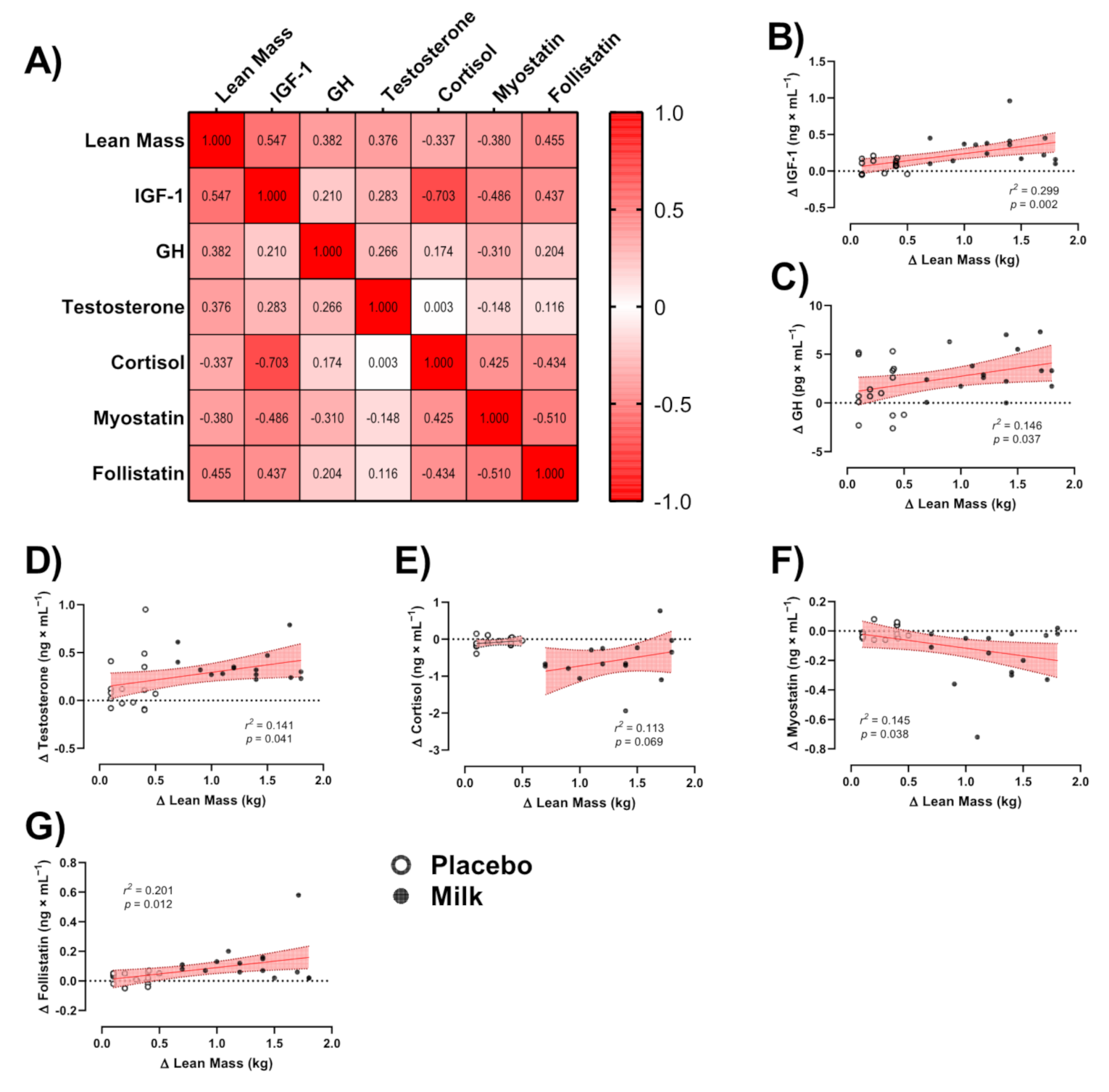