Impact of Dietary Habit, Iodine Supplementation and Smoking Habit on Urinary Iodine Concentration During Pregnancy in a Catalonia Population

Nutritional status during gestation can influence mother and offspring metabolism. Undernutrition in pregnancy affects women in both western and developing countries, and it is associated with a high prevalence of chronic diseases in later life. The present work was conducted in the rabbit model, as a longitudinal study, to examine the effect of food restriction during early and mid-gestation, and re-feeding ad libitum until the end of pregnancy on metabolic status and body reserves of mother and, its association with development and metabolism of fetuses and female offspring to the juvenile stage. Little changes in live body weight (LBW), compensatory feed intake, similar body reserves, and metabolism were observed in dams. Placenta biometry and efficiency were slightly affected, but fetal BW and phenotype were not modified. However, hyperinsulinemia, insulin resistance, and hypertriglyceridemia were demonstrated in pre-term fetuses. In the juvenile period, these changes were not evidenced, and a similar pattern of growth and serum metabolic parameters in offspring of food-restricted mothers were found, except in serum aminotransferases levels, which increased. These were associated with higher liver fibrosis. Maternal food restriction in the early and mid-pregnancy followed by re-feeding in our rabbit model established a compensatory energy status in dams and alleviated potential long-term consequences in growth and metabolism in the offspring, even if fetal metabolism was altered. View Full-Text
Keywords: food restriction; mother; fetus; offspring; metabolism; liver; rabbit model food restriction; mother; fetus; offspring; metabolism; liver; rabbit model
►▼ Show Figures 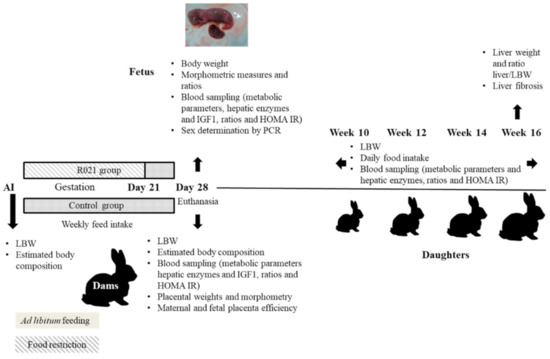