Editorial: A Review of Micronutrients and the Immune System—Working in Harmony to Reduce the Risk of Infection
Next Article in Special Issue

The present study was conducted as part of a comprehensive research project that investigated the sleep problems and daytime functioning in the general population [18]. This web-based cross-sectional questionnaire survey was conducted in April 2016. The participants were previously registered as research panel members of an established internet survey company and resided in all areas of Japan, stratified by age, sex, and region of residence. The study protocol was approved by the ethics committee of the Neuropsychiatric Research Institute, Tokyo, Japan. Informed consent was obtained from all participants via the survey website.
A total of 10,000 participants responded to the questionnaire. Participants were excluded based on the following criteria: out of the age range of 16–79 years (n = 3), average sleep duration out of the mean ± 2 standard deviation (SD) range (402 ± 197 min, n = 265), sleep midpoint out of the mean ± 2 SD range (3:37 AM ± 3:39, n = 240), and shift workers (n = 1144). Finally, 8348 participants (83.5%) were included in the analyses.
The following participant demographic information was obtained using the questionnaire: age, sex, body mass index (BMI), smoking status (“Do you currently smoke?”) and habitual alcohol intake (“Do you drink alcohol habitually?”), regular employment or school attendance (“Do you work or go to school regularly?”), frequency of working or going to school per week (“If yes, how many days a week do you work or go to school?”), family constitution (“Do you currently live alone or with your family?”), habitual exercise (“Do you exercise regularly: at least 30 min a day, 2 days a week, for 1 year?”) [19], and hypnotic medication use (“Do you currently take medicine to sleep?”). For evaluating the participants’ sleep habits, the following questions were included: weekday or days off bedtime (“What time do you usually go to bed on weekdays or days off?”), sleep onset latency (“How long does it usually take you to fall asleep on weekdays or days off?”), and wake-up time (“What time do you usually get up on weekdays or days off?”). The Japanese version of the Insomnia Severity Index (ISI) for assessing insomnia severity [20,21] and the Japanese version of the Hospital Anxiety and Depression Scale (HADS) for determining the severity of depression and anxiety [22,23,24] {Fulda, 2008 #117} were also included in the questionnaire.
The questionnaire also included four questions on the participants’ eating habits: frequency of eating dinner per week, time of last meal, frequency of nighttime food intake (“How many days per week do you eat anything between dinner and the next morning, such as a night snack or light meal?”), and percentage of nighttime food calories from the total daily calories (“Considering your total calories for the day as 100%, how many calories do you take after dinner up to the next morning?”). The questionnaire was used to identify the participants who met the two main items of the proposed diagnostic criteria of NES by Allison et al. [7]. Based on the A1 criterion (evening hyperphagia) of “At least 25% of the daily food is consumed after the evening meal,” participants who had dinner as well as snacked between dinner and the next morning and consumed at least 25% of their daily calories between dinner and bedtime every day were identified as having met the A1 criterion and defined as having evening hyperphagia. They included some participants who also met the A2 criterion [17]. According to the A2 criterion (nocturnal ingestion) of “At least two eating episodes per week occur upon awakening during the night,” participants whose last episodes of eating/drinking were later than their sleep onset time at least twice a week (both workdays and days off) were identified. The identified participants who only fulfilled the A2 criterion were defined as having nocturnal ingestion [17].
For the sleep variables, the sleep onset time was first calculated using bedtime and sleep onset latency. Next, the difference between sleep onset time and wake-up time was defined as sleep duration, while the midpoint between the sleep onset and wake-up times was defined as the sleep midpoint. Both parameters were assessed on weekdays and days off. The average sleep time was calculated using the following formula: ((sleep duration on weekdays × x + (sleep duration on days off × {7 − x}))/7, where x is the number of working days or school days in the week. Similarly, the average sleep midpoint was calculated using the following formula: ((sleep midpoint on weekdays × x) + (sleep midpoint on days off × {7 − x}))/7. Additionally, the absolute difference in sleep midpoint between weekdays and days off was calculated and defined as the absolute social jet lag [25].

In the present study, we examined factors associated with the two main constituent symptoms of NES, evening hyperphagia and nocturnal ingestion. Our findings showed that participants with either of these core symptoms exhibited higher anxiety and depression scores than those without NES. Evening hyperphagia was associated with shorter habitual sleep duration and delayed sleep-wake schedules, while nocturnal ingestion was linked to longer habitual sleep duration and earlier sleep-wake schedules, suggesting different pathophysiological backgrounds between the two symptoms. These findings are important for devising therapeutic interventions for NES, such as the improvement of sleep-wake rhythms and sleep duration for severe evening hyperphagia. Moreover, the relationship between NES and sleep habits should be examined in clinical populations to confirm the significance of sleep schedule in the mechanism of NES. Furthermore, future longitudinal studies are warranted to clarify the impact of NES on physical and mental health.

The study was conducted according to the guidelines of the Declaration of Helsinki. The protocol of this study was reviewed and approved by the ethics committee of Tokyo Medical University (No. 3307).

Informed consent was obtained from all participants via the survey website.

The data will be shared on reasonable request to the corresponding author. 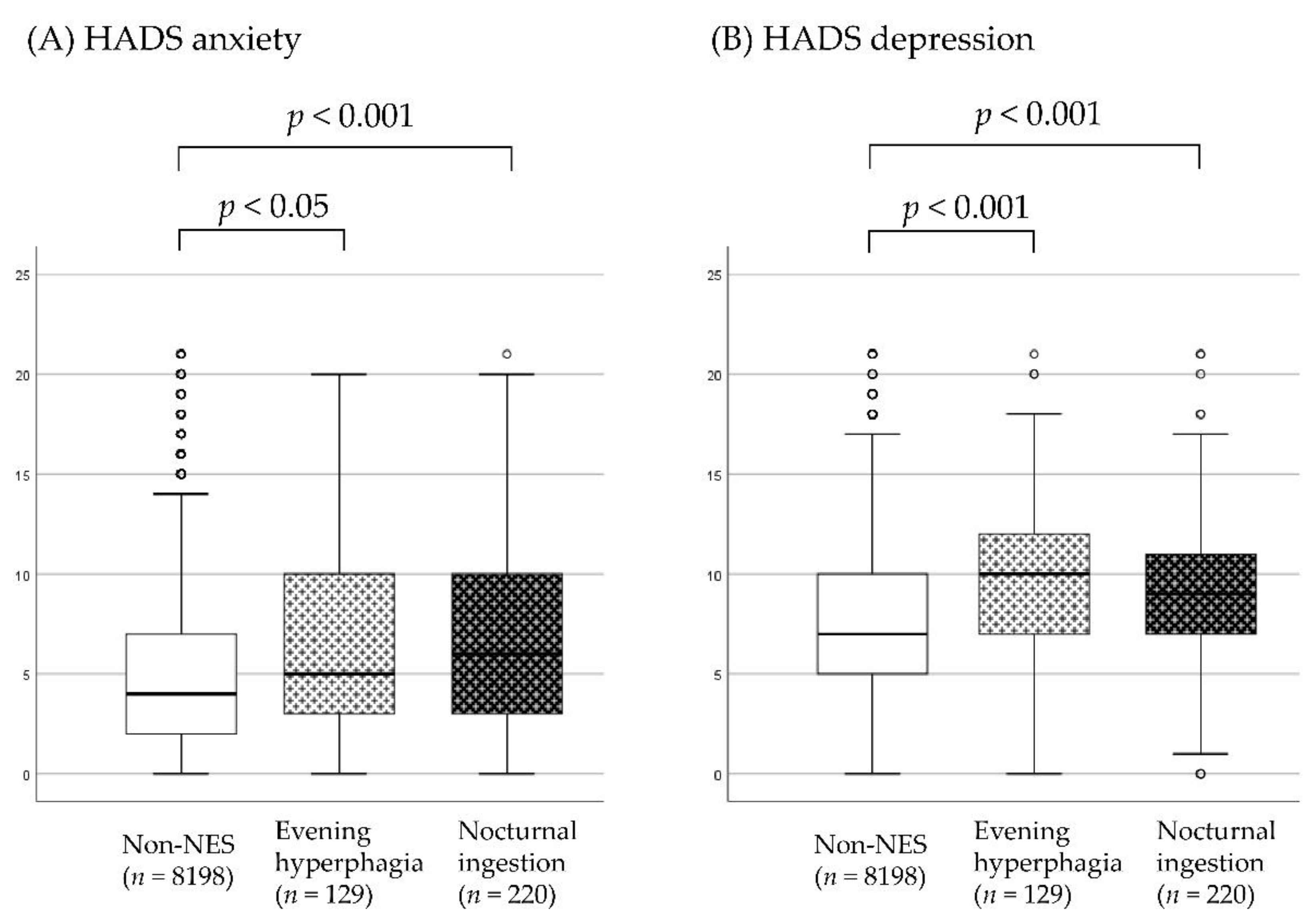