Change in Micronutrient Intake among People with Relapsing-Remitting Multiple Sclerosis Adapting the Swank and Wahls Diets: An Analysis of Weighed Food Records

Patients with multiple sclerosis (MS) are characterized by, among other symptoms, impaired functional capacity and walking difficulties. Polyunsaturated fatty acids (PUFAs) have been found to improve MS patients’ clinical outcomes; however, their effect on other parameters associated with daily living activities need further investigation. The current study aimed to examine the effect of a 24-month supplementation with a cocktail dietary supplement formula, the NeuroaspisTM PLP10, containing specific omega-3 and omega-6 PUFAs and specific antioxidant vitamins on gait and functional capacity parameters of patients with MS. Fifty-one relapsing-remitting MS (RRMS) patients with low disability scores (age: 38.4 ± 7.1 years; 30 female) were randomized 1:1 to receive either a 20 mL daily dose of the dietary formula containing a mixture of omega-3 and omega-6 PUFAs (12,150 mg), vitamin A (0.6 mg), vitamin E (22 mg), and γ-tocopherol (760 mg), the OMEGA group (n = 27; age: 39 ± 8.3 years), or 20 mL placebo containing virgin olive oil, the placebo group (n = 24; age: 37.8 ± 5.3 years). The mean ± SD (standard deviation) Expanded Disability Status Scale (EDSS) score for the placebo group was 2.36 and for the OMEGA group 2.22. All enrolled patients in the study were on Interferon-β treatment. Spatiotemporal gait parameters and gait deviation index (GDI) were assessed using a motion capture system. Functional capacity was examined using various functional tests such as the six-minute walk test (6MWT), two sit-to-stand tests (STS-5 and STS-60), and the Timed Up and Go test (TUG). Isometric handgrip strength was assessed by a dynamometer. Leg strength was assessed using an isokinetic dynamometer. All assessments were performed at baseline and at 12 and 24 months of supplementation. A total of 36 patients completed the study (18 from each group). Six patients from the placebo group and 9 patients from the OMEGA group dropped out from the study or were lost to follow-up. The dietary supplement significantly improved the single support time and the step and stride time (p < 0.05), both spatiotemporal gait parameters. In addition, while GDI of the placebo group decreased by about 10% at 24 months, it increased by about 4% in the OMEGA group (p < 0.05). Moreover, performance in the STS-60 test improved in the OMEGA group (p < 0.05) and there was a tendency for improvement in the 6MWT and TUG tests. Long-term supplementation with high dosages of omega-3 and omega-6 PUFAs (compared to previous published clinical studies using PUFAs) and specific antioxidant vitamins improved some functional capacity and gait parameters in RRMS patients. View Full-Text
Keywords: PUFA; relapsing remitting multiple sclerosis; gait; NeuroaspisTM plp10; functional capacity PUFA; relapsing remitting multiple sclerosis; gait; NeuroaspisTM plp10; functional capacity
►▼ Show Figures 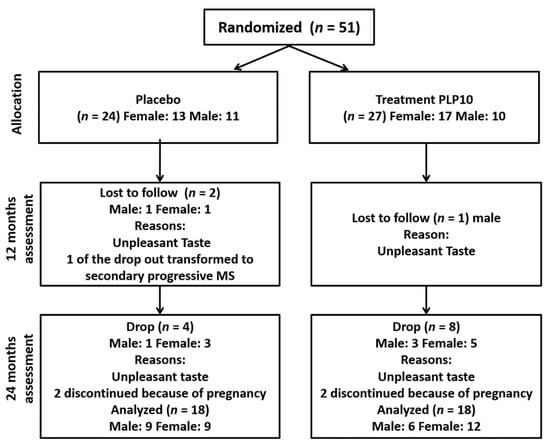