Identification of Dish-Based Dietary Patterns for Breakfast, Lunch, and Dinner and Their Diet Quality in Japanese Adults
Previous Article in Special Issue

Effect of an Enriched Protein Drink on Muscle Mass and Glycemic Control during Combined Lifestyle Intervention in Older Adults with Obesity and Type 2 Diabetes: A Double-Blind RCT

Nutritional Status and Indicators of 2-Year Mortality and Re-Hospitalizations: Experience from the Internal Clinic Departments in Tertiary Hospital in Croatia

We aimed to provide insight into nutritional and clinical indicators of malnutrition risk and their influence on two-year mortality and re-hospitalization rate among patients hospitalized in internal clinic departments in the tertiary hospital in Croatia. Initially, data on 346 participants were obtained, while 218 of them where followed-up two years later. At baseline, the majority of participants were old and polymorbid (62.1% suffered from arterial hypertension, 29.5% from cancer, and 29.2% from diabetes). Even apparently presenting with satisfying anthropometric indices, 38.4% of them were at-risk for malnutrition when screened with the Nutritional Risk Screening-2002 (NRS-2002) questionnaire (NRS-2002 ≥ 3). More importantly, only 15.3% of all participants were prescribed an oral nutritional supplement during hospitalization. Those that were at-risk for malnutrition suffered significantly more often from cancer (54.9% vs. 20.6%; p < 0.001) and died more often in the follow-up period (42.7% vs. 23.5%; p < 0.003). Their anthropometric indices were generally normal and contradictory 46.3% were overweight and obese (body mass index (BMI) > 25 kg/m2). Only 36.6% of nutritionally endangered participants used an oral supplement in the follow-up period. NRS-2002 ≥ 3 correlated with anthropometric indices, glomerular filtration rate, age, and length of the initial hospital stay. Unlike other studies, NRS-2002 ≥ 3 was not an independent predictor of mortality and re-hospitalizations; other clinical, rather than nutritional parameters proved to be better predictors. Patients in our hospital are neither adequately nutritionally assessed nor managed. There is an urgent need to develop strategies to prevent, identify, and treat malnutrition in our hospital and post-discharge. View Full-Text
Keywords: malnutrition; NRS-2002; internal medicine; elderly; mortality; re-hospitalization; oral nutritional supplement malnutrition; NRS-2002; internal medicine; elderly; mortality; re-hospitalization; oral nutritional supplement
►▼ Show Figures 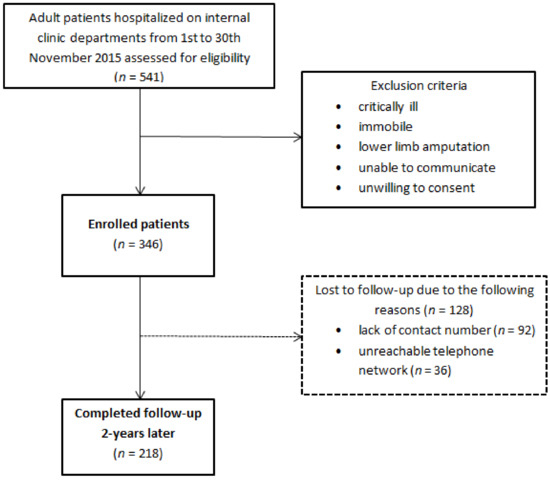