Chronic kidney disease (CKD) affects about 14% of the United States population [1]. Individuals with CKD disease have a high risk of cardiovascular morbidity and mortality, and this risk increases with CKD severity [2]. In addition to the adverse clinical course, CKD care is expensive and consumes a disproportionate amount of health care dollars [3]. Treatment of CKD has historically focused on addressing traditional risk factors such as hypertension, proteinuria, and, in diabetics, blood glucose control [4]. While these treatments can delay disease progression, many patients with CKD ultimately progress to end-stage kidney disease and require renal replacement therapy.
Oxidative stress—a state of imbalance between the generation and degradation of free radical oxidant compounds, including reactive oxygen species (ROS) and reactive nitrogen species (RNS)—is increasingly recognized as an important factor in the initiation and progression of chronic kidney disease [5,6,7]. Commonly generated endogenous ROS and RNS include the superoxide (O2.−), hydroxyl (OH.), nitric oxide (NO.), and nitrogen dioxide (NO2.) radicals. At physiologic concentrations, ROS and RNS fulfill homeostatic roles such as cell signaling and the synthesis of some cell structures, and are used in phagocytic cell defense against pathogens [8]. The pathophysiologic effects occur when there is an imbalance between oxidation and reduction—an altered redox state in which excess free radicals react with other molecules, including lipids, proteins, and nuclear DNA. Lipid peroxidation damages cell membranes and lipoproteins, leads to formation of toxic reactive aldehydes, and promotes further lipid peroxidation, ultimately affecting a large number of lipid molecules [8]. When ROS react with proteins, they may induce conformational changes that render the proteins partially or completely nonfunctional [8]. ROS reaction with DNA may lead to mutagenesis, disruption of the cell cycle, and induction of apoptosis [8,9]. This review will focus on oxidative stress in chronic kidney disease, and sulforaphane, a bioactivator of the NRF2 pathway, as a potential therapy to mitigate this stress.

2. Sources of Oxidative Stress in the Kidney

In the kidney (as in other tissues), ROS and RNS may be produced via a variety of mechanisms. The kidneys (in particular, the proximal tubules) require a significant amount of energy in the form of adenosine tri-phosphate (ATP) in order to achieve solute reabsorption, protein synthesis and degradation, and regulation of glomerular filtration required to maintain homeostasis [10]. Mitochondria are the cellular organelles that provide the major source of ATP via the electron transport chain. In this reaction, electrons are transferred between a series of electron donors and acceptors, ultimately to oxygen, which is then reduced to water [10,11]. This process, called oxidative phosphorylation, generates energy and drives the generation of ATP via an ATP synthase [10]. During electron transfer, some of the reactions may be incomplete, leading to the premature leakage of free electrons which can interact with oxygen and generate excess ROS [12]. Similar to lipids, proteins, and nuclear DNA, mitochondrial DNA is also susceptible to oxidative damage. This may result in impaired transcription of mRNA and post-translational modification of mitochondrial proteins, including oxidative phosphorylation enzymes and proteins involved in antioxidant defense, ultimately resulting in both ROS generation and compromised ATP production [10]. Mitochondrial dysfunction has been shown to play a major role in progression of renal diseases, including acute kidney injury and diabetic nephropathy [13].
NADPH (nicotinamide adenine dinucleotide) oxidases (NOX) are another potential source of oxidative stress. NOX catalyze the oxidation of NADPH or NADH and produce the ROS species O2− and H2O2, which react with iron ions Fe3+ and Fe2+, respectively, in the Haber–Weiss reaction, resulting in the net generation of •OH and OH− radicals [14]. At low basal activity, NOX generate ROS that have physiologic functions in cell proliferation, metabolism, and death. However, under conditions such as activated renin angiotensin system (RAS) or a high-salt diet, NOX activity in the kidney is upregulated [15] and can lead to overproduction of H2O2 and other free radicals with deleterious consequences.
Endothelial nitric oxide synthase (eNOS) produces nitric oxide (NO) via the oxidation of L-arginine to L-citrulline in a process requiring tetrahydrobiopterin (BH4) as a cofactor [16]. NO has a critical role in vascular biology by mediating a cell signaling cascade that leads to vasodilation, thereby lowering blood pressure. The bioavailability of NO can be increased by polyphenols found in plant-based foods that can augment eNOS expression, as well as by nitrates found in high concentrations in many leafy green vegetables and beets that serve as an eNOS-independent source of NO [17]. Under pathophysiologic conditions, eNOS can act as another source of free radicals by generating O2.− instead of NO in a process known as eNOS uncoupling [18]. The importance of eNOS in kidney health is illustrated in a study showing that deletion of eNOS in the mouse resulted in progressive renal abnormalities, including tubular apoptosis and necrosis, and glomerular and tubular scarring [19].
Other enzymatic sources of free radicals include myeloperoxidase (MPO), which normally catalyzes the H2O2-mediated oxidation of halide ions, but under pathophysiologic conditions oxidizes other substrates and mediates tissue damage [20]. In a renal ablation model of CKD, MPO knockout mice displayed attenuated glomerular injury and decreased expression of markers of fibrosis and inflammation [21], suggesting that increased activity of MPO may contribute to kidney disease progression. Xanthine oxidase, in the process of generating uric acid, generates oxidants such as O2.− and H2O2 [22]. In addition, there is evidence supporting the role of uric acid in hypertension [23] and CKD progression, in part through its direct role activating NADPH oxidase [24,25].
Free radicals and oxidative stress may also be generated via exogenous sources such as radiation, xenobiotic compounds, cigarette smoke, and environmental or industrial toxins such as heavy metals or solvents [7,26].
To combat oxidative stress and prevent pathophysiologic alterations in the redox state, organisms have developed a number of antioxidant defenses. Antioxidants inhibit the formation of free radicals or mitigate their damaging effects by: (1) acting as an alternative substrate for oxidation, thereby preventing an oxidation reaction which would lead to the formation of free radicals, (2) directly scavenging free radicals, or (3) indirectly preventing the development of oxidant compounds by either upregulating antioxidant defenses or inhibiting free radical production [27]. These antioxidants may be endogenous or exogenous from food sources [9], and can be enzymatic or nonenzymatic. The enzymatic antioxidants may be primary and constitutively acting such as superoxide dismutase (SOD), catalase (CAT), and peroxidase. Superoxide dismutase catalyzes the reaction of O2− to H2O2 and O2 [28]. The H2O2 may be subsequently converted to oxygen and water via CAT or via a peroxidase such as glutathione peroxidase (GPx), used to oxidize another substance such as gluthathione [GSH] whose thiol groups allow them to donate electrons to detoxify the free radicals [28]. Alternatively, oxidative stress may alter the activity of transcription factors mediated by antioxidant responsive elements (AREs) in promoter regions of genes that combat oxidative stress [29]. The nuclear factor erythroid 2 related factor 2 (NRF2) is one such critical transcription factor that is discussed in more detail below.

3. Evidence That Oxidative Stress Is Operant in CKD

There are several lines of evidence establishing a link between oxidative stress and CKD. Some studies have shown that individuals with CKD have elevated markers of oxidative injury [30,31,32,33] that are, depending on the marker evaluated, proportional to the degree of kidney dysfunction [30,31,33]. Mechanistically, mitochondrial dysfunction, as discussed above, is an increasingly recognized contributor, particularly in diabetic nephropathy, in which mitochondrial ROS production exceeds the local antioxidant capacity [13,34]. Evidence suggests that mitochondrial dysfunction may also play a role in other kidney diseases, including IgA nephropathy, membranous nephropathy, and polycystic kidney disease [35]. All of the mechanisms discussed above have been shown to be present in CKD, namely upregulated NOX activity, eNOS uncoupling, and pro-oxidative activities of myeloperoxidase and xanthine oxidase [7,12]. Moreover, a number of studies showed when levels of antioxidant agents such as SOD, CAT, GPx/glutathione, and, as discussed in more detail below, NRF-2 are reduced, the harmful effects of oxidation and generation of ROS cannot be appropriately mitigated [12].

In summary, there is mounting supporting evidence that SFN may have therapeutic potential in kidney disease by stimulating the NRF2 pathway (Figure 2). SFN is currently in clinical trials for cancer of the breast, lung, and prostate, as well as autism and schizophrenia (Clinicaltrials.gov). However, currently no clinical study has been performed to assess the effect of SFN in CKD. As SFN and its metabolites are cleared by the kidney [144], safety and efficacy should first be established in patients with kidney disease, particularly in those with more advanced stages of CKD. Once established, large, randomized, placebo-controlled trials are needed to determine the effect of SFN on long-term outcomes such as disease progression and mortality in patients with CKD, and whether the effect is modified by genetics in a precision medicine approach.

S.E.L. and T.H.L. designed and wrote the review. All authors have read and agreed to the published version of the manuscript. 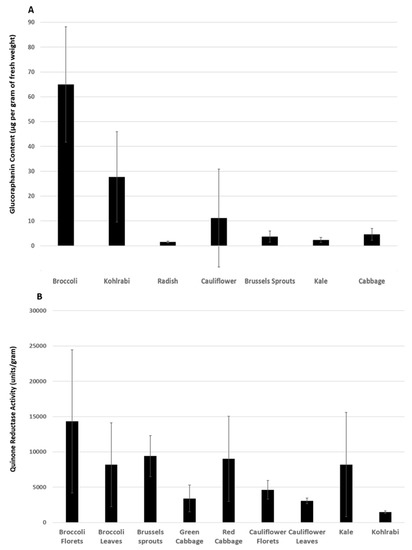 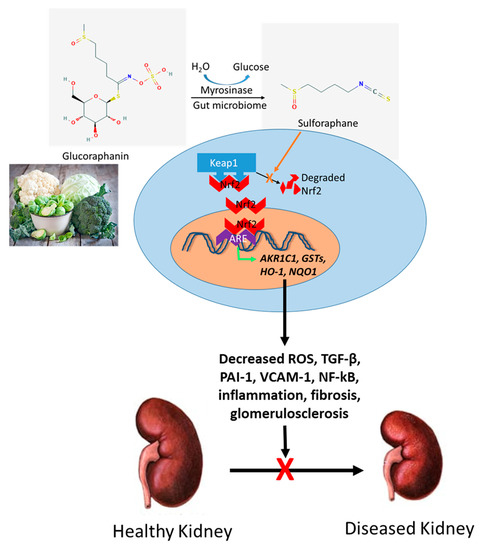 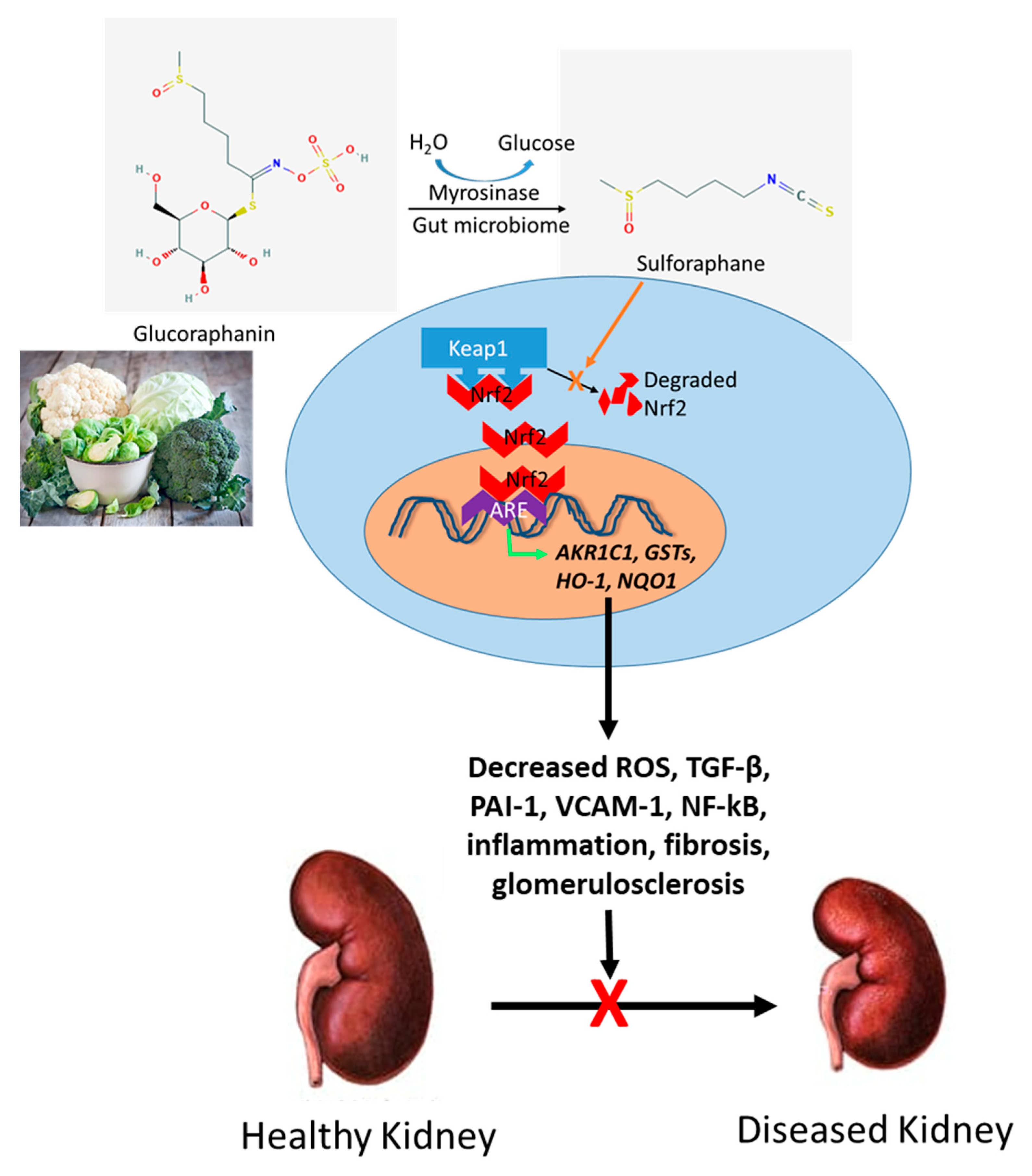