Chronic kidney disease (CKD) results in the deterioration of renal function and can lead to end-stage renal disease (ESRD). CKD has a significant impact on patients’ prognosis and quality of life. In recent years, the prevalence of CKD has increased, with global estimates of 700 million patients with CKD and 1.2 million deaths due to CKD in 2017 [1]. Accordingly, there is an urgent need to address this growing public health concern. Several measures have been proposed to improve the prognosis of patients with CKD, including modification of diet and lifestyle. High salt intake is among the top dietary risk factors. Salt reduction is also beneficial for hypertension in cardiovascular diseases (CVD) [2]. Salt restriction is one such measure that has been reported to significantly decrease blood pressure in CKD patients [3]. A previous meta-analysis reported that salt restriction in patients with CKD decreased the amount of proteinuria [4]. Behavioral changes in patient lifestyles are needed to achieve salt restriction, and patient education is mandatory to support this. Generally, patients with CKD and a high risk for ESRD have fewer opportunities to receive suitable diet guidance due to several barriers, such as inadequate training, limited time of health providers, and the reluctance of patients [5]. Inpatient educational programs for patients with CKD may alleviate the progression of renal disease [6]. However, the type of educational program that is effective remains unclear. Incidentally, patients with CKD tend to have taste disturbance due to uremia, deficiency of zinc, peripheral nervous system disorder, and polypharmacy [7]. We hypothesized that educational hospitalization with enhanced salt reduction guidance would reduce the risk of ESRD. The aim of this study was, therefore, to elucidate whether our educational program, which included the evaluation of gustatory threshold for salty taste, significantly reduced the risk of ESRD.

Patients aged ≥20 years who were admitted to our hospital for the purpose of education on CKD between 2012 and 2019 were included in this study. Patients who could not be followed up with 1 year after the admission or died within 3 months after admission, cases with deteriorating general condition due to complications after admission, and patients with severe dementia were excluded. The definition of CKD was an estimated glomerular filtration rate (eGFR) less than 60 mL/min/1.73 m2 [8]. The new program, which included the evaluation of the gustatory threshold for salty taste in our facility, commenced in October 2016, and the gustatory threshold was not evaluated before October 2016. Patients admitted to our hospital after October 2016 were allocated to Group A, whereas those admitted to our hospital before October 2016 were allocated to Group B (as historical controls). Regarding Group A, the gustatory threshold for salty taste, blood pressure, and daily salt intake were evaluated upon admission and at 3 months after admission.
The data of Groups A and B were compared to elucidate whether intensive instructions regarding salt restriction based on the gustatory threshold for salty taste had a significant effect on the deterioration of renal function. Dialysis induction rates within 1 year and differences in the ΔeGFR at 6 months before and after admission were evaluated. The ΔeGFR was calculated based on the difference between eGFR at 6 months after admission and eGFR on admission, and divided by 6 to obtain the monthly rate. If dialysis was initiated in patients at 3 to 6 months after admission, eGFR just before the initiation of dialysis was used as a substitute for eGFR at 6 months after admission and divided by the number of months. The period for educational hospitalization was 1 week, and the educational program consisted of an evaluation of the risk factors for CKD progression, drug adjustments, diet and exercise guidance, and an introduction of renal replacement therapies. Education was carried out by multiple health professionals, such as doctors, nurses, pharmacists, dietitians, and physiotherapists. Dietitians provided a dietary instruction for ≥30 min, and the gustatory threshold for salty taste was examined at that time.

Categorical variables are presented as number (%). Continuous variables are expressed as mean ± standard deviations. Non-normally distributed data are presented as median values with interquartile ranges. JMP 15 software (SAS Institute Inc., Cary, NC, USA) was used to perform statistical analyses. An unpaired or paired t-test and Mann–Whitney U-test (limited for nonparametric analyses) were used to compare continuous variables, and the chi-square test was used for categorical variables. Propensity score matching with a caliper coefficient set at 0.2 was performed to match Group A and B. To calculate the propensity score, age, sex, body mass index (BMI), diabetes history, eGFR, hemoglobin, systolic blood pressure, and degree of proteinuria were used as parameters because of their relevance to CKD treatment and data availability. Univariate and multivariate logistic regression analyses were also performed for both groups.
This study was approved by the ethics committee of the Nagasaki University Hospital (Nagasaki, Japan) (16020808-6) and performed according to the 1964 Declaration of Helsinki and its later amendments. Written informed consent was obtained from all patients in Group A. Patients in Group B were informed of the experimental procedures, but consent was not obtained given that their data were used as a historical control and collected from medical records. Included patients were anonymized. The ethics committee approved the waiver for consent.

In total, 374 patients were admitted to our hospital from 2012 to 2019 for the purpose of alleviating CKD progression. Renal replacement therapy was initiated in 34 patients within three months after admission. Two patients died, 11 patients’ general condition deteriorated due to complications during admission, and 47 patients were lost to follow-up at one year. Among the patients who were admitted to our hospital after October 2016, two patients declined consent, and one patient presented with severe dementia, precluding evaluation of the gustatory threshold for salty taste. These patients were excluded, and a final total of 277 patients were included in this study (Group A, n = 141 and Group B, n = 136) (Figure 1).
The patients’ mean age was 69.2 ± 12.2, men comprised 62.1% of patients, the mean BMI was 23.4 ± 4.3 kg/m2, and 46.9% of patients had a history of diabetes. The proportions of patients based on CKD stage were G3 (18.0%), G4 (49.1%), and G5 (32.9%). Compared with Group B (historical controls), Group A was significantly younger and had higher BMI and eGFR at admission (Table 1). Given that age and BMI are strongly associated with eGFR, we adjusted for these factors in all analyses performed. The proportions of etiologies of CKD were as follows: diabetic nephropathy, 35.7%; benign nephrosclerosis, 31.0%; chronic glomerulonephritis, 15.5%; and autosomal dominant polycystic kidney disease, 4.3%. No significant differences between groups were observed (Table 1). Compared to Group B, Group A had higher administration rates of calcium channel blockers and glucagon-like peptide-1 (GLP-1) agonists, and lower administration rates of phosphate binder, ion-exchange resin, and carbonaceous oral adsorbents (Table S1).
The gustatory threshold for salty taste at three months after admission was improved relative to that at admission. Salt intake and blood pressure were significantly lower at three months after admission relative to that at admission (Table 2). The median (interquartile range) of urinary sodium (mEq/L)/urinary creatinine (mg/dL) was 1.01 (0.70–1.49) on admission and 0.97 (0.51–1.40) three months after admission.
The ΔeGFR from admission to six months after admission was significantly greater in Group A than in Group B (A: 1.05 mL/min/1.73 m2/month, B: 0.55 mL/min/1.73 m2/month; p = 0.02) (Figure 2). The hemodialysis induction rate within one year after admission was superior in Group A than in Group B (A: 8.5%, B: 15.5%; p = 0.001) (Figure 3).
Propensity score matching was performed, and 105 patients were extracted from each group. Score-matched patients’ backgrounds are shown in the Supplemental Material (Table S2). In addition to the eGFR, there was no significant difference between Group A and Group B in terms of CKD stages (Group A; G3: 16.2%, G4: 51.4%, and G5: 32.4%, Group B; G3: 14.3%, G4: 52.4%, G5: 33.3%). Despite performing propensity score matching, the ΔeGFR results and hemodialysis induction rate exhibited similar tendencies (Table 3).
Univariate and multivariate logistic regression analyses revealed that the rate of hemodialysis initiation within one year was significantly lower in Group A than in Group B (Table 4). Gustatory threshold testing for salty taste was only conducted in Group A, revealing that the mean threshold for salty taste exceeded the normal range.
Stratified analysis by CKD stage revealed that relative to Group B, Group A was superior based on the ΔeGFR in patients with CKD stage 4 and dialysis initiation rates within one year after admission in patients with CKD stage 5 (Table S3). During the observational period, we did not detect any occurrence of severe dehydration or hyperkalemia.

Educational hospitalization with enhanced salt reduction guidance may reduce the risk of ESRD, even in patients with advanced CKD. However, the effects of inpatient guidance and salt restriction on renal outcomes in patients with CKD should be investigated more thoroughly in the future.

The following are available online at https://www.mdpi.com/2072-6643/12/9/2703/s1, Table S1: Administration of drugs in the two groups. Table S2: Characteristics of the propensity score-matched cohort; Table S3: Stratified analysis according to the CKD stage.

We are grateful to Yuko Shoji and Nina Sato for creating the databases. 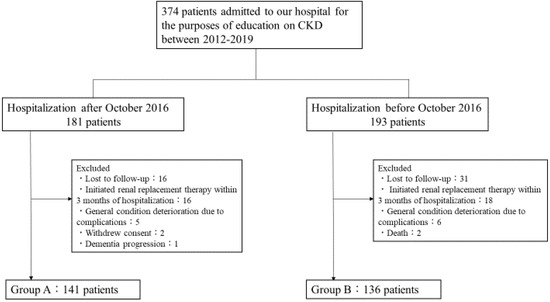