Diet Quality and Health Service Utilization for Depression: A Prospective Investigation of Adults in Alberta’s Tomorrow Project
Next Article in Special Issue

Nutritional Status and Oral Frailty: A Community Based Study
Previous Article in Journal

Familial hypercholesterolemia (FH) is the most common inherited metabolic disease caused by mutations of the genes involved in low-density lipoprotein cholesterol (LDL-C) catabolism and related with premature coronary heart disease (CHD) [1,2,3]. Considering the LDL-C reduction (over 50%) needed for the prevention against the development of cardiovascular disease (CVD) in such patients, lipid-lowering drugs are considered as their primary cardiovascular (CV) prevention therapy [4,5,6]. On the other hand, dietary interventions, such as the manipulation of fat content, increasing dietary intake of soluble fiber and increasing the intake of certain dietary components (i.e., soy protein, plant sterols and stanols, omega-3 fatty acids) are recommended in patients with FH who cannot start (i.e., children) or tolerate lipid-lowering therapy (i.e., statin intolerant patients) [6,7]. Nevertheless, the majority of these interventions have not been adequately investigated in such individuals and consensus has yet to be reached on the most appropriate dietary treatment for FH [8].
The aim of this work was to assess the CV efficacy of the currently recommended cholesterol-lowering diet and other forms of dietary intervention in children and adults diagnosed with FH.

The present meta-analysis has been conducted according to the Preferred Reporting Items for Systematic Reviews and Meta-Analyses (PRISMA) (Table A1). Published randomized controlled trials (RCTs) were included in the present meta-analysis. Trials using quasi-randomization methods were alternatively included in case of sufficient evidence showing that treatment and comparison groups were comparable in terms of clinical and nutritional status.

Studies including children and adults with FH (alternative named as inherited dyslipidemia IIa) were considered eligible. Trials including patients with FH along with others not fulfilling the criteria of FH diagnosis were only included if the FH group was well defined and the results for these subjects were available.

Cholesterol-lowering diet or any other dietary intervention aimed at serum total cholesterol (TC) or LDL-C reduction, for at least 3 weeks. RCTs comparing dietary treatment as a control with lipid-lowering drugs were excluded. However, we included those trials in which control and treatment groups differed only in diet. Trials comparing one form of modified dietary intake with another form of dietary intake were included in case of a head-to-head comparison.

At the initial stage of review and each update, two authors independently selected the trials which were eligible for inclusion in the present meta-analysis.

Two review authors (FB and DP) independently extracted data using an extraction form recording publication details, study population, randomization, allocation concealment, blinding, interventions and results of each trial. Any differences between them were resolved by consulting the other review authors (TN and EL).
Due to the different dietary interventions recommended in patients with FH, the included RCTs were divided into the following comparisons:
Outcome data were grouped into those measured at up to one, three, six, twelve months and annually thereafter. In case of outcomes recorded at other time periods (i.e., 2, 4, 6, 8 weeks), the authors examined them as well. Generally, a 4-week period is adequate to investigate the effects of dietary interventions on lipids. In order to assess how these effects were maintained, analyses at longer periods were preferred. For the primary outcomes, analyzing the results of longer follow-up would have been necessary.
In case of duplicate trials, we included the trial with the longest follow-up.

2.5. Assessment of Risk of Bias in Included Studies

We assessed the bias risk (low, unclear or high) of the following parameters: (i) sequence generation, (ii) allocation concealment, (iii) blinding (of participants, personnel and outcome assessors), (iv) incomplete outcome data addressed, (v) free of selective outcome reporting and (vi) free of other bias. Overall, trials were considered as high-risk if the majority of the evaluated parameters were considered at high or unclear bias risk. Any differences between FB and DP were resolved by consultation.

No data were available regarding the incidence and mortality of CVD. In case of available data for these outcomes, the odds ratio (OR) and the corresponding 95% confidence intervals (CIs) would have been estimated.
Continuous outcomes were analyzed using the mean difference (MD) and associated 95% CIs. In case of different measurement scales, the standardized mean difference (SMD) was calculated. When only the standard error (SE) was available, it was converted to SD by being multiplied with the square root of the participant number.

In order to allow an intention-to-treat analysis, the authors would have sought data on the number of participants with each outcome event, by allocated treatment group, irrespective of compliance and whether or not the participant was later thought to be ineligible or otherwise excluded from treatment or follow up.
RCTs not reporting the results of the FH subgroup have not been included in the present work. Although the authors were requested to supply this lacking data, no response was received at the time of writing this review.

Publication bias was assessed with a funnel plot. Due to the lack of data on the primary outcomes, any secondary outcome reported by three or more trials was used for the funnel plot construction. Outcome reporting bias was assessed by comparing the original protocols of the included trials with the final published manuscripts. In case that the protocols were unavailable, the outcomes described in the Methods section of the final manuscripts were compared with the Results section to identify any outcomes not being reported. Finally, our clinical knowledge would help us identify any outcomes expected to be measured, but they were not reported.

2.9. Subgroup Analysis and Investigation of Heterogeneity

In case of observed statistically significant heterogeneity, a random-effect meta-analysis was performed. Otherwise, a fixed-effect model was used.

As shown in Figure 1, of the 1430 references initially identified from the electronic and manual search studies, a total of 17 RCTs were included in the present meta-analysis.

The design of the RCTs included in the present meta-analysis, along with their samples and the investigated dietary interventions are demonstrated in Table 1. The majority of the included studies were double-blind, placebo-controlled and randomized with a cross-over design [7,10,11,12,13,14,15]. Their duration ranged from 3 to 13 weeks and their samples from 10 to 62 subjects. Seven trials enrolled children fulfilling the criteria of FH [10,12,14,16,17,18,19]. Among the rest studies including adults with FH, in 8 RCTs the subjects were also treated with lipid-lowering drugs [11,13,15,20,21,22,23,24].
We report on 8 dietary interventions separately.

The included trials had either a low or unclear bias risk for most of the parameters used for risk assessment (Figure 2).

No selective reporting was noted in the included RCTs.

Only 11 RCTs presented data in such way that the preferred method of analysis could be conducted [10,11,12,13,14,15,16,17,18,20,22]. However, these trials did not provide data for all of the assessed outcomes. Furthermore, no RCT reported on the incidence or mortality of total CVD, CHD, stroke and PAD.

Cholesterol-Lowering Diets Differing with Regard to Polyunsaturated:Saturated Values

No robust conclusions can be reached about the impact of a cholesterol-lowering diet or any of the other dietary interventions proposed for FH patients on CVD incidence or mortality. Available RCTs confirm that the addition of plant sterols or stanols to low-fat diet has a cholesterol-lowering effect on such individuals. Considering their beneficial effect on lifetime LDL-C burden, phytosterols should be recommended in FH patients, especially in the children. On the other hand, supplementation with omega-3 fatty acids effectively reduces TG and might have a role in those exhibiting an insulin-resistant phenotype. Additional RCTs are needed to investigate the effectiveness of cholesterol-lowering diet and the addition of soy protein and dietary fibers to a cholesterol-lowering diet in patients with FH. Until then, physicians should keep in mind that diet aiming at weight reduction or control should be an integral part of a holistic approach aiming at the improvement of lifestyle CV risk factors. 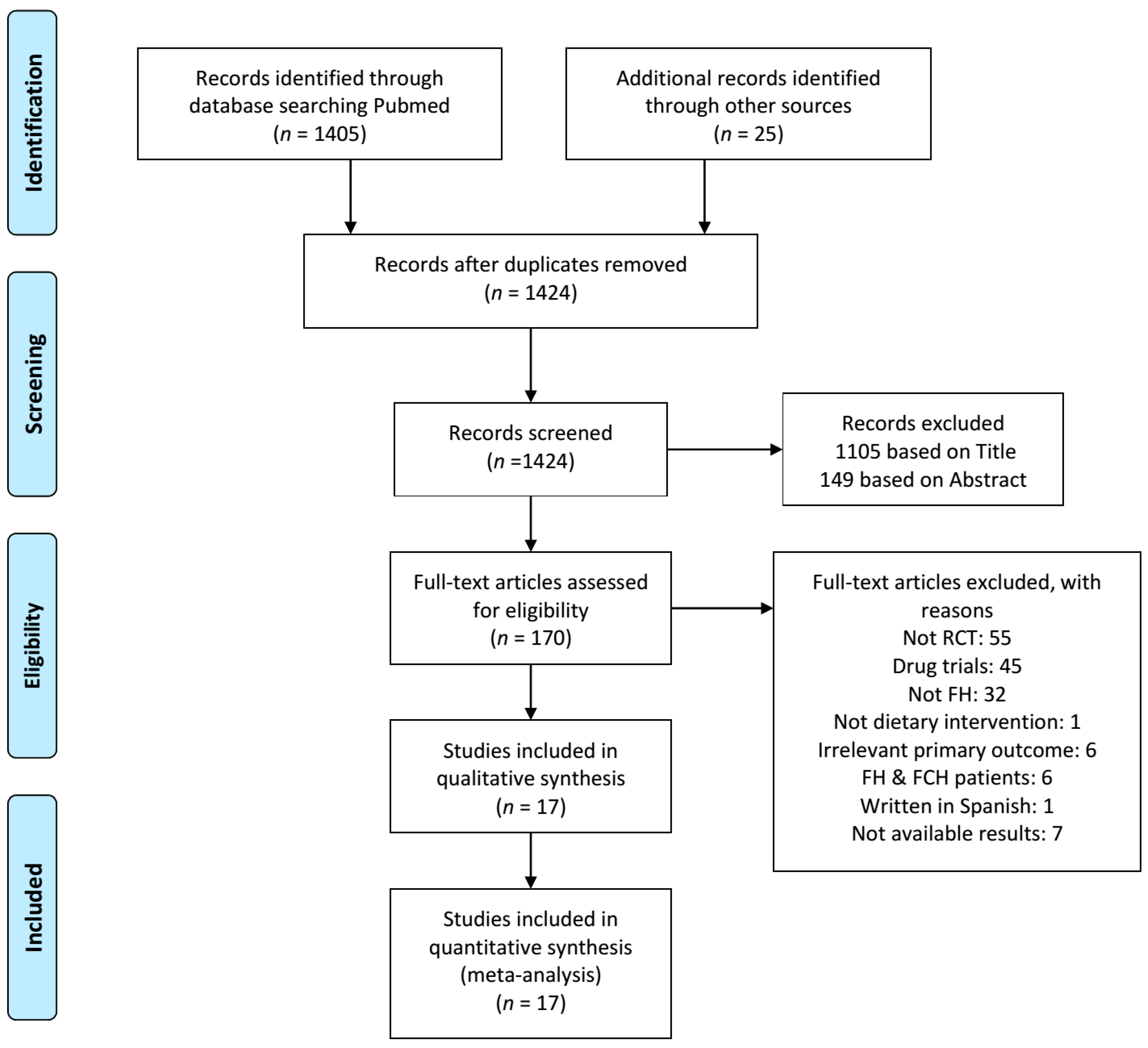 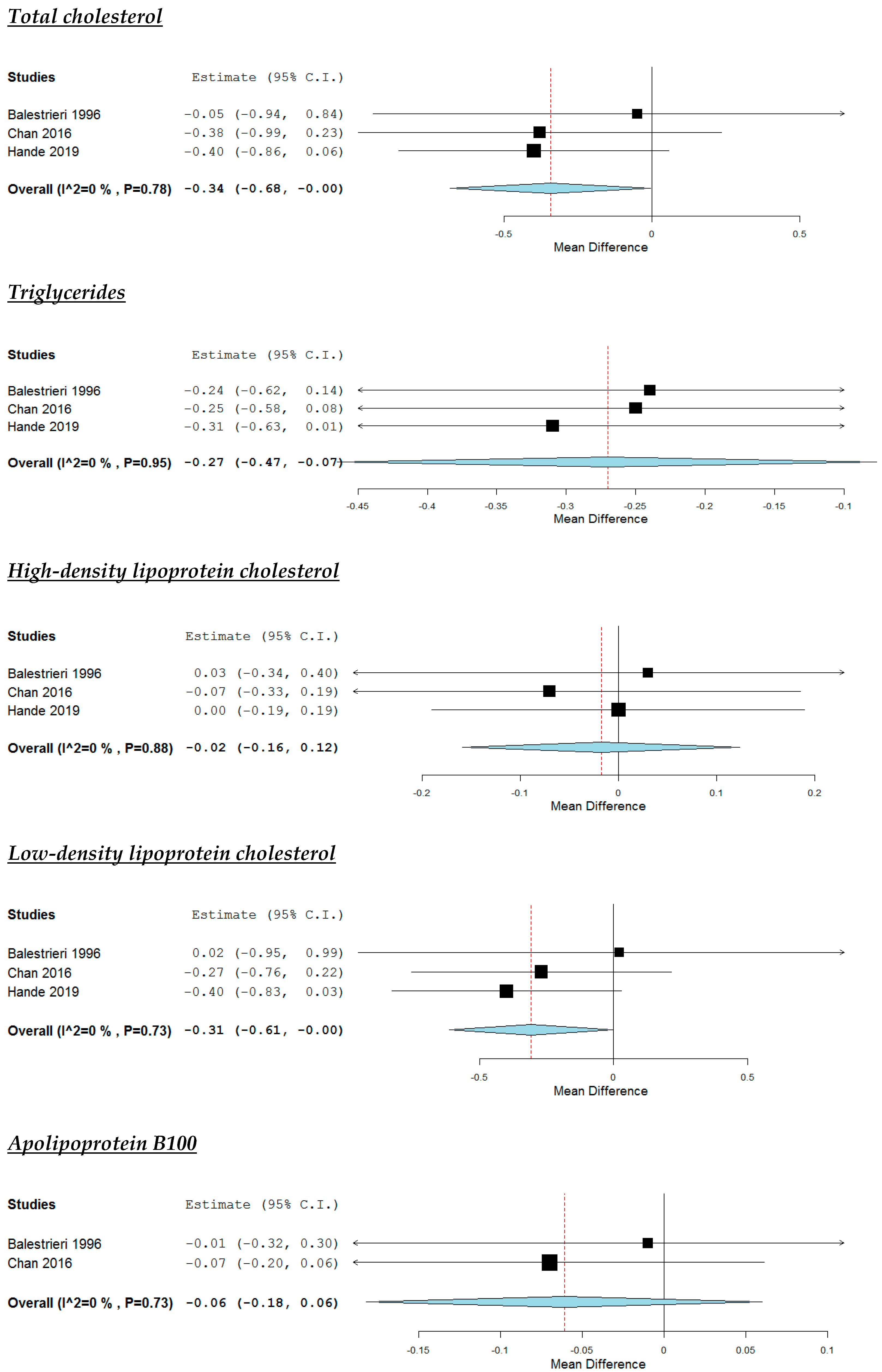 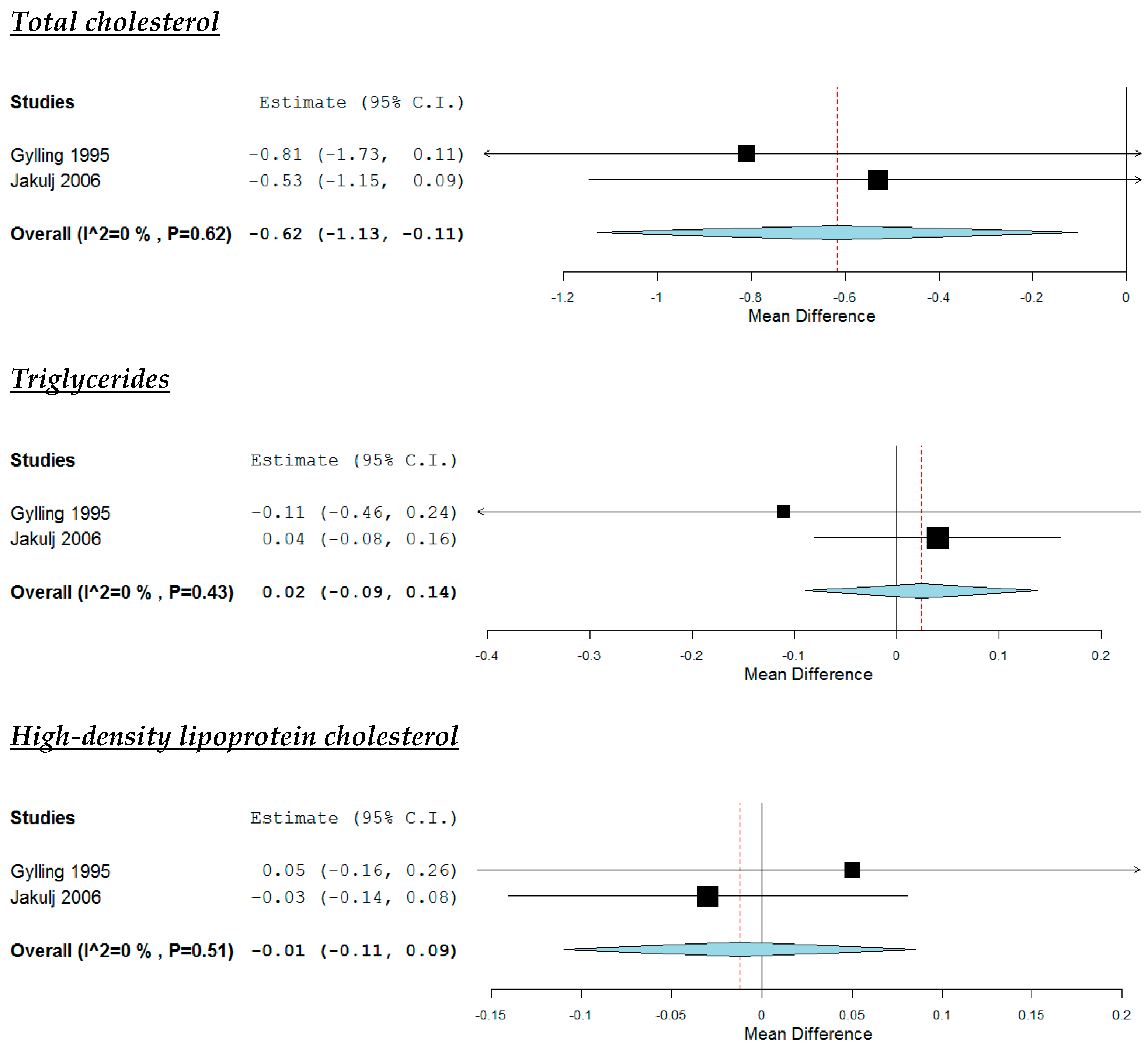 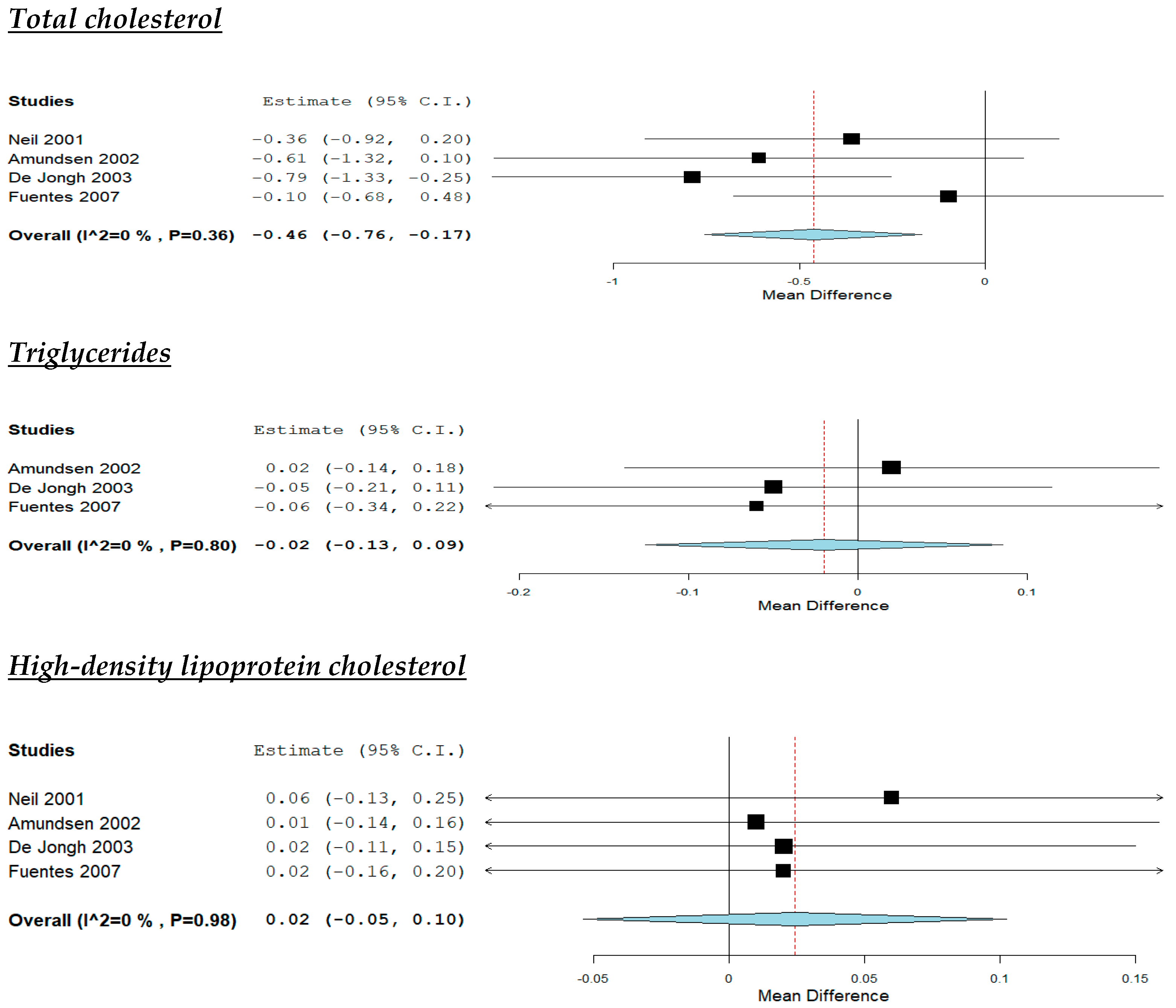 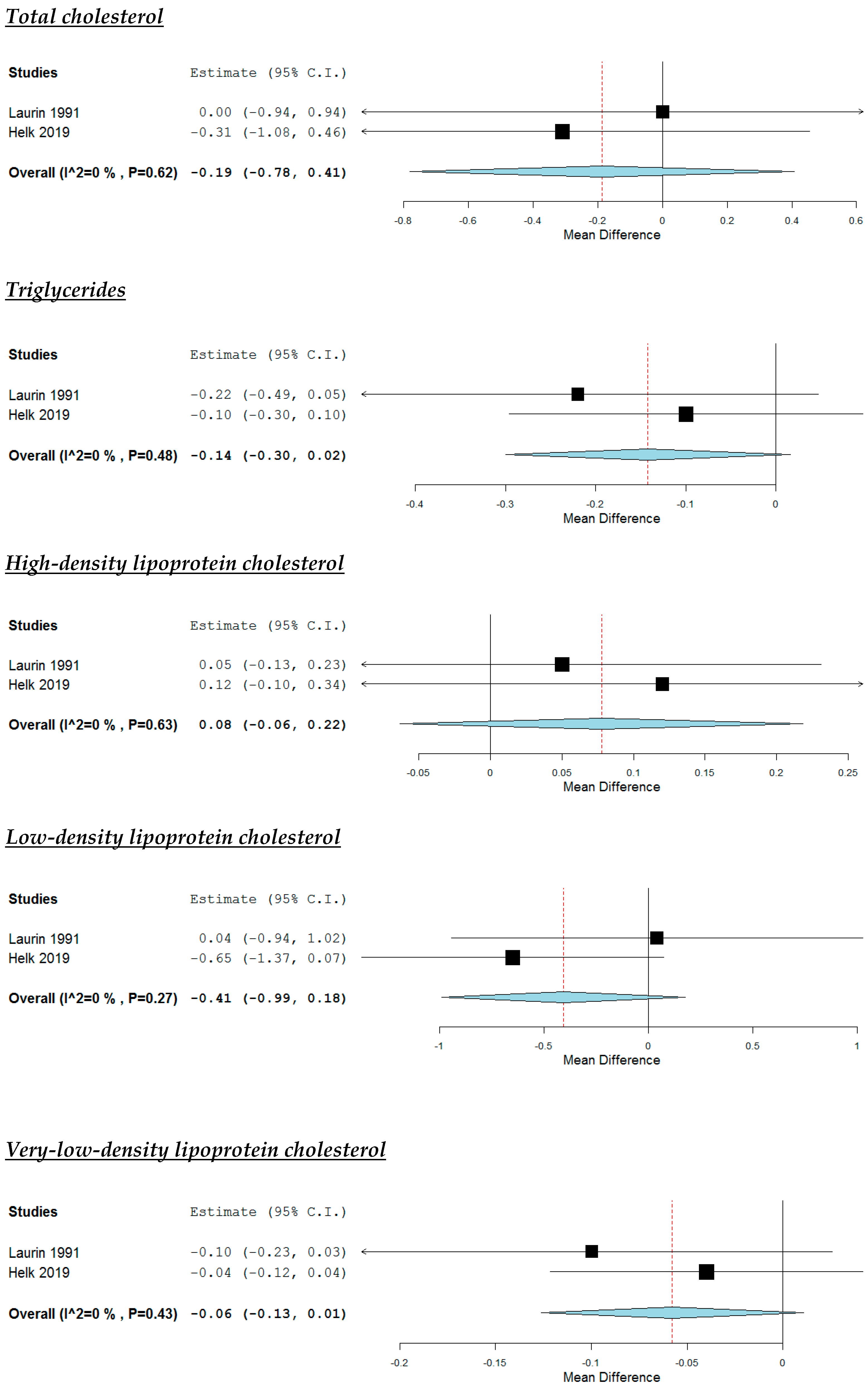 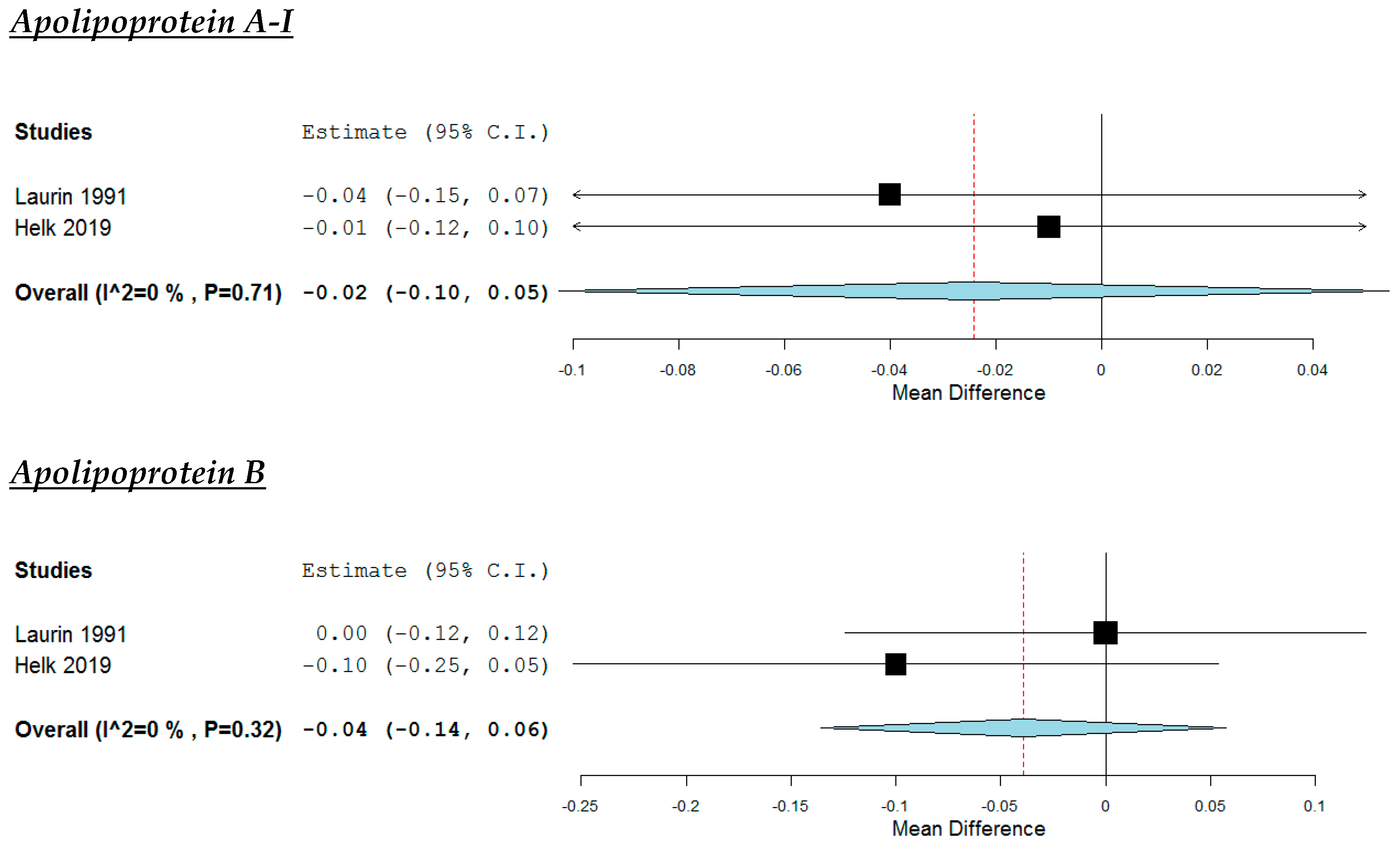