Nutritional Strategies to Optimize Performance and Recovery in Rowing Athletes

A triathlon is an extremely high-intensity exercise and a challenge for physiological adaptation. A triathlete’s microbiome might be modulated by diet, age, medical treatments, lifestyle, and exercise, thereby maintaining aerobiosis and optimum health and performance. Probiotics, prebiotics, and synbiotics have been reported to have health-promoting activities (e.g., immunoregulation and cancer prevention). However, few studies have addressed how probiotics affect the microbiota of athletes and how this translates into functional activities. In our previous study, we found that Lactobacillus plantarum PS128 could ameliorate inflammation and oxidative stress, with improved exercise performance. Thus, here we investigate how the microbiota of triathletes are altered by L. plantarum PS128 supplementation, not only for exercise performance but also for possible physiological adaptation. The triathletes were assigned to two groups: an L. plantarum 128 supplement group (LG, 3 × 1010 colony-forming units (CFU)/day) and a placebo group (PG). Both groups continued with their regular exercise training for the next 4 weeks. The endurance performance, body composition, biochemistries, blood cells, microbiota, and associated metabolites were further investigated. PS128 significantly increased the athletes’ endurance, by about 130% as compared to the PG group, but there was no significant difference in maximal oxygen consumption (VO2max) and composition between groups. The PS128 supplementation (LG) modulated the athlete’s microbiota with both significant decreases (Anaerotruncus, Caproiciproducens, Coprobacillus, Desulfovibrio, Dielma, Family_XIII, Holdemania, and Oxalobacter) and increases (Akkermansia, Bifidobacterium, Butyricimonas, and Lactobacillus), and the LG showed lower diversity when compared to the PG. Also, the short-chain fatty acids (SCFAs; acetate, propionate, and butyrate) of the LG were significantly higher than the PG, which might be a result of a modulation of the associated microbiota. In conclusion, PS128 supplementation was associated with an improvement on endurance running performance through microbiota modulation and related metabolites, but not in maximal oxygen uptake. View Full-Text
Keywords: L. plantarum PS128; gut microbiota; SCFAs; exercise; triathlete L. plantarum PS128; gut microbiota; SCFAs; exercise; triathlete
►▼ Show Figures 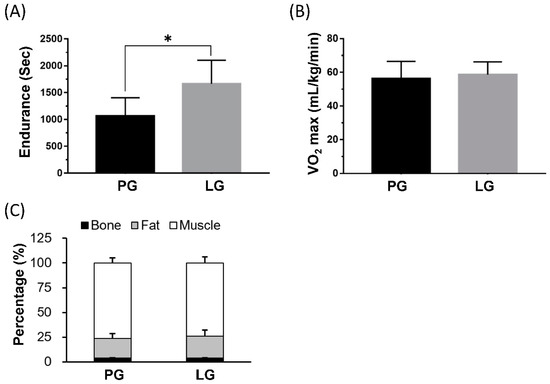