Fish Consumption and Coronary Heart Disease: A Meta-Analysis
Next Article in Special Issue

Efficacy of a High-Iron Dietary Intervention in Women with Celiac Disease and Iron Deficiency without Anemia: A Clinical Trial

Celiac disease (CD) is a chronic inflammatory bowel disease triggered by the ingestion of gluten in genetically susceptible individuals, who test positive for human leukocyte antigen (HLA) DQ2 and/or DQ8. Its prevalence is about 1%, and since the small intestine is its main target organ, CD can have gluten-related gastrointestinal manifestations, such as bloating, abdominal pain, diarrhea, and constipation [1,2,3]. What is more, CD is a multisystem disorder, and patients can also complain of extraintestinal signs and symptoms [4,5]. CD diagnosis in adults is usually based on positive results of specific serological tests for anti-endomysial antibodies (EMA) and anti-tissue transglutaminase (tTG) antibodies performed during a free diet and then confirmed by the finding of intestinal villous atrophy on histological examination of duodenal biopsies. The only treatment currently available is a lifelong and strict gluten-free diet (GFD) but, nevertheless, many CD patients complain about the persistence or relapse of symptoms even during GFD [6]: in this case, interviews with gastroenterologists and nutritionists are necessary in order to investigate a proper adherence to the GFD; moreover, repetition of serological tests and duodenal biopsies are mandatory to exclude ongoing intestinal damage and gluten exposure. When persistent damage in the duodenal mucosa is found despite a correct GFD, refractory CD and possible complications such as intestinal lymphoma must be investigated [7].
Moreover, in clinically non-responding CD, other possible overlapping diagnoses should be considered, such as inflammatory bowel diseases (IBD), and irritable bowel syndrome (IBS)-like disorders (e.g., lactose intolerance), but many cases seem to remain unsolved [8]. Recently, a diet low in fermentable oligo-, di-, and monosaccharides and polyols (FODMAPs) has been proposed as an ex adiuvantibus treatment to reduce IBS-like symptoms in CD patients following a GFD, although there is no specific indication or supporting diagnostic test [9,10].
More recently, nickel (Ni) allergic contact mucositis (ACM), which is linked to the ingestion of Ni-rich foods, has been added to IBS-like disorders. Together with Ni allergic contact dermatitis (ACD), Ni ACM is an expression of “systemic Ni allergy syndrome” (SNAS) and can have both gastrointestinal and extraintestinal manifestations. According to the European Surveillance System on Contact Allergy (ESSCA), the prevalence of an epicutaneous patch test positive to Ni may reach 30% in some European countries, but Ni ACM prevalence may even be higher [11]. Patients affected by Ni ACM show a low-grade intestinal inflammation with a local adaptive response to Ni-containing foods: this mucositis seems to be characterized by increased lymphocyte trafficking (type IV immune response) [12,13]. Ni ACM diagnosis is currently based on a Ni oral mucosa patch test (omPT), which has already proved good sensitivity and specificity [13], and a low-Ni diet (LNiD) can be thus suggested in this condition in order to significantly reduce both Ni-related gastrointestinal and extraintestinal symptoms [14,15,16,17,18,19].
Figure 1 shows the main foods with the highest Ni content, and it is easy to observe that many of them (e.g., corn) are consumed in large quantities by CD patients on a proper and strict GFD [15,16]. It is therefore possible that a high load of alimentary Ni may induce or exacerbate a “Ni sensitivity” in predisposed subjects, especially in CD patients on a long-term GFD.
On these premises, our aims were (1) to study the prevalence of Ni ACM in CD patients in serological and histological remission with relapsing symptoms; (2) to evaluate the effects of an LNiD on gastrointestinal and extraintestinal symptoms in these patients.

Study design: pilot study. We recruited 102 consecutive CD patients (74 female, 28 male; age range 18–65 years, mean age 42.3 ± 7.4) on a GFD since at least 12 months, with current serum EMA and anti-tTG antibodies negative results and histological remission (Marsh–Oberhuber type 0–I) who complained of relapsing or persisting gastrointestinal and/or extraintestinal symptoms. They referred to our Gastroenterology Unit from January 2017 to December 2019. Their CD diagnosis had been previously made according gluten-related signs and symptoms, serum EMA and anti-tTG antibodies positive results, and the histological finding of duodenal villous atrophy (Marsh–Oberhuber type IIIA, B, or C) [20,21,22].
Inclusion criteria: presence of at least three gastrointestinal symptoms with a score ≥5 on the modified GSRS questionnaire completed at study recruitment, in order to exclude patients with less significant clinical pictures. Exclusion criteria: IgE-mediated food allergy (diagnosed by skin prick test or laboratory tests (ImmunoCAP) for serum allergen-specific IgE antibodies); history of past or current cancer; inflammatory bowel disease; infectious diseases including Helicobacter pylori (HP); lactose intolerance (by means of the lactose breath test and genetic evaluation of lactase-gene polymorphism [23,24]).
The study was performed in compliance with the Declaration of Helsinki. Approval of the local ethics committee was obtained (study approval: report 8.2.0 06/2020 of the Board of the Department of Translational and Precision Medicine—Sapienza University of Rome). Written informed consent was obtained from all patients.

The Gastrointestinal Symptom Rating Scale (GSRS) questionnaire modified according to “Salerno’s experts’ criteria” is a standardized tool used in the diagnostic protocol for non-celiac gluten sensitivity, and it has also been employed to objectively evaluate the clinical status in other IBS-like disorders such as Ni sensitivity [15]. It consists of a list of gastrointestinal and extraintestinal symptoms associated to a numeric scale (score ranging from 0 to 10), which represents the intensity perceived by the patients during a specific dietary regimen [25]. Gastrointestinal symptoms include abdominal pain, heartburn, acid regurgitation, bloating, nausea, borborygmus, swelling, belching, flatulence, decreased or increased evacuations, loose or hard stools, urgent need for defecation, oral/tongue ulcers. Extraintestinal symptoms include dermatitis, headache, foggy mind, fatigue, numbness of the limbs, joint/muscle pain, fainting [15].
According to our standard outpatient treatment protocol for the management of CD, the questionnaire had been previously administered at CD diagnosis (T0) and after at least 12 months of GFD, when serological and histological remission had been achieved (T1). After at least three further months on a GFD, a third questionnaire was administered to those CD patients who complained of a relapse of gastrointestinal and extraintestinal symptoms, despite confirmed negative serological and histological results to exclude refractory CD (T2, study recruitment). The last questionnaire was administered after 3 months of LNiD in addition to GFD (T3).

Once enrolled in the study (T2), all patients underwent an Ni omPT to detect the presence of Ni ACM. Ni omPT is a 5 mm filter paper disk saturated with a 5% solution of Ni sulfate in Vaseline (0.4 mg Ni-sulfate/8 mg Vaseline). It is applied on the upper lip mucosa and held in place by a transparent adhesive film (Tegaderm, 3M, St. Paul, MN - USA). For appropriate diagnostic purposes, a control test with only 8 mg Vaseline is also provided and applied. Local Ni-induced type IV hypersensitivity reactions (e.g., edema, hyperemia, aphthous/vesicular lesions) can be evident after just 2 h of exposure or even after 24–48 h as late reactions. Late general symptoms triggered by omPT (e.g., swelling, abdominal pain, diarrhea, headache, foggy mind, itching) should also be considered as positive test results [14,15].

All enrolled patients followed a balanced GFD with the addition of an LNiD for 3 months after a visit with trained dieticians, who verified correct adherence to both diet regimens by means of a daily dietary diary and biweekly telephone interviews. Ni is an element abundantly present in many foods, with a certain concentration variability depending on the type of soil and plant species, irrigation water, fertilizers, and pesticides. Thus, since its total elimination from the diet is impossible, we recommended to avoid only foods with an estimated high content of Ni (Ni > 100 μg/kg) (Figure 1). The use of stainless-steel utensils and pots has also been discouraged, in order to reduce Ni contamination during cooking [15,19,26].

Of the 102 patients recruited, 17 patients were excluded since they did not meet the criterion of at least three gastrointestinal symptoms with a score ≥5 in the GSRS questionnaire completed at T2. Sixty-two out of the remaining 85 patients were also excluded: 54 were lactose intolerant, 7 were affected by HP infection, 1 was affected by overlapping active ulcerative colitis. Three out of the remaining 23 patients dropped out of the study, reporting that they no longer wanted to follow further food restrictions. Therefore, a total of 20 patients (all female, age range 23–65 years, mean age 39.1 ± 2.9, median age 40) completed the study (Figure 2b).

All 20 patients studied (100%) showed Ni omPT positive results and received an Ni ACM diagnosis. They all showed evident local mucosal alterations induced by Ni (erythema, edema, and/or vesicles) within 2 h after patch application (Figure 3a,b). What is more, all 20 patients showed at least one additional gastrointestinal or extraintestinal systemic symptom within 48 h after Ni omPT.

In conclusion, our findings show for the first time that Ni-rich foods and Ni ACM can frequently be the cause of relapsing gastrointestinal and extraintestinal symptoms in CD patients, even/especially during a correct GFD. Furthermore, our study not only confirms the usefulness of Ni omPT in making an Ni ACM diagnosis but also highlights that a balanced LNiD in addition to a correct GFD can offer a significant clinical improvement in this category of patients.
Further studies with larger populations should be carried out to confirm these important data, which may change the clinical management of CD patients.

No institutional, private, or corporate financial support for the work was received. This research received no external funding. 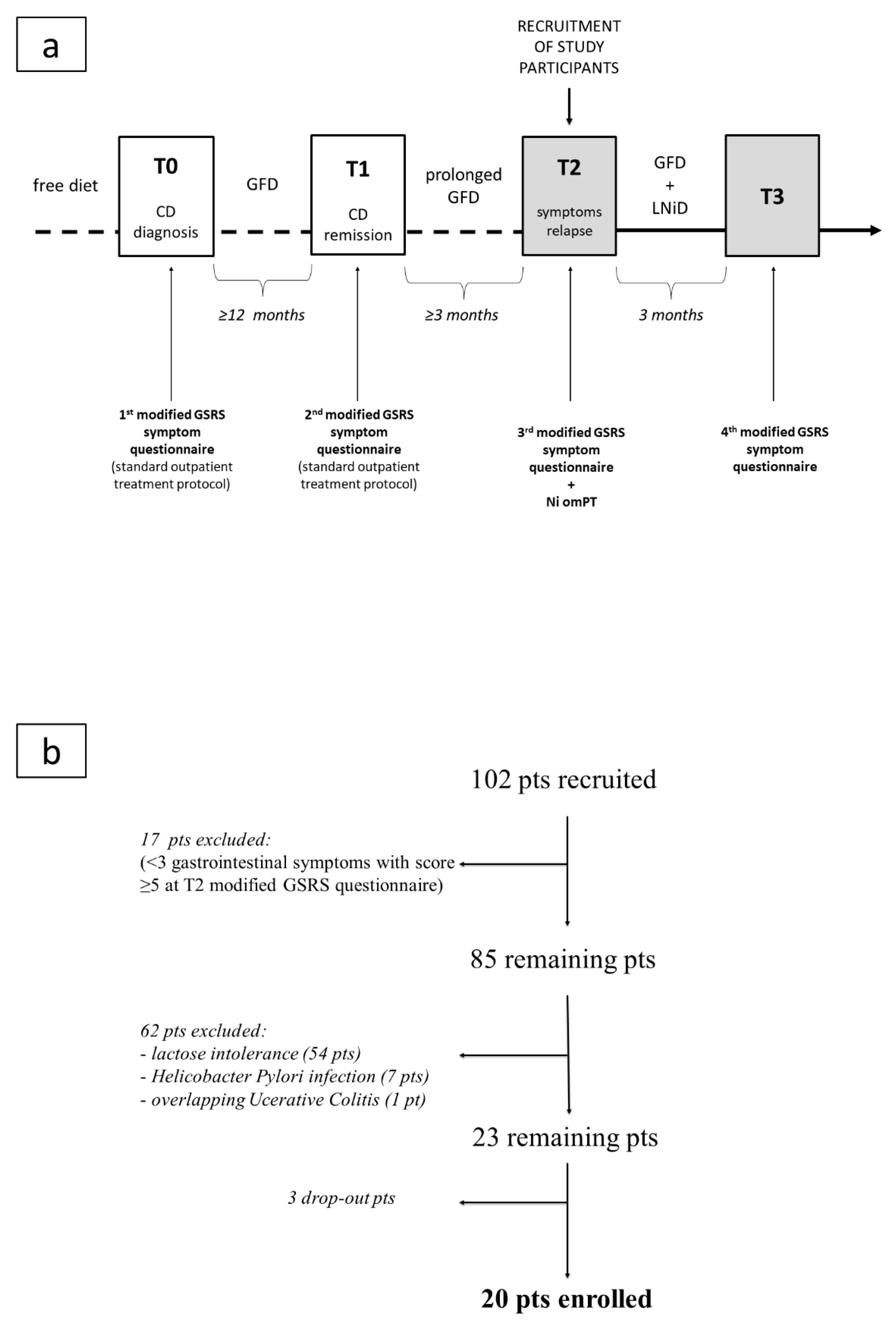 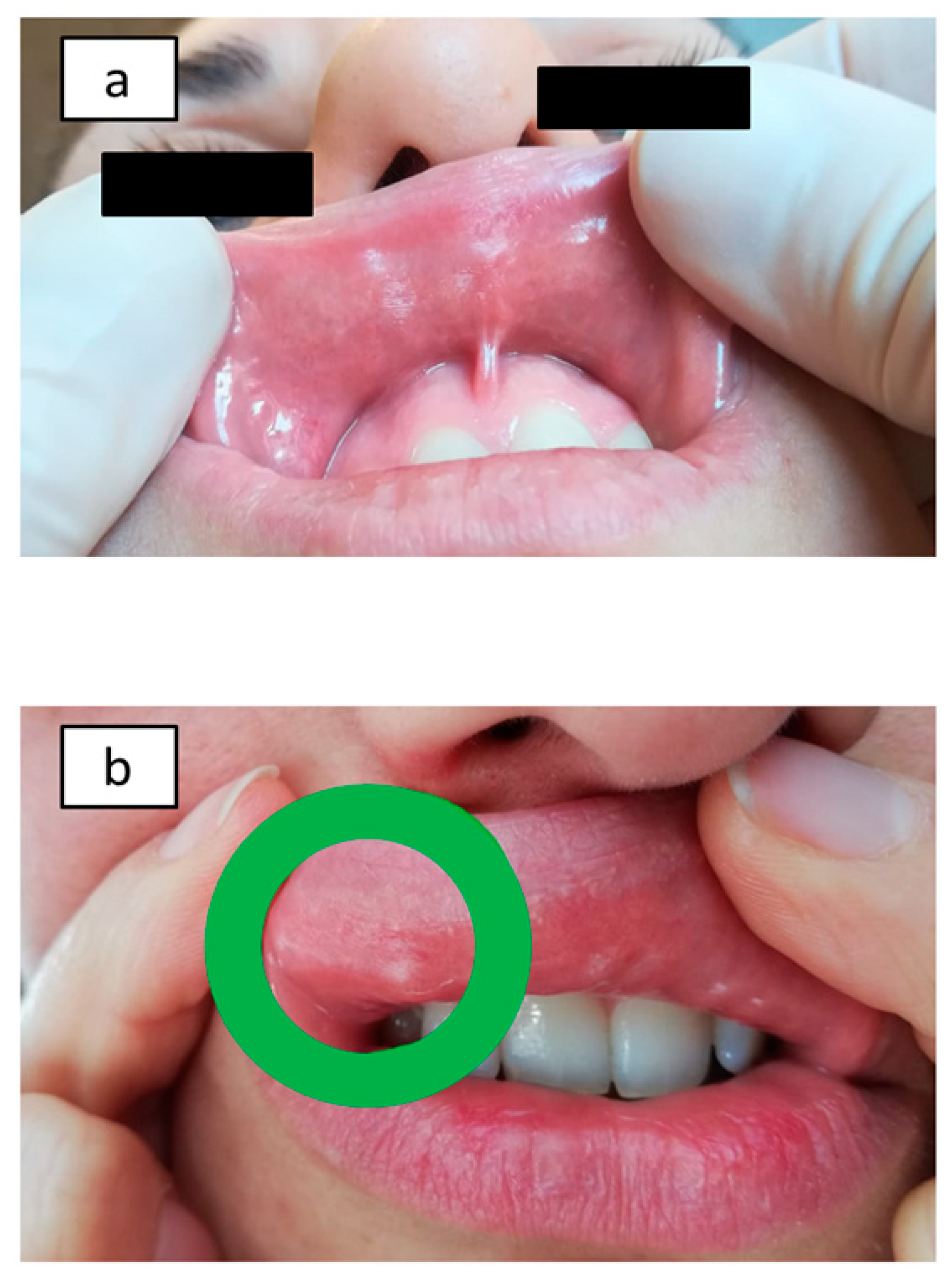 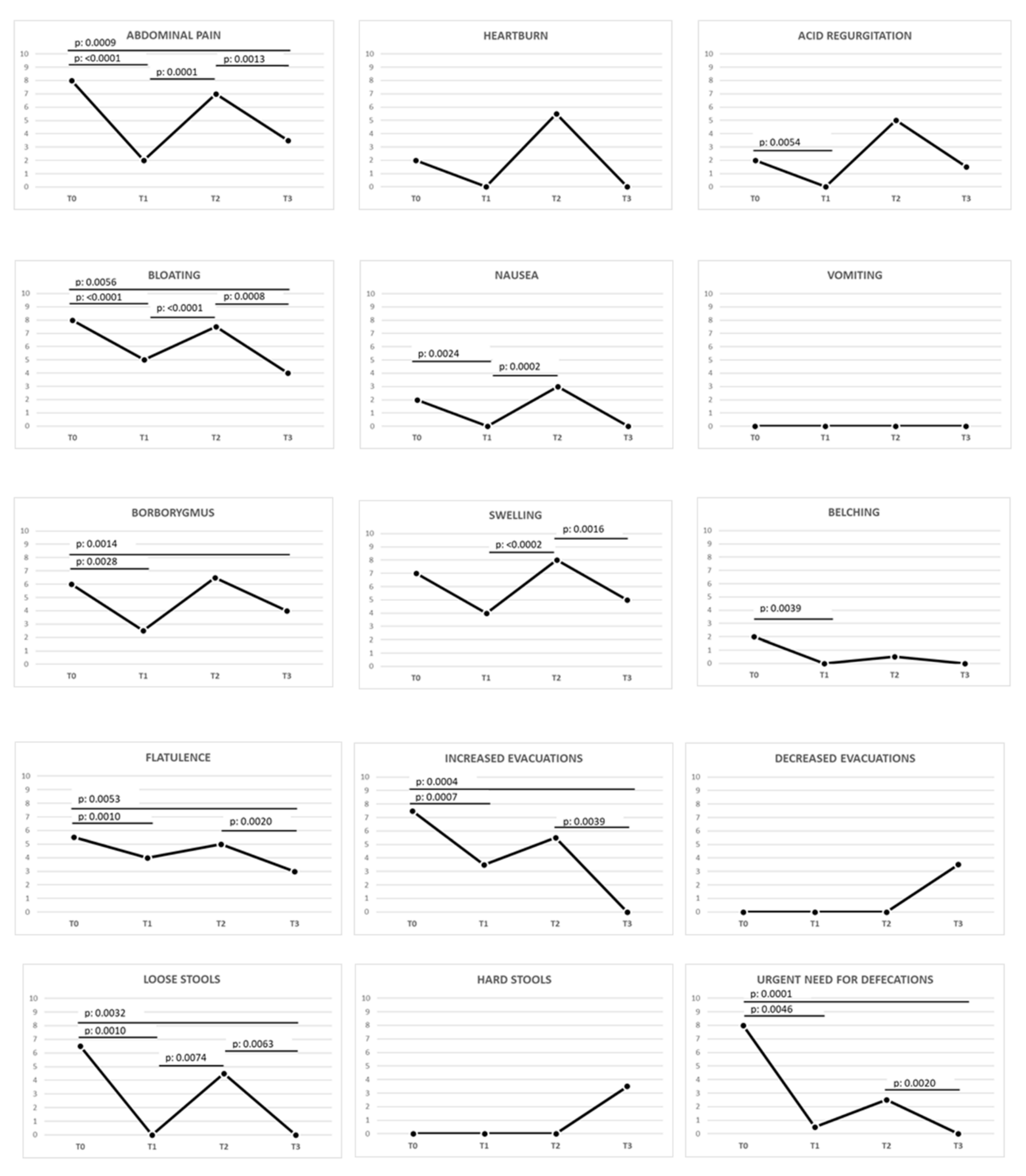 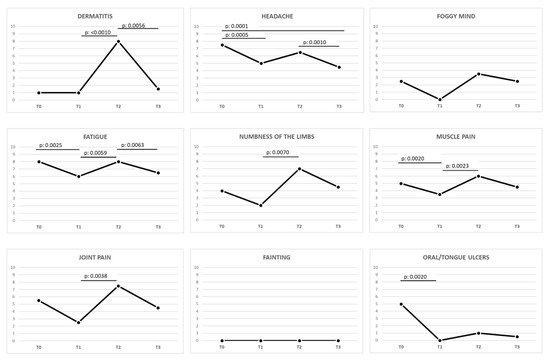 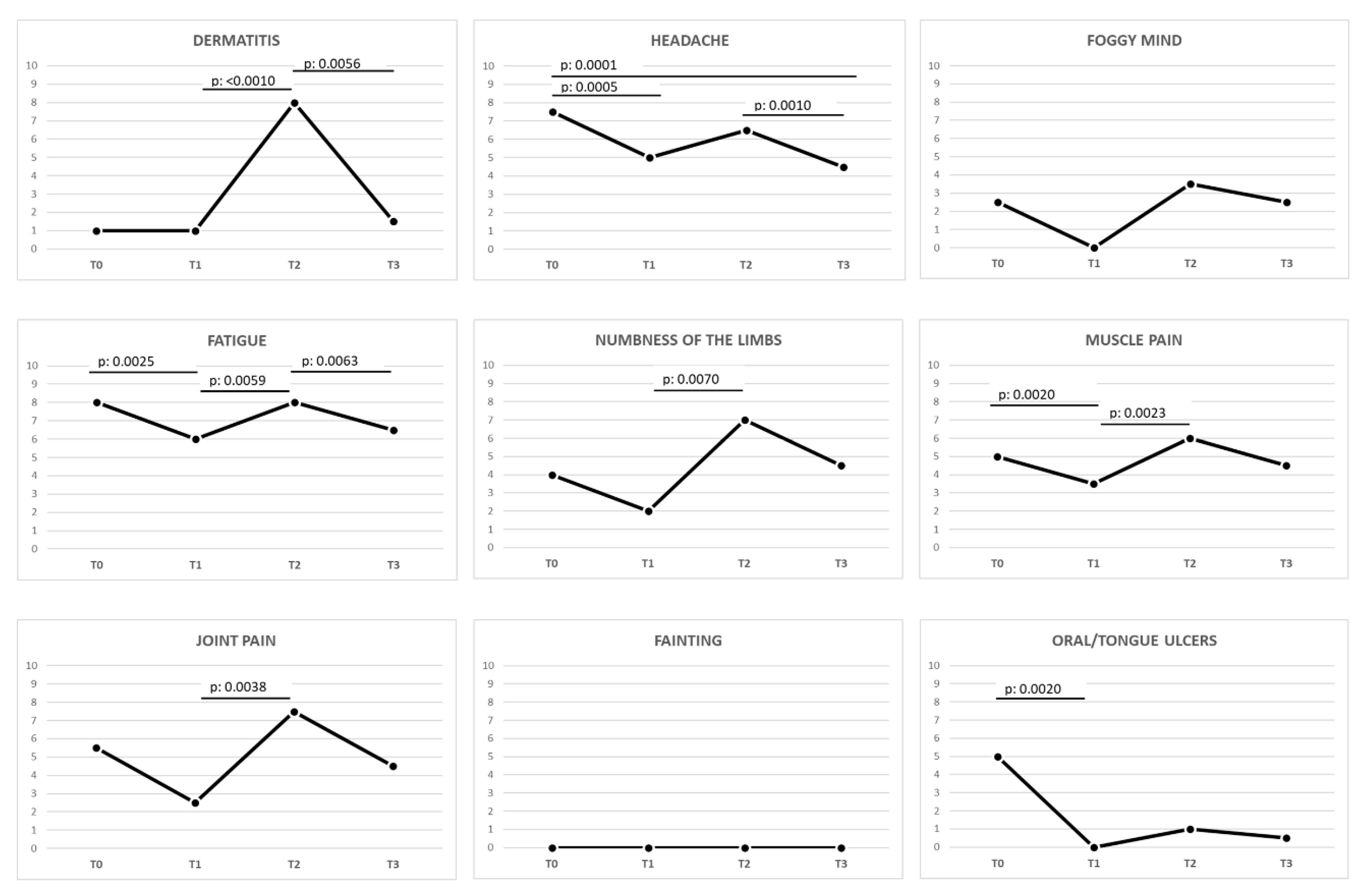