The Effect of Dietary Nitrate Supplementation on Isokinetic Torque in Adults: A Systematic Review and Meta-Analysis
Previous Article in Journal

Are Adherence to the Mediterranean Diet, Emotional Eating, Alcohol Intake, and Anxiety Related in University Students in Spain?
Previous Article in Special Issue

A systematic search using the Preferred Reporting Items for Systematic Reviews and Meta-Analysis (PRISMA) guidelines [110] was conducted for studies that investigated NO3− supplementation on weightlifting exercise performance using Dialnet, Directory of Open Access Journals, Medline, Pubmed, Scielo, Scopus and SPORTDiscus databases until April 2020, using the following terms: (concept 1) (nitrate OR beet *) AND (concept 2) (supplement * OR nutr * OR diet *) AND (concept 3) (strength OR “resistance exercise” OR “resistance training” OR “muscular power”). The original search yielded a total of 619 studies. After the elimination of duplicate articles and screening for inclusion criteria, a total of 291 articles were independently read and reviewed by three authors (RD, JJM and ASF). A quality assessment procedure was performed by three authors (ALR, RD and JJM) using the PEDro scale [111]. A total of four articles met the eligibility criteria for the present systematic review (Figure 1).
To ensure that the selection of studies assessed the effects of NO3− supplementation on weightlifting exercise performance, the authors applied a set of inclusion criteria [112]:
The four studies selected for our systematic review included a total of 49 men, all of whom were resistance trained (i.e., performed resistance exercise a minimum of twice per week).
In two of the selected studies [113,114], the influence of acute BR ingestion was assessed by adminstering 1 × 70 mL of BR (~6.4 mmol of NO3− per 70 mL) ~2 h prior to the commencement of exercise. In the remaining two studies [115,116], longer-term (≥ 3 days) dosing strategies of NO3− supplementation were employed. Mosher et al. [116] administered 1 × 70 mL of BR per day (~6.4 mmol of NO3− per 70 mL) for 6 consecutive days, although the authors did not report the timing of ingestion, which has important implications for the elevation of plasma NO3− and NO2− [64]. Flanagan et al. [115] administered 2 × NO3−-rich performance bars (32.5 mg of NO3− per two bars) for 3 consecutive days with the final two NO3−-rich performance bars ingested ~60 min prior to the commencement of exercise.

The exercise modalities used to assess weightlifting exercise performance were bench press using free weights [113], bench press using a Smith machine [114,116] and box squats using a Smith machine [114,115]. The details of the performance tests employed are summarized in Table 1.
This is the first systematic review to have focused on the ergogenic effect of dietary NO3− supplementation on weightlifting exercise performance. The main findings were that dietary NO3− supplementation can increase muscular power and velocity, and the number of repetitions to failure during bench press exercise, but not box squat exercise, in resistance-trained males.

3.1. The Effects of Dietary Nitrate Supplementation on Weightlifting Exercise Performance 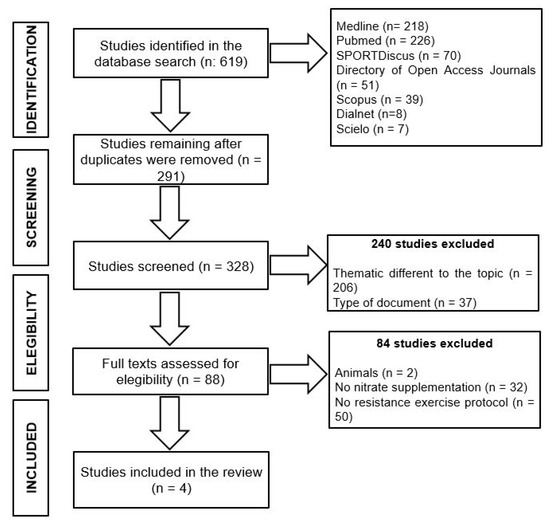