The aim of this study was to evaluate whether dietary behaviours of the Spanish adult population were changed during the COVID-19 outbreak confinement. For that purpose, an online questionnaire, based on 44 items including socio-demographic data, Mediterranean diet (MedDiet) Adherence Screener (MEDAS) as a reference of a healthy diet, processed foods intake, changes in their usual food choices and weight gain was distributed using social media and snowball sampling. A total of 7514 participants (37% aged below 35 years, 70.6% female, 77.9% university-level education or higher) from all the Spanish territory completed the questionnaire. Results outlined healthier dietary behaviours during the confinement when compared to previous habits. Overall, the MEDAS score (ranging from 0 to 14, whereby higher a scoring reflects greater adherence to the MedDiet) increased significantly from 6.53 ± 2 to 7.34 ± 1.93 during the confinement. Multivariate logistic regression models, adjusted for age, gender, region and other variables, showed a statistically significant higher likelihood of changing the adherence to the MedDiet (towards an increase in adherence) in those persons who decreased the intake of fried foods, snacks, fast foods, red meat, pastries or sweet beverages, but increased MedDiet-related foods such as olive oil, vegetables, fruits or legumes during the confinement. COVID-19 confinement in Spain has led to the adoption of healthier dietary habits/behaviours in the studied population, as reflected by a higher adherence to the MedDiet. This improvement, if sustained in the long-term, could have a positive impact on the prevention of chronic diseases and COVID-19-related complications. View Full-Text
Keywords: dietary behaviours; COVID-19; confinement; Mediterranean diet; olive oil; vegetables; fruits; legumes; fried foods; snacking dietary behaviours; COVID-19; confinement; Mediterranean diet; olive oil; vegetables; fruits; legumes; fried foods; snacking
►▼ Show Figures 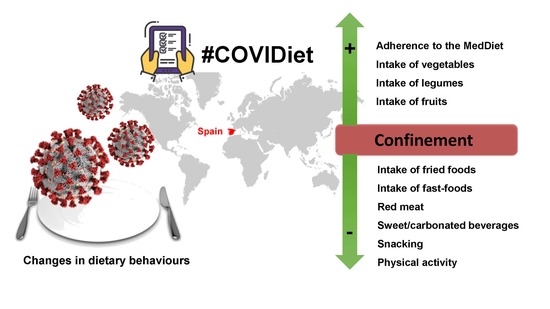