Effects of Prunus cerasus L. Seeds and Juice on Liver Steatosis in an Animal Model of Diet-Induced Obesity

Diabetes is a disease, in which dysregulation of insulin signaling leads to insulin resistance [1]. Clinical studies have shown that glycemic regulation and disrupted insulin singling negatively affect brain function [2]. Furthermore, several studies have shown diabetes is a risk factor of cognitive-related diseases such as vascular dementia and Alzheimer’s disease [3]. Accordingly, elderly patients with Type 2 diabetes (T2DM) are given clinical advice on the beneficial effect of exercise to increase insulin sensitivity [4]. However, few comprehensive guidelines have demonstrated the relationship between cognitive dysfunction and diabetes.
Endoplasmic reticulum (ER) plays a major role in protein synthesis and in folding and processing of secretory and transmembrane proteins [5]. When misfolded or unfolded proteins accumulate in ER due to genetic or environmental factors, ER stress occurs, which is mediated by three ER transmembrane proteins, IRE1, PERK, and ATF6, inducing unfolded protein response (UPR) [6].
Since ER stress can activate cellular inflammatory pathways that impair cellular functions and lead to metabolic disorders, existing evidences suggest that ER stress is a key link between T2DM, obesity and insulin resistance, [7,8]. It is known that exposure to high glucose levels can induce ER stress via the generation of free radicals, aberrant protein glycosylation, and increased membrane and protein turnover, leading upregulation of C/EBP homology protein (CHOP) expression (a prominent mediator of ER stress-induced apoptosis).
Diabetes is also associated with cerebral atrophy, neurological disabilities, cognitive decline, and psychomotor dysfunction, called diabetic encephalopathy (DEP) [9]. A growing body of evidence indicates that oxidative stress, chronic inflammation, mitochondrial dysfunction, impaired insulin signaling, and ER stress contribute to the development of DEP. However, few studies have investigated the effect of intestinal ER stress.
It has been reported that at the beginning of ER stress, increased GRP78 expression in the rat brain prevented CHOP-induced apoptosis, but when ER stress was persistent, CHOP levels were markedly increased in the hippocampus of diabetic rats [10]. This suggests that CHOP-ER stress-mediated apoptosis may be involved in hyperglycemia-induced hippocampal synapses and neuronal impairment, and thus, promote diabetic cognitive impairment.
Curcumin is a natural compound with known antioxidant and anti-inflammatory properties [11,12]. Although it has been shown to induce apoptosis of cancer cells, its effects on inflammatory response in T2DM is not well investigated. Accumulating evidence indicates low-grade inflammation, oxidative stress, and ER stress contribute insulin resistance in T2DM. Therefore, it would appear that suppression of ER stress and inflammation might improve cognitive function in T2DM [13]. However, it has not been established whether exercise plus curcumin supplementation could improve diabetes-associated cognitive dysfunction by regulating ER stress response.
In the present study, we investigated whether cognitive functions differ in Otsuka Long-Evans Tokushima Fatty (OLETF) rat (the rat of diabetes), and in Long-Evans Tokushima Otsuka (LETO; the rat of control), and whether a combination of exercise and curcumin supplementation would ameliorate diabetes-associated cognitive dysfunction. Furthermore, we measured changes in the levels of inflammatory response cytokines and CHOP induced by a combination of exercise and curcumin supplementation in the rat model of spontaneous diabetes.

The rats in OLETF+EX group were trained to climb a 1 m vertical (85° inclined) ladder with weights secured to their tails. During the first week, rats were familiarized with climbing up to the top cage with or without a weight. Training sessions, from the second week were started with a weight of 50% of body weight. Rats began climbing from the bottom of the ladder and were forced to climb to the top. When they reached the top, a 2 min rest period was allowed before the next trial. Subsequent trials were performed from the bottom of the ladder and 20 g was added to the previous weight at every trial. If a rat was able to climb 10 times with increasing weights, the training session was considered complete. In the event of failure to climb, the rat was forced to complete 10 trials with the last successful weight with no further weight increases [15].

Spatial learning and memory were investigated using the Morris water maze task [16]. A circular tank was in a diameter 136 cm, a height 60 cm, and a depth of 30 cm filled with 24 ± 1 °C water. The maze was divided into four equal quadrants and each quadrant of release points was assigned in four points of north (N), east (E), south (S), and west (W). A hidden circular platform (10 cm in a diameter) submerged 1.5 cm beneath the surface of the water was located in the center of the southeast quadrant. Various locations provided visual cues around the maze. Escape latency and traveled distance were measured for a tracking system. The OLETF and LETO rats performed four trials per day for five consecutive days on the platform located in the same position. Randomly, we assigned the starting points each day. We terminated trials either when OLETF rats and LETO rats climbed onto the platform or when time of 60 s had elapsed. After climbing onto the platform, the OLETF rats and LETO rats were allowed to remain on the platform for 15 s. When a rat did not find the platform within 60 s, the rat was moved to the platform and assigned a score of 60 s. After completing four trials, OLETF and LETO rats returned to their own cages with a warm environment. Escape latencies and traveled distances on the final platform were calculated using a computerized video-tracking system (Noldus Ethovision Version 5, Wageningen, The Netherlands). We defined daily scores as the average scores of four trials performed on the day. OLETF and LETO rats performed a 60 s probe trail with the platform removed from the tank on the data. Time spent in the target quadrant was calculated using a computerized video-tracking system (Noldus Ethovision Version 5, Wageningen, The Netherlands).

Briefly, the experimental rats were euthanized by isoflurane and collected fasting whole blood samples overnight. The blood of experimental rats was obtained using a 20 gauge through the left lateral approach on cardiac puncture. The serum was obtained by whole blood 9 mL in empty tubes and allowed the blood to clot completely. We centrifuged each tube at 2500× g for 15 min and transferred the serum into an empty tube for biochemistry analysis. We analyzed the fasting glucose levels using a One Touch II glucose meter (Life scan, Johnson & Johnson, New Brunswick, NJ, USA). The serum insulin, serum total cholesterol, and triglyceride (TG) levels were obtained on an enzymatically-linked immunoassay (ELISA; ALPCO, Salem, NH, USA) and enzymatic kits (Wako Chemicals USA, Inc., Richmond, VA, USA).

Rat liver, skeletal muscle, small intestines, and skin tissues were fixed in 4% paraformaldehyde and embedded in paraffin blocks. Blocks were sectioned at 3 μm, and sections were stained with hematoxylin and eosin (H&E). Morphological analyses were conducted using the Leica Qwin image analyzer system equipped with a Leica DMLS microscopy.

Statistical analysis was performed in using one-way ANOVA for all data and using two-way repeated measures ANOVA followed by Tukey’s post-hoc test for behavioral data. Results are presented as means ± standard errors, and statistical significance was approved for above 0.05 of p-values

3.1. Effects of Exercise and Curcumin Supplementation on Metabolic Complications in OLETF Rats

3.2. Effects of Exercise Plus Curcumin Supplementation on Histopathology in OLETF Rats

We examined the effects of exercise plus curcumin supplementation on morphological changes in hepatic and muscle tissues by H&E staining (Figure 2). Hepatic tissues of OLETF controls showed mild vacuolation, whereas this was not observed in LETO controls. Interestingly, in the OLETF+EX+Curcumin group, hepatic and muscle tissues appeared normal without vacuolation (Figure 2A). Neither LETO nor OLETF controls exhibited abnormal characteristics such as muscle fibrosis of gastrocnemius muscles. However, muscle fiber sizes were significantly smaller in OLETF controls compared to LETO controls (p < 0.05) and muscle fiber size of the both the OLETF+EX and the OLETF+EX+Curcumin group was significantly bigger in OLETF controls. In skin sections, OLETF controls were found to have less developed skin muscle layers under hypodermis than LETO controls. Interestingly, these skin muscle layers were much more developed in the OLETF+EX and the OLETF+EX+Curcumin groups than in OLETF controls.
T2DM is considered to be accompanied by chronic inflammation, and even mild but chronic inflammation could disrupt small intestine epithelium and shortens villi. Small intestines of OLETF controls showed relatively short and disrupted villi as compared with LETO controls, suggesting that OLETF rats exhibit chronic inflammation in the small intestine. Therefore, this observation showed. In addition, infiltrating monocytes were observed in villi of the small intestine as shown with arrows, which are normally observed in inflammatory conditions such as colitis. 40× magnified photo shows irregularly aligned infiltrated monocytes into the villi in OLETF group. Interestingly, these phenomena were not observed in the OLETF+EX+Curcumin group (Please see in Figure 2A as indicated arrows), whereas the OLETF+EX group showed less intensive monocyte infiltration of villi compared to OLETF group, though villi were of normal length.

3.3. Effects of Exercise and Curcumin Supplementation on ER Stress in the Small Intestine Tissues of OLETF Rats

3.4. Effects of Exercise and Curcumin Supplementation on Learning and Memory Deficits in OLETF Rats

Cognitive function was assessed using the Morris water maze test. Mean escape latency decreased over the consecutive five days of learning period in all groups (Figure 3A). We found that mean escape latency was greater for OLETF than LETO controls (49.3 s versus 11.8 s of OLETF rats versus LETO rats on the tracking system, p < 0.05), but significantly smaller in the OLETF+EX+Curcumin group (13.8 s) than in the OLETF+EX group (18.8 s) and in OLETF (49.4 s) controls (Figure 4A).
To evaluate memory retention, we performed a probe trial two days after the last Morris water maze test. Rats were admitted to swim for 60 s in the swim pool in which they trained, but with the escape platform withdrawn. The percentage of swimming time spent within the target quadrant by OLETF controls was smaller than that spent by LETO controls (24.4% versus 48.9% of OLETF rats versus LETO rats on the tracking system, p < 0.05), and by rats in the OLETF+EX (40.6%) and the OLETF+EX+Curcumin (45.2%) groups, and was significantly smaller in the OLETF+EX group than in the OLETF+EX+Curcumin group (Figure 4B,C). These results suggest that exercise plus curcumin may improve cognitive function.

We found OLETF rats in combination of exercise with curcumin supplementation improved spontaneously developed Type 2 diabetic characteristics such as enhanced fasting glucose levels, insulin resistance, and lipid profiles. In addition, learning and memory retention deficiencies in OLETF rats were improved by exercise plus curcumin supplementation, presumably by suppressing inflammatory response and ER stress response. We believe these results have potential applications for the nutritional therapy of diabetes-associated cognitive dysfunction.

We thank Hyuna Lee, Haelim Park, Hye-Jeong Hwang, and Ju-Gyeong Yoon for their assistances with the all animal experiments. 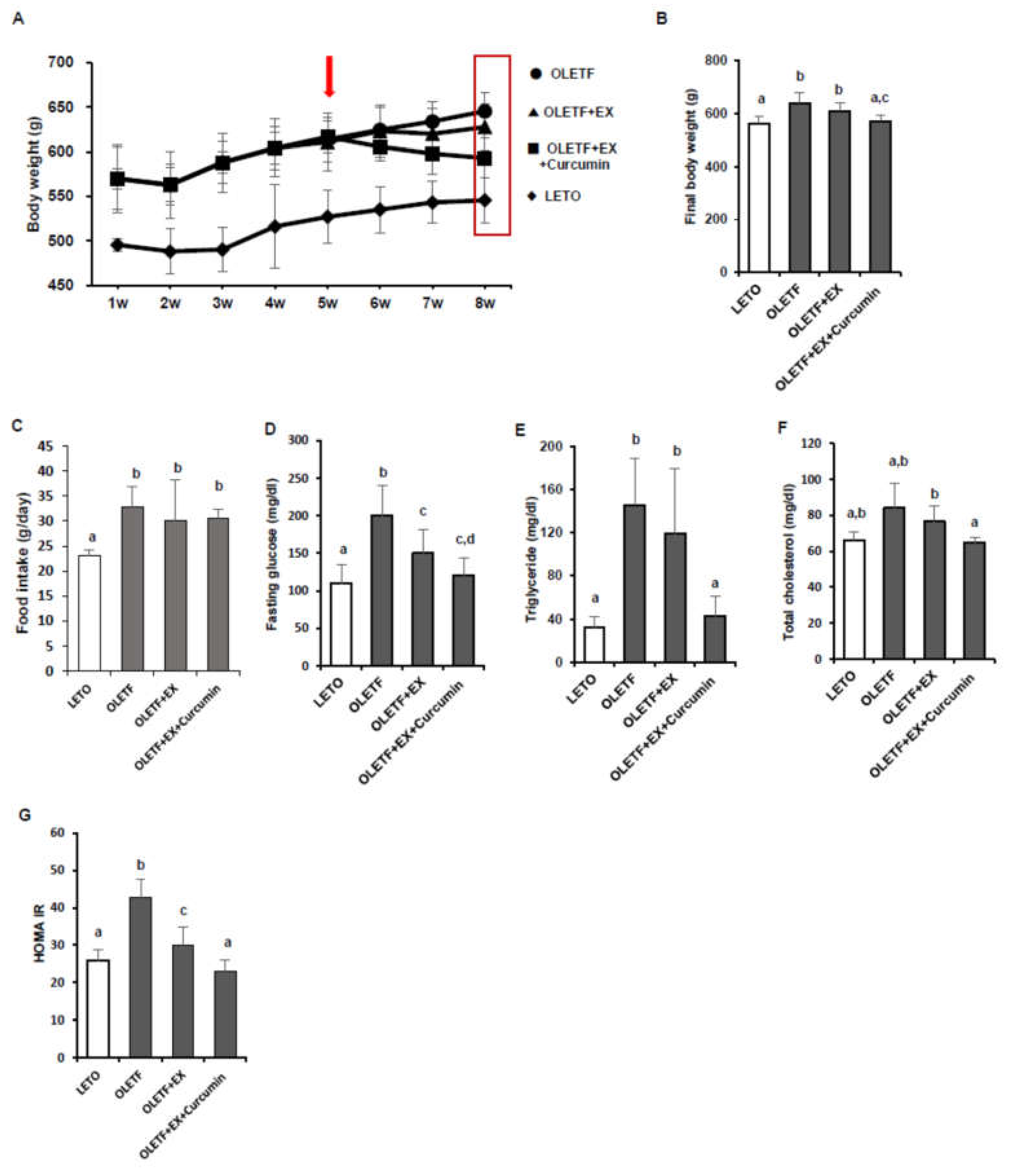 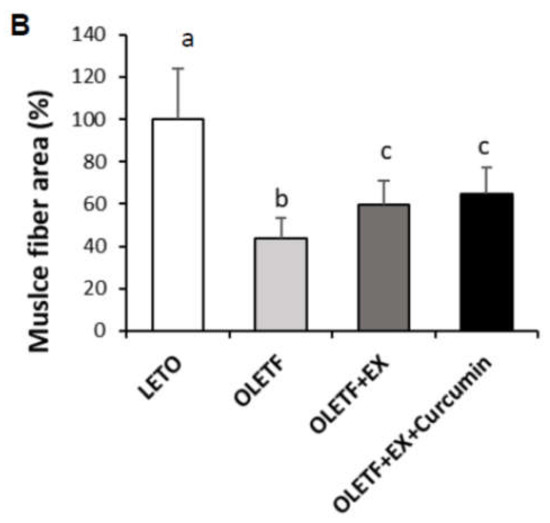 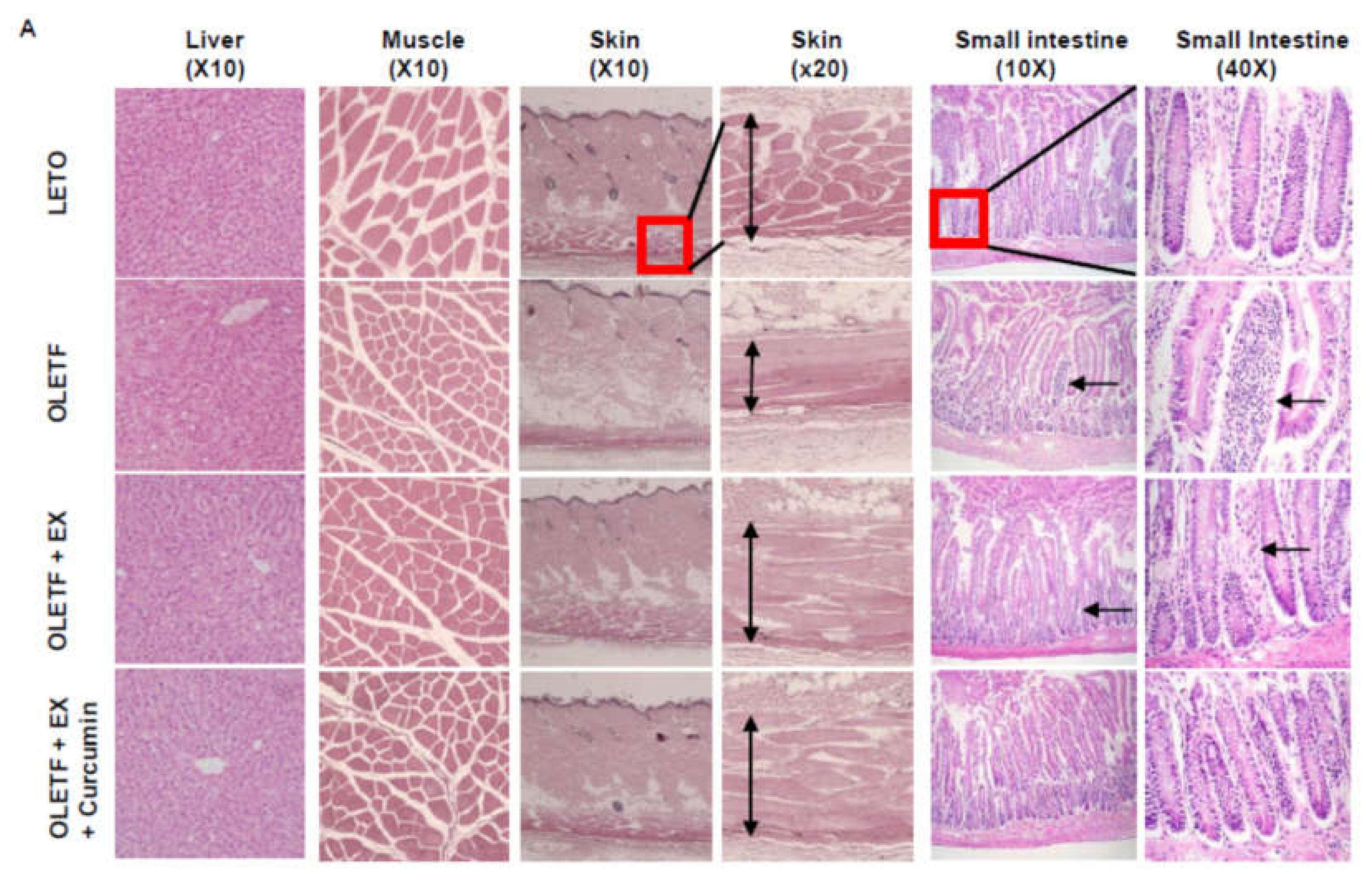