Effects of Prunus cerasus L. Seeds and Juice on Liver Steatosis in an Animal Model of Diet-Induced Obesity
Next Article in Special Issue

With an increasing prevalence worldwide, dyslipidemia has become a public health problem. Dyslipidemia is a well-known important risk factor for cardiovascular disease (CVD) and metabolic syndrome [1]. In 2012, the mortality rate of chronic non-communicable diseases in China was 533 per 100,000, including 272 deaths caused by cardiovascular and cerebrovascular diseases [2]. In the past 30 years, with rapid economic development and improvement in the standard of living in China, the blood lipid levels in the Chinese population have gradually increased, and the prevalence of dyslipidemia has increased significantly. In 2012, the prevalence of hypercholesterolemia was 4.9%, which is 69% higher than in 2002 (2.9%); the overall prevalence of dyslipidemia in Chinese adults was 40.4% in 2012, which was significantly higher than that in 2002 (18.6%) [2]. This indicates that the health care burden of dyslipidemia and its related diseases has consistently increased in the past decade.
Dyslipidemia is a disease characterized by elevated total cholesterol (TC) and/or triglyceride (TG) levels or a low high-density lipoprotein cholesterol (HDL-C) level, which contributes to the development of coronary heart disease and stroke [1]. According to the data reported by the Chinese Center for Disease Control and Prevention in 2015, 26.4% of ischemic heart disease cases in China are attributed to hypercholesterolemia, which is one component of dyslipidemia. Secondary dyslipidemia accounts for most dyslipidemia cases and is associated with lifestyle factors or medical conditions that interfere with blood lipid levels over time. Among these influencing factors, obesity (specifically abdominal obesity), alcohol consumption, and high-fat diets (specifically, high saturated and trans-fatty acid intakes) are well-known risk factors of dyslipidemia, as confirmed by several previous studies [3,4,5].
Carbohydrates significantly contribute to the total energy intake, particularly in the Chinese population who use rice and wheat as their staple food. At present, several studies have assessed the effect of carbohydrate intake on dyslipidemia [6,7,8,9,10]. Moreover, most of these studies have been conducted in European and American populations, and a few Asian studies have been conducted in the Korean population [9,10]. A study assessing the effect of carbohydrate intake on dyslipidemia in the Chinese native population has not been conducted yet.
The concept of and calculations to determine the low-carbohydrate diet (LCD) score have been introduced in detail previously [9,11,12]. In summary, participants with the highest scores have the lowest carbohydrate intakes. In 1992, the percentage of energy intake from carbohydrates in urban and rural residents in China was 66.2%, which decreased to 55.0% in 2012 according to The Report on the Status of Nutrition and Chronic Diseases of Chinese residents (2015). Therefore, it is of epidemiological value to study the effect of carbohydrate intake on dyslipidemia in the Chinese population. The present study used the low-carbohydrate diet (LCD) score to examine the association between LCD and dyslipidemia and its components in Chinese adults. Further, we identified the association by source foods (plant based and animal based).

Data were obtained from the China Health and Nutrition Survey (CHNS), which used a multistage, random cluster sampling process to select samples from 15 provinces in China [13]. The sample scheme is reported in detail elsewhere [13]. Data on fasting blood glucose levels were first collected in 2009 (N = 9549). In the CHNS, the information was collected by trained interviewers to assure compliance and quality of data. The CHNS dataset and the Institutional Review Board information are available on the official website of the CHNS (https://www.cpc.unc.edu/projects/china). Participants provided written informed consent for inclusion in this study.
This study used one round of survey data from 2009. Participants aged less than 18 years (n = 1160) were excluded. Subsequently, we excluded 54 participants with insufficient blood sample data (i.e., TC, HDL-C, low-density lipoprotein cholesterol [LDL-C], TG, and fasting plasma glucose levels) and 22 participants with implausible energy intake (<800 kcal/day or >6000 kcal/day for males; <600 kcal/day or >4000 kcal/day for females) [14]. Additionally, we excluded participants taking medications for hypertension, diabetes, and myocardial infarction and participants who reported a medical history of heart attack, stroke, or diabetes (n = 2392). Finally, a total of 5921 participants (2743 males and 3178 females) were included in this study. A flowchart of the selection process of the study population is shown in Figure 1.

2.2. Dietary Assessment and Calculation of the Low-Carbohydrate Diet Score

The 3 day, 24 h dietary recalls were used to assess the dietary intake of each participant. The quantities and types of food and beverages consumed during the past 24 h were determined from the participants. The interviewers measured the participants’ dietary intake with picture aids and food models during household interviews. The participants’ energy and nutrient intakes were calculated using the China Food Composition Table (FCT) (FCT 2002 edition and FCT 2004 edition).
To evaluate LCD based on the method used by Halton et al. [11], we referred to the concept of the LCD score. According to the percentage of energy from carbohydrate, protein, and fat consumption, the participants were ranked separately and were subsequently divided into 11 groups. Using the assignment method by Halton et al., the highest score (LCD score = 30) group had the lowest carbohydrate intake and the highest fat and protein intakes, while the lowest score (LCD score = 0) group had the highest carbohydrate intake and the lowest fat and protein intakes. To facilitate the analysis, we further calculated the scores for animal-based food (the percentage of energy from carbohydrate, animal protein, and animal fat consumption) and plant-based food (the percentage of energy from carbohydrate, plant protein, and plant fat consumption) in a similar manner. The division of animal- and plant-based food is based on the FCT 2002 and FCT 2004 editions. Table 1 presents the percentages used to determine the LCD score, animal-based LCD score, and plant-based LCD score. According to the scores (from low to high), the participants were divided into four groups according to gender.
Simultaneously, based on the study by Kim et al. [9], when comparing the acceptable macronutrient distribution range (AMDR) for carbohydrates as recommended by the Chinese Dietary Reference Intakes (CDRIs) Handbook (2013), the participants in each quartile were divided into three groups according to the percentage of energy from carbohydrates: lower (<50%), standard (50–65%), and higher (>65%). Moreover, we adjusted the carbohydrate intake criteria according to previous research criteria [15,16]: low-carbohydrate diet (<40%), moderate-carbohydrate diet (40–65%), and high-carbohydrate diet (>65%). Finally, fat intake in each quartile was also determined in our study on comparing the AMDR using the fat intake criteria from the CDRIs Handbook: lower (<20%), standard (20–30%), and higher (>30%).

2.4. Assessment of Other Variables

Body mass index (BMI) was obtained by dividing the body weight by the square of the height (kg/m2). Participants were divided into four groups based on their BMI values: underweight (BMI < 18.5 kg/m2), normal weight (≥18.5 kg/m2 and <24 kg/m2), overweight (≥24 kg/m2 and <28 kg/m2), and obese (BMI ≥ 28 kg/m2) according to the Guidelines for the Prevention and Control of Overweight and Obesity in Chinese Adults (2003). Sociodemographic variables such as age, gender, and income level and lifestyle variables such as alcohol consumption, smoking status, and physical activity level (PAL) were obtained using well-validated questionnaires distributed by trained interviewers. Information regarding alcohol consumption was divided into two groups according to frequency: “yes” (consumed alcohol more than once in the past year) or “no.” Information regarding smoking status was divided into three groups: “current smoker” (still smoking), “past smoker” (previously smoking but currently not smoking), or “never smoker”.
PAL included the following three domains: transportation activities, occupational activities, and sports. PAL was measured in terms of metabolic equivalent of task (MET) minutes in each week [17,18], which were converted using the time spent on each activity. The MET scores for each activity were based on the 2011 Compendium of Physical Activities. Physical activity was also divided into three categories: light PAL (<600 MET minutes/wk), moderate PAL (≥600 MET minutes/wk and <3000 MET minutes/wk), and vigorous PAL (≥3000 MET minutes/wk) [18,19].
The area of residence was categorized into “rural” and “urban”. According to the results of the questionnaire, “urban neighborhood” (primary sampling units = 36) and “suburban neighborhoods” (primary sampling units = 36) were classified as “urban”; “towns” (primary sampling units) and “rural villages” (primary sampling units = 108) were classified as “rural”. Other covariates that were defined in the model included age (years), educational level (less than primary school, middle school, technical school, college, or university or above), and ethnicity (Han, other ethnicities).

Participants’ general characteristics, such as age, income level, BMI, obesity, alcohol consumption, smoking status, PAL, and nutrient intake were analyzed using the generalized linear model and chi-square test for continuous and categorical variables, respectively, according to the quartiles of LCD scores based on gender. Moreover, all results for the continuous variables are presented as the mean ± standard error, and the results for the categorical variables are presented as n (%). After adjusting for potential confounding variables (including age, educational level, body mass index, ethnicity, physical activity level, alcohol consumption, smoking status, and individual income), logistic regression models were used to calculate the odds ratios (ORs) of dyslipidemia and their 95% confidence intervals (95% CIs). All statistical analyses were performed using the Statistical Analysis System software version 9.4. A p value < 0.05 was considered statistically significant.

In conclusion, among Chinese males, the group with higher LCD scores has a higher fat intake (especially animal-based fat), a diet pattern that is closer to a LCD, and greater odds of hypercholesterolemia and hypertriglyceridemia. We advise that people should pay more attention to the proportion of macronutrients in their diet, especially animal-based fat. The association between LCD score and dyslipidemia is significantly complex. In the future, careful attention should be paid to the quality of macronutrients for preventing dyslipidemia in the Chinese population. Further prospective studies and those involving detailed dietary nutrient intake evaluations are required to verify these findings in Chinese and other populations.

This work was supported by the National Research Foundation of Korea (NRF) grant funded by the Korea government (MSIT) (No.2020R1C1C1014286). MSIT: Ministry of Science and ICT.

This study uses data from the CHNS. We thank the National Institute for Nutrition and Health, China Center for Disease Control and Prevention, Carolina Population Center (P2C HD050924, T32 HD007168), the University of North Carolina at Chapel Hill, the NIH (R01-HD30880, DK056350, R24 HD050924, and R01-HD38700), and the NIH Fogarty International Center (D43 TW009077, D43 TW007709) for their financial support for CHNS data collection and analysis from 1989 to 2015 and future surveys. We also thank the China–Japan Friendship Hospital and the Ministry of Health for support for the CHNS 2009, the Chinese National Human Genome Center at Shanghai since 2009, and Beijing Municipal Center for Disease Prevention and Control since 2011. 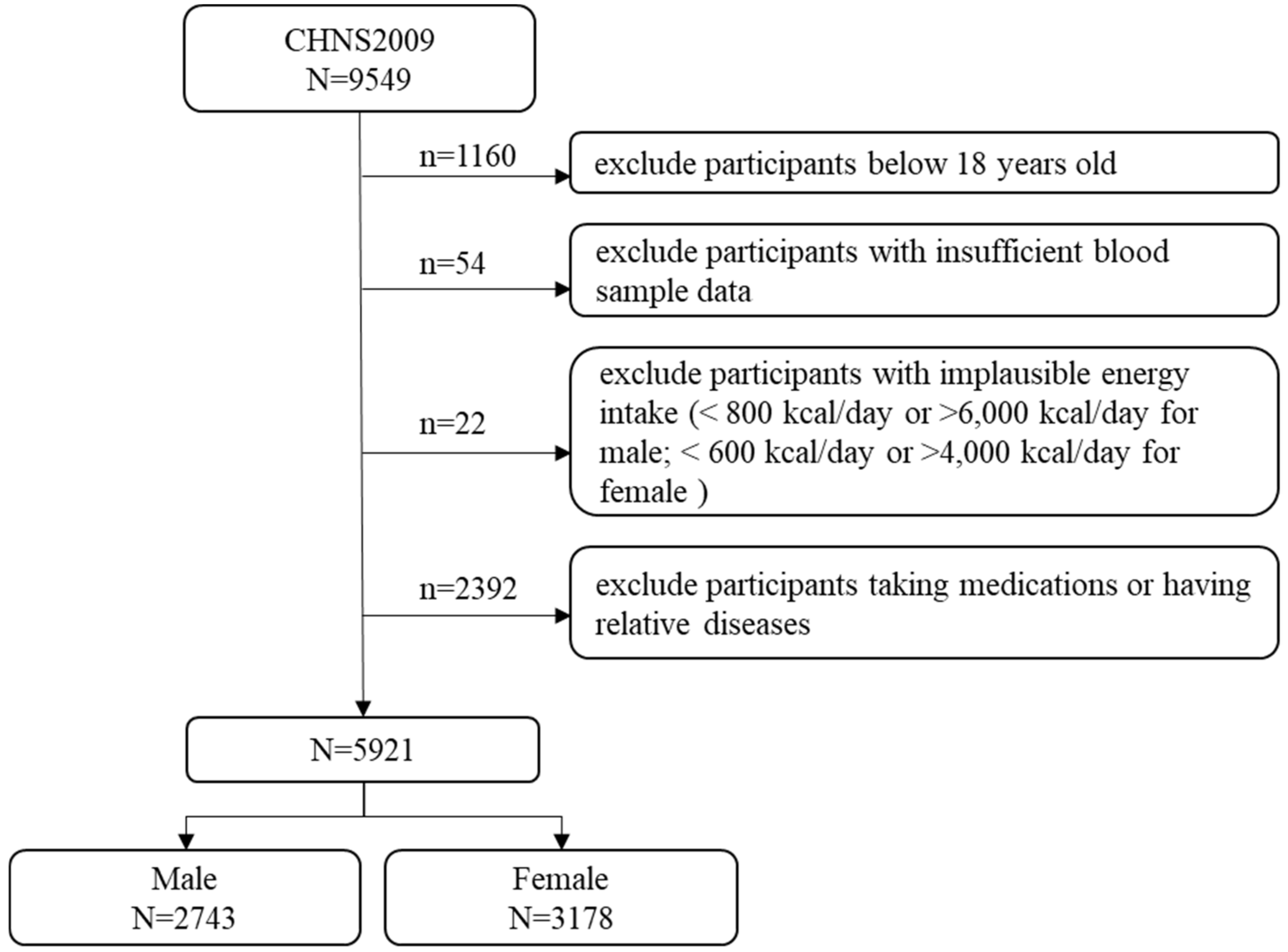