Change in Growth and Diet Quality Among Preschool Children in Tokyo, Japan
Previous Article in Journal

:
Fruit consumption is recommended as part of a healthy diet. However, consumption of fruit in the form of juice is positively associated with type 2 diabetes risk, possibly due to resulting hyperglycemia. In a recent study, fruit juice prepared by nutrient extraction, a process that retains the fiber component, was shown to elicit a favorable glycemic index (GI), compared to eating the fruit whole, in healthy weight adults. The current study expanded on this to include individuals with obesity, and assessed whether the nutrient extraction of seeded fruits reduced GI in a higher disease risk group. Nutrient extraction was shown to significantly lower GI, compared to eating fruit whole, in subjects with obesity (raspberry/mango: 25.43 ± 18.20 vs. 44.85 ± 20.18, p = 0.034 and passion fruit/mango (26.30 ± 25.72 vs. 42.56 ± 20.64, p = 0.044). Similar results were found in those of a healthy weight. In summary, the current study indicates that the nutrient-extraction of raspberries and passionfruit mixed with mango lowers the GI, not only in healthy weight individuals, but also in those with obesity, and supports further investigation into the potential for nutrient extraction to enable increased fruit intake without causing a high glycemic response.
Keywords:
glycemic index; obesity; raspberry; passionfruit; postprandial

Fruit consumption has beneficial health effects that correlate with the decreased risk of several chronic diseases [1]. As a consequence, public health agencies consistently promote the protective health effects of fruit. However, fruit juice is known to cause a postprandial peak in blood glucose, and it is advised to limit juice intake due to this high glycemic index (GI). Consistent with the effect on GI, research from large cohort studies has shown an association between fruit juice consumption and an increased risk of type 2 diabetes (T2DM) [2,3]. It has been suggested that the decrease in fiber per serving of fruit juice compared with whole fruit may explain the increased risk of T2DM.
Recommendations to increase fruit intake have increased the popularity of ‘nutrient-extraction’ blenders that homogenize whole fruit to create ‘smoothies’ without the removal of fiber. This form of processing is in contrast to traditional juicers that eliminate pulp, with most of the current GI-focused literature being based upon studies using fruit juice devoid of pulp. The impact on health of the consumption of fruit that has been nutrient-extracted, rather than juiced in a traditional manner, therefore remains unclear, and requires investigation for public health guidance. It is particularly important to understand the effect on the glycemic response in individuals susceptible to glucose intolerance, such those with obesity, as this population is more susceptible to T2DM onset [4]. These disease-susceptible individuals also make up an ever-increasing proportion of the population in high income countries, such as the UK (63%) [5].
Findings from an earlier study in young, healthy adults demonstrated that the consumption of mixed fruit following nutrient extraction resulted in a significant lowering of the GI, compared with the non-extracted (whole) fruit [6]. In contrast to the fruit mixture, the nutrient extraction of mango as a single fruit had no effect on the GI. These findings suggested, that in contrast to conventionally prepared fruit juice, fruit juice prepared by nutrient extraction in some cases elicits a more favorable postprandial glycemic response than whole fruit.
Notably, even for high GI fruits like mango, nutrient extraction did not worsen the response. The mechanism responsible for this effect was unclear, and it was also unknown whether a similar response would be elicited in older or overweight sample groups.
The aim of the current study was to extend the investigation into the effect of nutrient extraction on the postprandial glycemic response to individuals with obesity. As nutrient extraction retains the fibrous pulp, it has been hypothesized that use of fruits with seeds will lower the glycemic response, as the fiber (and fats/proteins) from the seeds will be released and become available. This is compared to eating the whole fruit, where most seeds will remain intact. The effect of seeded fruit (raspberries and passionfruit) combined with mango, on the nutrient extraction effect, was therefore also studied.

Participants considered as of healthy weight (BMI < 25 kg/m2) or obese (BMI > 30 kg/m2) were recruited to the study. Two groups of healthy weight participants were recruited for the completion of raspberry (n = 15) and passionfruit arms (n = 12), respectively. Participants with obesity completed both study arms (n = 12). There were three dropouts from the study, due to not completing all of the tests (two with healthy weight in the passionfruit arm, and one with obesity). Therefore, from the original 39, a total of 36 participants completed one or both arms of the study. All participants completed a health screening questionnaire. Exclusion criteria were pregnancy, age <18 years, fruit allergy, known diabetes, and use of medication known to interfere with glucose homeostasis or intestinal absorption. Written, informed consent was obtained from participants, and the study was approved by the Research Ethics Committee of the Faculty of Science and Engineering.

Two different seeded fruits were investigated: raspberries mixed with mango, and passionfruit mixed with mango. The raspberry arm consisted of 162 g raspberries and 114.2 g of mango in each test meal, and the passionfruit arm consisted of 150 g passionfruit and 114.2 g mango in each test meal.
Two test meals were provided for each study arm: (i) whole fruit or (ii) nutrient-extracted fruit, with both meals containing 25 g total sugar per serving (Figure 1). Total sugar was calculated from a high performance liquid chromatography (HPLC) analysis of raspberry, passionfruit and mango, with 12.5 g of total sugar coming from each of the two fruits used in each arm of the study. Meals were prepared on the morning of the test. Nutrient-extracted servings were processed freshly in a 600 W, 20,000 r.p.m. blender (Nutribullet 600, Nutribullet LLC, Pacoima, CA, USA) for 30 s with 125 mL water, transferred to a plastic cup, and sealed. Whole-fruit servings were cut into bite-sized pieces, transferred to a container, and consumed with 125 mL of water. The control arm of 25 g glucose was dissolved in 125 mL water. Test meals (glucose control, nutrient extracted or whole fruit) were consumed in a random order (Figure 1).

A crossover design was used for this study, with each participant serving as their own control. Participants consumed each test meal or control, with a minimum 2-day washout period between test days. Participants fasted for 12 h overnight, and avoided alcohol, caffeine and vigorous exercise in the 24 h preceding testing. Fasting glucose levels were obtained via a finger prick blood sample on arrival at 9 am (Accu-Check Advantage, Roche, Welwyn Garden City, UK). Testing began with the first oral contact with the test meal, which was then consumed over a 15-min period, with 125 mL of water for the whole fruit test. Postprandial blood glucose levels were determined at 15, 30, 45, 60, 75, 90, 105 and 120 min for each condition.
The glycemic index (GI) was calculated from the incremental area under the 120 min glucose response curve for each test meal. The incremental area under the curve for each test meal was expressed as the percentage of the mean area under the glucose control curve for the same subject. These values were used to calculate the GI values for each test meal using methods described by Brouns et al. [7].

Data were analyzed using the SPSS 23 Statistical software (IBM Corp, Armonk, NY, USA). All data were assessed for normal distribution of values. A one-way repeated-measures analysis of variance (ANOVA) was used to identify the significant differences of GI between test meals for all participants together, and for the different BMI groups. Post-hoc tests were conducted for each time point using the LSD method for multiple comparisons. In order to test the effect of sample size, Cohen’s (1988) criteria was conducted [8].
Data are reported as mean values ± SEM in figures, or mean with SD in text and tables, unless otherwise stated, and significant differences were considered at p < 0.05.

This research was funded by Farid M. Jamjoom specialised company Ltd., but the funders have had no input into the research at any stage.

The authors would like to thank Vicki Cammack and Natalie Sweet for their technical support and expertise, and student investigators Matthew Sharp, Justyna Gomulka and Millie Smail. We would also like to thank all the participants for their time. 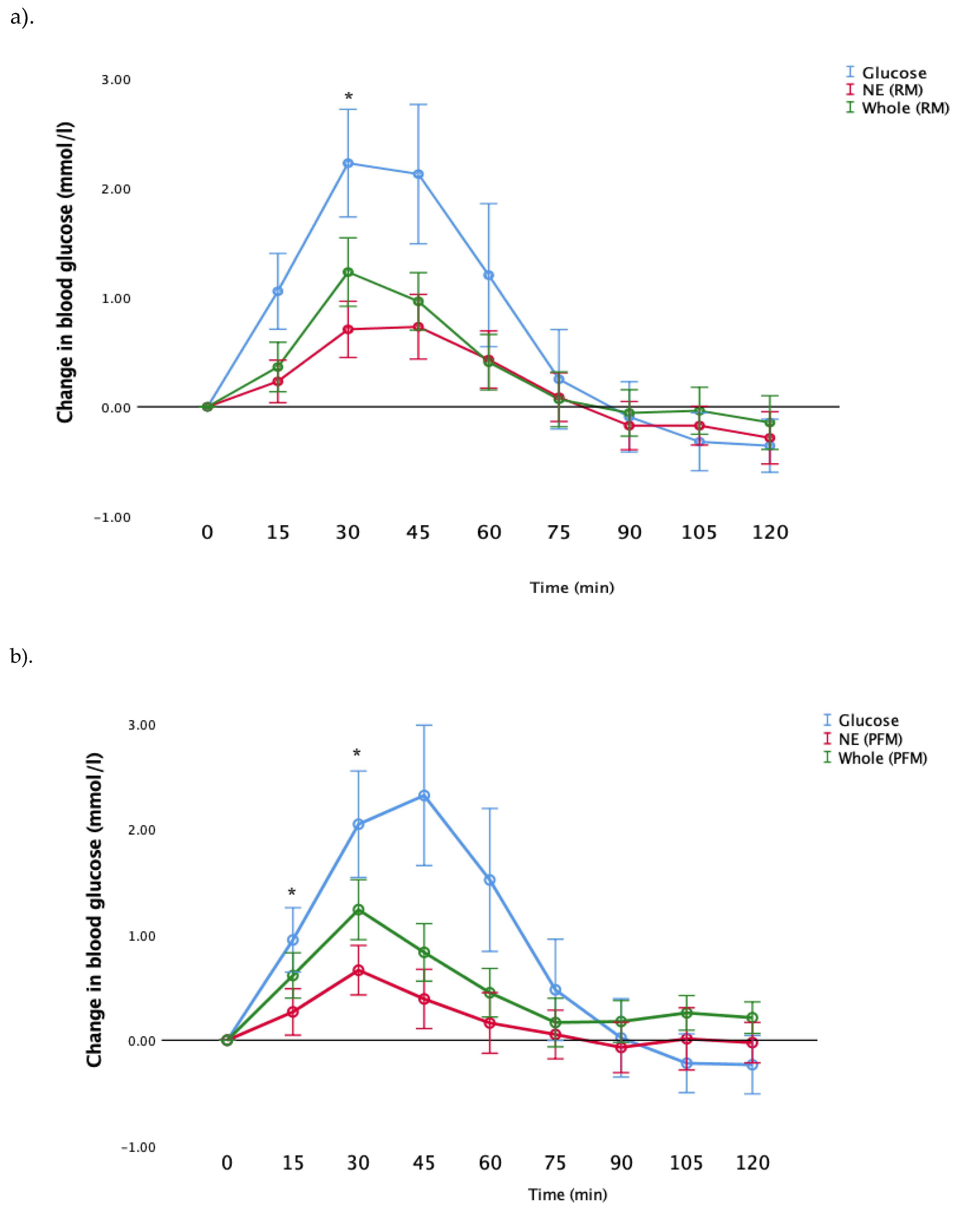 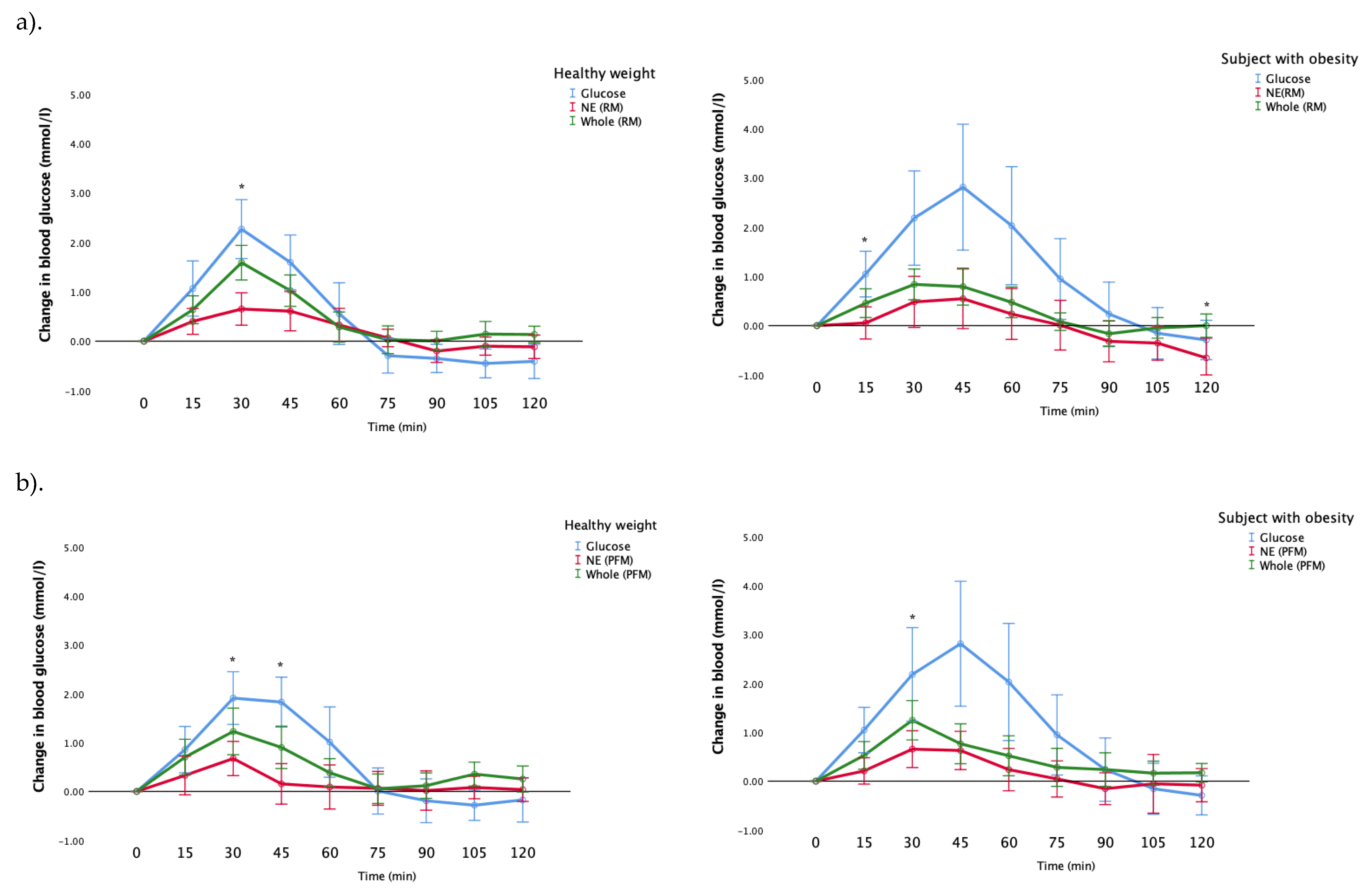