Effects of Yeast Mannan Which Promotes Beneficial Bacteroides on the Intestinal Environment and Skin Condition: A Randomized, Double-Blind, Placebo-Controlled Study

Free and glycosylated sesquiterpene lactones (SLs), which are abundant in leafy vegetables including Brussels/witloof chicory, possess health-promoting effects in vivo. However, the pharmacokinetics of dietary source of SLs remain largely unknown. In this open-label and single-dose trial, sixteen healthy volunteers consumed 150 g of Brussels/witloof chicory juice containing 48.77 μmol SLs in 5 min. Blood, urine, and fecal samples were collected before and after chicory consumption in 24 h. No SLs were detected in the serum, urine, and fecal samples before chicory consumption in all of the participants. Chicory consumption increased lactucin, 11β,13-dihydrolactucin, and their glucuronide/sulfate conjugates, rather than lactucopicrin and 11β,13-dihydrolactucopicrin, as well as glycosylated SLs in biological samples. The peak concentration of total SLs in serum reached 284.46 nmol/L at 1 h, while, in urine, this peak was 220.3 nmol between 2 and 6 h. The recovery of total SLs in blood, urine, and feces was 7.03%, 1.13%, and 43.76% of the ingested dose, respectively. Human fecal suspensions with intestinal microbiota degraded glycosylated SLs in chicory, and converted lactucopicrin and 11β,13-dihydrolactucopicrin to lactucin and 11β,13-dihydrolactucin, respectively. Collectively, Brussels/witloof chicory SLs are poorly bioavailable and they undergo partial gut microbial and phase II metabolism in humans.
Keywords: bioavailability; Brussels/witloof chicory; gut microbiotic metabolism; phase II metabolism; pharmacokinetics; sesquiterpene lactones bioavailability; Brussels/witloof chicory; gut microbiotic metabolism; phase II metabolism; pharmacokinetics; sesquiterpene lactones

Sesquiterpene lactones (SLs) are a colorless, bitter, and stable subfamily of terpenes [1]. Over 5000 structures of SLs are widely distributed within the plant kingdom, most of which are derived from the family Asteraceae [2]. Lettuce and chicory (Lactuca sativa and Chicorium intybus L.) that belong to the family Asteraceae are the leading sources of SLs in the human diet [3]. The principal constitutive SLs in lettuce and chicory are lactucin, 11β,13-dihydrolactucin, lactucopicrin (esterified lactucin), and 11β,13-dihydrolactucopicrin (esterified 11β,13-dihydrolactucin), in either free or glycosylated form [4,5].
Lactucin, lactucopicrin, and 11β,13-dihydrolactucin have been reported to possess considerable analgesic and sedative activities in mice [6]. These capacities were comparable to ibuprofen, which is a widely used nonsteroidal anti-inflammatory drug [6]. We recently found that SLs-rich Brussels/witloof chicory (Chicorium intybus L. var. foliosum), one variety of chicory, is able to slow down the progression of established atherosclerosis in mice [7,8]. More importantly, SLs-rich chicory and lettuce have been used in traditional medicines globally for centuries [9,10]. Last but not least, several in vitro cell culture studies have shown that lactucin or lactucopicrin possesses appreciable biological activities, such as anti-malarial [11], anti-cancer [12,13], and neuroprotection [14,15]. Overall, SLs-rich foods might be considered to be part of a healthy, balanced diet.
Illustration of the bioavailability and metabolism of any exogenous compounds is fundamental in understanding their impacts on health states in vivo. Very recently, García et al. found, for the first time, that lactucin and lactucopicrin from curly escarole, one leafy vegetable from the family Asteraceae, are orally bioavailable and undergo gut microbiotic metabolism (dehydroxylation and reduction) and phase II metabolism (glucuronidation and sulfation) in healthy humans [16], as evidenced by a qualitative analysis of SLs and these metabolites in urine. However, the significance of this pharmacokinetic study might be limited by a lack of quantification for lactucin and lactucopicrin in curly escarole, a few participants (three males and two females), absence of quantification for lactucin and lactucopicrin, and these metabolites in the urine, blood, and feces, as well as no dietary restrictions in order to ensure that lactucin and lactucopicrin during the intervention were derived from curly escarole alone. Moreover, the fate of glycosylated SLs in curly escarole were not traced after these oral consumption.
In the current study, we used both qualitative and quantitative approaches to evaluate the absorption, metabolism, and excretion of SLs in sixteen healthy humans after oral intake of Brussels/witloof chicory. Meanwhile, the metabolism of SLs from Brussels/witloof chicory by human fecal suspensions in the presence or absence of intestinal microbiota was investigated.

A detailed description of the clinical pharmacokinetic study in eight male and eight female healthy participants (body mass index, 19–24.7 kg·m−2; aged 27–51 years) was recently published [17]. Briefly, each participant after an overnight fast (>12 h) drank up a single dose of Brussels/witloof chicory juice containing 150 g of Brussels/witloof chicory in 5 min. All of the participants provided blood (baseline, 0.5, 1, 2, 4, 6, 12, 24 h), urine (baseline, individual voids between 0 and 2 h, 2 and 6 h, 6 and 12 h, and 12–24 h), and fecal samples (baseline, all voids between 0 and 24 h). The volume of urine and weight of feces excreted was measured, and aliquots were stored at −80 °C before analysis by using high-performance liquid chromatography (HPLC). Of note, all of the participants followed a diet free of vegetables, fruits, and plant-based beverages for the day before the intervention and the intervention day, which were to limit any residual dietary SL compounds from the body and also ensure that SL compounds that were present in biological samples collected during the intervention came from Brussels/witloof chicory juice alone. The study was registered at http://www.chictr.org.cn/showproj.aspx?proj=24307 as ChiCTR1800014393.

Free and glycosylated SLs in Brussels/witloof chicory were isolated and analyzed, as previously described [18]. Briefly, 0.5 g of freeze-dried Brussels/witloof juice powder were mixed with the internal standard (0.41 μmol of santonin). The sample was than extracted twice by 2% (v/v) formic acid in methanol/water 4/1 (v/v). All of the supernatants were dried by nitrogen flow, recovered with methanol, and then divided into two parts. One part was used to quantify free SLs, and another underwent an enzymatic hydrolysis with cellulase enzyme (activity: 0.8 units/mg) to convert glycosylated SLs into their free forms (to catalyze the hydrolysis of glycosidic bonds in order to remove sugars from glycosylated SLs) [4]. Both free and glycosylated SL-containing fractions were purified from phenols and interfering compounds by solid phase extraction, employing Silica cartridges (Bond Elut SI cartridge, 500 mg, 3 mL) from Agilent Technologies (Santa Clara, CA, USA). Briefly, after conditioning and equilibrating the solid phase extraction cartridges, the samples were loaded and eluted with dichloromethane/ethyl acetate 3/2 (v/v). The loading and elution fractions were collected, evaporated under vacuum at 35 °C, and then recovered with methanol/water 1/1 (v/v) before high-performance liquid chromatography (HPLC) analysis.
The serum, urine, and fecal samples from each participant were prepared, as previously described [19]. In brief, aliquots of homogeneous serum (600 μL), urine (600 μL) or fecal (0.5 g) samples were spiked with the internal standard (0.24 nmol of santonin) and treated according to one of the four following procedures: no treatment (to detect free SLs); cellulase (to detect glycosylated SLs); β-glucuronidase (to detect glucuronidated and sulfated SLs); or, sulfatase in the presence of d-saccharic acid 1,4-lactone (to detect sulfated SLs) [18,19,20]. The levels of glycosylated and sulfated SLs were indirectly calculated by subtracting free form of SLs in the raw materials (Brussels/witloof chicory, serum, urine, or feces) from those in the cellulase- and sulfatase-treated materials, respectively. The levels of glucuronidated SLs were indirectly calculated by subtracting SLs in the sulfatase-treated materials (serum, urine, or feces) from those in the β-glucuronidase. Thereafter, 2400 μL of methanol was added to 600 μL serum or urine sample in a sealed glass vial. 3 mL of normal saline and methanol (1:3, v/v) was then added to 0.5 g fecal sample. After vortexing, the sample vials were centrifuged at 14,000 rpm for 10 min. The serum, urine, or fecal supernatant was collected and purified by solid phase extraction before HPLC analysis. Of note, the use of santonin was required for accurate quantification, because it permitted taking the losses due to SLs extraction and further analytical treatments into account [18].

SLs in Brussels/witloof chicory and biological samples were measured by a HPLC assay, as previously described with minor modifications [18]. HPLC analyses were carried out on a Waters 2695 Alliance HPLC (Waters Corp., Milford, MA, USA) with a photodiode array detector (mod. 2998). SL elution was carried out in gradient mode while employing the following solvent system: mobile phase A: methanol/water 14/86 (v/v); mobile phase B: methanol. The gradient program was as follows: from 0 to 20 min, 100–58% A; from 20 to 30 min, 58–42% A; from 30 to 45 min, 42–10% A; from 45 to 46 min, 0–100% A; and, from 46 to 55 min, 100% A as post-run. The flow rate was 0.5 mL/min, and the injection volume was 20 μL. The data were processed by the software Empower (ver. 3.0) from Waters. Each chromatogram was recorded at 260 nm, whereas the absorption spectra were recorded between 200 and 400 nm. The column was a Zorbax SB-C18 (250 mm × 4.6 mm, 5.0 μm) column from Agilent Technologies. The analyses were performed at 25 °C. For each analytical run, a standard curve was prepared in the appropriate matrix (methanol, blank serum, urine, or feces) and used to quantify the content of SL in chicory or biological samples. Standard curves were constructed from the peak area ratios of the analyte to internal standard (santonin) versus analyte concentrations while using a 1/x2 weighted linear least-squares regression model. The detection limit for lactucin, 11β,13-dihydrolactucin, lactucopicrin, and 11β,13-dihydrolactucopicrin (10-fold baseline noise) under the conditions used in this study was between 9.06 and 12.59 nmol/L in methanol, 9.06 and 14.39 nmol/L in serum, 9.06 and 12.59 nmol/L in urine, and 10.87 and 12.59 nmol/L in feces, and values that were below this concentration were reported as zero. Of note, recoveries of SL were higher than 82.4% in methanol, serum, urine, and feces. The intra- and inter-day variations were below 9.52% in all sample types. Santonin was selected as the internal standard.

The data are presented as the means ± SEM. The significance of differences between the baseline (0 h) and the indicated time points was assessed by ANOVA for repeated measures and the Dunnett’s 2-tailed t test, while assuming the baseline values as the reference category. p < 0.05 was considered to be statistically significant.

3.2. SLs and Metabolites in Serum, Urine and Feces

3.3. Recovery of SLs and Metabolites in Serum, Urine and Feces

We provided evidence that SLs from Brussels/witloof chicory are likely to be poorly absorbed and undergo partial gut microbial and phase II metabolism in humans. Because SLs possess appreciable pharmacological effects in preclinical models, it is of interest to investigate whether Brussels/witloof chicory and other SLs-rich foods (e.g, curly escarole, lettuce, and radicchio) recapitulate their effects in humans.

We thank Lin Zheng for excellent technical assistance with this project. 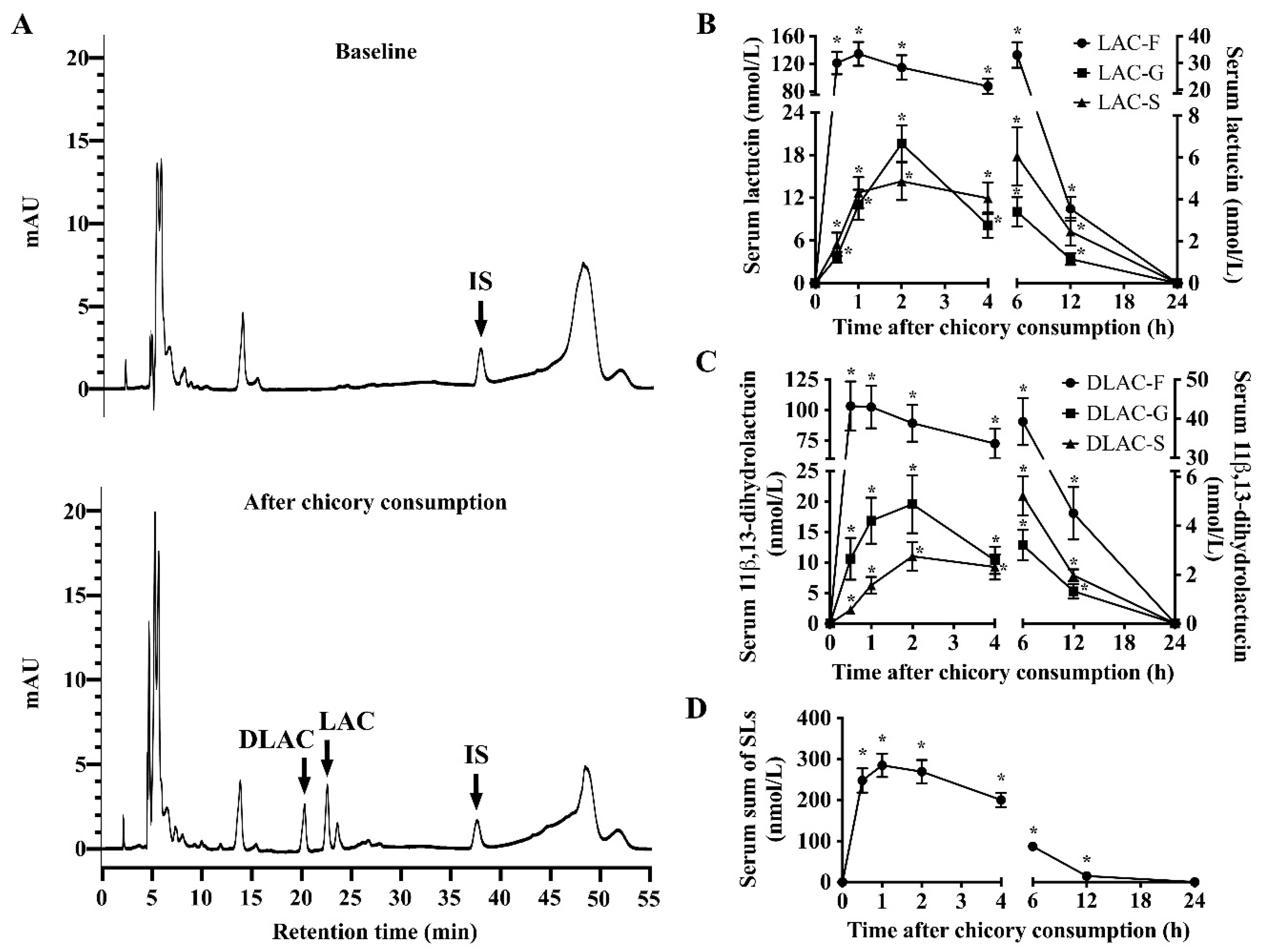 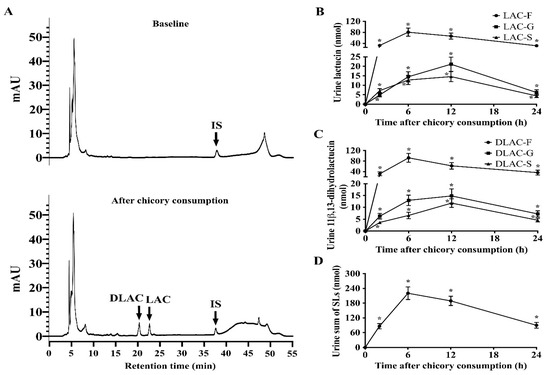 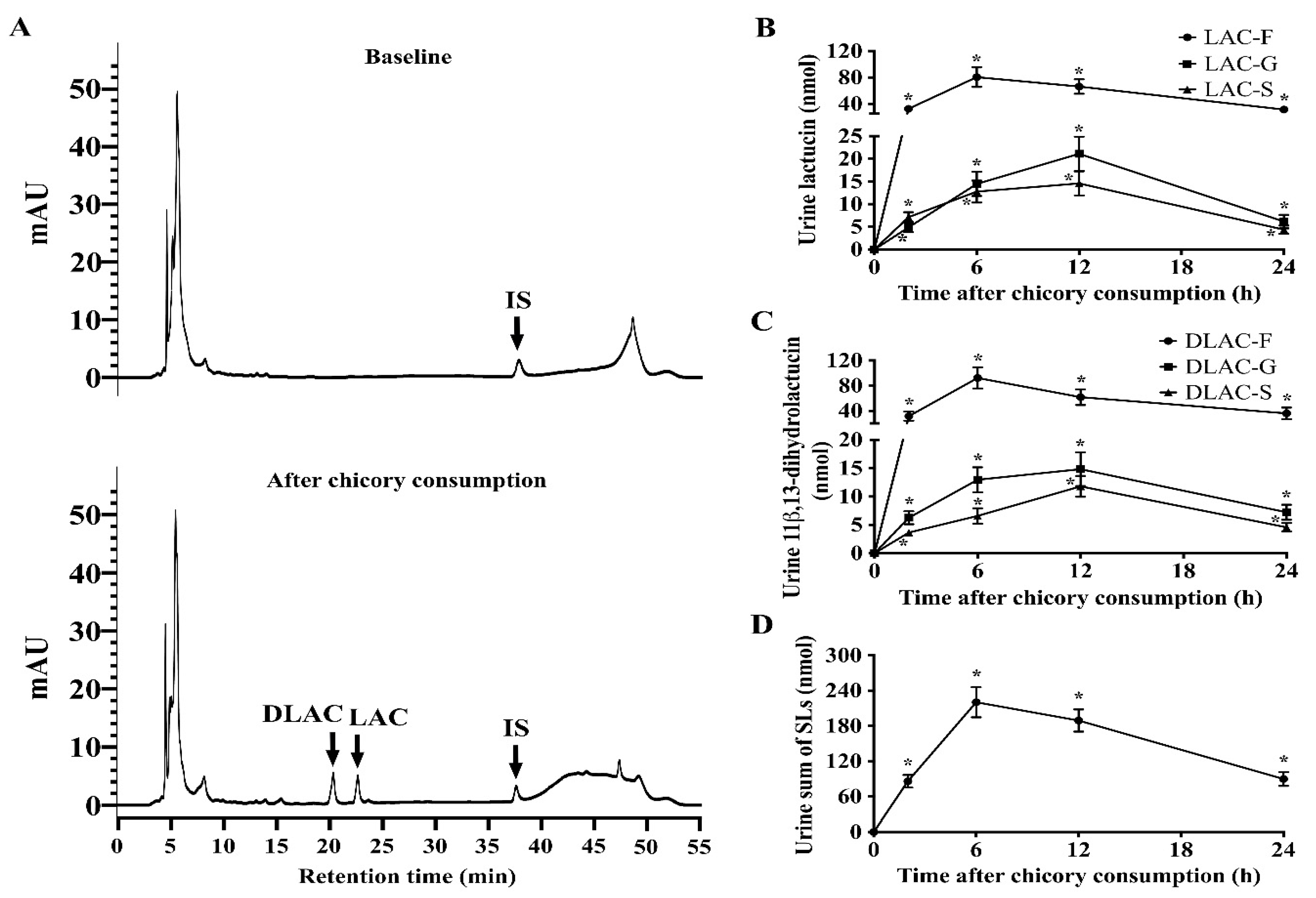