Identifying the Profile of Orthorexic Behavior and “Normal” Eating Behavior with Cluster Analysis: A Cross-Sectional Study among Polish Adults

A total of 230 participants (175 females, 55 males; Mage = 26.52 ± 7.65; age range: 18–60) were recruited through convenience sampling through several universities, companies and health centers in Poland. Of the 313 individuals who received the questionnaires, 254 (81.15%) returned them. Finally, from those, 230 questionnaires (73.48%) were recognized as completed to provide reliable data.
The survey was administered via the Internet. Participants received notice about the research with the announcement including the online link to the study. Interested individuals were invited to visit a website that directed them to the consent form, information form (purpose of the current study, anonymity, voluntariness of consent to research), and questionnaires. All participants offered their informed consent before starting the survey and responded voluntarily to the survey. There was no financial compensation for participating in the study.
The present study has been approved by the SWPS University of Social Sciences and Humanities Human Research Ethics Committee (No. WKEB59/05/2019). All procedures performed in our study were in accordance with the 1964 Helsinki declaration (adopted by the 18th World Medical Association General Assembly, Helsinki, Finland) and its later amendments or comparable ethical standards.

The Düsseldorf Orthorexia Scale is a 10-item unidimensional questionnaire assessing and screening ON. A score of 30 or higher indicates the presence of ON. A score between 25 and 29 demonstrates a risk of developing ON, while a total score of less than 25 identifies the absence of ON [29]. The DOS shows good internal consistency (Cronbach’s alpha = 0.84) and good test-retest reliability (r = 0.67 to 0.79, p = 0.001) [19]. In the current sample, Cronbach’s alpha coefficient of the DOS was 0.84. In the present study, we used the Polish version of this questionnaire (PL-DOS) [37].

The TFEQ-R18 [38] is an 18-item self-report questionnaire assessing three different aspects of eating behaviors: (1) cognitive restraint—a conscious restriction of food intake in order to control body weight or to promote weight loss, (2) uncontrolled eating—a tendency to eat more than usual due to a loss of control over intake accompanied by subjective feelings of hunger, and (3) emotional eating—an inability to resist emotional cues, the tendency to eat in response to negative emotions. In the present study, we used the Polish version of the TFEQ-R18 [30], which has demonstrated satisfactory levels of internal reliability (α = 0.78 for cognitive restraint, α = 0.84 for uncontrolled eating and α = 0.86 for emotional eating). In the present sample, Cronbach’s alpha coefficients of the TFEQ-R18 ranged from 0.78 to 0.88.

The EDI [39] is a 64-item widely used self-report questionnaire assessing the presence of eating disorder psychopathology and related features: (1) drive for thinness—an excessive concern with dieting, preoccupation with weight and entrenchment in an extreme pursuit of thinness, (2) bulimia—a tendency toward episodes of uncontrollable overeating (bingeing) and followed by the impulse to engage in self-induced vomiting, (3) body dissatisfaction—the belief that specific parts of the body associated with shape change or increased “fatness” at puberty are too large, (4) ineffectiveness—the feelings of general inadequacy, insecurity, worthlessness and the feeling of not being in control of one’s life, (5) perfectionism—an excessive personal expectations for superior achievement, (6) interpersonal distrust—a sense of alienation and a general reluctance to form close relationships, (7) interoceptive awareness—a lack of confidence in recognizing and accurately identifying emotions and sensations of hunger or satiety, and (8) maturity fears—a wish to retreat to the security of the preadolescent years because of the overwhelming demands of adulthood. In the present study, we used the Polish version of the EDI [40], which has shown a satisfactory internal consistency (α = 0.65 to 0.92). In the current sample, Cronbach’s alpha coefficients of the EDI subscales ranged from 0.50. to 0.91.

The short form of the IPAQ (7-items) [41] assesses three specific types of activity: walking, moderate-intensity activities and vigorous-intensity activities in the last seven days. Subjects are asked to answer in order to record the number of days (frequency) and the number of minutes per day (duration) of their participation in all kinds of physical activity during the last seven days as well as the time spent sitting during an average weekday. The IPAQ has been validated and used widely [42,43] given its practicability in large samples. The adaptation of IPAQ-short into Polish followed the IPAQ committee guidelines (https://sites.google.com/site/theipaq/questionnaire_links; [44]). We used the combined total physical activity score: total physical activity MET (metabolic equivalent)-minutes/week = sum of walking + moderate + vigorous MET-minutes/week scores.

The OCI-R [45] is an 18-item self-report questionnaire assessing obsessive-compulsive disorder symptoms: (1) washing, (2) ordering, (3) hoarding, (4) mental neutralizing, (5) obsessing and (6) checking. The recommended cutoff score is 21, with scores at or above this level indicating the likely presence of OCD. The original version displayed evidence of good reliability and validity indices of the OCI-R, showing strong convergence with established measures of OCD, moderate to high internal consistency across the six subscales, and adequate to high test-retest stability [45]. In the present study, we used the Polish version of the OCI-R [46], which has presented adequate test reliability for the full scale and subscales scores, high internal consistency (0.62 < Cronbach’s α < 0.85) and confirmed satisfactory convergent and divergent validity [47]. In the present sample, Cronbach’s alpha coefficients of the OCI-R ranged from 0.64 to 0.88.
In addition, the participants were asked questions regarding socio-demographic characteristics (age, weight and height) and dietary patterns (omnivorous, vegetarian).

Statistical analyses were carried out using the Statistical Package for Social Sciences 25.0 (SPSS, Chicago, IL, USA). Patterns among specific samples can be concluded from the factor and cluster analyses. An exploratory factor analysis was conducted as the first step to classify patterns of the multiple factors associated with ON; the extraction was done using a promax rotation since the factors were correlated. Sample adequacy was guaranteed using the Kaiser–Meyer–Olkin (KMO) index and Bartlett’s Chi-square test of sphericity. Factors with an Eigenvalue >1 were retained. Items with factor loading >0.4 were considered as belonging to a factor. A cluster analysis, using the K-mean method, was conducted next using the results obtained in the exploratory factor analysis, in order to classify participants according to their patterns (into three clusters). The Chi-square test was used to compare DOS categories with categorical variables, whereas the ANOVA test was used to compare three or more means. Three multinomial regressions were conducted taking the ON categories as the dependent variable; in the first one, each scale was entered as a separate independent variable; in the second one, the factors obtained from the factor analysis were entered as independent variables, whereas in the third one, the clusters obtained from the cluster analysis were entered as independent variables.
The DOS total score did not follow a normal distribution as verified by the Shapiro–Wilk test; therefore, non-parametric tests were used. The Mann–Whitney and Kruskal–Wallis tests were used to check for an association between two and three or more means respectively, whereas the Spearman correlation test was used to check for an association between continuous variables. A forward linear regression analysis, taking the DOS total score as the dependent variable, was conducted; all variables that showed a p < 0.2 were considered as independent variables in order to eliminate confounding variables as much as possible. All models were adjusted over sociodemographic variables taken as covariates. p < 0.05 was considered significant.

3.2. Characteristics of the Study Population

3.3. Exploratory Factor Analysis for the Methods Used in the Present Study

The factor analysis for the scales’ scores was run over the whole sample. All items could be extracted and converged over a four-factor solution that had an Eigenvalue over 1, explaining a total of 63.40% of the variance (Factor 1: obsessive-compulsive disorder features; Factor 2: inappropriate eating and body-related behaviors; Factor 3: psychological and affective traits of eating disorders; Factor 4: perfectionism and behaviors associated with weight maintenance or weight loss); KMO = 0.854; Bartlett’s test of sphericity p < 0.001. According to the promax rotated matrix, the components are summarized in Table 2.

In the present study, we used a cluster analysis to identify distinct subgroups of Polish adults with and without ON and specific co-occurring behaviors. To the best of our knowledge, the present study was the first to investigate the profile analysis of different types of varying (“normal” or disturbed) eating patterns (related or not related with ON).
A cluster analysis can be used to identify separate groups of individuals with specific combinations of comorbid behaviors. This method can be used to develop targeted psychological interventions designed to improve health and eating outcomes. Future research could focus on collecting data from larger sample (both clinical and non-clinical) for the purpose of assessing the profile analysis of ON. Identifying individuals with ON based on their actual pattern of behaviors has the potential to be used in the psychological intervention focusing on improving their health and eating behaviors.

This research received no external funding. The APC was funded by Medical University of Warsaw, Poland.

A.B.-M. acknowledges the financial support by the “Excellence Initiative–Research University” program for years 2020–2026 for University of Wroclaw. 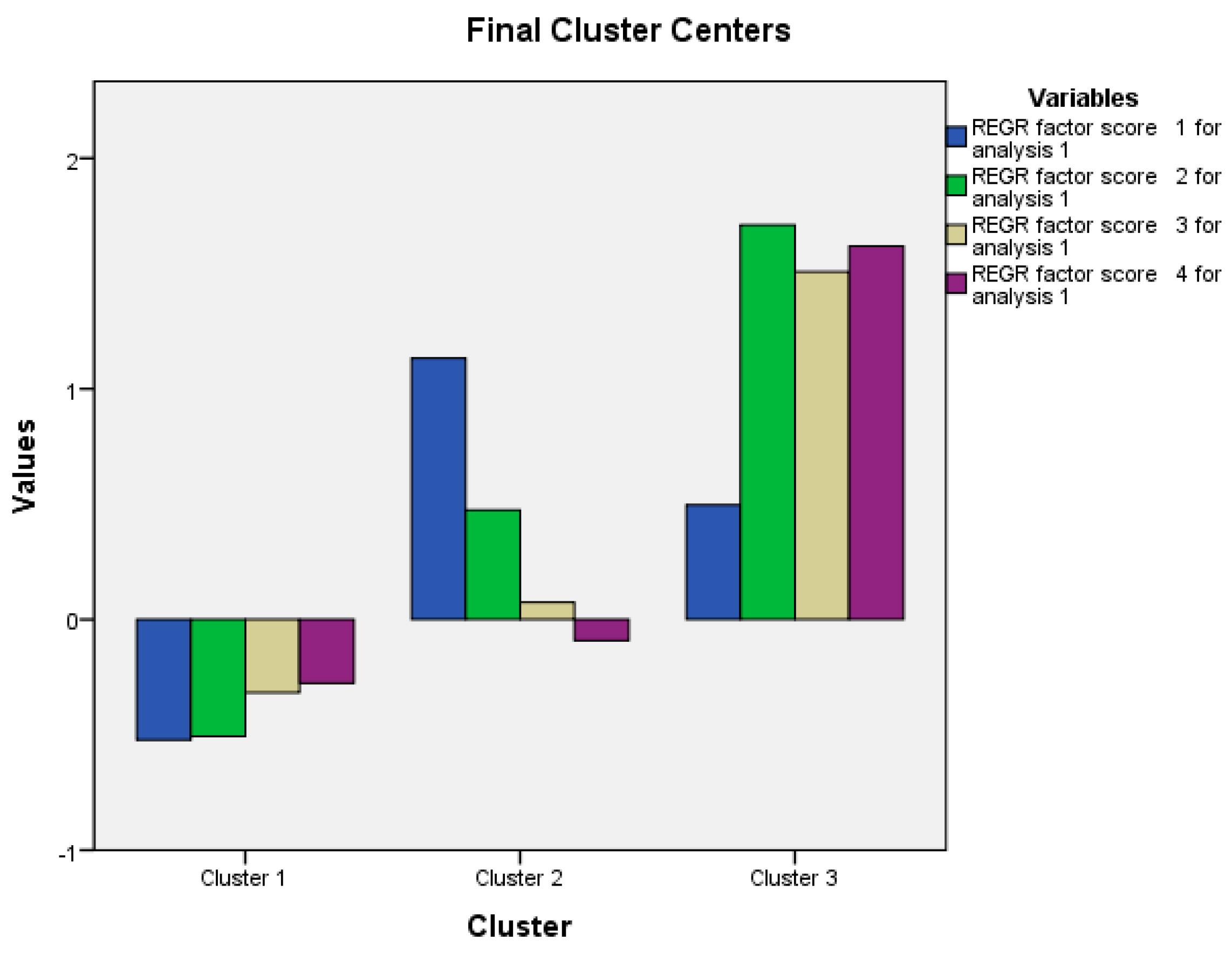