In Utero HIV Exposure and the Early Nutritional Environment Influence Infant Neurodevelopment: Findings from an Evidenced Review and Meta-Analysis

The developing brain is especially vulnerable to infection and suboptimal nutrition during the pre- and early postnatal periods. Exposure to maternal human immunodeficiency virus (HIV) infection and antiretroviral therapies (ART) in utero and during breastfeeding can adversely influence infant (neuro) developmental trajectories. How early life nutrition may be optimised to improve neurodevelopmental outcomes for infants who are HIV-exposed has not been well characterised. We conducted an up-to-date evidence review and meta-analysis on the influence of HIV exposure in utero and during breastfeeding, and early life nutrition, on infant neurodevelopmental outcomes before age three. We report that exposure to maternal HIV infection may adversely influence expressive language development, in particular, and these effects may be detectable within the first three years of life. Further, while male infants may be especially vulnerable to HIV exposure, few studies overall reported sex-comparisons, and whether there are sex-dependent effects of HIV exposure on neurodevelopment remains a critical knowledge gap to fill. Lastly, early life nutrition interventions, including daily maternal multivitamin supplementation during the perinatal period, may improve neurodevelopmental outcomes for infants who are HIV-exposed. Our findings suggest that the early nutritional environment may be leveraged to improve early neurodevelopmental trajectories in infants who have been exposed to HIV in utero. A clear understanding of how this environment should be optimised is key for developing targeted nutrition interventions during critical developmental periods in order to mitigate adverse outcomes later in life and should be a priority of future research. View Full-Text
Keywords: HIV; neurodevelopment; nutrition; breastfeeding HIV; neurodevelopment; nutrition; breastfeeding
►▼ Show Figures 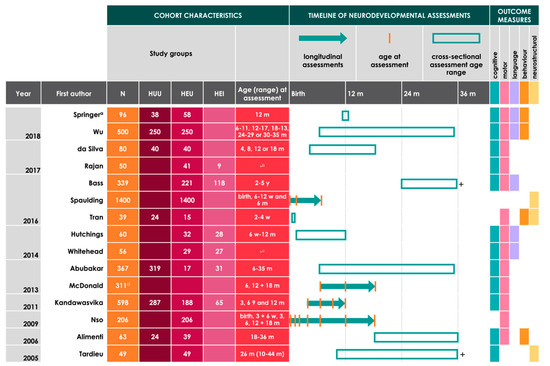