Lactoferrin Metal Saturation—Which Form Is the Best for Neonatal Nutrition?

The objective of this study was to evaluate the influence of high-fat (HF) and cafeteria diet (CAF) diets and sex on the metabolism of important fatty acids in the liver and perirenal fat tissue. Dietary treatments induced changes in the fatty acid profile in comparison to the untreated group, but the characteristic differences between treated groups were also observable. The HF diet induced an increase in the content of C16:1n-7 and C18:1n-7 in the liver phospholipids (PL) and triglycerides (TG) and perirenal fat tissue compared to the control and CAF diet. The CAF diet induced a more drastic decrease in both n-3 and n-6 polyunsaturated fatty acids (PUFA), including depletion of eicosapentaenoic acid (EPA). The CAF diet also increased the content of n-6 docosapentaenoic acid (DPAn-6) in the liver and decreased it in the perirenal fat. Sex also had a significant influence on the fatty acid profile, but the variables with the highest differences between the CAF and HF treatments were identical in the male and female rats. In this study, we have established that two dietary models of non-alcoholic fatty liver disease (NAFLD) led to characteristic changes in the hepatic and perirenal fat fatty acid profile, in contrast to the control diet and in comparison with each other. These differences could play an important role in the interpretation of the experimental results of nutritional studies. View Full-Text
Keywords: cafeteria diet; high-fructose diet; NAFLD; fatty acids cafeteria diet; high-fructose diet; NAFLD; fatty acids
►▼ Show Figures 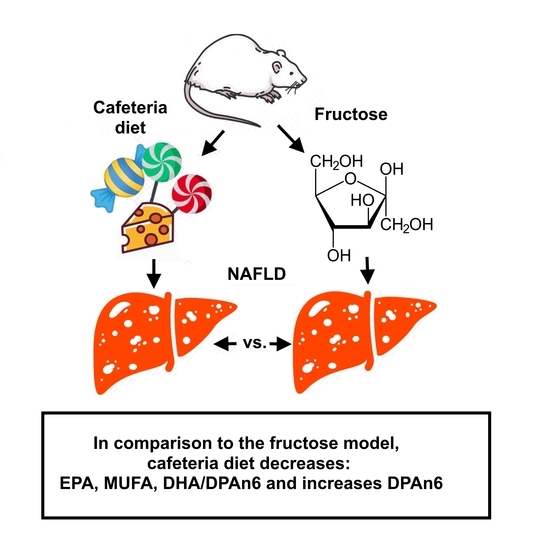