Effect of Maternal Docosahexaenoic Acid (DHA) Supplementation on Offspring Neurodevelopment at 12 Months in India: A Randomized Controlled Trial
Next Article in Special Issue

Socio-Demographic Characteristics, Dietary, and Nutritional Intakes of French Elderly Community Dwellers According to Their Dairy Product Consumption: Data from the Three-City Cohort
Previous Article in Journal

Milk and dairy foods are naturally rich sources of a wide range of nutrients, and when consumed according to recommended intakes, contribute essential nutrients across all stages of the life cycle. Seminal studies recommendations with respect to intake of saturated fat have been consistent and clear: limit total fat intake to 30% or less of total dietary energy, with a specific recommendation for intake of saturated fat to less than 10% of total dietary energy. However, recent work has re-opened the debate on intake of saturated fat in particular, with suggestions that recommended intakes be considered not at a total fat intake within the diet, but at a food-specific level. A large body of evidence exists examining the impact of dairy consumption on markers of metabolic health, both at a total-dairy-intake level and also at a food-item level, with mixed findings to date. However the evidence suggests that the impact of saturated fat intake on health differs both across food groups and even between foods within the same food group such as dairy. The range of nutrients and bioactive components in milk and dairy foods are found in different levels and are housed within very different food structures. The interaction of the overall food structure and the nutrients describes the concept of the ‘food matrix effect’ which has been well-documented for dairy foods. Studies show that nutrients from different dairy food sources can have different effects on health and for this reason, they should be considered individually rather than grouped as a single food category in epidemiological research. This narrative review examines the current evidence, mainly from randomised controlled trials and meta-analyses, with respect to dairy, milk, yoghurt and cheese on aspects of metabolic health, and summarises some of the potential mechanisms for these findings. View Full-Text
Keywords: dairy; health; matrix; metabolism; nutrient; composition; saturated fats dairy; health; matrix; metabolism; nutrient; composition; saturated fats
►▼ Show Figures 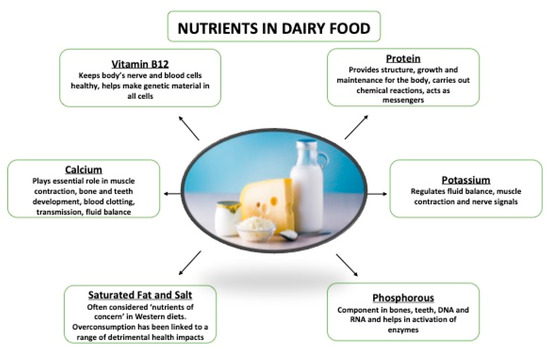