Dietary Patterns and Dietary Adaptations in Women With and Without Gestational Diabetes: Evidence From the Growing Up in New Zealand Study
Previous Article in Journal

Functional constipation is one of the most common gastrointestinal disorders in childhood. The worldwide prevalence of symptoms of constipation in children varies, with an estimated range of 0.3%−28% [1]. However, the treatments are mainly based on empiricism, and little evidence is available concerning the long-term efficacy. The pathophysiology of functional constipation is multi-factorial and is poorly understood at present. However, an important cause of constipation arises from intrinsic defects in the colonic function during the process of defecation [2].
The World Health Organization defines probiotics as “live microorganisms, which when administered in adequate amounts confer a health benefit on the host” [3]. Probiotics have long been generally considered to provide benefits in functional constipation, although few randomized clinical trials have evaluated the effects of probiotics, and data that support the role of probiotics, especially in children with functional chronic constipation, are limited and contradictory [4]. Furthermore, the evidence concerning comparisons between probiotics and placebo or other laxative medications is scarce and of poor quality [5,6].
Recently, studies on the human intestinal microbiome based on a metagenomics approach using next-generation sequencing have been dramatically progressing [7]. However, studies evaluating the relationship between changes in clinical symptoms of functional constipation and the intestinal microbiome are lacking. Molecular approaches based on the 16S rDNA gene sequence instead of culture-dependent technology are able to provide detailed classification and diversity information for taxonomy of microbes. Dysbiosis of the gut microbiota may contribute to constipation. Therefore, prebiotics, probiotics, synbiotics, and even fecal microbiota transplantation (FMT) were studied [8]. However, because the types of probiotics were various and the number of patients were small, it is difficult to evaluate the efficacy [8]. Additionally, genetic and non-genetic factors, including maternal and pregnancy-related factors, contribute to gut microbiota composition and the development of many conditions, including functional gastrointestinal disorders.
Lactobacillus (L.) reuteri DSM 17938 was suggested as a possible treatment for constipation by increasing defecation frequency [9]. However, more evidence is needed to clarify the relationship between L. reuteri DSM 17938, constipation, and defecation frequency. Therefore, the aim of our study was to evaluate the efficacy of the probiotic L. reuteri DSM 17938 and the laxative magnesium oxide (MgO) in children with chronic functional constipation. MgO is an osmotic laxative that has been used in Japan as a stool softener for decades [10]. We also analyzed the relationship between the clinical symptoms and the intestinal microbiome before and after treatment.

A prospective, double-blind, placebo-controlled, randomized, and parallel-group trial was conducted between January and December 2017. Randomization was performed by a permuted block method. Participants, care givers, and physicians were blinded after the assignment. The study was approved by the ethics committee of Wakayama University of Medicine (approval number 1883). Written informed consent was obtained from all parents.
In order to be eligible, patients had to be more than six months old or under six years of age, with a diagnosis of functional constipation according to the Rome IV criteria (constipation for at least one month and including at least two of the following criteria: two or fewer defecations per week, a history of excessive stool retention, a history of painful or hard bowel movements, a history of large-diameter stools, presence of a large fecal mass in the rectum, and incontinence after the acquisition of toileting skills) [11]. Children were collected from five pediatric outpatient clinics in Japan (clinic A: n = 2; B: n = 20; C: n = 15; D: n = 14; E: n = 9). Subjects with known organic causes of constipation, such as Hirschsprung’s disease, spina bifida, cow’s milk allergy, and metabolic disease, were excluded. All infants had started weaning. Before patients were included in the study, their baseline condition of constipation was evaluated over a period of two weeks using a defecation diary.
Sixty patients were randomly divided into three groups according to an automatically generated randomization list: group A (n = 20) received L. rueteri DSM 17938 and lactose hydrate as a placebo of MgO; group B (n = 19) received L. rueteri DSM 17938 and MgO and lactose hydrate; and group C (n = 21) received a placebo of L. rueteri DSM 17938 and MgO and lactose hydrate.

L. reuteri DSM 17938 was administered at a dose of 108 colony-forming units in 5 drops of a commercially available oil suspension (BioGaia AB, Stockholm, Sweden) 30 minutes after feeding, twice a day for four weeks. MgO was administered at a dose of 30 mg/kg of body weight per day. This study was double blinded and we used identical matching placebo and probiotic. The bottles of probiotic and placebo were completely identical. Because MgO (KENEI Pharmaceutical Co., Ltd.) is a raw material, we mixed the same amount of lactose hydrate for the actual drug. Lactose hydrate, which is a sweetening agent without any drug effect, was used for the placebo of MgO. Two physicians and two pharmacists examined the taste and texture of MgO and the placebo of MgO, and they confirmed that they were indistinguishable. All products were kept refrigerated during this study. The use of other laxatives, antibiotics, probiotics, fermented dairy products, and yogurt were not allowed a month before inclusion and during the study period, and a glycerin suppository was used only when there was no defecation for more than three days. All caregivers of patients, research staff, and physicians were blinded to which treatment group the patients belonged.

Defecation frequency was assessed with a defecation diary. The diary was evaluated by caregivers to check the defecation status (stool frequency, stool consistency and amount of stool). Stool consistency was scored according to the Bristol stool form scale [12] as type 1–7 (type 1: Separate hard lumps, such as nuts; type 2: sausage-shaped but lumpy; type 3: similar to a sausage or snake but with cracks on its surface; type 4: similar to a sausage or snake, smooth and soft; type 5: soft blobs with clear-cut edges; type 6: fluffy pieces with ragged edges, a mushy stool; type 7: watery, no solid pieces). The patients visited the outpatient clinic two weeks before administration and at zero, two, and four weeks after inclusion in the study. The gut microbiome was examined at the start and the end of the study period.
The primary clinical endpoint was defecation frequency at the fourth week after starting treatment compared with the baseline condition. The secondary clinical endpoint was the change in the stool consistency score at the fourth week compared with the baseline condition. As another secondary endpoint, we investigated changes in the gut microbiome profiles using high-throughput sequencing of the V3–V4 region of the bacterial 16S ribosomal RNA gene before and after treatment. A cross-section analysis of the defecation frequency was performed with the taxonomy data.
Each physician monitored adverse events, collected data, and completed case report forms. The random allocation sequence and data analyses were performed by another researcher using unconsolidated data obtained from individuals’ personal information.

In order to detect a significant improvement in defecation, we estimated a standardized size effect of 1.1–1.2 with a 2-sided 5% significance level and a power of 90%. The sample size was calculated to be 16–19 patients per group. Therefore, we decided to include 20 patients in each group, anticipating a dropout rate of 10%.

Regarding the baseline characteristics, the age, defecation frequency, and Bristol stool form score were subjected to an F-test with a one-way analysis of variance (ANOVA). A X2 test was used for the sex ratio (Table 1). The least mean square value was estimated by the linear mixed model from the change of baseline defecation frequency and the Bristol stool form score. In the t-test used to determine the p-value, the error was estimated by the linear mixed model. The null hypothesis was subjected to a two-sided test (Table 2 and Table 3). The analyses of clinical data were performed using the SPSS 16.0 software program (SPSS Inc., Chicago, IL, USA).
The gut microbiome profiles of the bacterial 16S ribosomal RNA gene was performed using MiSeq (Illumina, San Diego, CA, USA). The distribution of alpha diversity in the stool microbiome within groups was measured by the Shannon index and an ANOVA with Holm’s post hoc test was conducted to determine statistical significance (Figure 3). The defecation frequency was cross-analyzed with the taxonomy data by Pearson’s product moment correlation to assess statistical significance (Figure 6).

Sixty-three patients were recruited to this study and randomly assigned to groups. Three were excluded (two for using antibiotics for otitis media and one that developed Kawasaki disease during study period), so a total of 60 patients enrolled. There were no marked differences between the three groups with respect to gender, age, and baseline condition (Table 1). No adverse event related to any treatment was observed in this study.
All three groups exhibited a significant increase in the number of bowel movements during the second and fourth week compared with baseline condition (group A: p < 0.05; group B: p < 0.05; group C: p < 0.05) (Table 2, Figure 1). In each group, the number of defecations had already increased 2 weeks after the start of the study, and the improvement continued up to 4 weeks. In the probiotic and MgO combination treatment group, no synergistic effect was observed compared to a single treatment group regarding defecation frequency. The MgO group and combination group showed a significant decrease in stool consistency, but the L. reuteri DSM17938 group did not (group A: p = 0.079; group B: p < 0.05; group C: p < 0.05) (Table 3, Figure 2). The combination therapy of L. reuteri and MgO exhibited a significant increase in defecation frequency and decrease in stool consistency. The decrease in stool consistency was more significant in the MgO single therapy group than in the probiotic and MgO combination group. In the end, neither the number of bowel movements or the Bristol stool form scale showed any synergistic effects.
Concomitant changes in the gut microbiome were observed. The treatment did not change the alpha distribution of the gut microbiome according to the Shannon index (Figure 3). However, treatment with MgO significantly suppressed the presence of the genus Dialister (Figure 4). Furthermore, the defecation frequency negatively correlated with the frequency of order Clostridiales-belonging bacteria among the gut microbiome (Figure 5 and Figure 6).

In our study, we noted a significant improvement in the defecation frequency with L. reuteri DSM 17938 in functional constipation. Although evidence is currently insufficient to support a general recommendation concerning the use of probiotics to treat functional childhood constipation, this therapeutic option is generally considered safe. MgO administration significantly suppressed the presence of the genus Dialister.
The pathophysiology of constipation is multifactorial and has a complex influence on a patient’s microbiome. Further studies are needed in order to obtain more robust evidence concerning the general use of probiotics in constipation and the relevance of the microbiome in constipated children.

I wish to thank Wakaba Fukushima, MD, PhD, Professor of Osaka City University Graduate School of Medicine, Department of Public Health, for her help with the sample size evaluation and data analyses of this study. 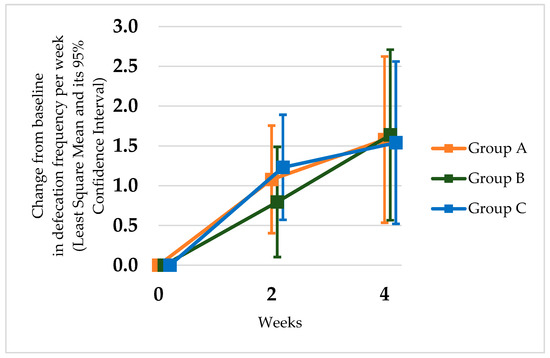 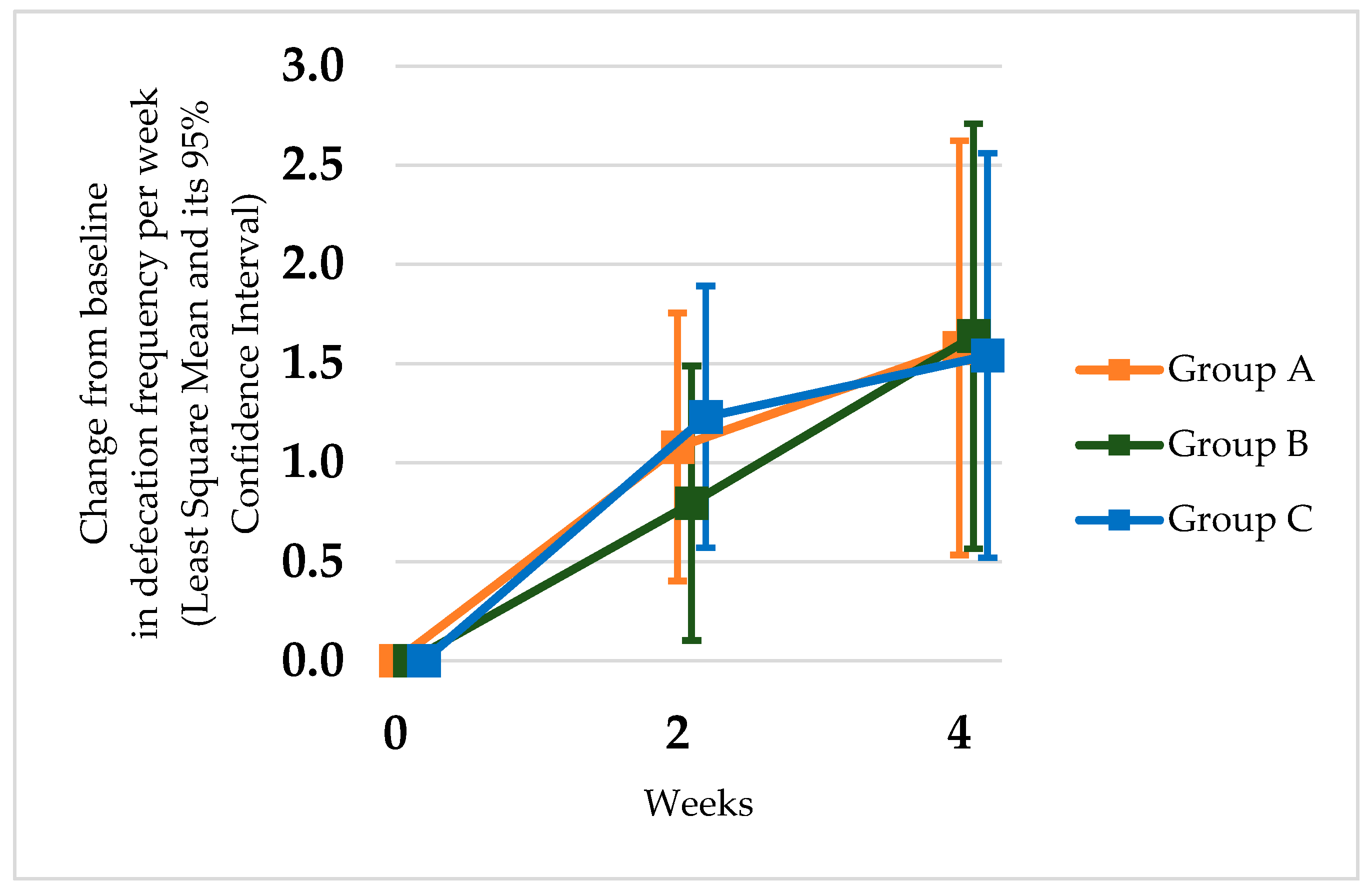