The Evolving Microbiome from Pregnancy to Early Infancy: A Comprehensive Review
Next Article in Special Issue

Probiotic is little known for its benefits on upper gastrointestinal health. The objective of this systematic review was to examine the efficacy of probiotics in alleviating the frequency and severity of symptoms in gastroesophageal reflux disease (GERD) in the general adult population. The PubMed and Web of Science databases were searched for prospective studies on GERD, heartburn, regurgitation, and dyspepsia, without any limitation on sample size. The Jadad scale was used to evaluate the quality of randomized controlled trials. In total, 13 prospective studies that were published in 12 articles were included in the analysis and scored per the Jadad scale as high- (five studies), medium- (two), and low- (six) quality. One article reported on two probiotic groups; thus, 14 comparisons were included in the selected studies, of which 11 (79%) reported positive benefits of probiotics on symptoms of GERD. Five out of 11 positive outcomes (45%) noted benefits on reflux symptoms: three noted reduced regurgitation; improvements in reflux or heartburn were seen in one study; five (45%) saw improvements in dyspepsia symptoms; and nine (81%) saw improvements in other upper gastrointestinal symptoms, such as nausea (three studies), abdominal pain (five), and gas-related symptoms (four), such as belching, gurgling, and burping. In conclusion, probiotic use can be beneficial for GERD symptoms, such as regurgitation and heartburn. However, proper placebo-controlled, randomized, and double-blinded clinical trials with a sufficient number of participants are warranted to confirm its efficacy in alleviating these symptoms. Further, interventions with longer durations and an intermediate analysis of endpoints should be considered to determine the proper therapeutic window. View Full-Text
Keywords: gastroesophageal reflux disease; regurgitation; heartburn; probiotics gastroesophageal reflux disease; regurgitation; heartburn; probiotics
►▼ Show Figures 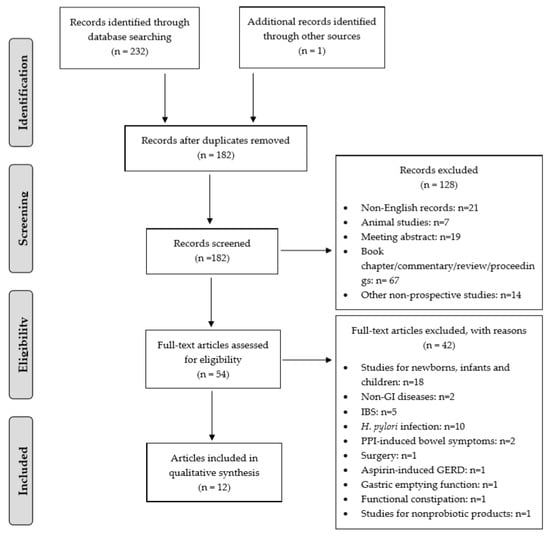