Dietary Patterns and Cardiometabolic Outcomes in Diabetes: A Summary of Systematic Reviews and Meta-Analyses
Next Article in Special Issue

The Potential Use of Metabolic Cofactors in Treatment of NAFLD

Anorexia nervosa (AN) is a psychiatric disorder affected by psychological, environmental, and biological factors. Individuals with AN avoid high-fat, high-calorie diets and have shown abnormal metabolism of fatty acids (FAs), which are essential for brain and cognitive/neuropsychiatric health. To clarify the relationship between FAs and AN, fasting and postprandial plasma FAs in AN patients and age-matched control women were analyzed via mass-spectrometry. Clinical phenotypes were assessed using Becker Anxiety Inventory and Becker Depression Inventory. AN patients and controls exhibited different FA signatures at both fasting and postprandial timepoints. Lauric acid, eicosapentaenoic acid (EPA), docosapentaenoic acid (DPA), and alpha-linoleic acid (ALA) were higher in AN than in controls (lauric acid: 15,081.6 ± 14,970.2 vs. 8257.4 ± 4740.2 pmol/mL; ALA at fasting: 2217.7 ± 1587.6 vs. 1087.9 ± 821.2 pmol/mL; ALA at postprandial: 1830.9 ± 1115.6 vs. 1159.4 ± 664.7 pmol/mL. EPA: 33,788.3 ± 17,487.5 vs. 22,860.6 ± 12,642.4 pmol/mL; DPA: 32,664.8 ± 16,215.0 vs. 20,969.0 ± 12,350.0 pmol/mL. FDR-adjusted p-values < 0.05). Food intake and AN status modified the correlations of FAs with body mass index (BMI), depression, and anxiety. Desaturases SCD-18 and D6D showed lower activities in AN compared to controls. Altered FA signature, specifically correlations between elevated n-3 FAs and worsened symptoms, illustrate metabolic underpinnings in AN. Future studies should investigate the mechanisms by which FA dysregulation, specifically elevated n-3 FAs, affects AN risk and outcome.
Keywords: fatty acids; anorexia nervosa; metabolic dysregulation fatty acids; anorexia nervosa; metabolic dysregulation

Anorexia nervosa (AN) is an eating disorder characterized by distorted perceptions of the body image and extreme self-restraints on dietary intake to lose weight [1]. AN affects 0.3%–4% of women [2,3,4]. It is one of the deadliest psychiatric disorders with estimated mortality rates ranging between 4.4% and 18% [4,5]. Interactions between environmental, psychological, and biological factors have been proposed to affect the pathogenesis and treatment resistance characteristics in AN [2,6,7]. However, the biological etiology of AN remains elusive. Limited understanding of the AN pathophysiology has hindered the development of effective treatments and prevention strategies, as indicated by a high relapse rate of 11%–36% [8,9,10,11] and the persistence of eating disorder symptoms even after AN patients have restored their ideal weight after treatments [12]. Thus, expanded knowledge of the biological underpinnings of AN is required to enhance treatment effectiveness and reduce relapse.
AN is characterized by distorted perceptions of the body and extreme self-restraints on dietary intake to lose weight [1]. Compared to healthy controls, women with AN display a strong aversion toward foods high in calories and fats [13,14] and prefer consuming diets containing low amounts of fats [15]. Reduced fat intake among AN patients, as a result of avoiding fat-rich foods, is concerning because lower amount of total lipids in the diet correlates with longer duration of the disorder [15]. AN patients with poor treatment outcomes have shown to consume less fat compared to AN patients with successful treatment outcomes [16], suggesting that fat restriction may be connected to metabolic changes that accelerate the pathogenesis of AN. Consistent with this concept, abnormal absorption and metabolism of lipids have been postulated to contribute to homeostatic disruptions that underlie AN pathophysiology [17]. Since fat aversion may impede treatment success and worsen AN prognosis, it is imperative to elucidate the biological changes related to the fat avoidance behavior to shed light on the etiology of AN and improve treatment outcomes.
AN patients avoid a broad range of high-fat foods, encompassing major sources of saturated and unsaturated fatty acids (FAs). While saturated FAs do not contain any double bond, unsaturated FAs contain one or more double bonds [18], which are termed monounsaturated and polyunsaturated FAs, respectively [19]. Unsaturated FAs can be classified into n-3, n-6, n-7, and n-9 FAs, which can be found in a variety of food staples including fish oil (n-3), soybean oil (n-6), butter (n-7), and olive oil (n-9) [20,21,22,23]. These FAs, especially the well-studied n-3 FAs, are important for brain development, and aberrations in n-3 FA levels have been implicated in various cognitive and neuropsychiatric disorders such as Alzheimer’s disease, autism, schizophrenia, anxiety, and depression [24,25,26]. Altered concentrations of FAs have been found in the blood samples of patients with AN in multiple studies. For instance, two studies, including our previous publication, reported significant increases in n-3 FAs in AN patients compared to controls [27,28]. However, two other studies found a decrease of long chain n-3 polyunsaturated FAs in AN and eating disorder patients [29,30]. A study found a significant decrease in the saturated stearic acid [31], whereas another study documented elevated saturated FAs in AN patients compared to healthy controls [28]. Abnormal patterns of FAs in AN, coupling to the documented importance of FAs in the development of a healthy and functional brain, suggest that lipid dysregulation is involved in the pathogenesis of AN.
It is currently unknown if metabolic FA aberrations affect the pathophysiology of AN and if they could potentially serve as useful biomarkers for AN, as well as for assessing the outcome of treatment. Our study aims to replicate the previously found association [27] between plasma FAs and AN. Furthermore, we implemented a food-challenge study designed to assess if FA dysregulation is implicated in the fatty-food avoidance behavior frequently seen in AN. Lastly, to determine if FA metabolism is altered in AN, we compared the activity markers of enzymes regulating FA desaturation and elongation. We hypothesized that AN patients will show abnormal patterns of plasma FAs and altered enzyme activities demonstrating the presence of metabolic lipid dysregulation in both fasting and fed states, and that these dysregulation associate with clinical phenotypes. Answers to these questions will help the eating disorder field to better elucidate the biological underpinnings of AN, enable identification of novel biomarkers, and allow for more accurate prediction of treatment response as well as more effective prevention and intervention programs for AN.

Participants were recruited from the University of Toronto and the University of California, San Diego (UCSD). A total of 50 women with AN (30 Ill AN (age 29.6 ± 9.0) and 20 Recovered AN (age 31.1 ± 12.0)) and 47 healthy control women (age 30.5 ± 9.3) enrolled in the study. At the fasting timepoint, blood samples and research questionnaires were collected from all participants. At the postprandial timepoint, blood samples and questionnaires were obtained from 28 women with AN (9 ill and 19 recovered AN) and 46 healthy control women. Prospective subjects who are interested in the study contacted recruitment site investigators and underwent a phone interview that assessed eligibility and received information about the study. Subjects with AN had to have a formal diagnosis with AN by a licensed psychiatrist. Exclusion criteria for all prospective participants included having an Axis I psychiatric illness, organic brain syndrome, schizophrenia or schizoaffective disorder, untreated thyroid disease, renal disease, hepatic disease, being pregnant or breast feeding, or using fish oil supplements on a regular basis. Subjects who reported regular use of fish oil supplements and were willing to discontinue fish oil supplementation for 30 days prior to the study visit remained eligible for the study if all other eligibility criteria have been met. Other supplements and/or medications were not included in the exclusion criteria. All study subjects fasted for a minimum of 10 h before their scheduled study visit time. Upon arriving at the clinic, study participants completed the consent form and questionnaires and donated blood, and all participants ate a breakfast sandwich as the study challenge meal that consists of sausage, egg, cheese, and English muffin (Calories: 436; fat: 27 g (saturated fat = 11 g); carbohydrates: 28 g; protein: 19 g). All participants finished the meal within 25 min. Two hours after eating, all subjects donated another blood sample and completed postprandial questionnaires. Although there were similar numbers of individuals with AN (n = 50) and healthy controls (n = 47) at the fasting timepoint, 22 subjects in the AN group and 1 subject in the control group had refused the challenge meal due to reasons including “too sick to eat” (n = 13, all AN) and refusal to eat any meat or pork product (n = 9). This study has been approved both by the UCSD Human Protection Board and the University of Toronto Research Ethics Board.

The plasma FA concentrations were measured by gas chromatography-mass spectrometry (GC-MS) at the UCSD Lipidomics Core as previously reported [27,32,33]. Briefly, to analyze the total (sum total of esterified and non-esterified) plasma FA composition, human plasma (10 μL) in methanol (250 μL) was supplemented with a cocktail of internal standards consisting of 15 deuterated FAs, saponified with 0.5 N KOH for 30 min at 37 °C and then adjusted to pH = 4 with glycine buffer. The FAs were extracted with isooctane and derivatized with pentafluorobenzyl (PFB) bromide. The resulting fatty acid PFB esters were analyzed by GC-MS using a negative chemical ionization mode (Agilent 6890N gas chromatograph equipped with an Agilent 5973 mass selective detector; Agilent, Santa Clara, CA, USA). All reagents and solvents were of highest purity, suitable for mass spectral analyses and were purchased from ThermoFisher Scientific (Waltham, MA, USA). All fatty acid standards (purity > 99%) used for identification and quantification were purchased from Nu-Chek Prep Inc. (Elysian, MN, USA). All deuterated fatty acids that were used as internal standards were purchased from Cayman Chemical (Ann Arbor, MN, USA). Standard curves for each of the FAs were acquired in parallel using identical conditions. The quantitative assessment of FAs in a sample was achieved by comparison of the mass spectrometric ion signal of the target molecule normalized to the internal standard with the matching standard curve according to the isotope dilution method. The concentrations of the FAs are reported in pmol/mL.

Phenotype data (age, body mass index (BMI), Becker depression inventory (BDI), and Becker anxiety inventory (BAI)) were tested for normality using histograms and Shapiro-Wilk test of normality in R 3.5.2. Wilcoxon rank sum was used to compare study subject characteristics and psychiatric phenotypes between control group and each of the AN groups (ill AN (IAN), recovered AN (RecAN), all AN combined (all AN)) (Table 1). We evaluated 26 FAs in the n-3, n-6, n-7, n-9, and saturated FA classes in all available participants at fasting and postprandial timepoints. The pairwise similarity was determined using the Pearson correlation between absolute FA concentrations and plotted using seaborn clustermap in Python with row or column clustering set to False. Python was used to run t-tests with false discovery rate (FDR) adjustment to compare plasma concentrations of 26 FAs in AN versus controls at both fasting and postprandial timepoints. Spearman’s rho was used to determine correlations between individual FAs and phenotypes (BMI, BDI, BAI, and postprandial change in BAI). FA product/substrate ratios were generated as proxy markers of FA regulatory enzyme activities. T-test was used to compare FA product/substrate ratios as well as n-6:n-3 ratios between AN and controls.

We wish to thank all our study participants for their participation, and all members of our research team, led by Eileen Lam, for their dedication and professionalism. 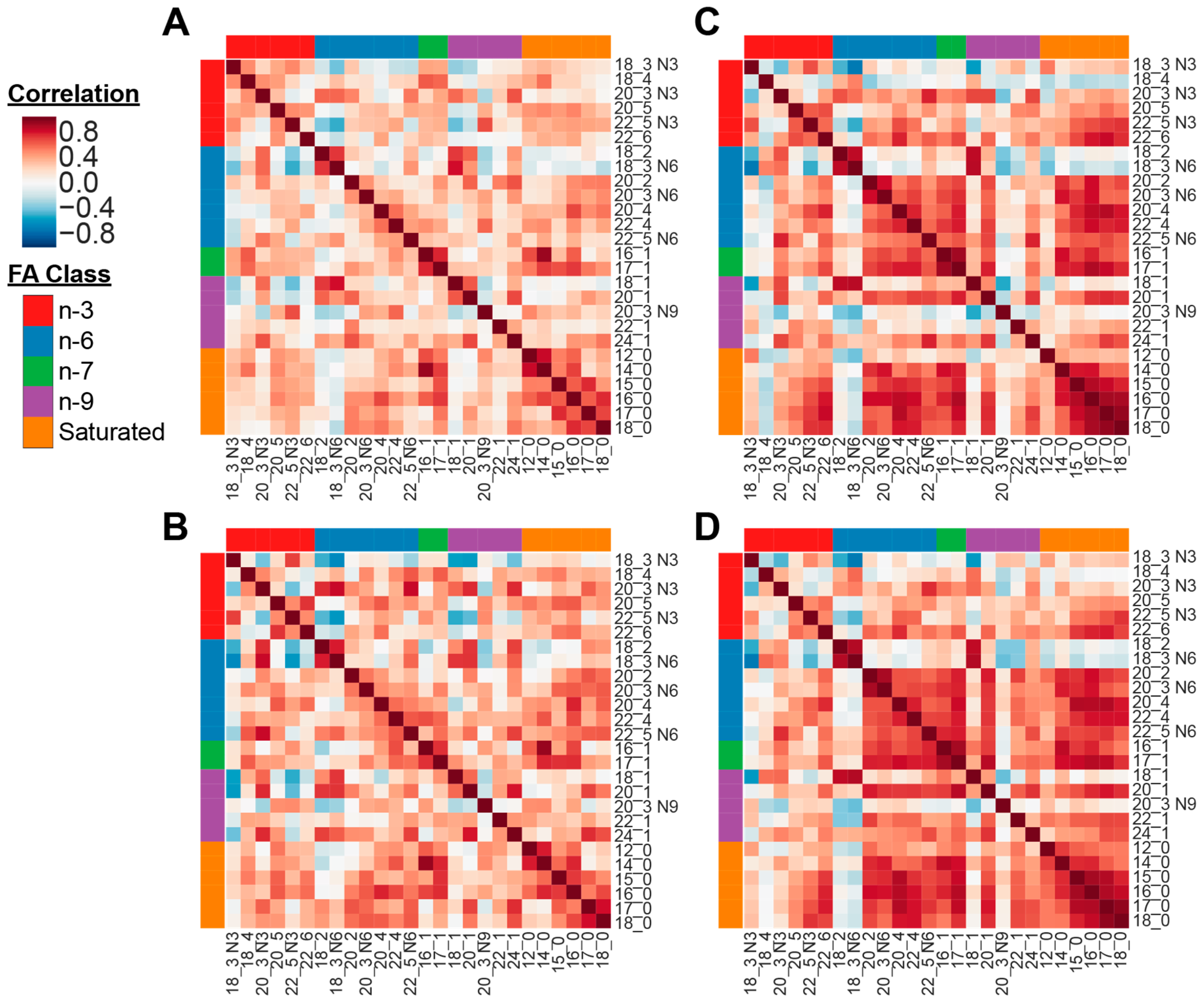