Prevalence of Overweight and Obesity among European Preschool Children: A Systematic Review and Meta-Regression by Food Group Consumption

The aim of this review was to estimate the prevalence of overweight and obesity among European children aged 2–7 years from 2006 to 2016 and to analyze these estimations by gender, country, and food group consumption. We searched CINAHL, EMBASE, MEDLINE, and Web of Science databases from their inception until 27 February 2019 including cross-sectional studies and baseline measurements of cohort studies with overweight and obesity defined according to the International Obesity Task Force criteria. Both the inverse-variance fixed-effects method and the DerSimonian and Laird random effects method were used to determinate pooled prevalence estimates and their respective 95% confidence intervals (CIs). A total of 32 studies (n = 197,755 children) with data from 27 European countries were included. Overall, the pooled prevalence estimates of overweight/obesity in European children (aged 2–7 years) during the period 2006–2016 was 17.9% (95% CI: 15.8–20.0), and the pooled prevalence estimate of obesity was 5.3% (95% CI: 4.5–6.1). Southern European countries showed the highest prevalence of excess weight. Additional measures to address the obesity epidemic in early life should be established, especially in European countries where the prevalence of excess weight is very high. View Full-Text
Keywords: excess weight; overweight; obesity; pre-school-aged children; Europe; prevalence; food; systematic review excess weight; overweight; obesity; pre-school-aged children; Europe; prevalence; food; systematic review
►▼ Show Figures 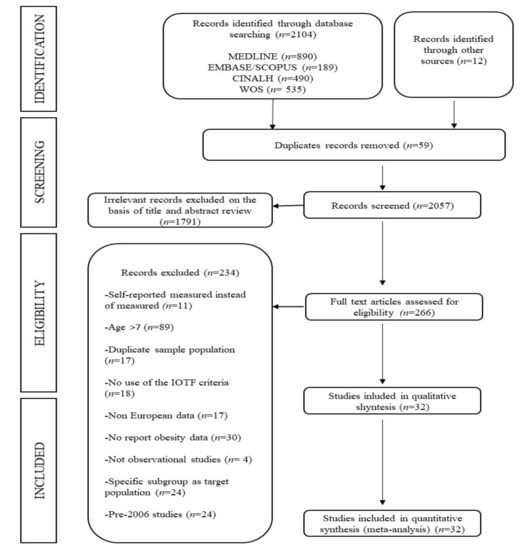