Effect of Three Diets (Low-FODMAP, Gluten-free and Balanced) on Irritable Bowel Syndrome Symptoms and Health-Related Quality of Life
Next Article in Special Issue

Cereal B-Glucans: The Impact of Processing and How It Affects Physiological Responses
Previous Article in Journal

Mango (Mangifera indica L.) is a tropical fruit which is considered to be a source of dietary fiber (DF) and phenolic compounds (PCs). In this study, high DF mango-based fruit bars were developed from whole mango (peel and pulp). The bars were evaluated for their nutritional composition, the bioaccesibility of PCs during gastrointestinal digestion, and the PCs metabolites profile after in vitro colonic fermentation. The amount of DF in a 30 g portion of mango bars was 9.5 g, i.e., 35% of the recommended daily intake. Phenolic acids such as gallic acid; cinnamic acids, such as ferulic, coumaric, and caffeic acids; flavonoids such as quercertin; and xanthones such as mangiferin and mangiferin gallate, were identified as the main PCs in the bars. The antioxidant capacity associated with the PCs profile, together with the high DF content are indicative of the potential functional features of these natural fruit bars. The bioaccesibility of PCs in the mango bar was 53.78%. During fermentation, the PCs were bioconverted mainly to hydroxyphenolic acids and the main short-chain fatty acid produced was acetic acid. The xanthone norathyriol was identified after 12 h of fermentation. This study on the digestion and colonic fermentation of mango-based bars using in vitro models provides hints of the potential physiological behavior of PCs associated with DF, which constitutes relevant information for further development of natural and health-promoting fruit-based bars. View Full-Text
Keywords: mango; fruit-based bars; in vitro digestion; bioaccessibility; phenolic compounds; antioxidant capacity mango; fruit-based bars; in vitro digestion; bioaccessibility; phenolic compounds; antioxidant capacity
►▼ Show Figures 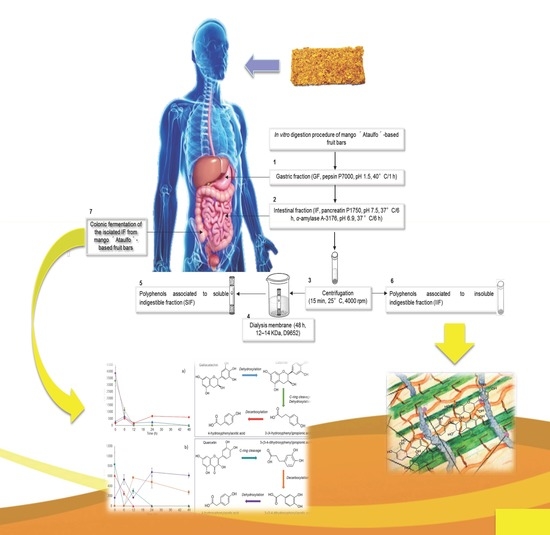