Seminal but not Serum Levels of Holotranscobalamin are Altered in Morbid Obesity and Correlate with Semen Quality: A Pilot Single Centre Study
Previous Article in Special Issue

Adaptation and Validation of Alternative Healthy Eating Index in Hemodialysis Patients (AHEI-HD) and Its Association with all-Cause Mortality: A Multi-Center Follow-Up Study

Vitamin K (vit K), a fat-soluble vitamin, exists in some forms: vit K1 (phylloquinone), which is mainly found in green leafy vegetables, and vit K2 (menaquinone-n: MK-n), which is mainly found in fermented dairy and produced by lactic acid bacteria in the intestine [1,2]. In addition, vit K3 (menadione) is a synthetic vit K, which is metabolized in the animal to vit K2. Vit K3 is added to animal feed as a vit K source. Vit K2 is classified by the number of isoprene units in the side chain. MK-4 is relatively abundant in chicken meat and egg. Natto, which is a Japanese fermented soybean-based product, is rich in MK-7, also contains MK-8. Several types of cheese contain MK-8 and MK-9 [3]. The vit K2 synthesized by intestinal bacteria are mainly MK-10 and MK-11, but small amounts of MK-7, MK-8, MK-9 and MK-12 are also synthesized [4]. In particular, vit K2 plays an important role in regulating the activity of matrix Gla protein and osteocalcin after being transported to extrahepatic tissues. In addition, there are Vit K-dependent proteins that are carboxylated by vit K in places like periosteum and periodontal membrane (periostin), brain and vascular endothelial tissues (growth arrest specific-6), liver (transthyretin), cornea (β-Ig-H3), biomembrane (PRGP-1, 2; TMGP-3, 4) and so on. Vit K promotes blood coagulation [5,6], bone fracture healing, and osteogenesis [7,8]. Also, vit K is reported to be related to various organs and diseases such as the chronic kidney disease, some types of cancer, liver disease, immunity functions, neurological disorders, obesity and so on. Vit K1 is preferentially retained in the liver to aid the carboxylation of coagulation factors [9]. In contrast, vit K2 is redistributed into the circulation and is used for extrahepatic tissues such as bones and the vascular system [9]. The mechanism of clinical outcomes can be complicated because the work of vit K varies widely. Several reports have indicated a possible link between decreasing plasma levels of vit K and bone mineral density [10]. Supplementation of phylloquinone had modestly increased the bone mass of the total radius [11]. It has been reported that increased dietary intake of vit K may reduce the risk of fractures [12]. On the other hand, the association between vit K and the risk of fractures is still debatable because there were few well-designed prospective cohort studies and clinical trials. Many broad-spectrum antibiotics decrease the number of intestinal bacteria, limit vit K production, and cause coagulopathies [13,14,15]. Vit K is known to be deficient in newborn babies whose intestinal bacteria are not well established, and asymptomatic mice raised with food lacking vit K have an increased mortality rate with deterioration of hemostatic function [16,17]. The germ-free mice exhibited increased bone mass, and a normalization of bone mass after a gut microbiota transplantation [18]. Based on these results, it has been suggested that intestinal bacteria contribute to maintenance of vit K.
Vit K gets absorbed by the enterocytes of the small intestine and is dependent on bile, pancreatic enzymes and the dietary fat content. Vit K2 in human intestines is related to the composition of the gut microbiota but is reported to be highly variable [19]. Also, while vit K is absorbed in the small intestine through a mechanism that requires bile acid salts, most is produced in the colon where there are no bile acid salts. The percentage of vit K synthesized by intestinal bacterial is much lower than excepted previously, although the exact proportion of vit K production/absorption in colon and small intestine remain unclear [20]. However, due to the difference of bioavailability, bioactivity and several unique functions of vit K2 [3,21], it is considered that even small amounts of vit K2 derived from intestinal bacteria can have a significant impact on health. Vit K deficiency is rare in healthy individuals [22], but has been found to be more common in patients with inflammatory bowel disease (IBD) [10,23,24]. It has been considered that malabsorption disorders due to small intestine lesions and/or resections [10,23,25], fat restriction, and the use of glucocorticoids [26,27] could lead to vit K deficiency in patients with Crohn’s disease (CD).
It is well-known that the gut microbiota of patients with CD differs in proportion and composition to that of patients without CD [28]. Furthermore, recent reports have suggested that there may be an association between gut microbiota and osteoporosis [29]. However, there have been no studies on the association between gut microbiota and vit K in patients with CD.
There are many reports indicating that the bones are more sensitive to vit K deficiency than the liver [10,30]. Although vit K γ-carboxylates osteocalcin, in the cases of vit K deficiency, undercarboxylated osteocalcin (uc-OC) is released into the blood [31]. There are two main substrates in vit K dependent carboxylation that are used to assess vit K status. These two substrates are uc-OC and protein induced by vit K absence-II (PIVKA-II), because direct measurement of vit K is not easy in routine practice. Increasing serum levels of uc-OC and PIVKA-II reflect vit K deficiency in the bone and liver, respectively. The increase of serum uc-OC indicates vit K deficiency. Dietary vit K intake for healthy women affects serum levels of uc-OC [32]. The serum levels of uc-OC negatively correlated with the vit K intake in anorexia nervosa patients showing bone loss [33]. Elevated serum level of uc-OC indicates the increased risks of hip fractures in elderly women [34,35]. It was reported that the serum levels of uc-OC were more strongly related to ultrasound transmission speed than to femoral neck density [36]. An observational study on adult patients with CD, demonstrated that the serum levels of uc-OC positively correlated with bone turnover speed [37] and to negative correlate with BMD in the lumbar spine [23].
The aim of this study was to assess the relationship between the gut microbiota and alternative indicators of vit K deficiency in patients with CD.

This study was approved by the institutional review board of Kyoto University (E2315, December 24, 2014). Informed consent was obtained from all individual participants included in the study before enrolling. All procedures performed in studies involving human participants were in accordance with the ethical standards of the institutional and/or national research committee and with the 1964 Helsinki declaration and its later amendments or comparable ethical standards.

Eligibility criteria were outpatients with CD treated at Kyoto University Hospital, who agreed to participate in this study between August and December 2015. CD was diagnosed based on clinical diagnostic criteria by symptoms, radiological findings, endoscopic findings, and histological findings. Exclusion criteria were (1) patients with clinically active disease; (2) patients that were pregnant or are likely to be pregnant; (3) patients who did not agree with the epidemiological study; and (4) other cases deemed inappropriate by the attending physician or the conducting physician. There were 26 patients with CD from whom we obtained consent and from whom we were able to collect feces samples.

The collected amount of feces was 5–10 g and the feces were stored at −80 °C until measurement. The feces were immediately discarded after measurement. DNA was extracted from the collected feces using a glass bead extraction method and purified according to a previously reported method [38]. The V3–V4 region of the 16S rRNA gene was amplified via polymerase chain reaction (PCR) using barcoded primers, and PCR products were sequenced using the paired-end technique (Illumina MiSeq platform), as previously described [39]. By using the quantitative insights into microbial ecology (QIIME 1.8.0) [40], 966,729 high-quality reads were generated and assigned to operational taxonomic units (OTUs). A representative sequence for each OTU was aligned with Python Nearest Alignment Space Termination [41], and taxonomically classified by using UCLUST [42].

In our study, the serum uc-OC concentration was used as an alternative indicator. Regarding the cut off value for serum level of uc-OC, the cut-off value for serum level of uc-OC in osteoporosis is set at 4.5 ng/mL at many institutions in Japan based on the previous data in Japan [43]. The patients were divided into two groups based on the cutoff level of the uc-OC concentration, and the gut microbiota were compared.

Normally distributed continuous variables were analyzed using the Student’s t-test and nonparametric data were analyzed using the Mann–Whitney U test. Categorical variables were analyzed using Pearson’s chi-squared test or Fisher’s exact test if any cell number was less than five. Two-sided p levels less than 0.05 were considered statistically significant. All analyses were performed using SPSS software (IBM corp. Armonk, NY, USA).
To analyze diversity of gut microbiota, the alpha diversity and beta diversity were calculated. Alpha diversity at the OTU level (Chao1 index) was calculated in QIIME [44]. Unweighted UniFrac distance was applied for principal coordinates analysis (PCoA) at the OTU level to analyze beta diversity [45], and each group was compared with PERMANOVA. The enriched bacteria in each group were identified by linear discriminant analysis (LDA) effect size (LEfSe) [46]; LDA values >2 were considered significant. Abundant taxa were highlighted on the phylogenetic tree using the GraPhlAn software.

This study was supported by the Ministry of Health, Labour and Welfare of Japan (Investigation and Research for intractable Inflammatory Bowel Disease) (N.H.) and Japan Society for the Promotion of Science (JSPS) Grants-in-Aid for Scientific Research (KAKENHI) Grant Number 18H02799 (N.H.). The funding sources for the study had no role in the study design, data collection, data analysis, data interpretation, or writing of the report.

We thank editage (https://www.editage.jp/) for editing a draft of this manuscript. 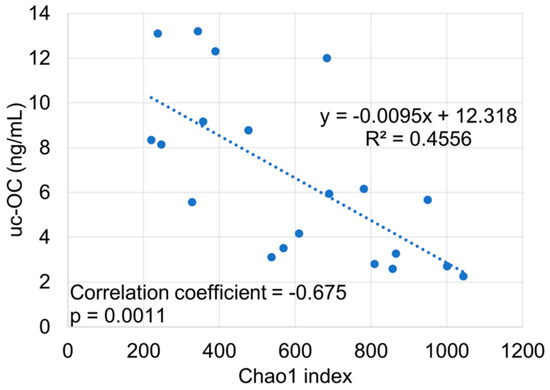 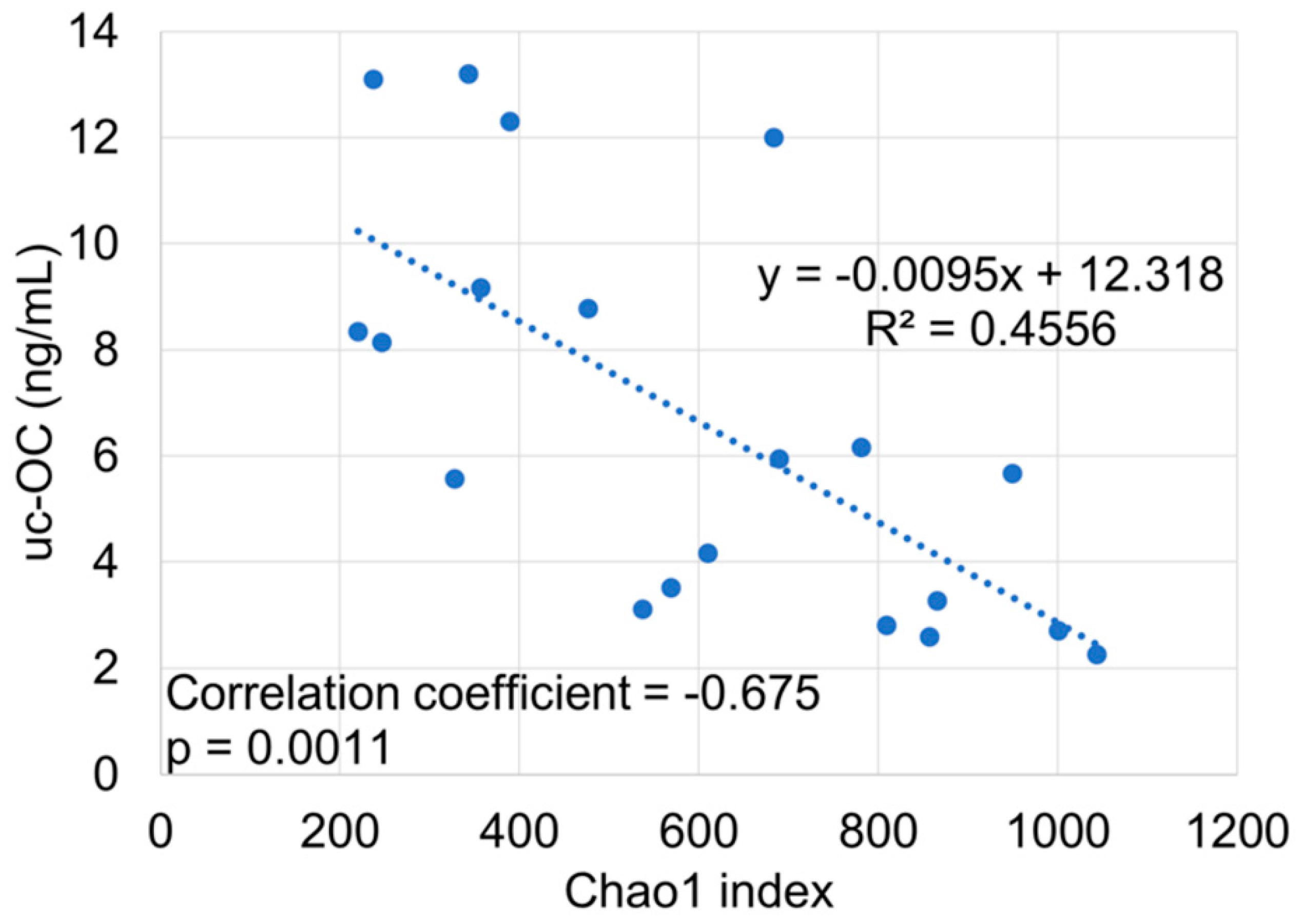 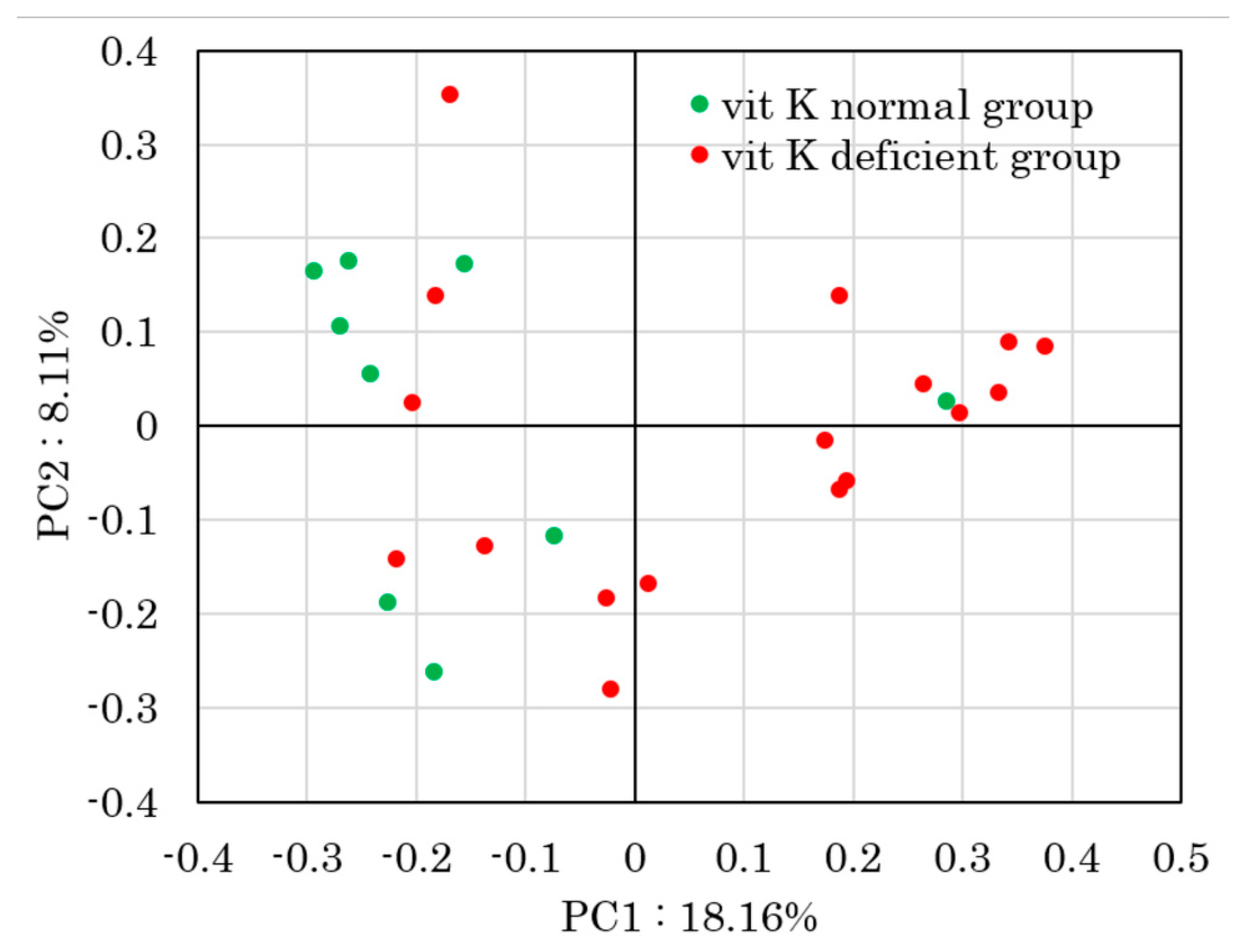 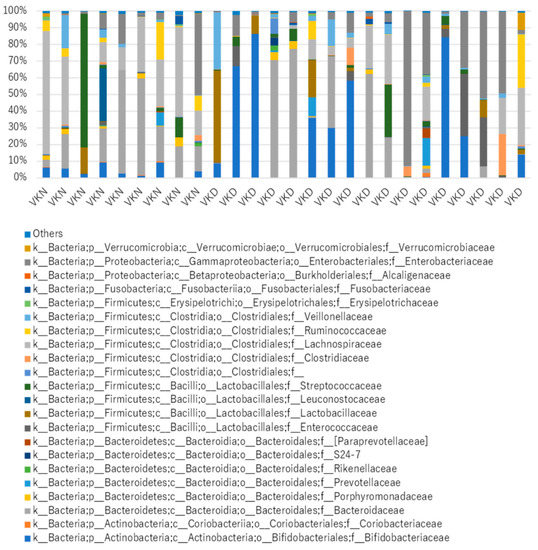 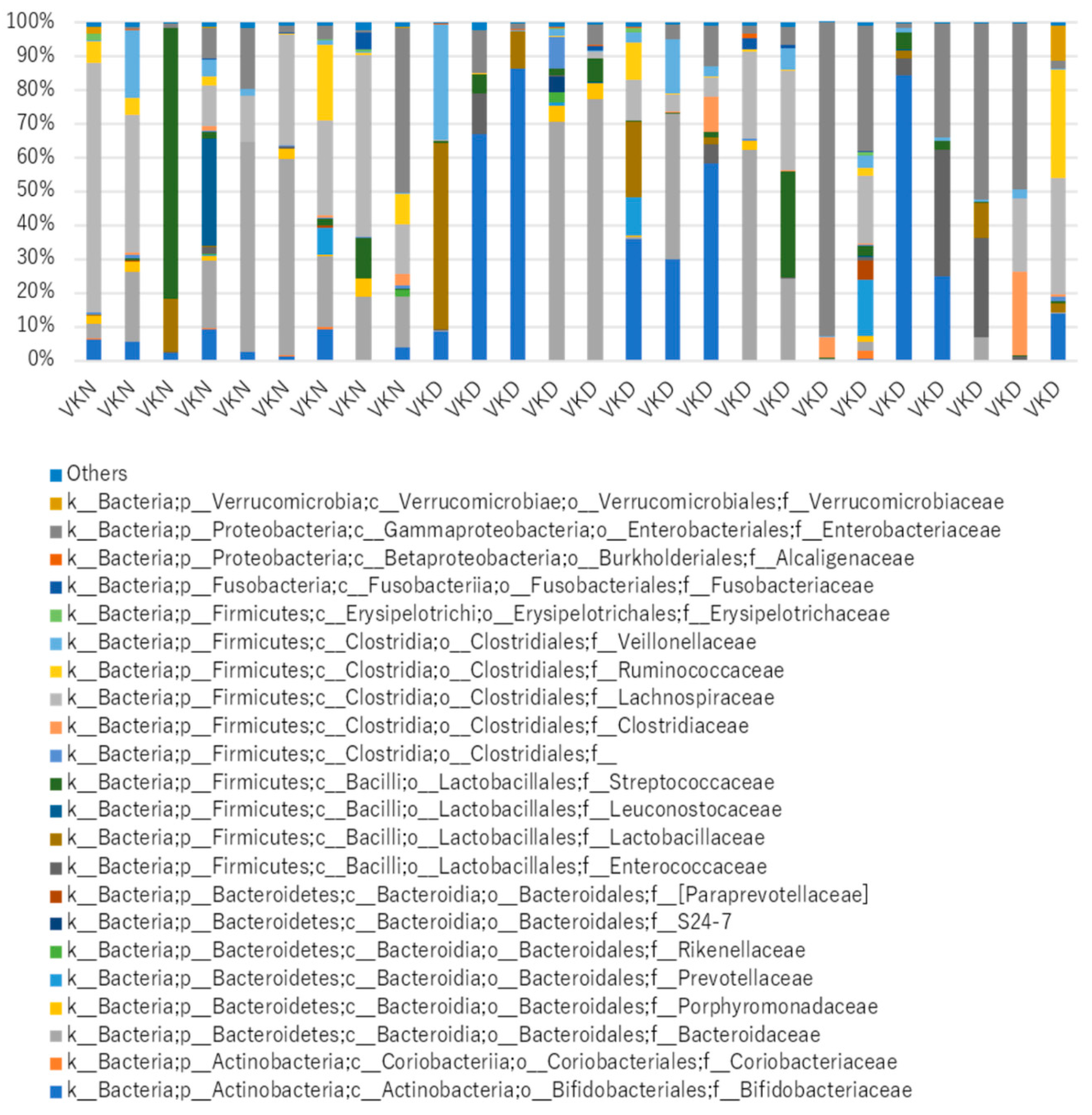 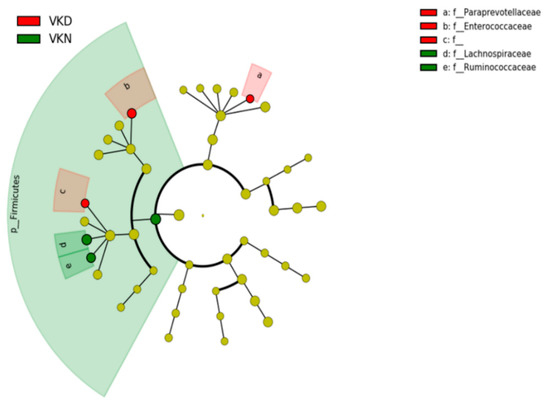 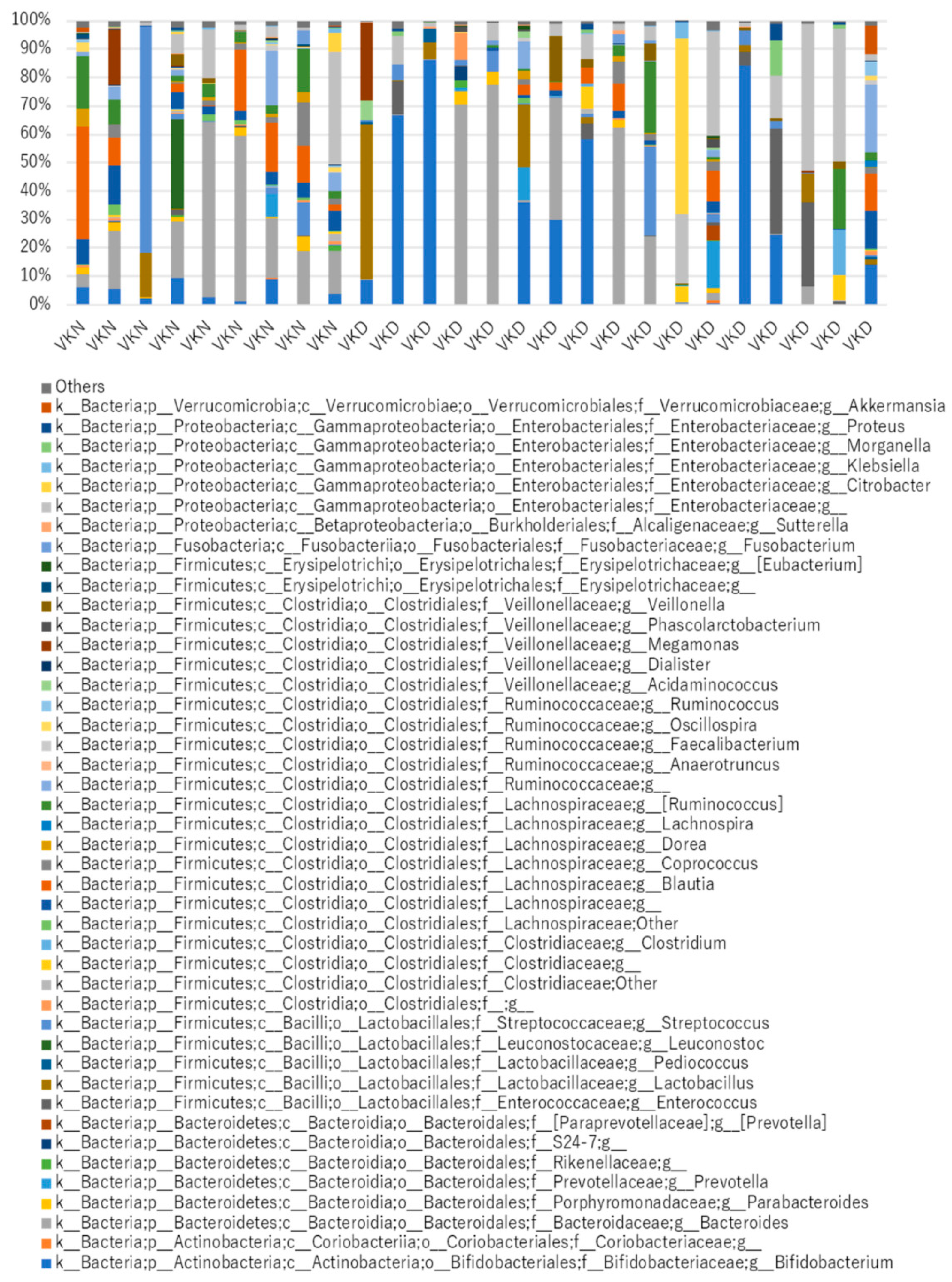 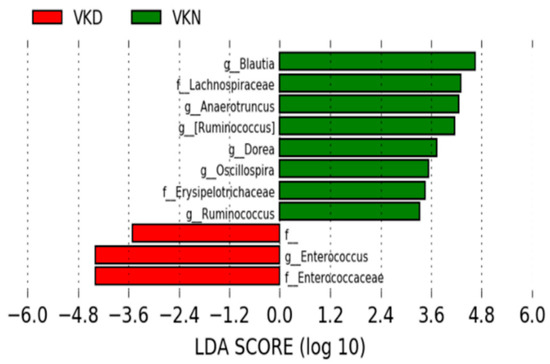 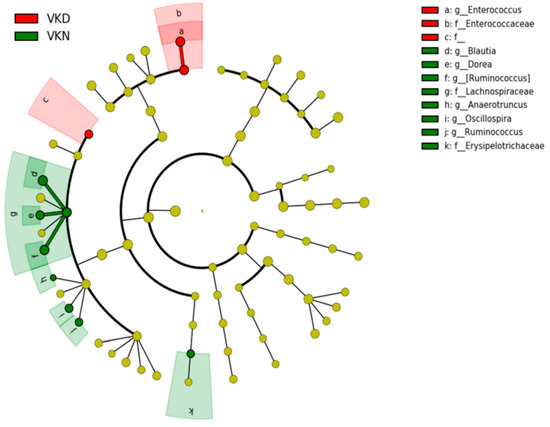 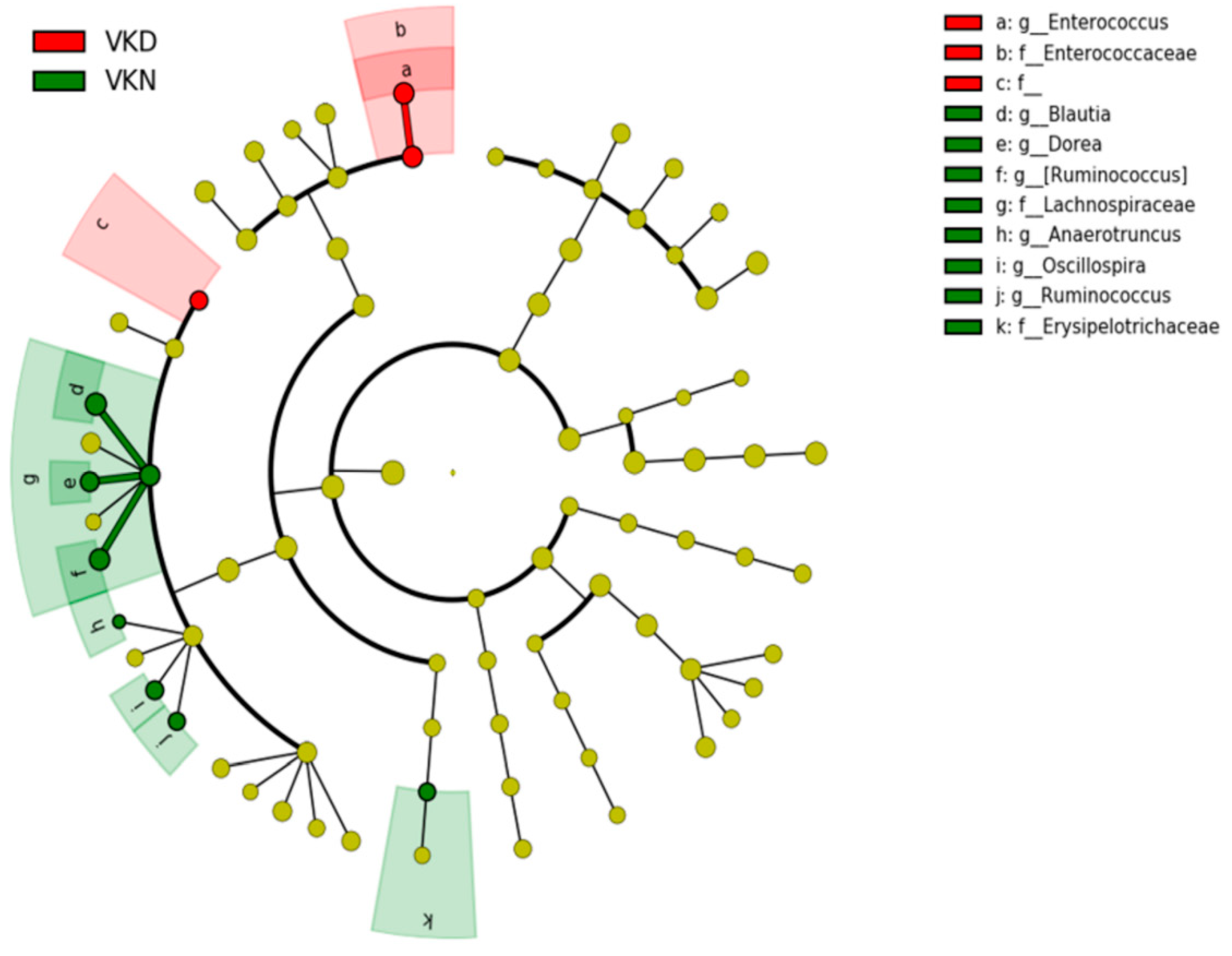