Used universally for flavoring and in traditional medicines and functional foods to enhance physical and mental health, garlic (Allium sativum) is among the most popular condiments worldwide [1]. Garlic contains organosulfur compounds (OSCs), which largely account for its protective effects [2]. It has been suggested that garlic can prevent cardiovascular disease, cancer, and diseases associated with aging by in vitro and in vivo studies [3]. In population-based studies, a number of beneficial effects have long been documented for garlic or its bioactive ingredients, especially the prevention of cancer and cardiovascular disease [4,5]. Case–control studies also documented the protective effects of garlic consumption in gastric, colorectal, prostate, head and neck, and lung cancers in different populations [4,6,7,8]. Evidence from randomized controlled trials indicated that garlic is beneficial in treating hypertension [9]. However, the association between garlic supplement intake with gastric, colorectal, breast, or lung cancers in prospective cohort studies has not been found [10]. Systematic reviews of randomized controlled trials have concluded that the inverse relationship between garlic supplementation and cardiovascular system disorders was only observed in special populations [11]. There is also insufficient evidence to determine the difference in the reduction of cardiovascular morbidity risk and mortality risk between patients treated with garlic supplements or placebo [12].
Reactive oxygen species (ROSs) accumulate in the aging process. The free radical theory has been proposed to explain the phenomenon of aging. Garlic (especially its OSCs) is known to exhibit antioxidant properties and is the most commonly used herbal supplement among community-dwelling elderly [13]. However, there is a lack of epidemiologic evidence on the protective effects of garlic against morbidity or mortality in the elderly. In China, garlic is consumed mainly in its raw form, and its consumption is much higher than elsewhere in the world [4,14]. Better biologic properties have been suggested for raw garlic than for cooked (processed or heated) garlic: heat seems to react with certain substances in garlic and change their chemical composition [15]. As the largest exporter and producer of garlic [16], the Chinese population would appear to be well suited for studying the association of garlic intake with mortality.
Uncertainties about the association between intake of either garlic or garlic supplements and health outcomes could be the result of confounding factors (e.g., tobacco smoking, alcohol drinking, tea drinking, or other dietary habits) or methodological issues (e.g., insufficient sample sizes). Therefore, to evaluate the association of dietary garlic consumption with all-cause mortality, we assessed information from 27,437 oldest-old individuals (≥80 years), adjusting for potential confounding factors, including demographic status, socioeconomic status, dietary habits, health practices, comorbidity, cognition status, and activities of daily living (ADL).

The Chinese Longitudinal Healthy Longevity Study (CLHLS) was conducted in 23 Chinese provinces using multi-stage stratified sampling. The study has one of the world’s largest samples specifically focusing on oldest-old individuals; the population in the survey areas constitutes about 85% of the total population in China. Participants were enrolled in 1998, 2000, 2002, 2005, 2008–09 and 2011–12; they have been followed up ever since in this dynamic cohort. A detailed description of the CLHLS appears elsewhere [17,18,19]. All procedures performed in studies were approved by the biomedical ethics committee of Peking University (IRB00001052-13074). Written informed consents were obtained from all participants included in the study, either themselves or their proxy respondents.
Briefly, 43,487 participants had valid baseline data, i.e., they completed the questionnaire and physical examination measurements. To meet the inclusion criteria, we excluded 9131 participants aged 79 years or younger, 5019 participants lost to follow-up at the first follow-up survey, and 1900 participants with missing garlic consumption information. Thus, the final analyses covered 27,437 participants: 9496 octogenarians, 9475 nonagenarians, and 8466 centenarians (In Supplementary material, Figure S1). Various characteristics, i.e., garlic consumption, age, sex, and diseases and functional status, were compared between participants lost-to-follow-up or not at the first follow-up survey. A significant but relatively petty difference was found for garlic consumption (17.5% vs. 15.0% often consumed garlic; 35.3% vs. 35.1% occasionally consumed garlic; 47.1% vs. 49.9% rarely consumed garlic; p < 0.001), age (94.1 vs. 92.7 years; p < 0.001), hypertension (54.8% vs. 52.9%; p = 0.013), and cognitive impairment (34.0% vs. 37.1%; p < 0.001) between the two groups, while no significant difference was found for sex (37.7% vs. 39.0% men; p = 0.080) and respiratory disease (11.2% vs. 11.9%; p = 0.154).

In the baseline survey, garlic consumption habits were determined using a brief food frequency questionnaire that has been shown to be effective in assessing the risk of functional performance and mortality [18,20,21]. Participants were asked two questions: “How often do you currently consume garlic?” and “How often did you consume garlic when aged 60 years?”. As all participants enrolled in this study were older than 60, the frequency of garlic consumption was collected through retrospective investigation. The questions were in the form of a qualitative food frequency questionnaire. Three response categories were chosen: often (daily or almost daily, ≥5 times/week), occasionally (1–4 times/week), and rarely (less than once/week) [18]. It should be noted that only the frequency of garlic consumption was determined, and no quantitative assessment was made. In the present study, we used baseline garlic consumption as primary exposure. We also explored the association between garlic consumption at age 60 years and mortality in a secondary analysis. To test the potential influence of recall bias, the correlation between garlic consumption at baseline and at age 60 years was analyzed and verified with good consistency (Pearson correlation coefficient = 0.79), which also indicates that the habit of garlic consumption was relative stable among Chinese elderly aged 60 and older.

Information about death was obtained from participants’ close family members or local residential committees in the follow-up survey [18]. Person-years were calculated from baseline to the date of loss to follow-up, death, or September 1, 2014, whichever occurred first. We defined the survival time for participants as the period from recruitment to death. In this study, participants who could not be contacted in the further follow-up survey were defined as “lost to follow-up”.

There were missing values in 11.6% of body mass index (BMI) data and less than 2% of other independent variables. A multiple-imputation approach was adopted to reduce the influence of missing values on the models [22]. Octogenarians, nonagenarians, and centenarians have different risks of morbidity and mortality; thus, we performed analyses among the three age groups separately. Covariates, including demographic variables, socioeconomic status, dietary behaviors, collected using the brief food frequency questionnaire [18,20,21], health practices, functional performance measured using the Katz scale and the Chinese version of the mini-mental state examination (MMSE) were considered for analysis [23,24,25]. On the basis of previous findings in epidemiologic or clinical studies, in our data analyses we adjusted for a number of confounding factors associated with mortality or garlic consumption. All the CLHLS data were collected by a well-trained research team member and a local county doctor or nurse using a structured questionnaire in a face-to-face interview. If a respondent was unable to answer questions owing to illness or cognitive limitations, the next of kin, a family member, or a very close friend or caregiver responded instead [18].
Demographic variables included age (as a continuous variable), sex (men or women), and residence (urban or rural). Socioeconomic status included educational background (literacy or illiteracy), occupation (farmer or other), marital status (in marriage or not in marriage), and living pattern (with family members, alone or at nursing home). Dietary behaviors, such as vegetable consumption (often, occasionally, or rarely), fruits consumption (often, occasionally, or rarely), meat consumption (often, occasionally, or rarely), fish consumption (often, occasionally, or rarely), and tea drinking (often, occasionally, or rarely) were collected using the brief food frequency questionnaire [18,20,21] and were included in the adjusted model. Health practices were assessed in terms of tobacco smoking status (current smoker, former smoker, or non-smoker), alcohol drinking status (current drinker, former drinker, or non-drinker), and currently undertaking regular exercise (yes or no).
Collected data on medical history included heart disease, cerebrovascular disease, and respiratory disease. Hypertension was defined as systolic blood pressure ≥140 mmHg or diastolic blood pressure ≥90 mmHg. Functional performance, including ADL and cognitive function, was also assessed. ADL disability was measured using the Katz scale [22]: having difficulty in performing one or more of six daily activities (bathing, dressing, eating, indoor transfers, toileting, and continence). Cognitive function was assessed using the Chinese version of MMSE, which tests the following functioning aspects: orientation, calculation, recall, and language [23]. Cognitive impairment was defined by an MMSE score of less than 18 out of 30 [24]. Among the three age groups, we determined the differences in covariates according to garlic consumption using the Cochran–Mantel–Haenszel test and one-way analysis of variance. BMI (as continuous variable) was computed as weight/squared body height in units of kg/m2. Height was measured to the nearest 1 centimeter (cm) for participants in the 2005, 2008, and 2011 surveys or was estimated according to knee height (in cm) with a validated equation for participants in the 1998, 2000, and 2002 surveys as follows: body height for men = 2.01 × knee height + 67.78, body height for women = 1.81 × knee height + 74.08 [26,27]. After adjusting for the confounding factors above, Cox proportional hazards regression model was constructed to calculate the hazard ratios (HRs) and 95% confidence intervals of mortality for garlic consumption.
To explore the robustness of the association, a number of sensitivity analyses were performed. To determine whether chronic disease (especially of the digestive system) might be associated with lack of garlic consumption, we adjusted for digestive system disease (such as gastrointestinal ulcers, chronic hepatitis or cirrhosis, and gallstones or cholecystitis), income (very rich, rich, so-so, poor, very poor), insurance (yes or no), and vitamins A, C, and E. We excluded participants who had heart disease, cerebrovascular disease, or respiratory disease. We also excluded participants who died during the first year of follow-up.
Several subgroup analyses were conducted to investigate the association between garlic consumption and all-cause mortality on the basis of the following parameters: sex (men and women); tobacco smoking status (current or former smoker, or non-smoker); alcohol drinking status (current or former alcohol drinker, or non-drinker); tea drinking status (drinker or non-drinker); ADL disability (yes or no), and cognitive function (impaired or normal) [23,24,25]. We performed multiplicative interaction treating garlic consumption as a continuous variable (garlic consumption frequency, valued as 1, 2, 3 for rarely, occasionally, and often, respectively) in the fully adjusted model. We performed the statistical analyses using SAS 9.4 (SAS Institute, Inc., Cary, NC, USA) and R software for Windows (version 3.5.0; R Foundation for Statistical Computing, Vienna, Austria).

3.2. Garlic Consumption at Baseline or at 60 Years of Age and All-Cause Mortality

In summary, garlic consumption was associated with a reduced risk of all-cause mortality. The present finding provides a limited evidence on the association of garlic with all-cause mortality among the oldest old; it advocates future research into the dose–response relationship between the quantity of garlic consumption and cause-specific mortality, especially for CVD and cancer mortality. It would seem beneficial to promote garlic intake as part of a healthy daily diet among octogenarians, nonagenarians, men, people with normal cognition, and people who rarely drink tea. If these associations are largely causal, the potential health gain from increased garlic consumption in China would be substantial on the basis of a nationally representative sample. The garlic constituents can be further studied to identify effective agents for inflammation and cancer treatment and CVD prevention. However, to verify the role of garlic or garlic supplements in longevity, our results need to be confirmed by future prospective human studies and community intervention trials.

This research was funded by National Natural Sciences Foundation of China, grant number 81273160 and 81573247. 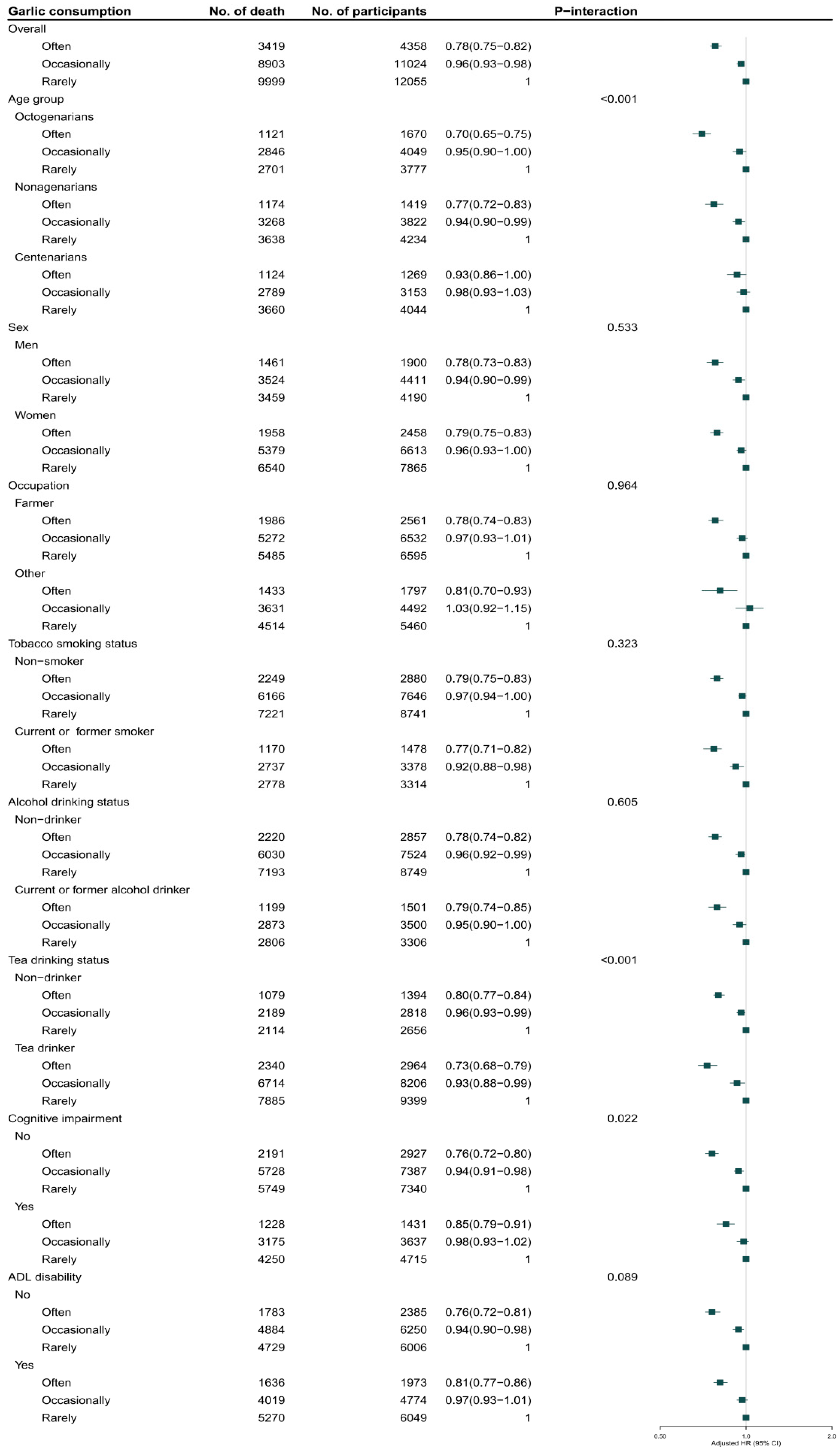