Role of Calcium and Low-Fat Dairy Foods in Weight-Loss Outcomes Revisited: Results from the Randomized Trial of Effects on Bone and Body Composition in Overweight/Obese Postmenopausal Women
Next Article in Special Issue

How Satiating Are the ‘Satiety’ Peptides: A Problem of Pharmacology versus Physiology in the Development of Novel Foods for Regulation of Food Intake
Previous Article in Journal

Background: It was previously established that Multiple sclerosis (MS) generates energy alterations at the mitochondrial level related to the loss of muscle mass. Ketone bodies, mainly beta-hydroxybutyrate (BHB), re-establish this energy alteration causing satiety, changes in body composition and a decrease in hormone-dependant hunger, such as ghrelin. The aim of this study was to establish possible improvements in body composition and the level of oxidation in patients with MS, by means of the satiating effect of a ketogenic diet. Methods: A pilot study was carried out with 27 MS patients who were given a Mediterranean isocaloric and ketogenic diet for 4 months. Anthropometric measurements, as well as satiety and hunger perception (VAS scale), were taken. In addition, BHB and paraoxonase 1 (PON1), as an oxidation marker, were measured by spectrophotometric automated assays, and ghrelin was determined by an enzyme immunoassay in the serum. All measurements were taken before and after the intervention. Results: A significant increase in satiety perception at lunch and dinner and of BHB in the blood was obtained. Hunger perception decreased significantly at lunch and dinner with similar levels of ghrelin. In addition, an important increase in lean mass and PON1 was observed. To our knowledge, this is the first study addressing improvements in body composition, oxidation state and metabolism in MS patients, based on the satiating effect of a Mediterranean isocaloric diet. Conclusion: A ketogenic diet increases lean mass and decreases inflammation and oxidation possibly as a consequence of an increase in satiety and decrease in hunger in MS patients. View Full-Text
Keywords: satiety; ketogenic diet; multiple sclerosis; β-hydroxybutyrate; ghrelin; paraoxonase 1 satiety; ketogenic diet; multiple sclerosis; β-hydroxybutyrate; ghrelin; paraoxonase 1
►▼ Show Figures 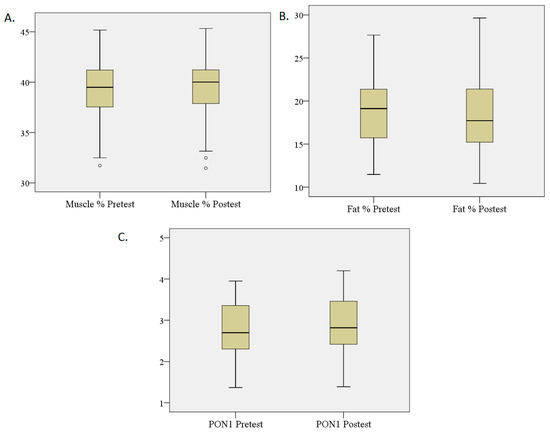