2.2. Urine Concentration of Equol and Daidzein

The concentration of equol and daidzein in urine were measured by using a modified high-performance liquid chromatography method (HPLC) [16]. The equol production status was defined by a urinary log 10 - transformed equol/daidzein ratio of −1.75 or more as described previously [17].

Fecal samples were collected in commercial containers (TechnoSuruga Laboratory Co., Ltd., Shizuoka, Japan) and were suspended in a guanidine thiocyanate solution (100 mM Tris-HCl (pH 9.0), 40 mM Tris-EDTA (pH 8.0), 4M Guanidine Thiocyanate). These samples were kept at −80 °C until DNA extraction. According to previous studies, a series of representative bacterial species in the human gut microbiota were analyzed using the primers for the V3 - V4 region of 16S rDNA of the prokaryotes [21,22]. The sequencing was conducted using an Illumina MiSeq system (Illumina, San Diego, CA, USA). The methods for quality filtering of the sequence was as follows: the only reads that had quality value scores of scores of ≥20 for more than 99% of the sequence were extracted for the analysis. Detection and identification of the bacteria from the sequences were performed using [email protected] software (World Fusion Co., Tokyo, Japan) and the TechnoSuruga Lab Microbial Identification database DB-BA 10.0 (TechnoSuruga Laboratory) at 97% sequence similarity.
We compared the relative abundance of the bacterial species in the gut microbiota between the equol producers and non-producers. The relative abundance is the percentage composition of the reads of a bacterium to the total reads of the gut microbiota. To estimate the contribution of each bacterium, the weighted average difference rank was calculated. The following 8 bacterial species that convert daidzein to equol were surveyed; Adlercreutzia equolifaciens [23], Asaccharobacter celatus [24], Bacteroides ovatus [25], Finegoldia magna [26], Lactobacillus mucosae [27], Slackia equolifaciens [28], Slackia isoflavoniconvertens [28], and Streptococcus intermedius [25].

Statistical analyses of the clinical data were performed using the Statistical Package for the Social Science (SPSS) version 20.0 (SPSS Inc., Chicago, IL, USA) and the R software (R Foundation for Statistical Computing, version R-3.4.3). Categorical variables are shown as frequencies and percentages, and, continuous variables are shown as the mean with the standard deviation or the median with the interquartile range. The categorical variables were compared using the Chi-square test and the continuous variables were compared using the Student’s t-test or Mann-Whitney U-test. A p-value of less than 0.05 was considered significant for all the tests. Alpha-diversity was evaluated using Shannon index and chao1 while beta-diversity was evaluated by principal components analysis and statistically analyzed using permutation multivariate analysis of variance.

This study was performed in accordance with the ethical standards of the Declaration of Helsinki, and approved by the ethics committee at Hirosaki University Medical Ethics Committee (2014-377). All patients provided written informed consent for this study.

This study was based on the Iwaki Health Promotion Project as a project by Hirosaki University Graduate School of Medicine, in collaboration with Aomori Heath Evaluation and Promotion Center and Hirosaki City Office, Department of Health Promotion. 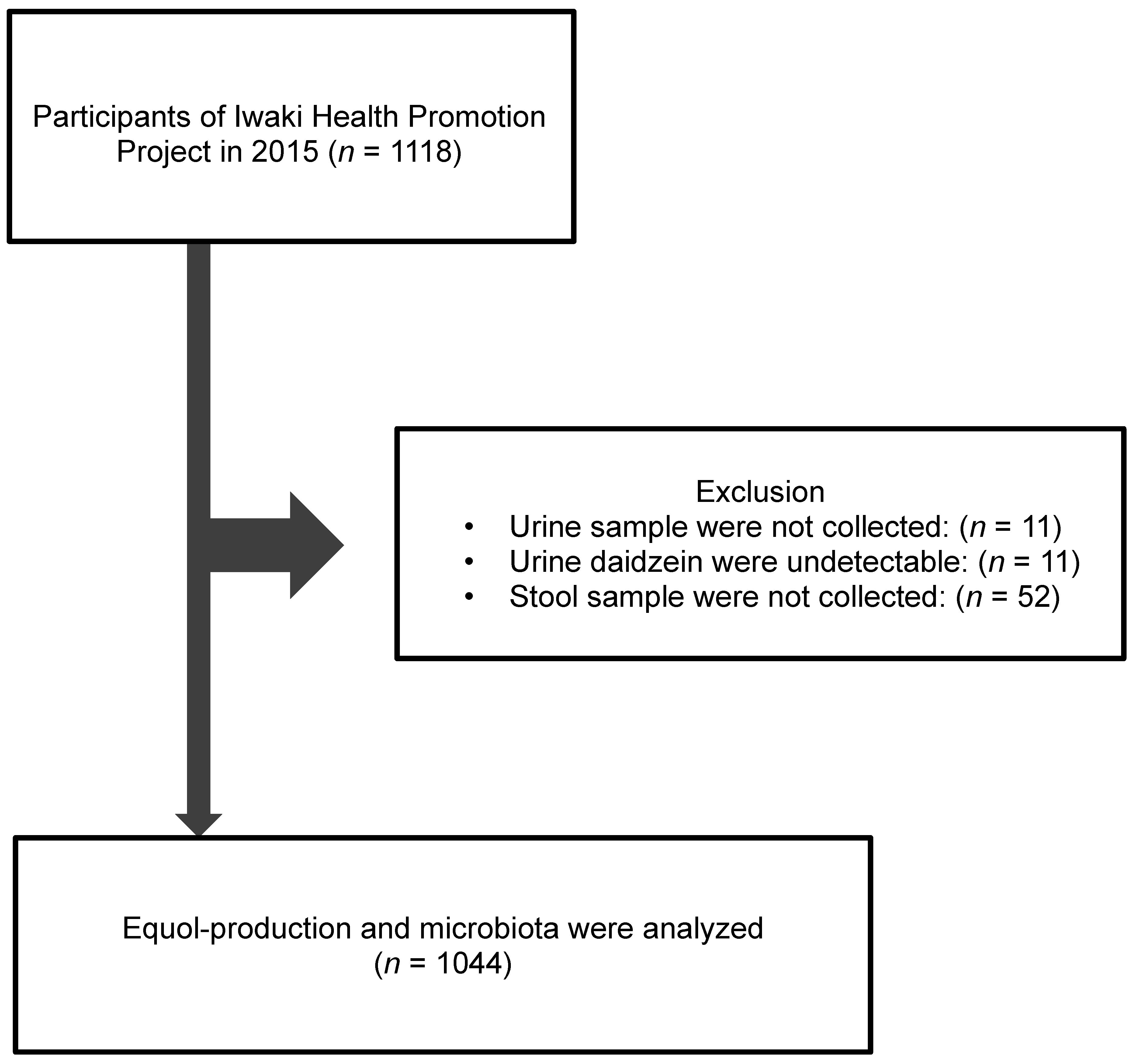