Fermentation of food products can be used for the delivery of probiotic bacteria and means of food detoxification, provided that probiotics are able to grow, and toxins are reduced in raw materials with minimal effects on consumer acceptability. This study evaluated probiotic enrichment and detoxification of kwete, a commonly consumed traditional fermented cereal beverage in Uganda, by the use of starter culture with the probiotic Lactobacillus rhamnosus yoba 2012 and Streptococcus thermophilus C106. Probiotic kwete was produced by fermenting a suspension of ground maize grain at 30 °C for a period of 24 h, leading to a decrease of the pH value to ≤ 4.0 and increase in titratable acidity of at least 0.2% (w/v). Probiotic kwete was acceptable to the consumers with a score of ≥6 on a 9-point hedonic scale. The products were stable over a month’s study period with a mean pH of 3.9, titratable acidity of 0.6% (w/v), and Lactobacillus rhamnosus counts >108 cfu g−1. HPLC analysis of aflatoxins of the water-soluble fraction of kwete indicated that fermentation led to an over 1000-fold reduction of aflatoxins B1, B2, G1, and G2 spiked in the raw ingredients. In vitro fluorescence spectroscopy confirmed binding of aflatoxin B1 to Lactobacillus rhamnosus with an efficiency of 83.5%. This study shows that fermentation is a means to enrich with probiotics and reduce widely occurring aflatoxin contamination of maize products that are consumed as staple foods in sub-Saharan Africa. View Full-Text
Keywords: fermented cereal beverage; kwete; maize; probiotics; Lactobacillus rhamnosus; aflatoxins; binding fermented cereal beverage; kwete; maize; probiotics; Lactobacillus rhamnosus; aflatoxins; binding
►▼ Show Figures 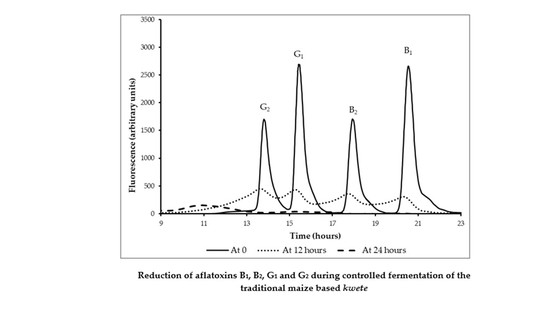