Effects of Caffeine Supplementation on Power Performance in a Flywheel Device: A Randomised, Double-Blind Cross-Over Study
Previous Article in Journal

Multi-ingredient pre-workout supplements are a popular class of dietary supplements which are purported to improve exercise performance. However, the composition of these products varies substantially between formulations, thus making comparisons challenging. Therefore, the purpose of this study was to identify a common ingredient profile of top-selling pre-workout supplements and to compare ingredient dosages to established efficacious values. The top 100 commercially available pre-workout products were analyzed for listed ingredients and amounts, if available, from the supplement facts panel. The mean ± SD number of ingredients per supplement (n = 100) was 18.4 ± 9.7 with 8.1 ± 9.9 of these ingredients included in a proprietary blend at undisclosed quantities. Relative prevalence and average amounts of the top ingredients amounted to: Beta-alanine (87%; 2.0 ± 0.8 g), Caffeine (86%; 254.0 ± 79.5 mg), Citrulline (71%; 4.0 ± 2.5 g), Tyrosine (63%; 348.0 ± 305.7 mg), Taurine (51%; 1.3 ± 0.6 g), and Creatine (49%; 2.1 ± 1.0 g). Nearly half (44.3%) of all ingredients were included as part of a proprietary blend with undisclosed amounts of each ingredient. The average amount of beta-alanine per serving size was below the recommended efficacious dose. The average caffeine content was near the low end for an effective relative dose for a 70 kg individual (3–6 mg·kg−1 of bodyweight).
Keywords: ergogenic aid; supplement; pre-workout; beta-alanine; caffeine; citrulline; creatine; strength; power; energy ergogenic aid; supplement; pre-workout; beta-alanine; caffeine; citrulline; creatine; strength; power; energy

Dietary supplements represent approximately a 30-billion-dollar industry in the United States alone [1], with over 50% of US adults reporting the regular use of one or more supplements [2]. In 1994, Congress passed the Dietary Supplement Health and Education Act, which established an official definition for a dietary supplement, stating that in order for a product to be classified as a dietary supplement it must meet one or more of the following: (1) A vitamin, (2) A mineral, (3) A herb or other botanical, (4) An amino acid, (5) A dietary substance for use by man to supplement the diet by increasing the total dietary intake, or (6) A concentrate, metabolite, constituent, or extract of one of the above categories [3]. Dietary supplement manufacturers have a lot of liberty in how they design and formulate their products. Currently, there is not a pre-market approval process needed to document the efficacy and safety before new dietary ingredients can be included into a manufactured dietary supplement product, as long as they meet the aforementioned criteria. However, the Food and Drug Administration (FDA) does require a pre-market notification of a new dietary ingredient (NDI) to be submitted by the manufacturer at least 75 days prior to marketing the NDI in a supplement [4]. Additionally, the FDA has strict guidelines for supplement facts panel labeling in regards to what ingredients are required to be listed on the label and how they are presented [5], in an attempt to provide the consumer with adequate information regarding the ingredients included in the dietary supplement. Otherwise, dietary supplement manufacturers are able to formulate products at their own discretion which leads to variable ingredient profiles across the market.
Multi-ingredient pre-workout supplements (MIPS) are a specialized category of dietary supplements intended to be consumed prior to exercise that include a blend of ingredients purported to increase exercise performance [6]. A recent 2018 review found MIPS ingestion led to acute ergogenic benefits following a single dose while subsequently augmenting training adaptations when routinely ingested over time in conjunction with a training program [7]. The authors also found minimal reports of adverse events following continued supplementation. MIPS often contain a proprietary blend or matrix formula in an attempt to maintain a level of confidentiality with product formulations [8]. The FDA only mandates that the total weight of the ingredients included in the blend are listed but the individual ingredients amounts themselves do not need to be disclosed [5]. However, the ingredients need to be listed in a descending order of predominance by weight and followed by a symbol specifying that the daily values of such ingredients are not established [5]. Unfortunately, this does not provide the consumer with adequate information to determine whether an effective dose of each ingredient is included in the product or to ensure safety if they are also consuming other related dietary supplement products. For example, if an individual consumes a MIPS in addition to a multivitamin, an energy shot, or other caffeinated beverage, they could be unknowingly at risk of ingesting high levels of ingredients such as caffeine or niacin that could result in adverse events.
A variety of factors likely influence manufacturer decisions when it comes to product development of MIPS, such as physiological rationale for structure and function claims, clinically supported evidence of efficacy, cost efficiency, raw ingredient availability, patents of formulations, and taste or texture. There does appear to be a common core list of ingredients commonly found in MIPS, including caffeine, beta-alanine, creatine, citrulline, taurine, tyrosine, and B vitamins; however, not all products contain the same core ingredients, making it difficult to compare one product to another [7]. Further, MIPS are sometimes confused with energy drinks, energy shots, blood flow enhancers, or weight loss supplements as they can contain similar ingredients. Although there is some overlap of certain ingredients, the purported benefits and mechanisms of action of the respective products are different and tend to include different complimentary ingredients [9,10,11]. For example, MIPS tend to contain ingredients that are purported to improve acute exercise performance in addition to enhancing training adaptations over time such as caffeine, beta-alanine, creatine, and betaine. Conversely, energy shots and energy drinks generally only contain caffeine and a select number of vitamins or amino acids that are more targeted at increasing energy or levels of alertness and can be ingested at any time throughout the day. Furthermore, they tend to lack any additional ingredients that influence muscular performance or adaptations. Currently, there is not a well-established list of criteria that classifies a supplement as a MIPS, nor is there an accepted common ingredient profile of such a product. Therefore, the focus of the current study was to examine supplement facts panels of the top selling commercially available MIPS within the US to characterize common ingredient profiles to help establish a standard definition of a MIPS product. A secondary aim of the study was to compare the mean ingredient profile of commonly identified ingredients (if disclosed) and to evidence-based recommendations regarding an efficacious dose.

The top 100 commercially available MIPS were identified and compiled from a commercial retail website (www.bodybuilding.com) as of October 2018. Independent sales data were not available, so the included MIPS products were identified after filtering the searched products using a “best-selling” criteria as previously used by Desbrow and colleagues [12]. For the purpose of this study, a MIPS product must have met the following criteria to be classified as a pre-workout supplement and included in the analysis: (A) Marketed as a pre-workout supplement; (B) Recommended to be ingested prior to exercise; and containing at least three of the following ingredients: (1) Caffeine, (2) Beta-alanine, (3) Citrulline, (4) Niacin, (5) Creatine, (6) Taurine, (7) Tyrosine, (8) Arginine, (9) Branched chain amino acids, (10) Choline Bitartrate, or (11) Betaine. These criteria were used to create distinction between MIPS and other similar products that may be marketed as a pre-workout supplement but are more similar to strictly blood flow enhancers or energy shots. Two research staff members independently analyzed each supplement facts label to compile listed ingredients and corresponding amounts, if available, for each product. Special notation was used for ingredients that were listed on the product label as part of a propriety blend and therefore specific ingredient amounts were not available. Only ingredients included in the nutrition facts and supplement facts sections of the label were included. Thus, ingredients listed as “other ingredients”, such as preservatives, artificial flavoring agents, and food coloring, were not included in the analysis. Because the information used for analysis is publicly available, approval from an Institutional Review Board was not required.

All data are presented as means ± SD. Basic descriptive and frequency analysis was performed for the included ingredients across each product to create a common MIPS ingredient profile. Means and standard deviations were reported for each ingredient explicitly listed on the supplement facts label. Frequency analysis was used to determine the relative prevalence of listed and unlisted ingredients within the dataset as well as the prevalence of supplements included in the analysis which contained an ergogenic amount of key ingredients. Linear regression analysis was employed to determine the relationship between the included amount of key ingredients and total serving size of each supplement. Correlation coefficients were interpreted as weak (r ≤ 0.35), moderate (0.36 ≤ r ≤ 0.67), or strong (0.68 ≤ r ≤ 0.99) [13]. An alpha level of 0.05 was used for all statistical determinations.

By establishing a common ingredient profile and more standard definition of a MIPS, future research can now better investigate the efficacy, and more importantly, the safety of these products by creating a level of distinction between MIPS and other related products. The findings of the present investigation indicated that beta-alanine and citrulline are the most common ingredients found in multi-ingredient pre-workout supplements. The average amount of beta-alanine per serving size falls well below the recommended efficacious dose. The average dose of caffeine is near the low end of an effective relative dose (3–6 mg·kg−1 of bodyweight) for a 70 kg individual at 3.6 mg·kg−1 of bodyweight. Additionally, nearly half of the ingredients in MIPS are manufactured as part of a proprietary blend with undisclosed amounts of each ingredient. It may be in the best interest of the consumer to select a MIPS product that discloses all ingredient amounts and contains appropriate dosages of each ingredient. Consumers may also want to pay close attention to specific ingredients that may be under-dosed (beta-alanine and creatine in particular), as they may want to supplement with other products in order to optimize the associated benefits. Further, it is advisable to reduce ingestion of other caffeine or niacin containing products to minimize the risk of any adverse events from consuming excess amounts. Future research should examine how individuals are utilizing these products, particularly if they are being combined with other related products, in an attempt to identify any safety concerns. Additionally, more information is needed regarding the purity and quality of MIPS products, specifically ones that contain proprietary blends, so that individuals know exactly what they are consuming with each serving. 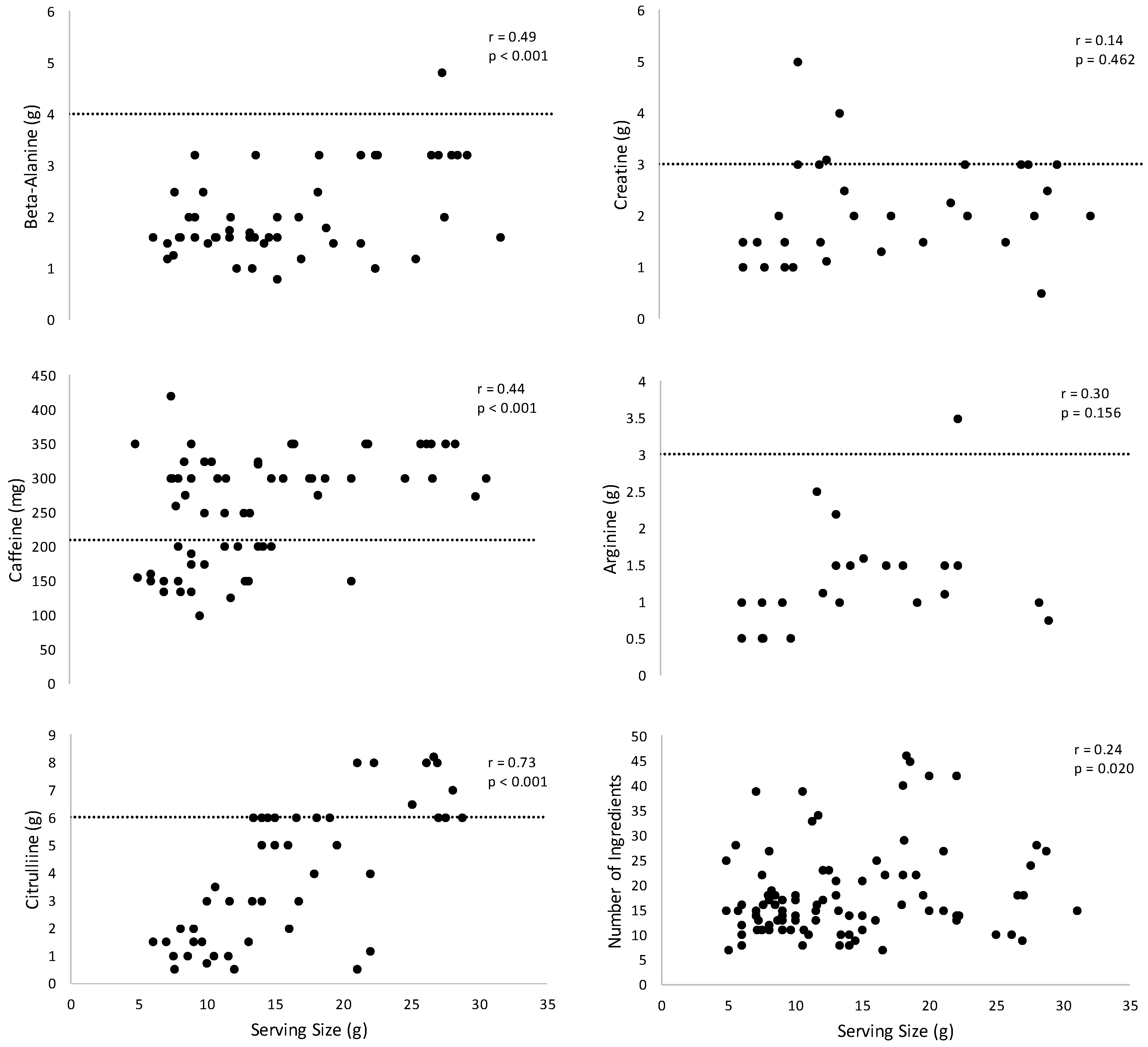