The Mediterranean diet (MD) is a nutritional model proposed by Ancel Keys, based on the dietary traditions shared around the fifties (1950s) by populations that inhabited the Hellenic peninsula, Italy, and the other countries overlooking the Mediterranean Sea [1]. In descriptive terms, MD is the dietary pattern historically and culturally prevailing among people residing in the olive tree-growing areas of the Mediterranean region before globalization made its effect on lifestyle, diet included [1,2]. Even if the different regions in these areas have their own dietary traditions, they could be considered as variants of the most comprehensive MD [3]. Graphically, it is represented by a pyramid that represents food according to their frequency of intake: rarely to often (weekly or daily), from the basis to the apex, respectively [4].
The MD model is closely related to the history of civilization of the areas surrounding the Mediterranean Sea, and the foods characterizing this dietary pattern have been part of the diet and consumed since many centuries ago. In ancient times, the staple food of the populations residing in the setting of the Mediterranean Sea were non-starchy vegetables (present in abundancy and assortment), minimally processed whole-grain cereals, legumes, nuts, and seeds [5]. Nowadays, the MD is composed by plentiful use of olive oil, high consumption of fruit, vegetables, legumes, cereals and nuts, regular but moderate intake of wine (especially red wine) with meals, moderate consumption of fish, seafood, fermented dairy products (yogurt and cheese), poultry and eggs; and limited consumption of red and processed meats and sweets [6].
However, the investigation of the MD’s effects on health did not begin until the 20th century. The first study to observe a protective effect of the MD or some of its components was the Seven Countries Study [7]. It reported a strong inverse association between monounsaturated fatty acid intake (the main source of fat from olive oil, essential component of the MD) and overall mortality, especially due to coronary heart disease (CHD) and cancer. Afterwards, MD and its effects on health were mostly investigated by means of observational studies and personal reviews, with the exception of the Lyon Heart Study in France, which revealed that modified MDs were associated with remarkable reductions in CHD event rates and cardiovascular (CV) mortality [8], and other small scale clinical trials [9]. In recent times, the number of randomized controlled trials (RCTs) and meta-analyses increased significantly, with the objective to examine the impact of the MD on various health outcomes [10].
The MD pattern reached considerable importance due to its role in the prevention of cardiovascular diseases (CVDs). The inverse association between adherence to MD and CVD mortality, reported by Seven Countries study [7], paved the way for the increasing importance that MD acquired in cardiovascular epidemiology [1,7]. As a result, the American Heart Association qualified the Mediterranean Food Pattern as potentially effective for the prevention of CHD, though emphasizing the need of more studies before suggesting people to pursue a MD pattern [11].
Although the first references to the benefits of MD on health focused on the protective effect against CVDs, its effects on other health issues were later investigated. For instance, the available literature reports the inverse association between specific nutrients, food components and the Mediterranean dietary pattern, and several health conditions, such as: Specific types of cancer, diabetes mellitus, obesity, cognitive decline and mental health, respiratory diseases, osteoarthritis, and quality of life or healthy aging [10].
To date, several studies have been conducted in Spain and other Mediterranean countries in the scope of MD and its relationship with health, and the evidence of the beneficial role of this pattern is being constantly enhanced [12]. The PREvención con DIeta MEDiterránea (PREDIMED) study is a primary prevention multicentre randomised controlled trial (RCT) designed to test the hypothesis that the MD would be superior to a low-fat diet for CVD protection in asymptomatic patients at high CV risk [13].

The PREDIMED study is a large, parallel group, multicentre, randomized, controlled, nutritional intervention trial designed to assess the effects of the Mediterranean Diet on the primary prevention of CVD (www.predimed.es) [14]. The study was conducted in Spain from 2003 to 2011 and was funded exclusively by Instituto de Salud Carlos III, while food industries provided Extra Virgin Olive Oil (EVOO) and nuts free of charge.
The protocol, design and methods of the trial have been reported previously [15,16] and their detailed description goes beyond our objectives. To sum up, community-dwelling men (aged 55–80 years old) and women (aged 60–80) without predetermined diagnosis of CVD were included in the study, and were considered acceptable to participate if they had either type 2 diabetes mellitus (DM) or ≥ 3 of the following major CV risk factors: hypertension, high plasma low-density lipoprotein (LDL) cholesterol, low plasma high-density lipoprotein (HDL) cholesterol, overweight or obesity (BMI ≥ 25 kg/m2), current history of smoking and family history of premature CHD. The enlistment period lasted from October 2003 to June 2009, and enrolled 7447 participants that were randomly assigned to one of the three nutritional intervention groups (ratio 1:1:1) in the Spanish Primary Care Centres affiliated to 11 recruiting centres. Two groups were prescribed a MD enriched with either Extra Virgin Olive Oil (EVOO) (n = 2543) or nuts (walnuts, almonds and hazelnuts) (n = 2454), and the third group (control) was prescribed a low-fat diet (n = 2450). None of the three dietary protocols included in the trial provided energy restrictions, and no intervention on participants’ physical activity status was performed.
Validated food frequency questionnaires covering 137 food items plus vitamin/minerals supplements were collected yearly by trained dietitians, and adherence to the MD was assessed through a 14-items questionnaire [17]. Fasting blood and urine samples were obtained, and serum, plasma and DNA specimens were stored. Biomarkers of adherence to the supplemental foods (urinary hydroxytirosol as marker of EVOO consumption and plasma α-linolenic acid as marker of walnut consumption) were determined in random sub-samples [18].
In addition to the institutional review board of the Hospital Clinic in Barcelona, Spain (approved on 16 July 2002), the institutional review boards of each recruitment centre also approved the study protocol, and participants gave their written informed consent.
The primary aim of the trial was to assess the effects of two MDs (MD + EVOO or MD + nuts) on a composite endpoint of cardiovascular death, myocardial infarction and stroke (primary outcome), compared to a low-fat control diet. Secondary endpoints were: death of any cause, incidence of heart failure, DM, dementia or other neurodegenerative disorders, and major cancers (colorectal, breast, lung, stomach and prostate). To better assess the impact of dietary changes on the risk of clinical events, intermediate outcomes were also evaluated, for instance changes in blood pressure (BP), blood lipids levels, fasting glycaemia, weight gain, and markers of inflammation [16].
According to the pyramid of evidence relative to health science, randomized clinical trials (RCTs) provide the best, and most robust and accountable scientific evidence [19]. Thus, the aim of the present paper is to review and analyse the results of the main and secondary outcomes, as well as the post hoc analyses within the frame of the PREDIMED study.

The research was conducted in PubMed, and included studies published from February 2006 to August 2019. The MeSH term “PREDIMED” was used as a key word. Titles and abstracts were independently scanned to include all potential studies identified as a result of the researches. The exclusion criteria were: studies not carried out within the scope of PREDIMED, protocols, letters, commentaries, reviews, studies related to PREDIMED-Plus and studies written in languages other than English. We obtained information for the following variables: number of participants at baseline and at the end of the intervention, characteristics of the participants, duration of the intervention, main objective of the intervention, and conclusions, as they appeared in the article.

In conclusion, the contribution of the PREDIMED study as a commendable dietary intervention study is certain. This trial present as primary endpoint a composite of CV events and, in the frame of the study, sub-group analyses have been performed to assess various secondary outcomes. The scope of this review was to sum up the experimental outcomes of those studies. Randomized controlled trials within the scope of the PREDIMED study demonstrated the risk-reducing effects on major health problems and risk factors as well as the current and known effects of the Mediterranean diet. When the diet is considered as the main determinant of many health outcomes, we testify the Mediterranean diet as a comprehensive diet model that overcomes a single food or single nutrient approach.

L.S.-M. and D.K. conceived the original idea for the review. L.S.-M. drafted the aim of the work and the analytical plan. D.K. organized and conducted the literature research and the analysis of the selected papers, preparing the first draft of the manuscript. L.T. critically revised the whole manuscript, checking the selection process and the papers included. Finally, she set up the tables and the final English version of the manuscript. All authors contributed to the critical appraisal of the review and approved the final version.

Lluís Serra-Majem is the Editor in Chief of Nutrients. The other authors have no conflict of interest to declare. 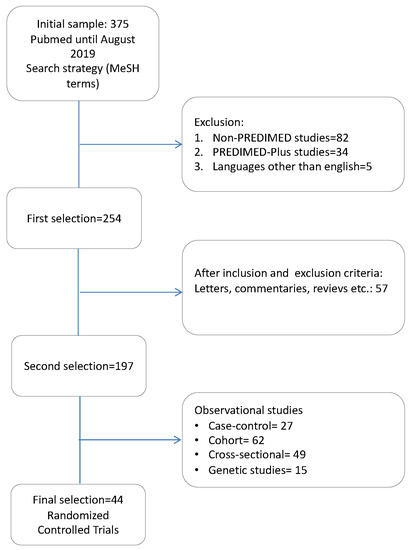 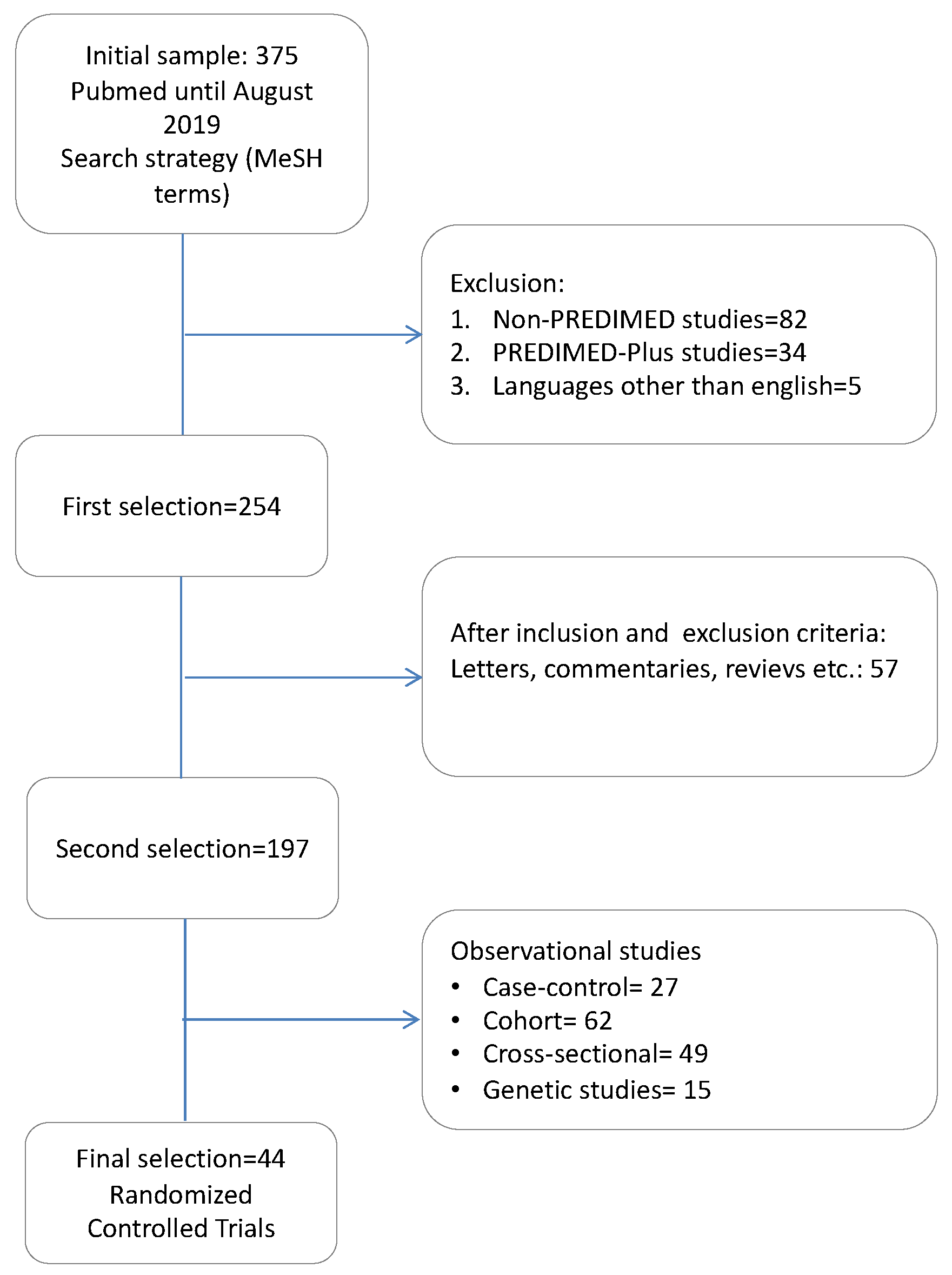 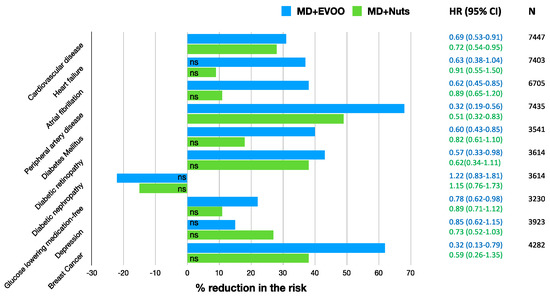 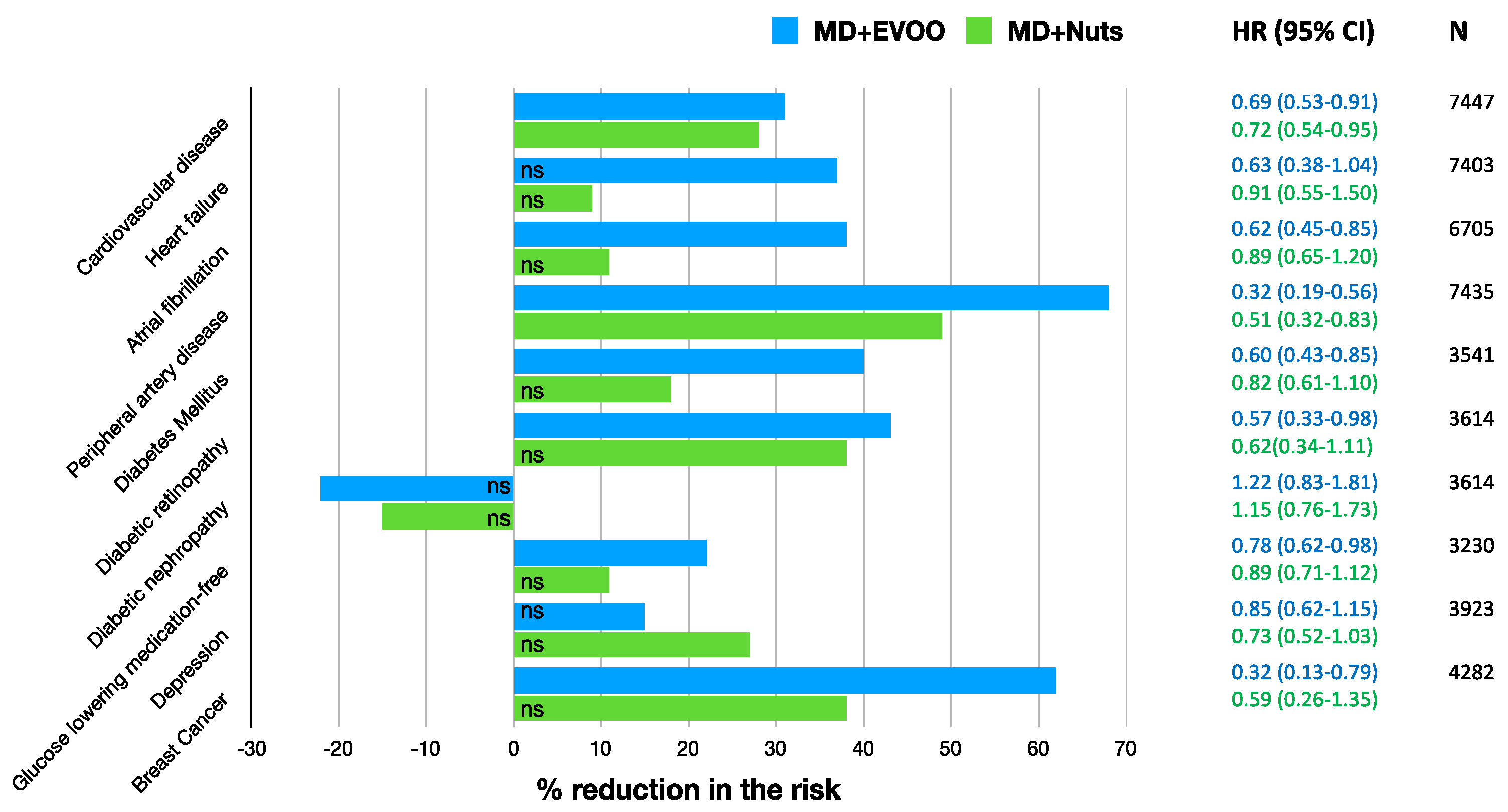