Berry-Enriched Diet in Salt-Sensitive Hypertensive Rats: Metabolic Fate of (Poly)Phenols and the Role of Gut Microbiota

Irritable bowel syndrome (IBS) is a functional gastrointestinal disorder characterized by chronic abdominal pain with altered bowel habits [1]. Visceral hypersensitivity is considered to be one of the most important underlying mechanisms and is a hallmark of IBS [2]. Stress alters the visceral sensory function and has a significant impact on the development and exacerbation of IBS symptoms [3].
At the same time, there have been several reports showing that compromised gut barrier function manifested by gut hyperpermeability is observed in some patients with IBS, and stress also enhances gut permeability [3,4]. Impaired gut barrier leads to bacterial translocation causing increased lipopolysaccharide (LPS) and proinflammatory cytokines, which is also considered to be a pivotal feature of IBS [5,6,7]. Actually, it was reported that circulating pro-inflammatory cytokines and LPS are increased in IBS patients [5,8,9,10]. Moreover, we previously showed that LPS induced visceral hypersensitivity and gut barrier disruption via interleukin-6 (IL-6), IL-1 [7], and toll-like receptor 4 (TLR4) signaling [4].
Water avoidance stress (WAS) is a psychological stress protocol causing visceral hypersensitivity and gut hyperpermeability, and now WAS-loaded rats are generally accepted as the animal model of IBS [11]. We have recently demonstrated that IL-6, IL-1β, and TLR4 pathways mediated these visceral changes induced by repeated WAS [4,12], which is similar to the LPS-induced IBS model. These results suggest that TLR4-cytokine signaling is a significant contributor to IBS [13].
Grape seed extract (GSE) is produced as a by-product of wine and grape juice. It is rich in polyphenolic compounds including proanthocyanidins, which have anti-oxidative and anti-inflammatory properties [14,15]. These beneficial effects are considered to contribute to the prevention of cancer, cardiovascular diseases and diabetes [14,15]. Recent studies showed that GSE supplementation inhibited intestinal hyperpermeability and the expression of proinflammatory cytokines in IL-10-deficient colitis [16,17]. Furthermore, GSE was found to reduce plasma levels of LPS and proinflammatory cytokines with concomitant protection of gut barrier function mediated by tight junction (TJ) structure in animal models of obesity [18,19]. Thus, we hypothesized that GSE improves visceral sensation and gut barrier function via suppressing the TLR4-cytokine signaling and maintaining TJ structure, which are beneficial factors in the treatment of IBS.
In the present study, we investigated the effects of GSE on visceral allodynia and colonic hyperpermeability induced by repeated WAS. Moreover, the actions of GSE in epithelial monolayers in vitro were also evaluated.

This study involved seven-week-old male Sprague-Dawley rats (Charles River Laboratories, Atsugi, Japan) that weighed about 300 g. The animals were group-housed (3–4 rats/cage) in a controlled environment with a temperature of 23–25 °C and a 12/12-h light/dark cycle in the animal care facility of Asahikawa Medical University. Rats were allowed ad libitum access to food (Solid rat chow, Oriental Yeast Co., Ltd., Tokyo, Japan) and water. All studies were approved by the Research and Development and Animal Care Committees at Asahikawa Medical University (#17149, approved on 2 August 2017) and the Ethics Committee of Animal Experiment of Suntory (APRV000551, approved on 15 October 2017) in accordance with the Internal Regulations on Animal Experiments at Asahikawa Medical University and Suntory Holdings Limited, which are based on the Law for the Humane Treatment and Management of Animals (Law No. 105, 1 October 1973).

GSE was prepared from grape seeds (Vitis vinifera Linne) using ethanol and water as eluents and was primarily composed of 89.3% proanthocyanidins and 6.6% monomeric flavanols by dry weight (Kikkoman Biochemifa Company, Tokyo, Japan) [20]. The dose of GSE was determined according to a previous report [17].

Colonic balloon distention was performed in conscious rats to elicit abdominal muscle contractions (visceromotor response, VMR) that were measured by an electromyogram (EMG), this is a previously validated, quantitative measure of visceral nociception [7,12]. In the present study, the VMR threshold, defined as the volume (mL) of the distended balloon that induced visceral pain, was measured.

In non-fasted rats, a small skin incision was made under anesthesia for the insertion of an electrode (Teflon-coated stainless steel, 0.05-mm diameter, MT Giken, Tokyo, Japan) approximately 2 mm into the left external oblique muscle. Cyanoacrylate instant adhesive was used to fix the electrodes to the muscle and the incised skin. The electrode leads were then directly externalized through the closed incisions. A distension balloon (6-Fr disposable silicon balloon urethral catheter, JU-SB0601, Terumo Corporation, Tokyo, Japan) was placed intra-anally such that the distal end was 2 cm proximal to the anus.

After the electrode was implanted and the balloon was placed, the rats were placed in Bollmann cages and acclimatized to the experimental conditions for a period of 30 min prior to testing. The electrode leads were then connected to an EMG amplifier. The EMG signals were amplified, filtered (3000 Hz), digitized by a PowerLab system (AD Instruments, Colorado Springs, CO, USA), and finally recorded using LabChart 7 (AD Instruments). Thirty min after the surgery, colonic distension was performed, as previously reported [12], using the ascending method of limits paradigm with phasic distensions through manual inflation of the balloon with water by syringe. The distention was progressively increased in increments of 0.1 mL every 5 s until a VMR consisting of significant sustained abdominal muscle contractions was detected (Figure 1a). The VMR threshold was assessed twice with an interval of 2 min, and the mean was calculated for each individual animal. The percentage change in threshold was calculated as the threshold value after drug administration divided by the basal threshold value and then multiplied by 100.

Colonic permeability was measured as reported previously [4]. Under anesthesia, the rats underwent laparotomy to ligate the colon at the junction with the cecum. An open-tipped catheter (3-Fr, 1-mm internal diameter, Atom, Tokyo, Japan) was then inserted into the proximal colon through the small hole made by a puncture using a needle at the 1 cm distal from the ligation and secured by a ligature. Phosphate-buffered saline (PBS) was used to gently flush the colon through the catheter to wash out all stool. The colon was additionally ligated at approximately 4 cm from the junction with the cecum, and 1 mL of 1.5% Evans blue (Sigma-Aldrich, St. Louis, MO, USA) in PBS was instilled into the colon segment through the catheter. The rats were euthanized after 15 min, their colons were excised, washed with PBS and 1 mL of 6 mM N-acetyl cysteine, opened, and then placed in 2 mL of N,N-dimethylformamide for 12 h. The Evans blue concentration in the supernatant was measured using a spectrophotometer at 610 nm to determine permeability.

Four groups of six to seven rats were prepared. Before subjecting the animals to WAS or sham stress, the rats underwent intragastric administration of either GSE (100 mg/kg, once daily) or vehicle for 7 days. On the 8th day, GSE or vehicle was administered again followed by measurement of the basal VMR threshold 1.5 h after administration. WAS or sham stress was then applied for 1 h. Daily stress sessions were implemented for three consecutive days, and GSE or vehicle was also administered before the stress. On the 11th day, GSE or vehicle was administered and the threshold was recorded followed by the measurement of colonic permeability 24 h after undergoing the last stress session (Figure 1b). We previously demonstrated that this repeated WAS protocol successfully induced visceral allodynia and increased colonic permeability in rats [4]. All in vivo experiments were done using the same animals.

Statistical analyses were conducted with the use of IBM SPSS statistics 25 (IBM, Armonk, NY, USA). All data were presented as mean ± S.E.M. Multiple comparisons were performed using Dunnett’s test. Correlation analysis was assessed by Pearson’s test. p < 0.05 were considered to indicate statistical significance.

WAS significantly decreased the threshold of VMR, and GSE suppressed this response (Figure 2a). Consistent with a previous report [4], WAS increased colonic permeability, which was inhibited by GSE (Figure 2b).

Colonic levels of IL-6 and IL-1β were significantly increased by WAS (Figure 3a,b), and GSE significantly suppressed the increase in IL-6. Additionally, GSE also tended to inhibit the elevation of IL-1β levels, but not significantly. Moreover, GSE treatment attenuated the WAS-induced increase in colonic TLR4 expression (Figure 3c,d).
TJ structure plays an important role in the intestinal barrier function. Claudin-2 is known to induce leaky gut barrier [22], and claudin-3, claudin-7, ZO-1 are markers of a fully functional intestinal barrier [23,24,25]. WAS increased claudin-2 and concomitantly decreased claudin-3 expression (Figure 4a–c). GSE administration significantly inhibited the WAS-induced increase in claudin-2 expression. There were no significant changes in the levels of claudin-7 and ZO-1 following WAS (Figure 4a,d,e).
Next, we investigated the relationships between colonic permeability and the parameters measured in rats used in all experiments. Consistent with a previous report [26], colonic permeability was negatively correlated with the VMR threshold (Figure 5a). Interestingly, colonic permeability was positively correlated with the levels of IL-6, IL-1β, TLR4, and claudin-2 (Figure 5b–e).

Since WAS elevated colonic levels of IL-6 and IL-1β, the effects of these cytokines on epithelial permeability in Caco-2 cell monolayers were investigated. Cytokine stimulation decreased TEER and increased the unidirectional flux of carboxyfluorescein, indicating the disruption of TJ integrity (Figure 6a,b). In addition, claudin-2 expression was significantly elevated, while the expression of claudin-3 and claudin-7 was reduced (Figure 6c–f). GSE blocked the observed cytokine-induced changes (Figure 6c–f). In contrast, ZO-1 expression was not significantly altered (Figure 6g).

GSE ameliorated repeated WAS-induced visceral allodynia and colonic hyperpermeability via inhibition of TLR4 and proinflammatory cytokine signaling with improving TJ integrity. Thus, GSE may be useful for the treatment of IBS.

We would like to thank Toshihiko Fukuda for useful discussions. We are also grateful to Kyoko Yamamoto for her assistance in these experiments.

H.A., M.I., T.I., H.S. are employees of Suntory Wellness Limited. Regarding matters other than those described in funding, the authors declare no conflict of interest. 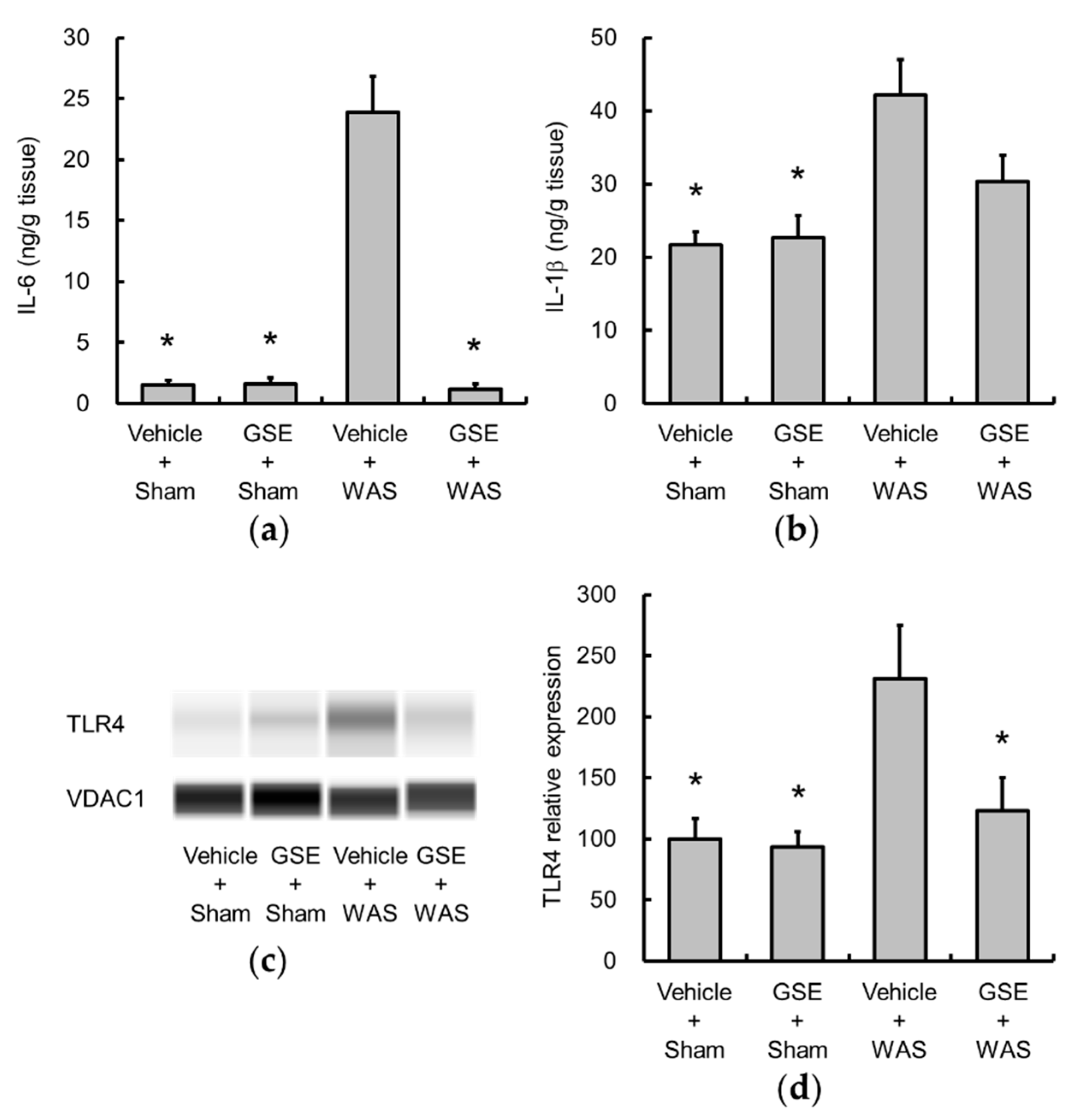 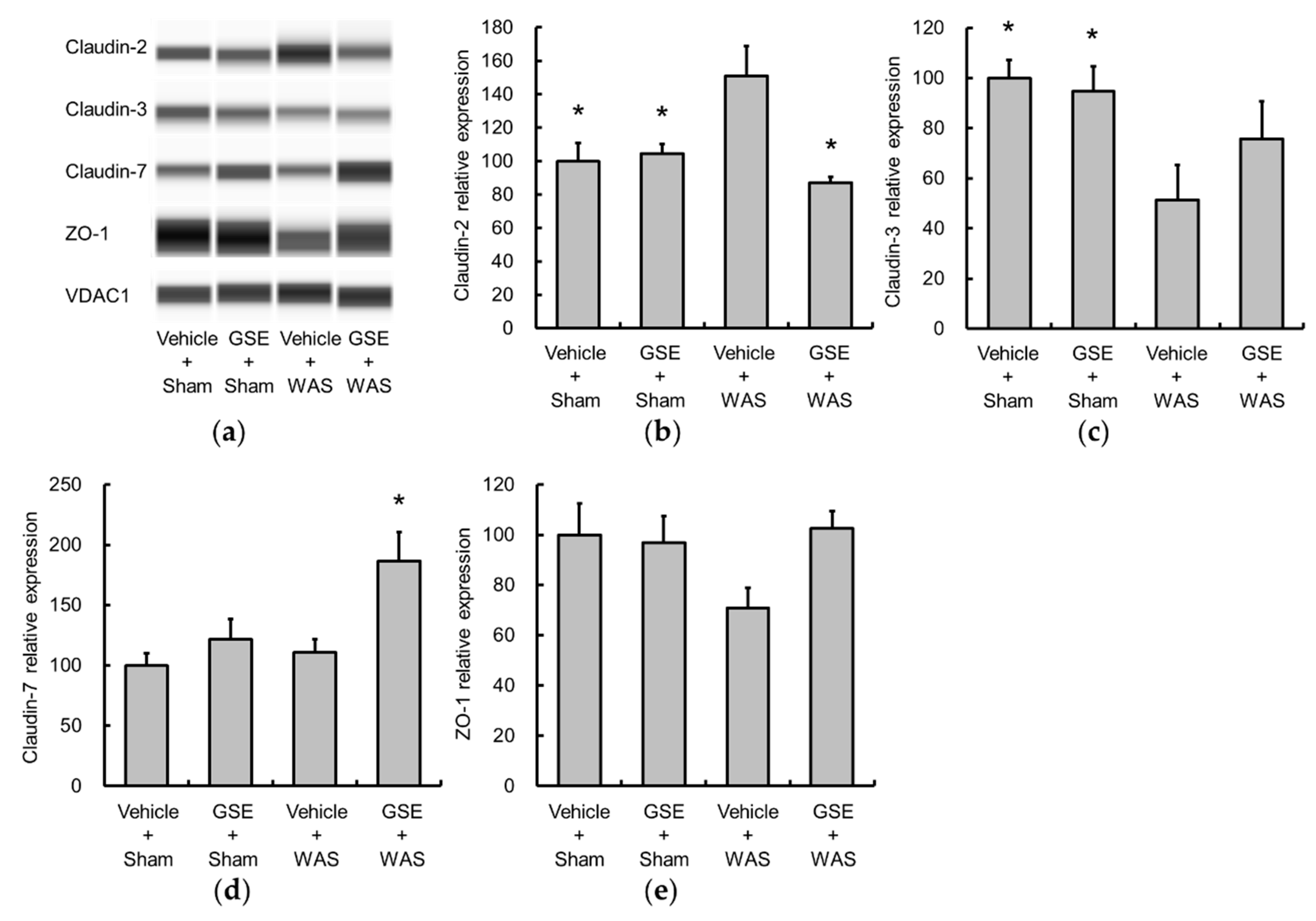 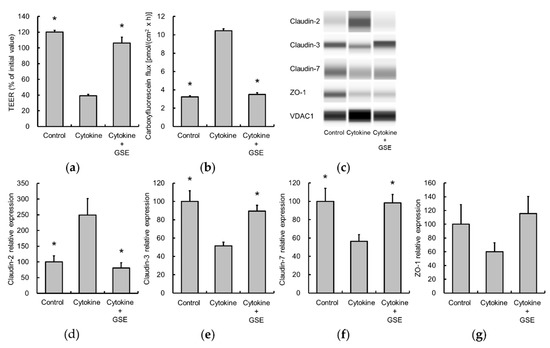 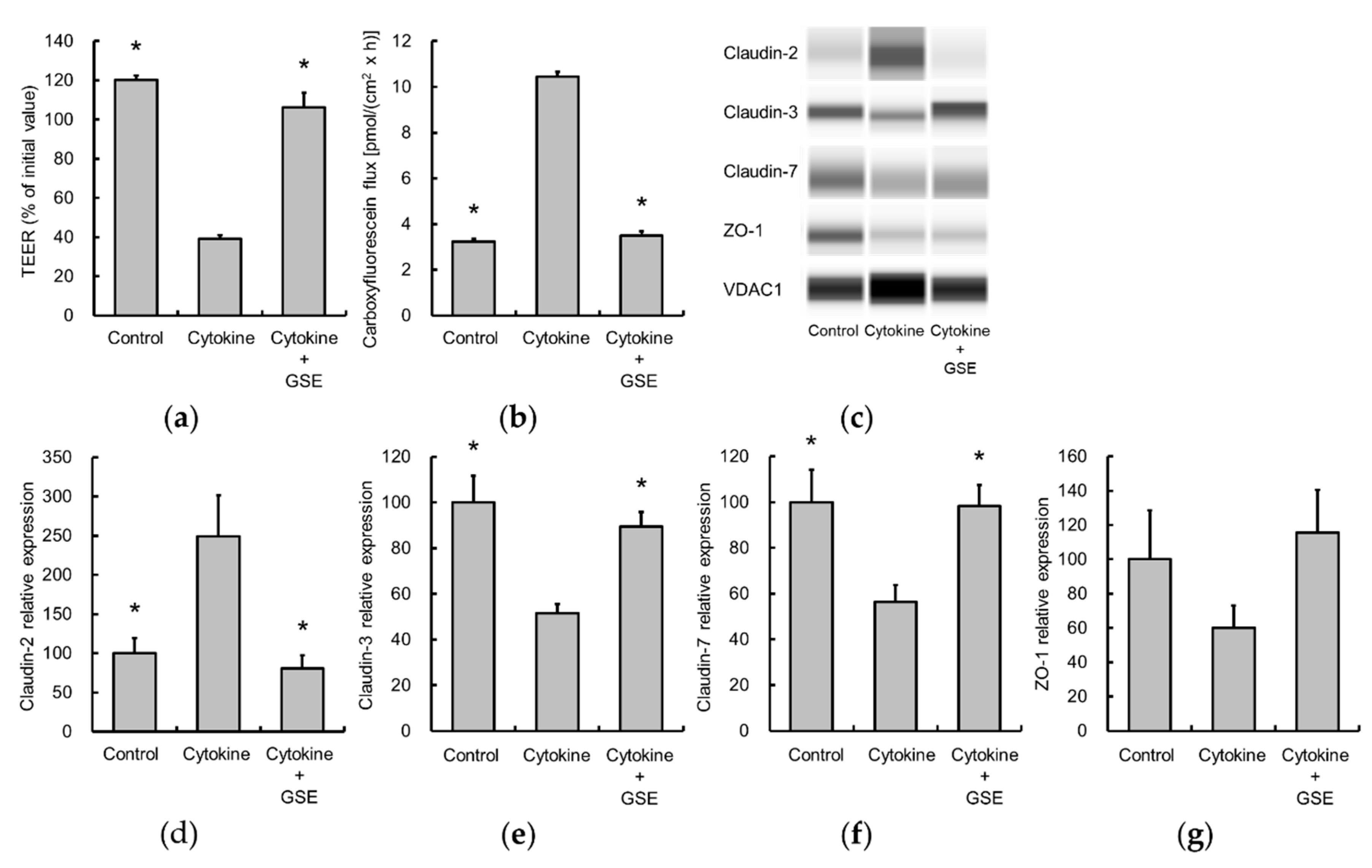