Dietary Patterns and Their Sociodemographic and Lifestyle Determinants in Switzerland: Results from the National Nutrition Survey menuCH
Next Article in Special Issue

An Update on the Effects of Glyceollins on Human Health: Possible Anticancer Effects and Underlying Mechanisms
Previous Article in Journal

Blueberries contain many different phytochemicals which might be responsible for their disease preventive properties. In a previously conducted human dietary intervention study, we showed that a 4-week intervention with blueberry–apple juice protected the participants against oxidative stress and modulated expression of genes involved in different genetic pathways contributing to the antioxidant response. The present study investigates the effect of different blueberry varieties (Elliot, Draper, Bluecrop, and Aurora, and the blueberry–apple juice from our previous human dietary intervention study), and four different single compounds (vitamin C, peonidin, cyanidin, and quercetin) on antioxidant capacity and gene expression changes in colonic cells in vitro, and compares the outcome with the earlier in vivo findings. The results demonstrate that all blueberry varieties as well as the blueberry–apple juice were more effective in reducing oxidative stress as compared to the single compounds (e.g., DNA strand break reduction: EC50: Elliot 8.3 mg/mL, Aurora and Draper 11.9 mg/mL, blueberry–apple juice 12.3 mg/mL, and Bluecrop 12.7 mg/mL; single compounds). In addition, the gene expression profiles (consisting of 18 selected genes from the in vivo study) induced by the blueberry varieties were more similar to the profile of the human intervention study (range 44–78%). The blueberry variety Elliot showed the strongest and most similar effects, almost 80% of gene expression modulations were similar compared to the in vivo results. From the single compounds (range 17–44%), quercetin induced the most comparable gene expression changes, i.e., 44%. This approach could be useful in agriculture for identifying crop varieties containing combinations of phytochemicals which show optimal preventive capacities. View Full-Text
Keywords: disease risk reduction; blueberry extracts; (combinations of) phytochemicals; antioxidant capacity; gene expression profiles disease risk reduction; blueberry extracts; (combinations of) phytochemicals; antioxidant capacity; gene expression profiles
►▼ Show Figures 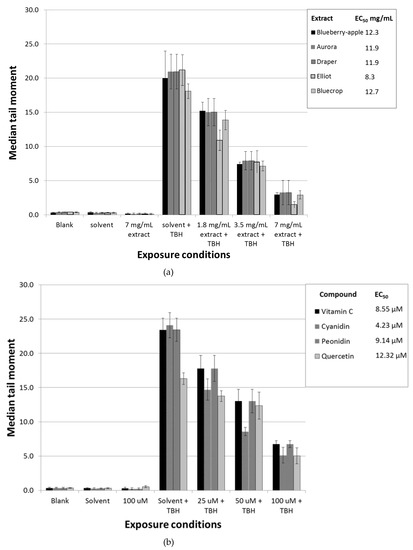