Dietary Composition and Cardiovascular Risk: A Mediator or a Bystander?

Trimethylamine N-oxide (TMAO) is considered a novel risk factor for cardiovascular diseases. Several studies demonstrated that polyphenols are able to inhibit the growth of TMA-producing bacterial strains, and resveratrol (RSV) reduced TMAO levels in mice. In the present study, we evaluated the TMAO-reducing effect of a novel nutraceutical formulation containing grape pomace extract in humans (Taurisolo®). The Taurisolo® polyphenol content was evaluated by a High Performance Liquid Chromatography-diode-array detector (HPLC-DAD) method, and RSV was monitored as an indicative marker. After in vitro GI digestion, intestinal bioaccessibility of RSV was 92.3%. A randomized, placebo-controlled, cross-over trial was carried out to evaluate the TMAO-reducing effect of Taurisolo®. In acute, the maximum levels of RSV were detected both in serum and whole blood 60 min after the administration of Taurisolo®; in chronic, a significant increase of RSV was detected in serum after the 4-week treatment. After 4 weeks, the levels of TMAO were significantly decreased in the treatment group compared to placebo (63.6% vs. 0.54%, respectively, P < 0.0001). In conclusion, our data show that Taurisolo® may represent a novel and useful natural remedy to reduce prognostic markers for incident cardiovascular events. Undoubtedly, further in vitro and in vivo studies need to be performed in order to elucidate possible mechanisms of action and corroborate our preliminary results. View Full-Text
Keywords: TMAO; grape marc; polyphenols; resveratrol; nutraceutical TMAO; grape marc; polyphenols; resveratrol; nutraceutical
►▼ Show Figures 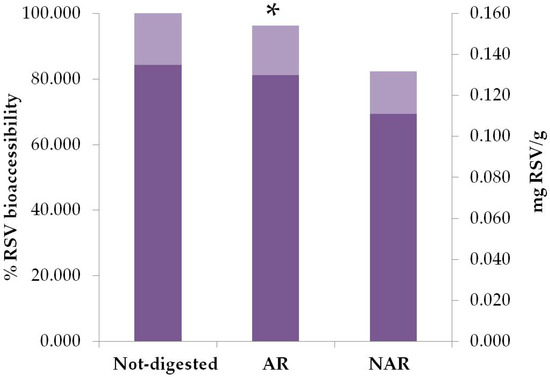