Pyruvate is a normal constituent of the body that participates in carbohydrate metabolism and functions as a scavenger of free radicals. Calcium pyruvate monohydrate (CPM) is a more stable derivative that has proved its anti-inflammatory effect in experimental colitis, among other disorders, and that could also be considered a source of calcium. Thus, it would be useful for the treatment of diseases with an inflammatory component and a high prevalence of osteoporosis like the irritable bowel syndrome (IBS). The aim of the present study is to evaluate the effects of CPM in a rat model of chronic post-inflammatory visceral pain induced by deoxycholic acid (DCA) that resembles IBS. Rats were administered DCA for three days intracolonically and then treated daily with CPM (40 and 100 mg/kg) or gabapentin (70 mg/kg) (positive control) by oral gavage for 17 days. The treatments reduced the visceral hypersensitivity measured by response to colorectal distension and referred pain. DCA induced changes in the colonic immune response characterized by increased expression of the cytokine Il-1β and the inducible enzyme Cox-2, which was reduced by the treatments. DCA also decreased the gut expression of the mucins Muc-2 and Muc-3, which was normalized by CPM, whereas gabapentin only increased significantly Muc-3. Moreover, DCA increased the expression of Tlr3, which was decreased to basal levels by all the treatments. However, the serotonin receptor Htr-4, which was also elevated, was not affected by any of the treatments, indicating no effect through this signalling pathway. In conclusion, CPM ameliorated the visceral hypersensitivity and the referred pain caused by DCA, being as effective as the control drug. Furthermore, it improved the immune status of the animals, which could contribute to the visceral analgesia and the regeneration of the intestinal epithelial barrier integrity. View Full-Text
Keywords: calcium pyruvate; irritable bowel disease; deoxycholic acid; colorectal distension; referred pain calcium pyruvate; irritable bowel disease; deoxycholic acid; colorectal distension; referred pain
►▼ Show Figures 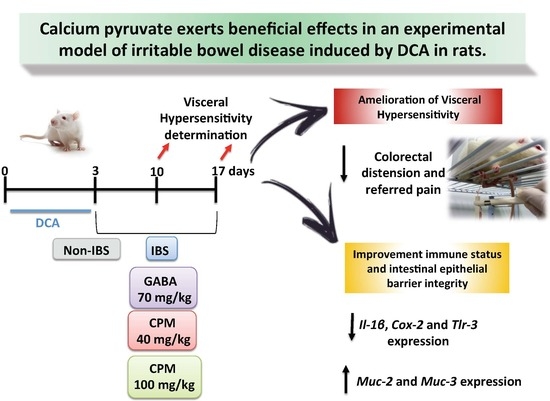