The Dirt on Clean Eating: A Cross Sectional Analysis of Dietary Intake, Restrained Eating and Opinions about Clean Eating among Women
Previous Article in Journal

:
Low- and no-calorie sweeteners (LNCS), intensely sweet compounds that virtually contain no calories, are used to replace added sugars in food and drinks. Knowledge about different LNCS data in Spanish foods and added sugar sources in Spain is limited, therefore our aim was to identify and compare their presence across main food groups consumed. Food and beverage products (n = 434) were obtained from the ANIBES Study (anthropometric data, macronutrients and micronutrients intake, practice of physical activity, socioeconomic data and lifestyles), a cross-sectional study of a representative sample of the Spanish population (9–75 years old; n = 2009) carried out in 2013. Food records were obtained from a three-day dietary record using a tablet device. Label data from 1,164 products of different brands were collected and reviewed for content of added sugars and LNCS. LNCS were present in diet soft drinks (100%), “other sweets” (89%), soya drinks (45%), and yogurt and fermented milks (18%). Added sugars were present mainly in sugar soft drinks (100%), energy drinks (96%), sports drinks (96%), bakery and pastry (100%), chocolates (100%), ice cream (100%), breakfast cereals/bars (96%) and jams (89%). Main LNCS were acesulfame K, aspartame, cyclamate and sucralose. Sucrose, dextrose, glucose-fructose syrup, caramel and honey were the main added sugars. Our results show the diversity of foods groups including these ingredients. These data are not compiled in food composition databases, which should be periodically updated to include LNCS and added sugars to facilitate their assessment and monitoring in nutritional surveys.
Keywords:
added sugars; low- and no-calorie sweeteners; additives; food groups; processed foods; Spanish population

The complete design, protocol, and methodology of the ANIBES study have been described in detail elsewhere [6]. In summary, the final sample of the study (n = 2009 individuals) presented an error of ±2.23% with a margin of confidence of 95.5% (1,013 men, 50.4%; 996 women, 49.6%; 2.23%). In addition, for the youngest groups (9–12, 13–17, and 18–24 years old), a boost was considered to at least n = 200 per age group, which increased the statistical power of the study (6.9% error) (Figure 1). The random sample was used to show total sample data and to compare between sexes; a booster sample was used to compare age groups and sex in age groups. Sample quotas according to the following variables were: age groups, sex, geographical distribution and locality size. The final fieldwork was carried out from mid-September to November (three months) 2013.

Study participants were provided with a tablet device (Samsung Galaxy Tab 27.0, Samsung Electronics; Suwon, Gyeonggi-do, Korea) to record, by writing descriptions and taking photographs, all food and drinks consumed for three days, both at home and outside, before and after each meal. Additionally, a brief description of the meals, recipes, brands, etc. could be included. Each participant completed a three-day food diary including one weekend day. The ANIBES in-house software was developed to receive information from the field tablets every two seconds, and the database was updated every 30 min. With the use of these photographs, and participant’s descriptions (i.e., cooking methods, type of oil, etc.), the dieticians/nutritionists codified the foods and beverages and assigned grams following three different cleanings of the data.

For each coded packaged product identified in the survey (n = 434) according to the selection of food groups of the ANIBES study [6], 2–7 food products from different brands, either traditional manufacturer’s brands or from distribution brand (supermarket own brand), were selected and photographed; being representative of at least >80% of the Spanish market, as a weighted average by sales. Photographs were taken in retail centers, such as hypermarkets, supermarkets and convenience stores by researchers, and comprised at least one, and up to four different shots to obtain precise information about packaging, company, brand, nutritional labeling and readable ingredient lists.

From the ingredients lists depicted in the photographs, LNCS and added sugar were identified. There are nineteen authorized LNCS in Europe that were identified either by name or standardized code: sorbitol (E-420), mannitol (E-412), acesulfame K (E-950), aspartame (E-951), cyclamate (E-952), isomalt (E-953), saccharine and its Sodium, Potassium and Calcium salts (E-954), sucralose (E-955), thaumatin (E-957), neohesperidine DC (E-959), steviol glycosides or “stevia” (E-960), neotame (E-961), salt of aspartame-acesulfame (E-962), polyglycitol syrup (E-964), maltitols (E-965), lactitol (E-966), xylitol (E-967), erythritol (E-968) and advantame (E-969) [10,11]. In addition, added sugars were identified by the ingredient’s names that, in accordance to Regulation 1169/2011 of the European parliament and of the Council of 25 October 2011 on the provision of food information to consumers [26], includes all monosaccharides and disaccharides present in food, but excludes polyols. Since the purpose of this work was also identifying added sugar sources, the following terms were searched on labels: caramel, caramelized sugar, corn dextrose, dextrose, fructose, glucose syrup, glucose-fructose syrup, honey, inverted sugar, lactose and sugar (sucrose).

2.5. Collection of Food Composition for the Database

Food products were classified into groups and subgroups according to the ANIBES study categorization [6] (Table S1) to assess their LNCS and/or added sugar distribution.
Photographs were reviewed, and information was recorded for each food product in an in-house database built in Excel® 2007 software (Microsoft Co., Redmond, Washington, DC, USA).

Data were grouped into 16 food groups, 38 subgroups, and 761 ingredients for in-depth analysis. The results show the presence of LNCS or added sugars into different food groups, independent of their LNCS or added sugar content, and the mathematical calculations were done with Excel® 2007 software (Microsoft Co., Redmond, Washington, DC, USA).

The present work shows that currently there is a widespread presence of LNCS and added sugars in many food and beverage groups commercialized in Spain. LNCS were present in diet soft drinks (100%), “other sweets” (89%), soya drinks (45%), and yogurt and fermented milks (18%). Added sugars were present in sugar soft drinks (100%), energy drinks (96%), sports drinks (96%), bakery and pastry (100%), chocolates (100%), ice cream (100%), breakfast cereals/bars (96%) and jams (89%). Main LNCS were acesulfame K, aspartame, cyclamate and sucralose. Sucrose, dextrose, glucose-fructose syrup, caramel and honey were the main added sugars.
It is relevant to identify LNCS in food and beverage products as the European regulation establishes that their consumption should be monitored and quantified in different population groups. Moreover, added sugars contents should be reduced to meet public health guidelines and key products that contain them could be monitored for reformulation as well. This is the first work conducted in Spain to identify, examine and describe the presence of added sugars and LNCS in main food groups consumed by a representative sample of our population. This information should be compiled in food composition databases to assess their consumption in nutritional surveys and monitor reformulation.

This research was funded by a grant from Coca-Cola Iberia through an agreement with the Spanish Nutrition Foundation (Fundación Española de la Nutrición (FEN).

The authors would like to thank Coca-Cola Iberia and IPSOS for its support and technical advice, particularly Rafael Urrialde and Javier Ruiz.

The study was financially supported by a grant from Coca-Cola Iberia through an agreement with the Spanish Nutrition Foundation (Fundación Española de la Nutrición (FEN)). The funding sponsor had no role in the design of the study, the collection, analysis nor interpretation of the data, the writing of the manuscript, nor in the decision to publish the results. The authors declare no conflict of interest. 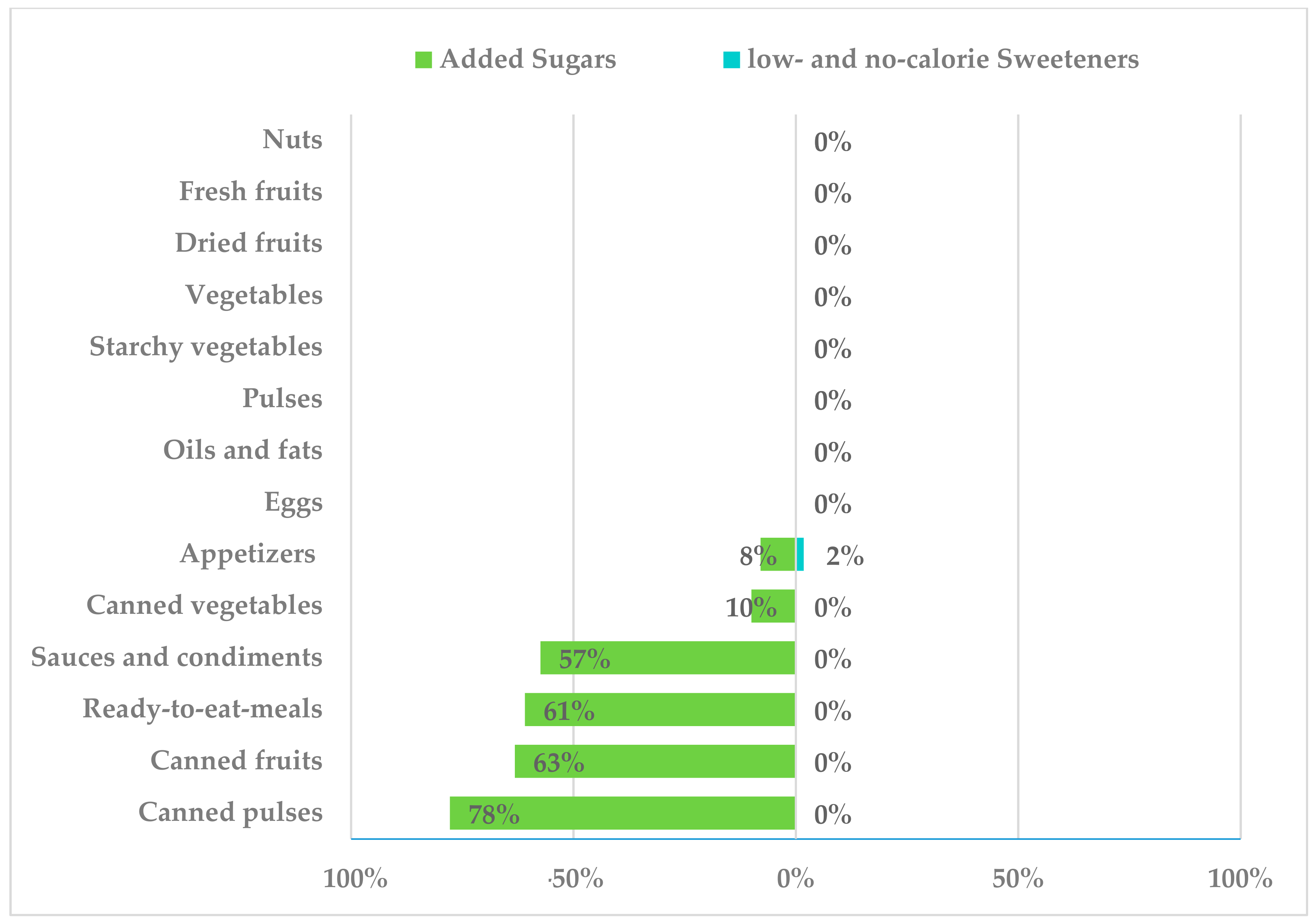