Modulation of Intestinal Immune and Barrier Functions by Vitamin A: Implications for Current Understanding of Malnutrition and Enteric Infections in Children
Previous Article in Journal

An Update on Protein, Leucine, Omega-3 Fatty Acids, and Vitamin D in the Prevention and Treatment of Sarcopenia and Functional Decline
Previous Article in Special Issue

Approaches to Assess Vitamin A Status in Settings of Inflammation: Biomarkers Reflecting Inflammation and Nutritional Determinants of Anemia (BRINDA) Project

The accurate estimation of vitamin A deficiency (VAD) is critical to informing programmatic and policy decisions that could have important public health implications. However, serum retinol and retinol binding protein (RBP) concentrations, two biomarkers often used to estimate VAD, are temporarily altered during the acute phase response, potentially overestimating the prevalence of VAD in populations with high levels of inflammation. In 22 nationally-representative surveys, we examined (1) the association between C-reactive protein (CRP) or α1-acid glycoprotein (AGP) and retinol or RBP, and (2) how different adjustment approaches for correcting for inflammation compare with one another. In preschool age children (PSC) and school age children (SAC), the association between inflammation and retinol and RBP was largely statistically significant; using the regression approach, adjustments for inflammation decreased the estimated prevalence of VAD compared to unadjusted VAD (range: −22.1 to −6.0 percentage points). In non-pregnant women of reproductive age (WRA), the association between inflammation and vitamin A biomarkers was inconsistent, precluding adjustments for inflammation. The burden of VAD can be overestimated if inflammation is not accounted for, and the regression approach provides a method for adjusting retinol and RBP for inflammation across the full range of concentrations in PSC and SAC.
Keywords: Vitamin A; inflammation; retinol; retinol binding protein; infection Vitamin A; inflammation; retinol; retinol binding protein; infection

Vitamin A deficiency (VAD) is an important public health problem worldwide, with implications for blindness and mortality, particularly in vulnerable populations of children and women [1,2]. Despite the important consequences of poor vitamin A status, its measurement in human populations is difficult. The gold standard assessment of an individual’s vitamin A status is the measurement of liver reserves, but this is not feasible in population surveys. Alternatively, serum retinol and retinol binding protein (RBP) concentrations are surrogate measures of vitamin A status commonly used in nutrition surveys [3,4]. However, both biomarkers are influenced by the presence of inflammation wherein concentrations transiently decrease during the acute phase response [5]. Therefore, the accurate estimation of VAD is difficult in contexts with high levels of inflammation.
During the inflammatory process there are rapid and large changes in the plasma concentrations of a number of nutrients used as nutritional biomarkers, including retinol and RBP [6]. In general, the metabolic changes that occur during inflammation are short-term, catabolic, and designed to inhibit and destroy the invading organisms. The production of acute phase proteins (APPs) is induced and regulated by cytokines. C-reactive protein (CRP) and α1-acid glycoprotein (AGP), two commonly measured APPs, are enhanced by the cytokines interleukin-6, interleukin-1, and tumor necrosis factor [7]. The time course of the APPs is related to their functions. There is an early rise in CRP (4–6 hours) concentrations, which respond acutely to the inflammatory stimulus with a much slower and longer response by AGP [8,9]. The acute phase response has a transient negative influence on retinol and RBP mainly because RBP is itself a negative APP [5], but also due to other factors [10]. A study by Louw et al. in healthy young adults who underwent uncomplicated orthopedic surgery found a significant transient decrease in blood concentrations of retinol and RBP, in addition to other nutritional biomarkers, corresponding with the acute phase response as monitored by CRP [11]. Specifically, plasma concentrations of RBP and retinol decreased significantly by 48 hours and corresponded with the changes in CRP. Concentrations returned to pre-operation levels after seven days. The transient decreases in vitamin A biomarkers can lead to overestimation of the prevalence of deficiency in populations with high levels of inflammation, resulting in estimates that are not reflective of the actual vitamin A status of the population. Yet to date, there are no universally accepted approaches to adjusting retinol and RBP for inflammation.
In response to this identified need, the Biomarkers Reflecting Inflammation and Nutritional Determinants of Anemia (BRINDA) project was formed in 2012 to analyze pooled data from population-based nutrition surveys and answer priority research questions around the assessment of nutritional biomarkers in settings of inflammation [12]. The current analysis builds on a previously published report from the BRINDA project examining effects of inflammation on RBP [13] and aims to summarize approaches to correct for inflammation when estimating VAD in children and women using both retinol and RBP. The focus of this paper is (1) to explore the associations between biomarkers of inflammation (CRP and AGP) and retinol and RBP in preschool age children (PSC), school age children (SAC) and non-pregnant women of reproductive age (WRA), and (2) to determine how different adjustment approaches for correcting for inflammation and for calculating the estimated prevalence of VAD compare with one another. This paper updates the previous BRINDA analyses by adding data from fourteen more surveys, by examining the associations between inflammation and retinol, and by examining the associations between inflammation, retinol, and RBP in a new population group, SAC.

The methods of the BRINDA project have previously been reported [14]. Briefly, surveys included in these analyses were nationally or regionally representative nutrition surveys that met the following inclusion criteria: (1) surveys were conducted after 2004, (2) target groups included PSC aged 6–59 months, SAC aged 5–15 years, or non-pregnant WRA aged 15–49 years, and (3) surveys measured retinol or retinol binding protein and one or more markers of inflammation (AGP and/or CRP). Data from 20 PSC, 6 SAC, and 14 WRA surveys were available for the present analysis.
Venous or capillary blood was collected from children and women, and plasma or serum was stored at −20 °C until analysis. Retinol was measured by high performance liquid chromatography and RBP by sandwich enzyme-linked immunosorbent assay (ELISA) [15]. CRP and AGP concentrations were assessed using sandwich ELISA in Bangladesh, Cambodia, Cameroon, Côte d’Ivoire, Kenya, Laos, Liberia, Papua New Guinea, and the Philippines, and by ELISA in Azerbaijan, Malawi, and Vietnam. CRP was measured using immunoassay in Afghanistan and Pakistan, using turbidimetry in Colombia and the United States, and using nephelometry in Ecuador and Mexico. In the United Kingdom, high sensitivity CRP was measured on a Siemens/DADE automated analyzer. AGP was measured using turbidimetry in Afghanistan, Mongolia, Nigeria, Nicaragua, and Pakistan.
Consistent with previously published BRINDA work on vitamin A [13] or WHO guidance [4], RBP or retinol concentrations <0.7 μmol/L were used to define VAD, respectively. The retinol:RBP relationship was assumed to be 1:1 [4,16], as only two surveys (Malawi and Cameroon) measured retinol and RBP in a subset of the same individuals. Based on the WHO classification, a VAD prevalence of ≥20% was defined as a severe public health problem, 10–19% as moderate, and 2–9% as mild [4]. Inflammation was defined as a CRP concentration >5 mg/L and/or AGP concentration >1 g/L [15,17].
All statistics were calculated with the use of SAS 9.4 software (SAS Institute, Cary, NC, USA). Correlations between RBP, retinol, CRP, and AGP concentrations were calculated using Spearman’s coefficient. The Taylor linearization method was used to obtain unbiased estimates that incorporated the sampling weight, strata, and cluster (as applicable) when analyzing individual surveys. The prevalence of VAD was estimated without any adjustments to retinol or RBP and is referred to as an unadjusted estimate. Adjustments for inflammation were made in PSC and SAC only because associations between retinol or RBP and CRP or AGP in WRA were inconsistent and often not significant. The following three approaches, explained in detail elsewhere [14], were used to adjust retinol and RBP for inflammation: exclusion, Correction Factor (CF), and regression correction (RC). The exclusion approach excluded observations that had elevated CRP or AGP concentrations, and the prevalence of estimated VAD was calculated with the remaining individuals. CFs were calculated based on internal survey-specific data [termed the Internal CF (ICF)] using a 4-group inflammation adjustment model of a reference (both CRP ≤ 5 mg/L and AGP ≤ 1 g/L), incubation (CRP > 5 mg/L and AGP ≤ 1 g/L), early convalescence (both CRP > 5 mg/L and AGP > 1 g/L), and late convalescence (CRP ≤ 5 mg/L and AGP > 1 g/L) similar to Thurnham et al.’s method [17]. ICFs were applied to individuals’ retinol and RBP concentrations based on their phase of inflammation. The RC approach uses linear regression to adjust retinol and RBP by the concentration of CRP and/or AGP on a continuous scale using internal survey-specific data [termed the Internal RC (IRC)]. Briefly, the adjusted retinol (or RBP) equation was calculated by subtracting the influence of CRP and AGP as follows:
Retinoladjusted = retinolunadjusted − β1(CRPobs − CRPref) − β2(AGPobs − AGPref)
Depending on available data, CRP and/or AGP can be included in the model. β1 is the CRP regression coefficient and β2 is the AGP regression coefficient, obs is the observed value, and ref is the reference value (maximum value of the lowest CRP or AGP decile using either (1) the combined BRINDA data [14] reference values of CRP = 0.10, AGP = 0.59 for PSC for surveys, or (2) internal survey data reference values for SAC because of the limited amount of surveys; internal reference values for Ecuador PSC were used because the CRP assay limit of detection was >0.1 mg/L. CRP, AGP, and retinol were all ln transformed. The correction was only applied to individuals with ln-CRPobs > ln-CRPref or ln-AGPobs > ln-AGPref to avoid over-adjustments [14]. Additional information on the inflammation adjustment approaches, including statistical code, can be found on the BRINDA website (www.brinda-nutrition.org).

3.2. Relation between RBP, Retinol, and Inflammation

3.3. Unadjusted prevalence of VAD in PSC, SAC, and WRA

3.4. Estimated prevalence of VAD in PSC and SAC adjusting for inflammation

In summary, associations between retinol or RBP and CRP and AGP are consistently negative in PSC and SAC, and these associations exist above and below the thresholds typically used to define inflammation. The regression approach provides a method for adjusting retinol and RBP for inflammation across the full range of concentrations, in order to estimate the prevalence of VAD in populations with varying levels of inflammation. The burden of VAD can be overestimated if inflammation is not accounted for and this finding requires additional research to validate in order to inform vitamin A programs.

This research was funded by the Bill & Melinda Gates Foundation and the CDC. 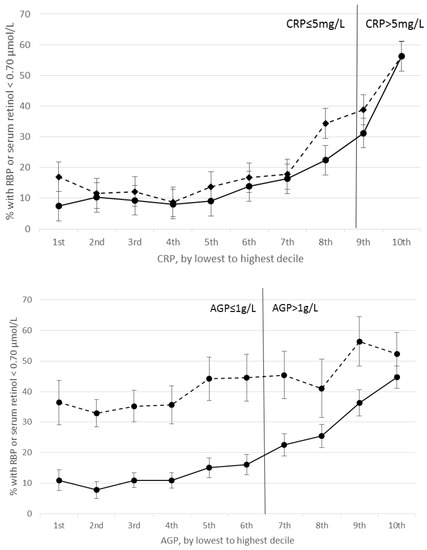 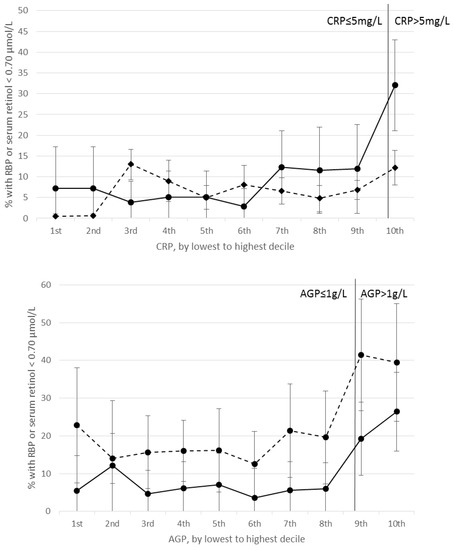 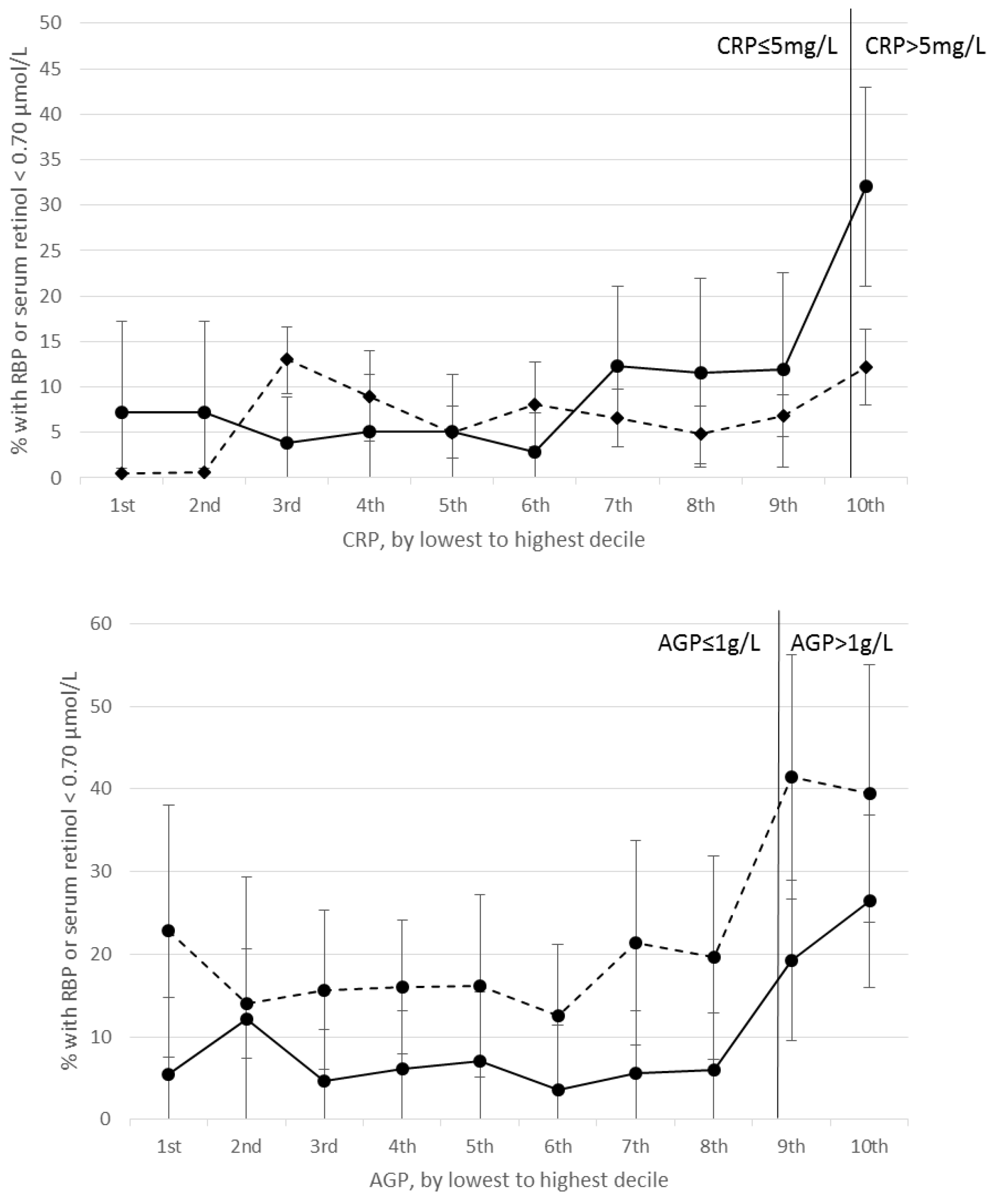