The composition of the gut microbiota can be influenced by dietary composition. In pregnancy, the maternal gut microbiome has associations with maternal and infant metabolic status. There is little known regarding the impact of a vegetarian diet in pregnancy on maternal gut microbiota. This study explored the gut microbiota profile in women who were vegetarian or omnivorous in early gestation. Women were selected from participants in the Study of PRobiotics IN Gestational diabetes (SPRING) randomised controlled trial. Nine women identified as vegetarians were matched to omnivorous women in a 1:2 ratio. Microbiota analyses were performed using 16S rRNA gene amplicon sequencing and analysed using the Quantitative Insights Into Microbial Ecology (QIIME) and Calypso software tools. There was no difference in alpha diversity, but beta diversity was slightly reduced in vegetarians. There were differences seen in the relative abundance of several genera in those on a vegetarian diet, specifically a reduction in Collinsella, Holdemania, and increases in the relative abundances of Roseburia and Lachnospiraceae. In this sub-analysis of gut microbiota from women in early pregnancy, a vegetarian as compared to omnivorous diet, was associated with a different gut microbiome, with features suggesting alterations in fermentation end products from a mixed acid fermentation towards more acetate/butyrate.
Keywords: microbiota; pregnancy; vegetarian microbiota; pregnancy; vegetarian

The composition of the gut microbiota has been associated with host metabolic status and health and is affected by dietary composition [1]. The impact of vegetarian diets on the gut microbiota in adults has been examined in observational and interventional trials. In a cross-sectional study of 101 adults in Italy, greater richness, and increased abundance of the phylum Bacteroidetes was observed in the vegetarian compared to vegan and omnivore groups [2]. Another cross-sectional cohort examined 268 non-diabetic participants who were strict vegetarians, lacto-ovo vegetarians and omnivores [3]. The abundance of the phylum Firmicutes was lower and Bacteroidetes was higher in strict vegetarians, with the genus Prevotella being increased amongst other changes [3]. A prospective study addressed the changes in response to the adoption of a lacto-ovo-vegetarian diet for three months in a group of 15 omnivores, in comparison to continuous omnivores (n = 7) and long term vegetarians (n = 7) [4]. Adoption of a vegetarian diet did not change individual diversity of the gut microbiota (alpha diversity) but caused a decrease in the diversity (beta diversity) in the group of people who changed to a vegetarian diet. In addition, increases in the abundance of the genera Roseburia and Ruminococcus, which are known to be involved in digestion of plant polysaccharides, were observed. Those individuals who adhered to a long term vegetarian diet also showed enrichment in the genera Haemophilus, Neisseria, Aggregatibacter, and Veillonella [4].
Plant-based diets are thought to be beneficial in the prevention and control of type 2 diabetes and in reducing cardiovascular risk factors [5]. There is limited evidence that this may be mediated in part through modulation of gut microbiota. When 6 obese participants with type 2 diabetes (n = 4) and/or hypertension (n = 2) were assigned to a vegetarian diet for 1 month, a reduction in body weight, and improvement in metabolic markers was observed. There was also a reduction in the Firmicutes to Bacteroidetes ratio in the gut microbiota, with decrease in Enterobacteriaceae and increase in Clostridium species and Bacteroides fragilis [6].
The composition of the gut microbiota is generally reported to be affected by pregnancy [7]. There are no studies the authors are aware of that have investigated the composition of the gut microbiota in women maintaining a vegetarian diet during pregnancy. This cohort from the Study of PRobiotics IN Gestational diabetes (SPRING) [8] randomised controlled trial supplementing overweight or obese women with a probiotic offers the opportunity to examine the microbiota of women in early pregnancy, prior to supplementation. The analysis described below aims to analyse the association between dietary patterns on maternal gut microbiota in early pregnancy in this well characterised cohort with detailed dietary and metabolic data.

Women were selected from participants in the Study of PRobiotics IN Gestational diabetes (SPRING; ANZCTR 12611001208998) randomised controlled trial [8] who completed the food frequency questionnaire and supplied a stool sample at baseline (<16 weeks gestation). The study was approved by the human research ethics committee of the Royal Brisbane and Women’s Hospital (HREC/11/QRBW/467) and The University of Queensland (201200080) and all participants provided informed written consent. The study enrolled only overweight or obese women. Nine women identified as vegetarians and they were matched to omnivorous women in a 1:2 ratio. The matching was performed on maternal body mass index (BMI) at baseline, total energy intake at 16 weeks gestation and the future development of gestational diabetes mellitus. Each woman completed the Victoria Cancer Council Food Frequency Questionnaire (Version DQES V2.0) with instruction to include only dietary information since the beginning of pregnancy. This dietary information was analysed for macronutrient and fatty acid content. Women also provided a self-collected stool sample, which was kept cold until storage at −80 °C prior to faecal DNA isolation. In addition, fasting blood samples; anthropometric measurements and medical and obstetric history were obtained from all participants.

The abundances of the bacteria were not normally distributed and are therefore presented as median and interquartile range (IQR). Non-parametric statistical methods were used throughout the study with a p value cut-off of <0.05 for statistical significance. The online Calypso software tool [12] was used to analyse the sample profiles, presenting primarily the results at the family and genus level of taxonomic assignments. The Chao1, Shannon, ACE, Evenness, Richness and Simpson indices were used for comparison of within sample (alpha) diversity. Between sample (beta) diversity variation was compared using the permutation multivariate analysis of variance (PERMANOVA) in the Adonis tool. Clustering of the samples was analysed by canonical correspondence analysis. Network analysis was performed to identify positive and negative correlations between bacterial taxa for both the vegetarian and omnivorous groups. Genera associated with a vegetarian or omnivorous diet were identified using Spearman’s rho correlation coefficients with 1000-fold permutations. The results are reported as significant if the false discovery rate (FDR) was <0.05, with the degree of colouring of the nodes reflecting the level of significance of association with either diet type. The size of the nodes indicates the abundance of the genus. The predicted functions of the microbiome were analysed with the PICRUSt software tool [13]. LefSe (Linear discriminant analysis (LDA) effect size) analysis was carried out to identify genera discriminating between the groups [14].

For this sub-analysis, the vegetarian group was selected from the women who supplied a faecal sample and dietary information at 16 weeks gestation. Only nine women followed a vegetarian diet. Each of these women was matched with two women who were similar in BMI, future gestational diabetes status and overall energy intake (Table 1).
This ensured that the groups were more even in size rather than comparing the vegetarian women to all omnivorous women. The overall reported energy intake was low, suggesting possible underreporting, but not different between groups. Women on a vegetarian diet had similar blood pressure and slightly higher fasting blood glucose than women on an omnivorous diet. However, their overall future gestational diabetes mellitus (GDM) rates were not different from the overall Study of PRobiotics IN Gestational diabetes (SPRING) population (11.1% vs. 15.3%, p = 1). Women eating a vegetarian diet had significantly lower intake of protein, sugars and saturated fat but higher intake of polyunsaturated fat (PUFA) (Table 2). They also had higher levels of dietary linoleic acid (ω-6), and lower levels of arachidonic acid, eicosapentaenoic acid (EPA) and docosahexaenoic acid (DHA).

While there was no significant differences between the groups in terms of their alpha (within sample) diversity metrics for any of the indices analysed at phylum (Figure S1), genus (Shannon, p = 0.56, Figure 1A and Figure S2) and OTU level (Figure S3), the beta diversity between groups was significantly different at genus and OTU level but not at phylum (genus level R = 0.16; p = 0.046, Figure 1B; OTU level R = 0.17; p = 0.041, Figure S4A) as was the canonical correspondence analysis of these profiles (genus level p = 0.021, Figure 1C; OTU level p = 0.017, Figure S4B).
When comparing the composition of the gut microbiota between the groups, there were no differences in abundance at phylum level. At genus level, women consuming a vegetarian diet possessed significantly lower abundances of Collinsella (p = 0.0059), Holdemania (p = 0.025), Unclassified S247 (p = 0.039), and Eubacterium (p = 0.041), but had significantly higher relative abundances of Roseburia (p = 0.0064) and Unclassified Lachnospiraceae (p = 0.0087) and the relative abundances of Clostridium and Acidaminococcus approached statistical significance (p = 0.060 and p = 0.061, respectively, Figure 2A). Similarly, the LEfSe analysis identified the genera Roseburia, Clostridium, Uncl. Lachnospiraceae and Holdemania as biomarker genera for a vegetarian diet whereas Collinsella, Eubacterium and Uncl. S247 as biomarker genera for an omnivorous diet (Figure 2B). These results were in line with the comparisons at family (Figure S5) and OTU level (Figures S6 and S7), which also indicate that members of these genera are altered in a similar direction by a vegetarian diet.

Network analyses were performed to investigate if diet type altered the overall composition of the gut microbiota. A vegetarian diet in early pregnancy was associated with increased abundance of Holdemania, Roseburia, Acidaminococcus, Uncl. Lachnospiraceae, Uncl. Erysipelotrichaceae and Parabacteroides. In contrast, an omnivorous diet in early pregnancy is associated with increased abundance of Collinsella, Uncl. S247, Ruminococcus, and Uncl Christensenellaceae (Figure 3). The relative brightness of the nodes indicates the significance level of their association, highlighting the importance of Roseburia, Holdemania and Uncl. Lachnospiraceae in the vegetarian group and that of Collinsella in the omnivorous group.

Predicted biosynthesis function analyses (Figure 4) suggested that microbiota associated with biosynthesis pathways for fatty acids, lipids, folate amongst others were more pronounced in those on vegetarian diet.

The SPRING study has received probiotics and placebo products from Chr. Hansen A/S. The authors have no further conflicts of interest. 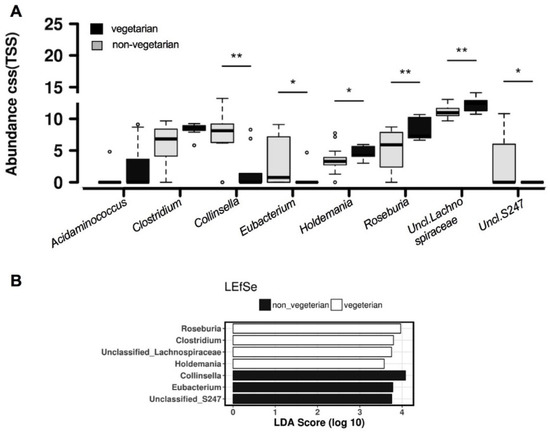 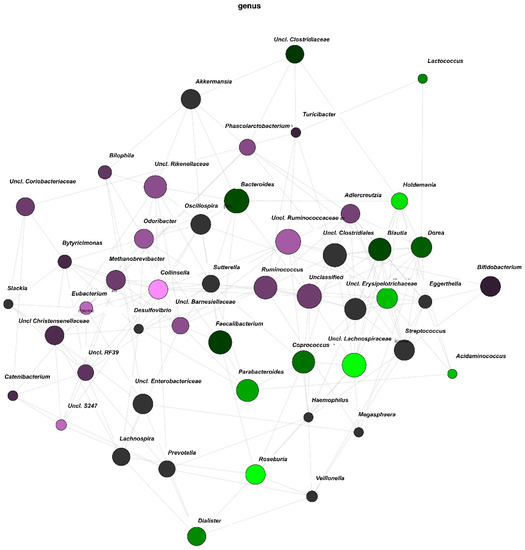