Alcohol is primarily metabolized in liver, and excess alcohol consumption can induce liver damage [1]. It has been demonstrated that alcohol-induced liver injury is one of the leading causes of alcohol-related death, which is characterized by progressive damage of the liver from fibrosis to cirrhosis [2,3]. Acute alcohol consumption leads to elevation of liver function enzymes, acute liver inflammation and metabolism disorders including hyperlactacidemia, hyperuricemia, enhanced lipogenesis and depressed lipid oxidation [4,5]. However, chronic alcohol exposure induces continuous and progressive inflammation and lipid metabolism disorders, which cause alcoholic hepatitis, fibrosis, cirrhosis and even hepatocarcinoma [6].
Several studies have revealed that oxidative stress and inflammation play important roles in the pathogenesis of acute or chronic alcohol-induced liver injury [7,8]. Alcohol consumption can cause over production of reaction oxygen species (ROS). On the one hand, excess ROS induces the depletion of enzymatic and non-enzymatic antioxidants, resulting in oxidative stress in the liver [9]. On the other hand, excess ROS also induces formation of lipid radicals and accumulation of lipid in hepatocytes, which lead to lipid peroxidation [10]. Additionally, alcohol accumulation destroys the integrity of hepatocyte membrane and promotes the release of hepatic enzymes, such as alanine aminotransferase (ALT) and aspartate aminotransferase (AST) [11]. Alcohol consumption also disrupts intestinal barrier functions and causes bacterial endotoxin (lipopolysaccharide, LPS) to permeate into the systemic circulation, which induces inflammation [12]. Toll-like receptor 4 (TLR4), a receptor of LPS in Kupffer cells, induces the activation of the nuclear factor-kappa B (NF-κB). It can up-regulate the expressions of pro-inflammatory enzymes, such as inducible nitric oxide synthase (iNOS) and cyclooxygenase-2 (COX-2), subsequently increase the production of pro-inflammatory cytokines [13,14]. Therefore, preventing oxidative stress and inflammation would be effective in delaying the pathogenesis of alcoholic liver injury.
It has been reported that many natural substances are rich in antioxidant ingredients and exhibit high antioxidant capability [15]. These natural antioxidants are beneficial to human body because they can scavenge free radicals and act as reductants [16,17,18]. Arteel et al. found that green tea contained antioxidant polyphenoly and exhibited hepatoprotective effects against alcohol-induced liver injury in vivo [19]. Vinegars are natural and fermented foods, which have antioxidant ingredients [20]. Their antioxidant capability is associated with phenols, flavonoids and melanoidins produced by its raw materials and microbiological actions [21]. Several studies have demonstrated that vinegars possess a variety of physiological functions, including anti-oxidation, anti-inflammation and anti-obesity [22,23]. Chou et al. reported that black vinegar exhibited lipid-lowering and antioxidant effects on high-fat and cholesterol-diet fed hamsters [24]. Shanxi aged vinegar, as a traditional Chinese vinegar, is produced by solid-state fermentation techniques [25]. Our previous study demonstrated that SAV exhibited high antioxidant capacity and protected hepatocytes against oxidative damage in vitro [26]. However, the effects of SAV against alcohol-induced liver injury in vivo remain unclear.
The aim of our present study was to explore the possible protective effects of SAV on acute alcoholic liver injury by detecting oxidative stress indicators and inflammatory markers in mice. Then, the potential molecular mechanisms of SAV were investigated by examining antioxidant and inflammatory signal pathways. These findings would elucidate the underlying protective mechanisms of SAV on alcohol-induced acute liver injury.

Experimental animals were purchased from Beijing Vital River Laboratory Animal Technology Co., Ltd. (Beijing, China). The animal experiments were executed according to the guidelines of the institutional animal ethics committee, and supported by the institutional animal committee of Nankai University. Male ICR (6–8 weeks old) rats were housed five per cage. Seventy rats were randomly assigned to seven groups, i.e., control group, ethanol group, alcohol + SAV (0.625, 1.250 and 2.500 mL/kg b.w., 14 days) groups, alcohol + SAV (2.500 mL/kg b.w., 1 day) group, and acetic acid (AA) group (2.500 mL/kg b.w.). Control and ethanol group were only treated with distilled water for 14 days. Three SAV groups were subjected to oral treatments once daily for 14 days by oral gavage, and AA group were treated with synthetic vinegar (2.500 mL/kg b.w.). At day 14, alcohol + SAV (2.500 mL/kg b.w., 1 day) group was treated with SAV (2.500 mL/kg b.w.) by oral gavage. Except for those in normal control group, mice were given by gavage with an ethanol solution (50% w/v, 4.8 g/kg b.w.) 2 h after final administration. All the mice were euthanized after 12 h, blood and liver tissues were harvested and stored at −80 °C.

Fixed liver tissues were embedded in paraffin wax and cut in 5-μm-thick pieces. Paraffin portions were stained with hematoxylin-eosin (H & E) for histopathological examination according to a standard protocol. It has been reported that level of liver steatosis was graded as 0 point for no hepatocytes affected, 0.5 point for slight (0–5%), 1 point for mild (5–20%), 2 points for moderate (20–50%), and 3 points for severe (>50%) [27,28]. Oil Red O staining was used to determine hepatic fat visualization. Briefly, liver sections were embedded in a frozen tissue matrix, and then cut into 8 μm thin sections and stained with Oil Red O (Sigma-Aldrich) [29]. The stained sections were observed by light microscopy (Nikon, Tokyo, Japan).

ALT, AST, and triglyceride (TG) assay kits were obtained from Nanjing Jiancheng Bioengineering Institute (Nanjing, China). The activities of serum ALT, AST, and TG levels in serum and liver were measured according to the commercial assay kits.

Total proteins in liver cells were extracted using RIPA buffer with 1% phenylmethanesulfonyl fluoride (PMSF), and protein concentration was detected using a BCA protein assay kit. Equal amounts of protein (60 µg) were diluted in SDS-sample buffer and were separated by 12% sodium dodecyl sulphate–polyacrylamide (SDS-PAGE) gel. After electrophoresis, the proteins were subsequently blotted onto a polyvinylidene fluoride (PVDF) membrane (Millipore, Billerica, MA, USA). Then, the membranes were blocked with 5% non-fat milk in TBST buffer for 1 h at room temperature, and then incubated with primary antibodies specific for Nrf2, NQO1, HO-1, GCLM, TLR4, MyD88, p-IκB α, p-NF-κB p65, (Abcam Ltd., Cambridge, UK) at 4 °C for overnight. After washing with TBST for three times, the membranes were incubated with HRP-conjugated secondary antibodies for 1 h at room temperature and the immunoreactive bands were detected using an enhanced chemiluminescence (ECL, Thermo Scientific, Vantaa, Finland) [26]. Each membrane was stripped and re-probed with GAPDH antibody (Bioworld Tech., Nanjing, China) to ensure equal protein loading.

All results were presented as means ± standard error of the mean (SEM). Comparisons among all groups were performed with one-way analysis of variance (ANOVA) test. Significant differences were calculated according to the Bonferroni post hoc test. A difference was considered to be statistically significant at the level of p < 0.05.

It is well known that excess alcohol consumption leads to hepatic oxidative stress, which is characterized by an imbalance between oxidants and antioxidant systems [30]. Furthermore, hepatic oxidative stress can promote the development of alcohol-induced liver injury [31]. In order to evaluate the effect of SAV on alcohol-induced oxidative stress, ROS level, lipid peroxidation and antioxidant enzyme activities were examined. As shown in Table 1, hepatic levels of ROS and MDA in alcohol-treated group were significantly higher than those in the control group. However, these elevated levels were significantly reduced by SAV pretreatment at a dose of 1.250 mL/kg b.w.and 2.500 mL/kg b.w. In addition, the activities of GSH-Px, SOD and CAT were significantly decreased in the alcohol treatment group. However, the decrease of these enzymes were restored by SAV pretreatment in a dose-dependent manner, especially at a dose of 2.500 mL/kg b.w. (p < 0.01). There were no significant differences in levels of ROS and MDA and activities of antioxidant enzymes between the AA group and the alcohol-treated group in mice livers. These results suggest that SAV can attenuate alcohol-induced oxidative stress via reducing ROS and MDA production and improving antioxidant capacity.

To further explore the antioxidant mechanism underlying the protective effects of SAV on alcohol-induced oxidative damage, the expressions of Nrf2 and its downstream proteins were analyzed by western blot analysis. Nrf2, a transcription factor, is essential for encoding antioxidant proteins in response to oxidative stress [32]. It promotes the transcription of several anti-oxidative genes, including HO-1, NQO1 and GCLM [33]. As shown in Figure 3A,B, alcohol exposure remarkably down-regulated Nrf2 expression, which was restored by pretreated with SAV. Then, the expressions of its downstream proteins NQO1, HO-1 and GCLM were examined. As shown in Figure 3A,C–E, the expressions of NQO1, HO-1 and GCLM in alcohol-treated group were decreased compared with the control group. However, SAV pretreatment significantly restored the expressions of these proteins compared with the alcohol-treated group. In general, these results suggest that the hepatoprotective effect of SAV against alcohol-induced oxidative damage is associated with activation of the Nrf2-mediated antioxidant response.

3.5. Effect of SAV on Alcohol-Induced Inflammation

To explore the anti-inflammatory mechanisms underlying the protective effects of SAV on alcohol-induced liver injury, the expressions of protein related to TLR4-induced signal pathway were analyzed by western blot. It is well known that TLR4, a receptor for LPS, would be activated by alcohol consumption [36]. As shown in Figure 5A,B, TLR4 expression was significantly up-regulated after alcohol exposure compared with the vehicle control. However, this elevation was suppressed by SAV pretreatment. MyD88, a major adaptor protein of TLR4, initiates the downstream signal cascade, inducing the activation of inflammatory responses [37]. As shown in Figure 5A,C–E, the expressions of MyD88, p-IκB α and p-NF-κB p65 were significantly up-regulated after ethanol exposure compared with the control group. However, the up-regulated proteins were inhibited by SAV pretreatment. Collectively, the results imply that SAV alleviates alcohol-induced liver inflammation via inhibition of TLR4-induced signal pathway.

In conclusion, this study revealed that SAV effectively protected against alcohol-induced liver injury in mice. The protective effects were associated with reduction of alcohol-induced oxidative stress via inhibiting oxidant production and up-regulating Nrf2-mediated antioxidant response. Additionally, SAV also prevented alcohol-induced hepatic inflammation via suppressing TLR4-induced signal pathway. These findings imply that SAV is a functional food for liver protection, which would be useful for encouraging the future application and development of new health-care food.

The authors have declared no conflict of interest. 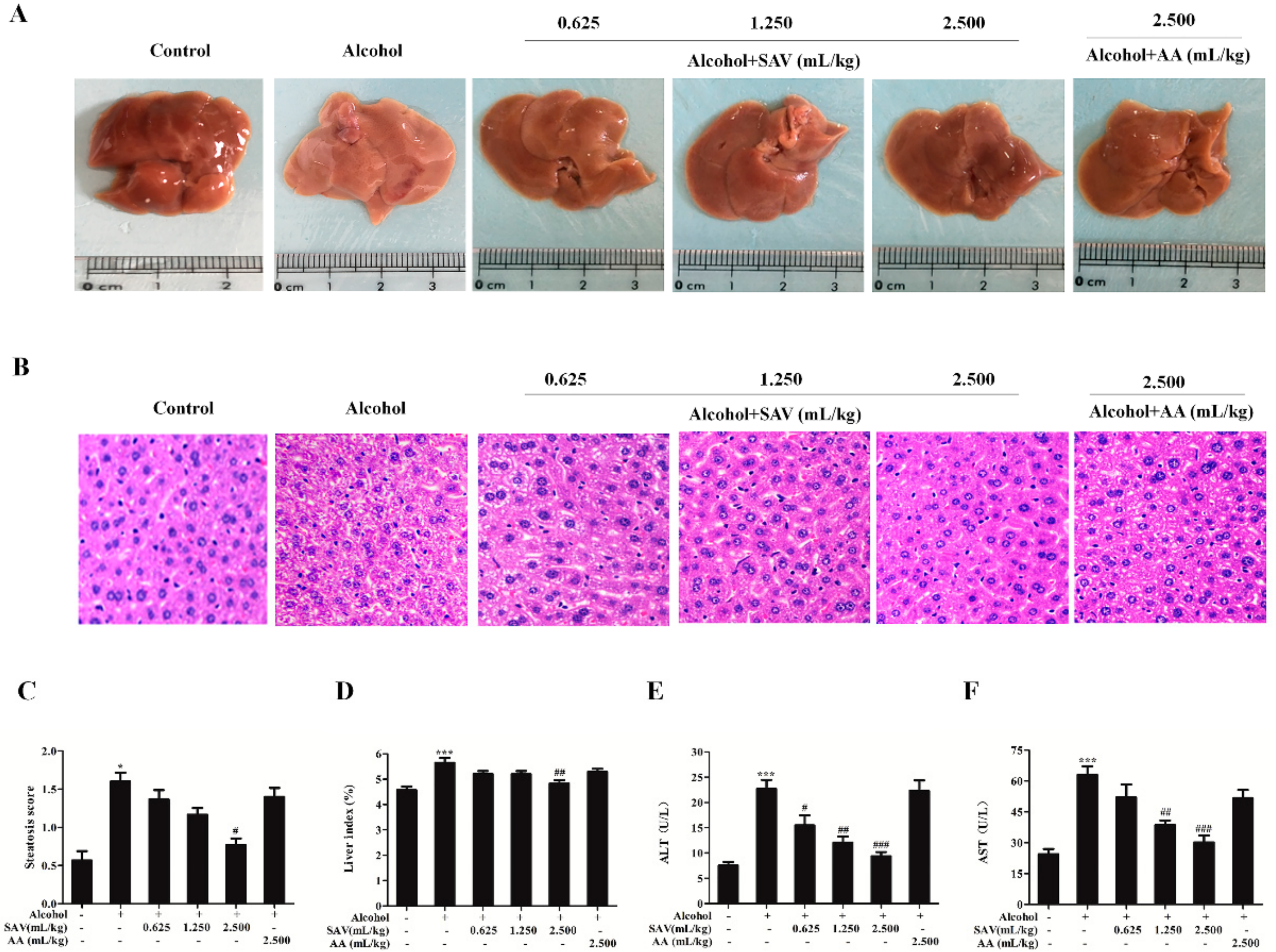 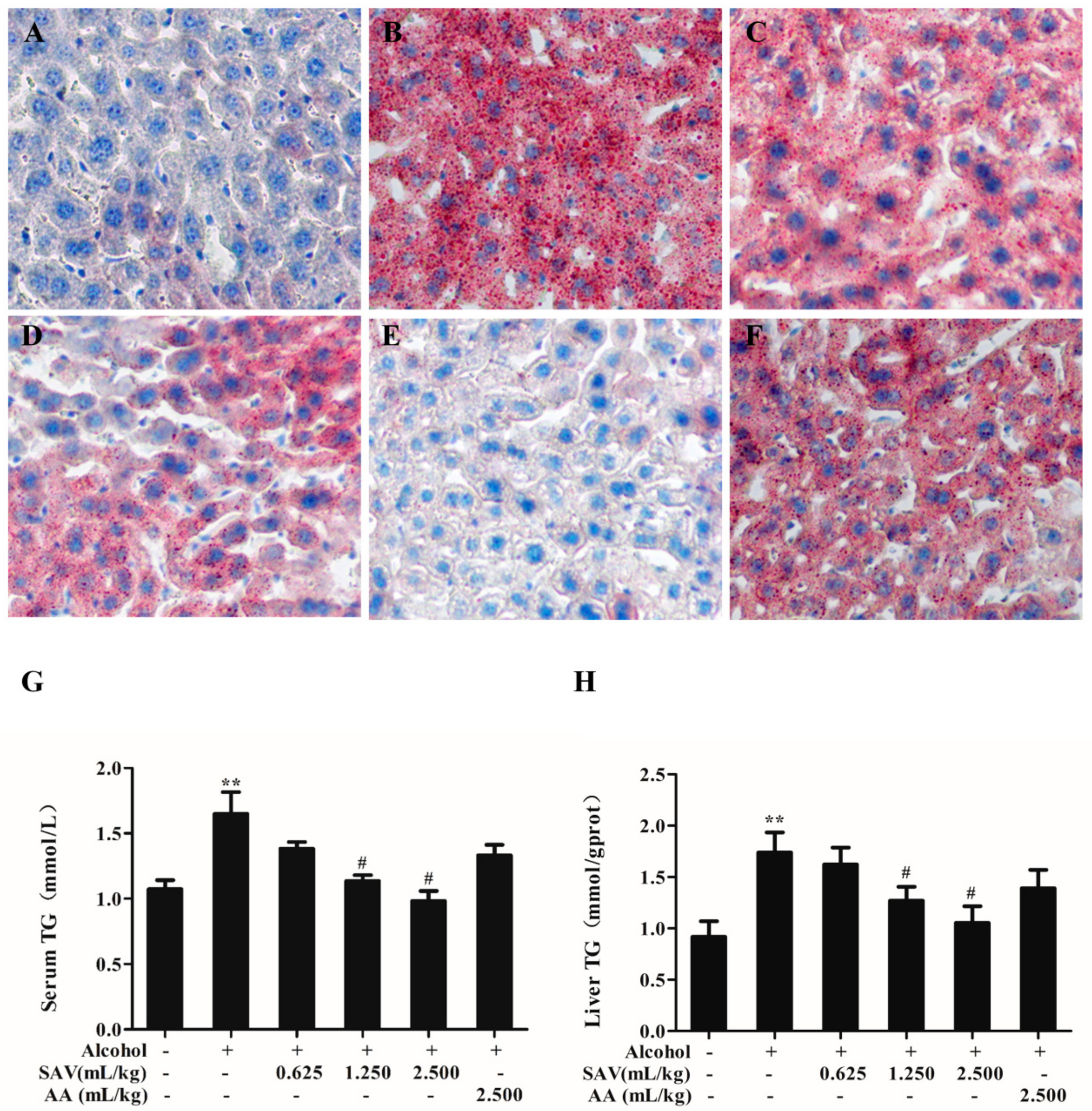 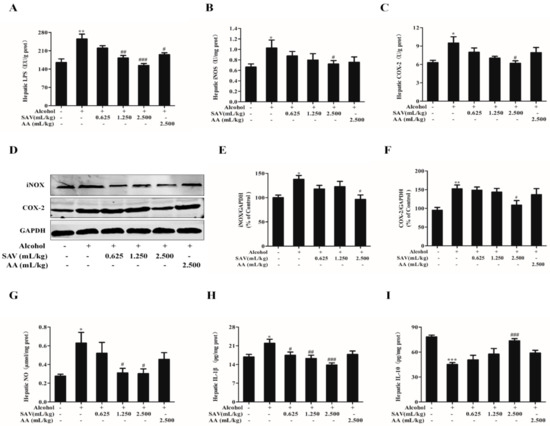 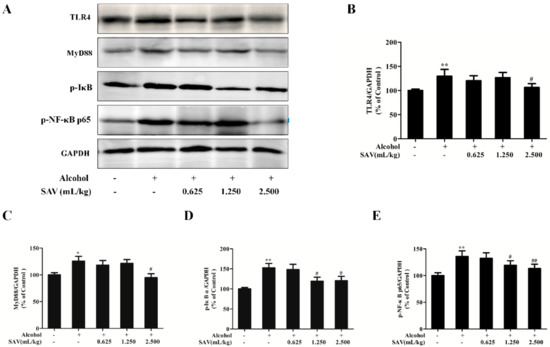