Associations of Diet and Physical Activity with Risk for Gestational Diabetes Mellitus: A Systematic Review and Meta-Analysis
Next Article in Special Issue

Differences over 12 Years in Food Portion Size and Association with Excess Body Weight in the City of São Paulo, Brazil
Previous Article in Special Issue

Jan Jeszka
1
1
Institute of Human Nutrition and Dietetics, Poznan University of Life Sciences, 60-624 Poznań, Poland
2
Polish Wrestling Federation, 00-871 Warsaw, Poland
3
Department of Biochemistry, University School of Physical Education in Poznan, 61-871 Poznań, Poland
4
Department of Mathematical and Statistical Methods, Poznań University of Life Sciences, 60-637 Poznań, Poland
5
Department of Biochemistry and Human Nutrition, Pomeranian Medical University, 71-460 Szczecin, Poland
*
Author to whom correspondence should be addressed.
†
Availability of Data and Material: The datasets used and/or analyzed during the current study are available from the corresponding author on request.
Nutrients 2018, 10(6), 697; https://doi.org/10.3390/nu10060697
Received: 11 April 2018 / Revised: 11 May 2018 / Accepted: 28 May 2018 / Published: 30 May 2018
(This article belongs to the Special Issue Advances in Sport and Performance Nutrition)

Gastrointestinal side effects are the main problem with sodium bicarbonate (SB) use in sports. Therefore, our study assessed the effect of a new SB loading regimen on anaerobic capacity and wrestling performance. Fifty-eight wrestlers were randomized to either a progressive-dose regimen of up to 100 mg∙kg−1 of SB or a placebo for 10 days. Before and after treatment, athletes completed an exercise protocol that comprised, in sequence, the first Wingate, dummy throw, and second Wingate tests. Blood samples were taken pre- and post-exercise. No gastrointestinal side effects were reported during the study. After SB treatment, there were no significant improvements in the outcomes of the Wingate and dummy throw tests. The only index that significantly improved with SB, compared to the placebo (p = 0.0142), was the time-to-peak power in the second Wingate test, which decreased from 3.44 ± 1.98 to 2.35 ± 1.17 s. There were also no differences in blood lactate or glucose concentrations. In conclusion, although the new loading regimen eliminated gastrointestinal symptoms, the doses could have been too small to elicit additional improvements in anaerobic power and wrestling performance. However, shortening the time-to-peak power during fatigue may be particularly valuable and is one of the variables contributing to the final success of a combat sports athlete. View Full-Text
Keywords: alkalosis; combat sports; Wingate test; dummy test; buffering alkalosis; combat sports; Wingate test; dummy test; buffering
►▼ Show Figures 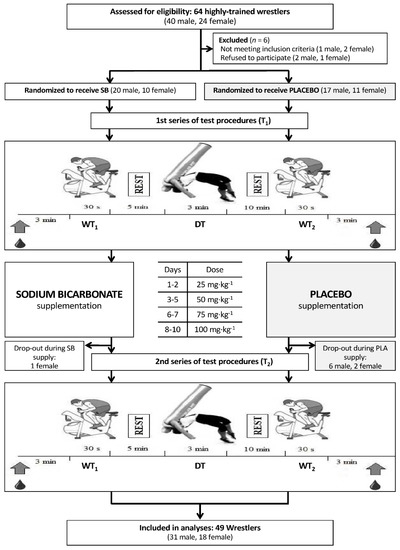