Maternal DHA Status during Pregnancy Has a Positive Impact on Infant Problem Solving: A Norwegian Prospective Observation Study
Next Article in Special Issue

The most recent dietary guidelines of the American Diabetes Association (ADA) emphasize that no single diet is suitable for all people with diabetes, and likewise there is no ideal macronutrient balance [1]. Several dietary approaches have been proposed in Western countries for people with diabetes [1,2], with guidelines recommending that individuals discuss with health professionals (physicians and dietitians) which approach would be preferable, most effective, and sustainable for them.
Recently, the Japanese Diabetes Society relaxed their dietary approach, recommending a caloric restriction of 25–35 kcal/kg ideal body weight with carbohydrates composing 50–60% of total energy consumption. No other dietary approach is currently approved by the Japanese Diabetes Society guidelines [3]. In an endeavor to make dietary approaches more flexible and sustainable for diabetes patients in Japan, in August 2009 we adopted a non-calorie restricted, moderately low-carbohydrate diet (mLCD) with the approval of the Institutional Ethical Review Board of our hospital in Tokyo, Japan. In a randomized clinical trial, we found this mLCD to be more effective than caloric restriction for glycemic and lipid profile control in patients with type 2 diabetes [4]. However, this trial was limited to six months in duration. To evaluate the long-term efficacy and safety of mLCD as a sustainable dietary therapy and to check for rebound effects (which are common in dietary studies [5]), we conducted a 36-month observational study of patients with diabetes following our mLCD.

We retrospectively enrolled 200 patients with type 2 diabetes who received outpatient treatment in Kitasato Institute Hospital, Tokyo, Japan between August 2009 and October 2016. Participants were instructed to restrict their carbohydrate intake to 20–40 g per meal and 70–130 g per day, with 10 g of carbohydrates consumed as a snack or drink at least once daily. Although we did not recommend any percentage of carbohydrate, fat, and protein to total caloric intake, it was 30:45:20 in our previous study [4]. A dietary salt restriction intervention was also performed on patients for whom it was deemed appropriate. Patients who injected insulin were recommended to monitor their capillary glucose levels frequently after mLCD was initiated.
At the first nutritional intervention and at six-month intervals thereafter, we measured the following: glycated hemoglobin (HbA1c), body weight, lipid profile (total cholesterol (TC), low-density lipoprotein cholesterol (LDL-C), high-density lipoprotein cholesterol (HDL-C), triglyceride (TG)), blood pressure (systolic blood pressure (SBP), diastolic blood pressure (DBP)), liver enzymes (aspartate aminotransferase (AST), alanine aminotransferase (ALT)), and renal function (urea nitrogen (UN), uric acid (UA), creatinine (Cr), estimated glomerular filtration rate (eGFR)). We also recorded the incidence of hypoglycemia (defined as self-monitored blood glucose levels less than 70 mg/dL, with or without hypoglycemic symptoms) for 2 months before the first intervention and for 2-month intervals during the intervention, and calculated the corresponding before/after ratios. Missing values were replaced with values obtained during the previous or following two months.
To investigate the interactions between response to the mLCD and participant baseline HbA1c level or body mass index (BMI, kg/m2), we conducted post hoc analyses. In one analysis, we classified participants according to their change in HbA1c during the 36 months of dietary intervention as follows: responder (decrease in HbA1c), unchanged (no change in HbA1c), or worsened (increase in HbA1c). In other analyses, we classified participants according to their baseline HbA1c (HbA1c < 7%, 7% ≤ HbA1c < 8%, 8% ≤ HbA1c < 9%, or 9% ≤ HbA1c) or BMI (BMI < 25, 25 ≤ BMI < 30, or 30 ≤ BMI).
Values are presented as the mean ± standard deviation (SD). Statistical analyses were performed using IBM SPSS 19 software (IBM Japan, Tokyo, Japan). We compared baseline and 36-month parameter values using the Wilcoxon signed-rank test. Multiple comparisons were made as appropriate using two-way analysis of variance (ANOVA).
This study was approved by the institutional review board of Kitasato Institution Hospital and performed in accordance with the Declaration of Helsinki. Informed consent was obtained in the form of an opt-out, by posting notices requesting that diabetes patients who had received guidance about low carbohydrate diets inform us if they did not want their records to be used for research purposes. This consent process was approved by the ethical review board at Kitasato Institution Hospital. All participants’ anonymity is preserved. This study was registered as clinical trial ID UMIN000022910.

The characteristics of the 200 patients enrolled are shown in Table 1. Of these, 43 participants were lost to follow-up during the 36-month study period. The most common reasons for drop-out were a discontinuation of visits to our hospital (n = 24) and referral to general physicians (n = 15). The other four participants lost to follow-up died (two from myocardial infarction, one from cardiac arrest, and one from a head injury). There were no differences in the baseline characteristics between the 43 patients who dropped out and the remaining 157.
Among the 157 patients, HbA1c levels had improved (decreased) in 104 participants (i.e., the responder rate was 66.2%), remained unchanged in 10 participants, and worsened (increased) in 43 patients at 36 months after first mLCD intervention. From baseline to 36 months, there were statistically significant improvements in HbA1c (decrease), DBP (decrease), TC (decrease), LDL-C (increase), and ALT (decrease) (Table 2). For HbA1c levels, the improvement occurred during the first 6 months and was maintained through 36 months (Figure 1 and Figure 2). The UN level increased significantly over 36 months, while Cr and eGFR showed no change. No significant changes were observed during the study period for body weight, HDL-C, TG, SBP, AST, or UA (Table 2). The record of hypoglycemic agents showed that the number of participants taking insulin injections and/or sulfonylureas did not change during the study period. As for dosage, the mean total daily dose of insulin per person decreased from 29.9 units at the start of the intervention to 23.6 units at 36 months post-intervention. The mean dose of glimepiride (which all sulfonylurea users were prescribed) per person also decreased, from 1.39 mg at the start of the intervention to 1.11 mg at 36 months. Participants who reduced their insulin and/or glimepiride dosage started taking metformin and/or dipeptidyl peptidase-4 inhibitors instead. Thus, the number of participants taking metformin and dipeptidyl peptidase-4 inhibitors increased during the 36 months (from 71 to 89 and 48 to 93, respectively).
FBS, fasting blood sugar; SBP, systolic blood pressure; DBP, diastolic blood pressure; HbA1c, glycated hemoglobin; TC, total cholesterol; LDL-C, low-density lipoprotein cholesterol; HDL-C, high-density lipoprotein cholesterol; TG, triglyceride; LOCF, last-observation carried forward; AST, aspartate aminotransferase; ALT, alanine aminotransferase; Cr, creatinine; eGFR, estimated glomerular filtration rate; UA, uric acid; UN, urea nitrogen; ACR, albumin to creatinine ratio (from random spot urine sampling); n.s., not significant.
During the 36 months, there was also an increase in the prescription of anti-hyperlipidemic agents. Thus, we performed a last-observation carried forward (LOCF) analysis on lipid profiles using the values when anti-hyperlipidemic agents were started or when their dosages increased. This analysis showed that LOCF TC improved, and LOCF TG worsened (Table 2).
Of the 43 participants receiving insulin, 31 maintained blood glucose self-monitoring records. Among these 31 participants, the incidence of hypoglycemia was 1.46% before the introduction of mLCD, which then increased to a maximum of 2.43% for 1–2 months after the first intervention. Several months later, the incidence of hypoglycemia stabilized at approximately 1.0% (Table 3).
To identify characteristics of participants who responded to the mLCD, we classified the 157 participants according to their change in HbA1c levels from baseline to 36 months as either responders, unchanged non-responders, or worsened non-responders. At baseline, the responders were younger and had higher HbA1c levels than the other two groups (Table 4). We also classified participants according to their baseline HbA1c levels and found that the HbA1c ≥ 9% group had the greatest improvement in HbA1c (Figure 3). On the other hand, the ALT ≥ 9% group had the greatest improvement in ALT. Change in body weight was independent of baseline HbA1c.
We then classified the participants according to baseline BMI. While HbA1c decreased independently of baseline BMI level, the change in body weight across the study period differed between BMI groups. While participants with a baseline BMI < 25 showed sustained body weight, and those with BMI ≥ 25 showed a decrease in body weight (Figure 4).
Although two participants experienced myocardial infarction and died, there was no incidence of stroke, peripheral artery disease, renal dysfunction, or liver dysfunction among the participants in this study. The two patients who died from myocardial infarction had a 10+ year history of diabetes and presented multiple risk factors including hypertension, type IIb dyslipidemia, obesity, and a history of smoking.

This study was funded by a Kitasato Institute Hospital Research Grant (Grant No. 8125).

The authors report no conflicts of interest related to this work. 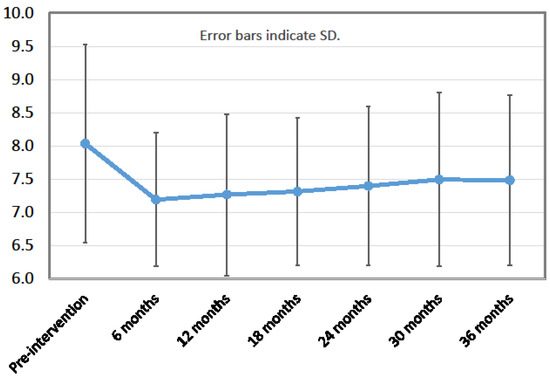 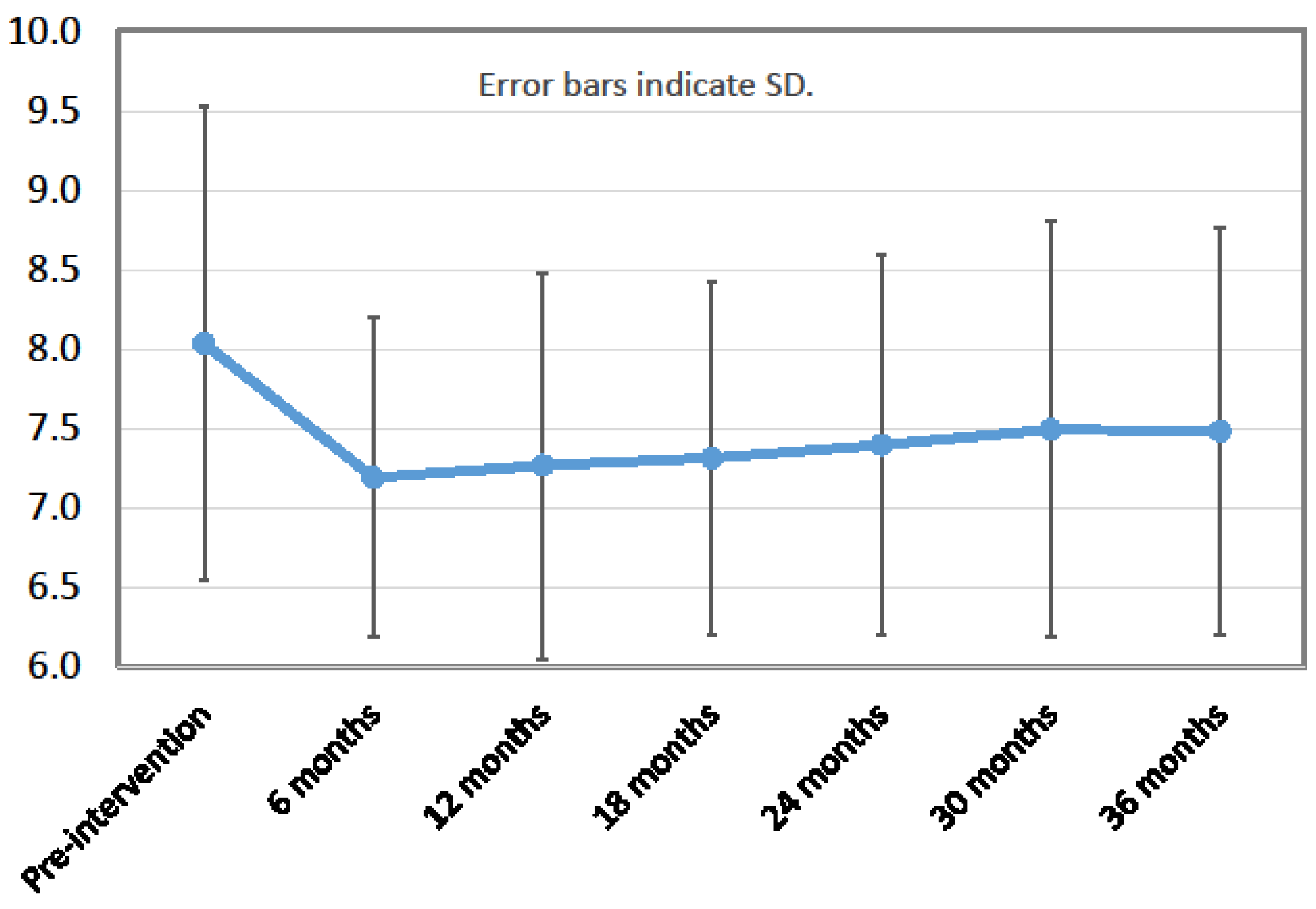 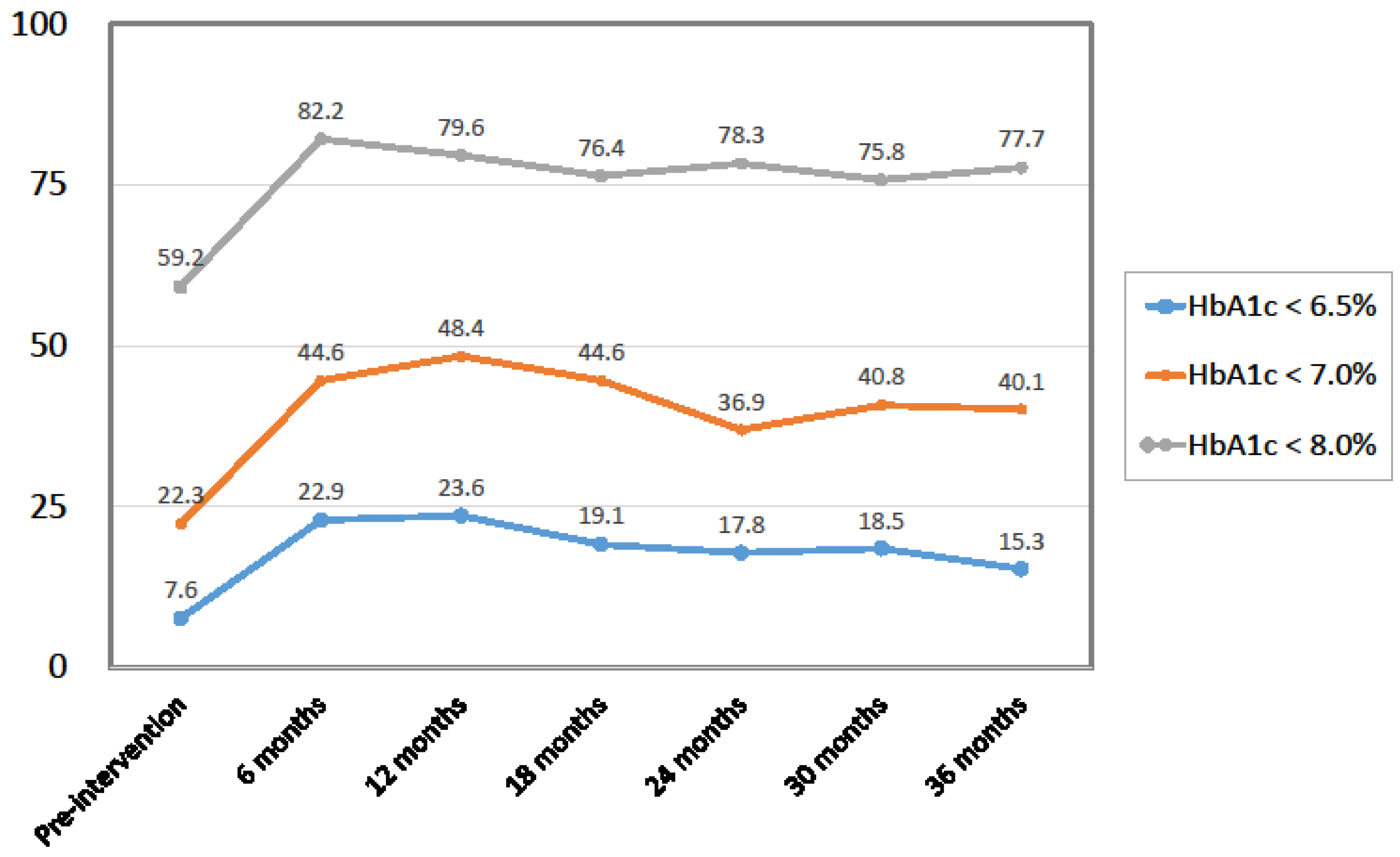