Immunomodulatory Protein Hydrolysates and Their Application
Previous Article in Journal

A Comparison of the Satiety Effects of a Fruit Smoothie, Its Fresh Fruit Equivalent and Other Drinks

Obesity is a multifactorial and polygenic condition that has become a very concerning public health issue that is affecting both developed and developing countries [1,2,3]. Overweight individuals (defined as body mass index (BMI) ≥ 25 kg/m2) account for approximately 30% of the global population, i.e., 2.1 billion people, of whom more than 600,000 are classified as obese (defined as BMI ≥ 30 kg/m2) [4]. The analysis conducted by the Global Burden of Disease Study 2013 showed that the overweight prevalence increased to 27.5% of adults and 47.1% of children in the past three decades [5]. The prevalence of obesity is currently higher in developed countries; nevertheless, approximately two-thirds of the obese population lives in developing countries [6]. Based on the current scenario, it is estimated that up to 50% of the global population will be classified as overweight or obese by 2030 [7]. Approximately 35% of adult individuals and 17% of children and adolescents (2 to 19 years old) are considered to be obese (defined by values above the 95th percentile of the BMI curve of these age groups) in the United States. It is estimated that approximately 300,000 people die due to obesity in the United States (U.S.) every year, which is the second highest cause of preventable death [8].
Cardiovascular diseases, type 2 diabetes (DM2), non-alcoholic fatty liver disease, and cancer stand out among the main health issues that are responsible for morbidity related to the obesity [9]. Obesity treatment and the treatment of its associated complications in developing countries has led to significant cost increases in healthcare. Costs that are linked to DM2, in particular, stand out, since 20–30% of overweight people present with a DM2 diagnosis, while 85% of diabetic patients are overweight or obese [10]. Calle et al. [11] conducted a prospective study of more than one million men and women and found that the lowest mortality rates, for all causes, in both men and women, occur in individuals with BMIs that are between 23.5 and 24.9 and 22.00 and 23.4 kg/m2, respectively. Another study including 900,000 adult individuals found that BMIs that were above 25 kg/m2 were associated with a 30% increase in general mortality rate per each 5 kg/m2 increase [12].
Obesity results from the interactions of different factors, including genetic, metabolic, behavioral, and environmental ones. Accordingly, the dramatic increase in obesity prevalence rates suggests that behavioral and environmental components are the main factors that are responsible for obesity, with an emphasis on eating habits and exercise. With regard to eating, modern societies converge to an eating pattern called the Western diet, which is characterized by the intake of foods with high energy densities. Such densities derive from the high contents of fat and carbohydrate, especially sugars, that are found in these food types, a fact that contributes to obesity development [13,14].
The profile of fatty acids that are present in a diet may also be relevant to obesity. It is worth highlighting that, according to anthropological and epidemiological studies, humans from the Paleolithic Era—40,000 years ago—consumed a ratio of omega-6 (ω-6) to omega-3 (ω-3) polyunsaturated fatty acids of approximately 1, mainly due to a high intake of marine and vegetable sources of ω-3 polyunsaturated fatty acids (PUFAs). However, there was a significant increase in the intake of lipids, trans fatty acids, and ω-6 PUFAs after the Industrial Revolution, as well as a small increase in the intake of ω-3 fatty acids; meanwhile, intakes of vitamins C and E decreased. Such changes are particularly relevant if one takes into account the participation of these nutrients in the inflammatory response, which is linked to the physiopathology of different non-transmissible chronic diseases, such as obesity, DM2, cardiovascular diseases, hypertension, and cancer [15,16,17].

The inflammatory process that occurs in obese people differs from the classical inflammatory response in certain respects. This inflammatory process manifests itself systemically and is characterized by a chronic low-intensity reaction. In this context, the TLR4 signaling pathway has been recognized as one of the main triggers in increasing the obesity-induced inflammatory response. This pathway responds to the increased exposure to saturated fatty acids and to LPS. Both of these are relevant in the context of obesity, with saturated fatty acids arising from within the adipose tissue triglyceride stores and the LPS arising from increased intestinal permeability perhaps due to an altered gut microbiota. Adipose tissue driven inflammation increases insulin resistance, both locally and systemically, so contributing to the co-morbidities of obesity, like DM2. Studies indicate that omega-3 fatty acids, namely EPA and DHA, have an anti-inflammatory effect, which involves attenuating the activation of the TLR4 signaling pathway. This has relevant implications for reducing meta-inflammation, and, consequently, resistance to insulin action and the risk of DM2 and cardiovascular disease in obese individuals. The omega-3 fatty acids can oppose the action of both classic TLR agonists (e.g., LPS) and saturated fatty acids in this regard.

The authors would like to thank The São Paulo Research Foundation and the Brazilian National Council for Scientific and Technological Development (CNPq) for the financial support.

Literature searching and initial manuscript preparation were performed by M.M.R. The manuscript was revised and finalized by P.C.C. and M.M.R. 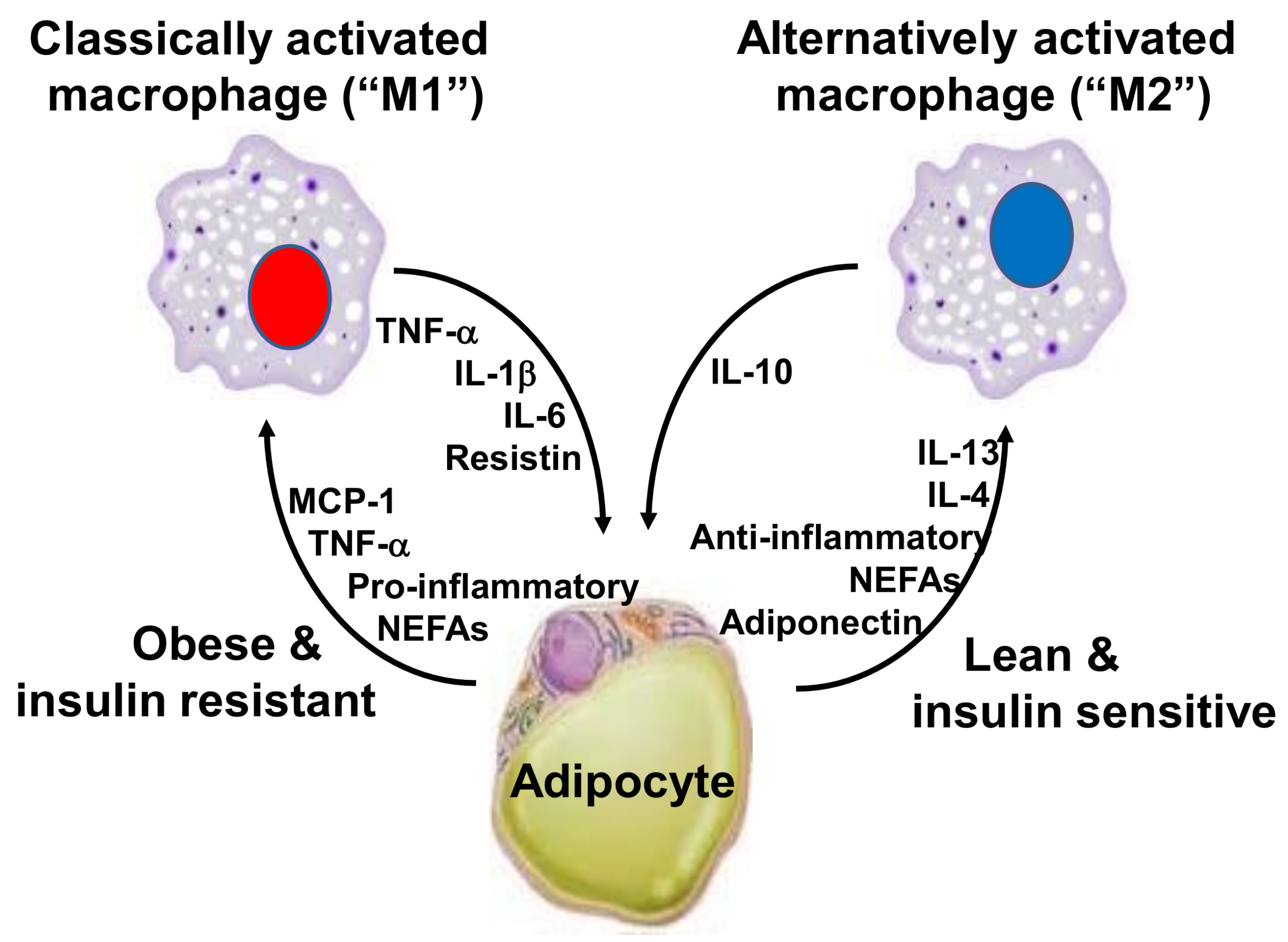 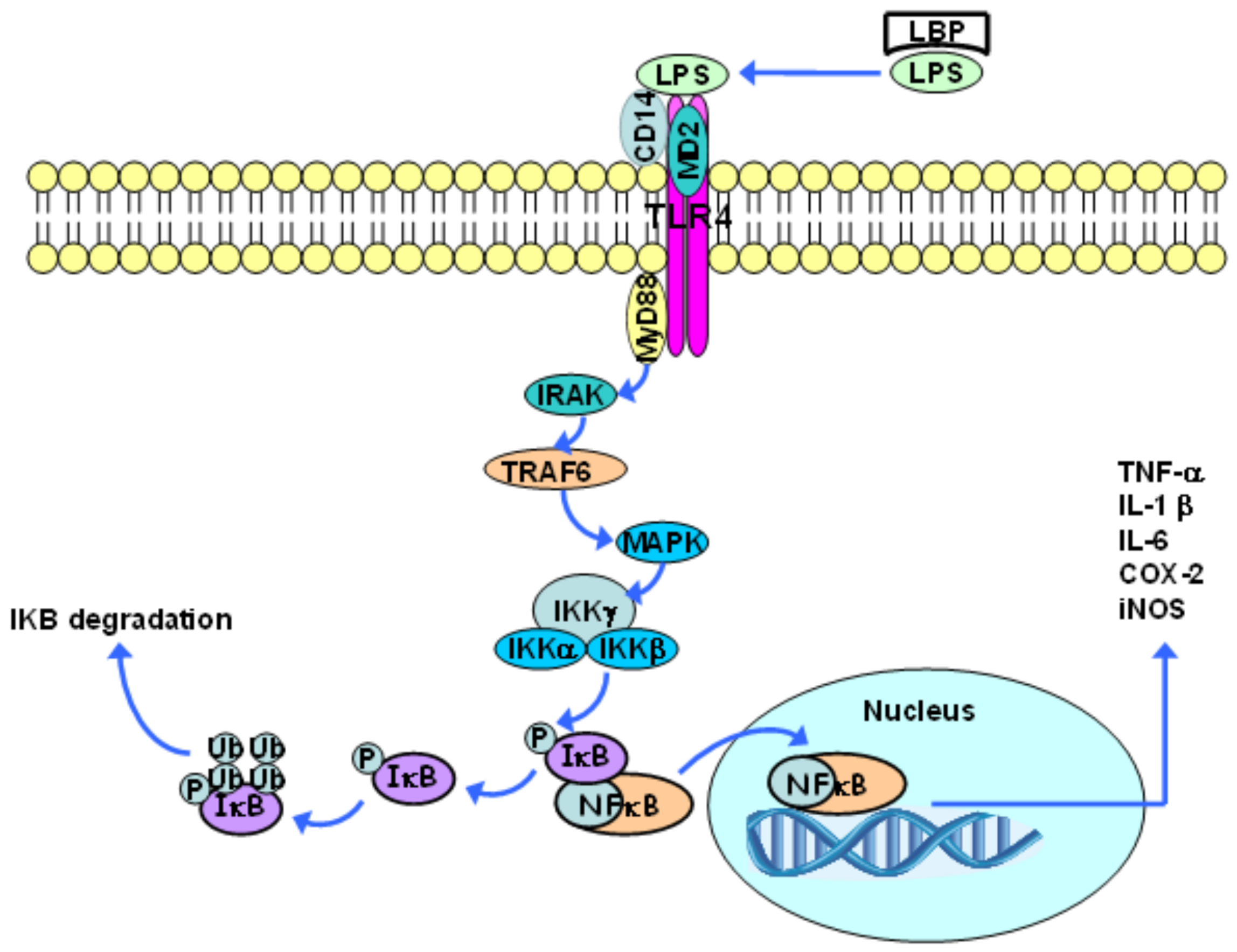 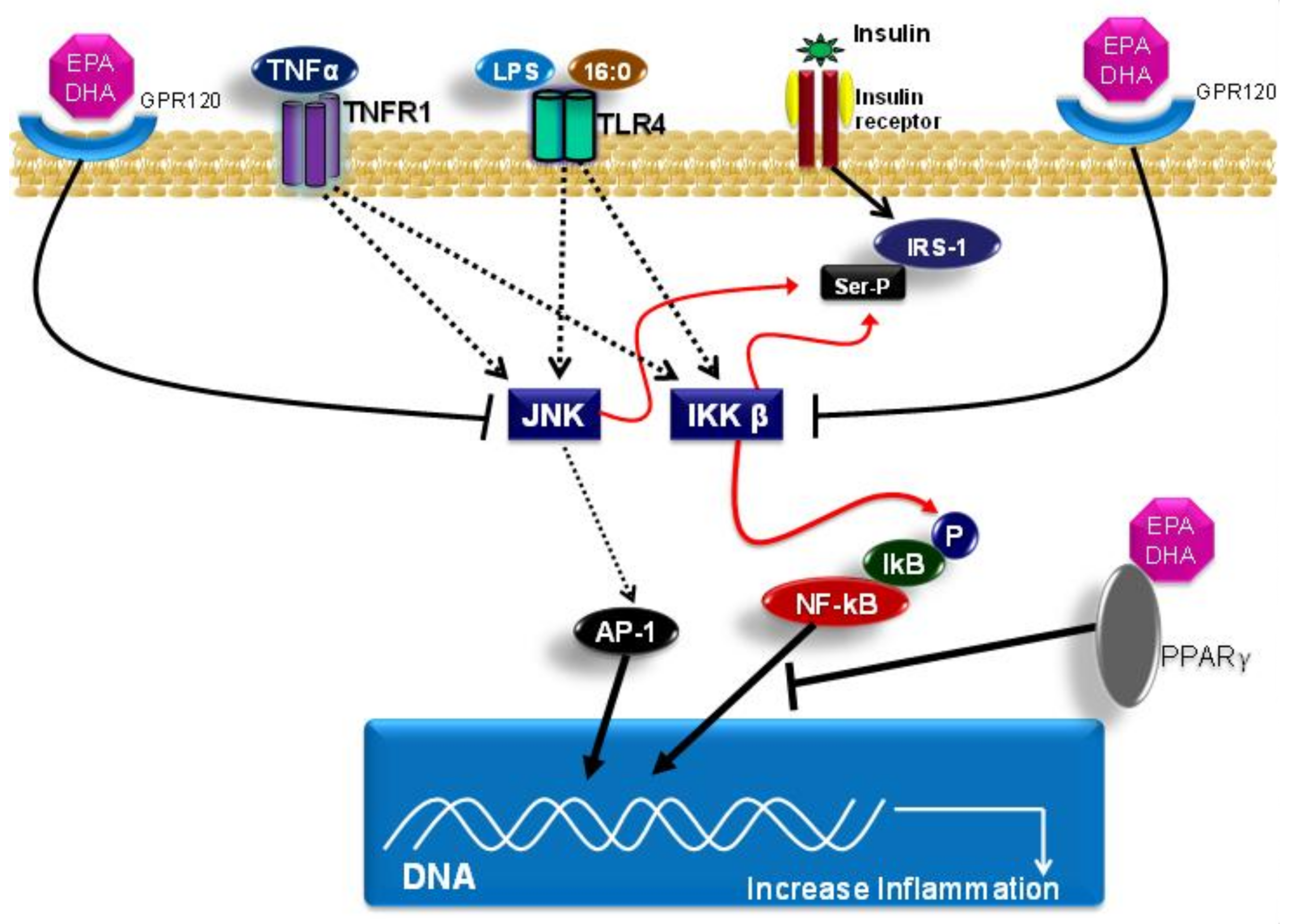