The Dietary Intake and Practices of Adolescent Girls in Low- and Middle-Income Countries: A Systematic Review
Previous Article in Special Issue

Evaluation of Dietary Supplement Use in Wheelchair Rugby Athletes

The Effect of Branched-Chain Amino Acids, Citrulline, and Arginine on High-Intensity Interval Performance in Young Swimmers

:
High-intensity interval training has drawn significant interest for its ability to elicit similar training responses with less training volume compared to traditional moderate-intensity protocols. The purpose of this study was to examine the effect of co-ingestion of branched-chain amino acids (BCAA), arginine, and citrulline on 8 × 50 m high-intensity interval swim performance in trained young swimmers. This study used a randomized cross-over design. Eight male (age 15.6 ± 1.3 years) and eight female (age 15.6 ± 0.9 years) swimmers completed both amino acids (AA) and placebo (PL) trials. The participants ingested 0.085 g/kg body weight BCAA, 0.05 g/kg body weight arginine and 0.05 g/kg body weight citrulline before the swim test in the AA trial. The average 50 m time was significantly shorter in the AA trial than that in the PL trial. The AA trial was faster than the PL trial in the first, second, and the seventh laps. The AA trial showed significantly higher plasma BCAA concentrations and lower tryptophan/BCAA ratio. The other biochemical parameters and ratings of perceived exertion were similar between the two trials. The results showed that BCAA, arginine, and citrulline, allowed the participants to swim faster in a high-intensity interval protocol in young swimmers.
Keywords:
central fatigue; tryptophan; ammonia; nitric oxide; stroke rate; stroke count

High-intensity interval training (HIIT) has drawn significant interest from athletes of various sports, as well as general or less-fit populations [1,2]. The high-intensity nature of this protocol recruits both type-I and -II muscle fibers [3], resulting in significant improvement in cardiopulmonary and anaerobic capabilities [1,2,4,5]. Several studies have shown that HIIT can elicit similar training responses in competitive swimmers with less training volume compared to traditional moderate-intensity protocols [6,7]. One of the important factors for the success in HIIT is the ability to maintain the training intensity, especially at the later stages. However, the accumulation of peripheral and/or central fatigue, resulting from repeated high-intensity bouts, leads to declines in exercise intensity at the later stages of HIIT, and potentially reduce the training effect [1,2].
The peripheral factors for fatigue in HIIT include limitations in anaerobic and aerobic energy supply, and intramuscular accumulation of metabolic by-products such as H+ and inorganic phosphate [8,9]. Moreover, the central nervous system may also be involved, as the capacity of the motor cortex to drive the knee extensors after high-intensity intermittent cycling was significantly decreased [10]. One of the mechanisms that contributes to central fatigue is the increase in cerebral concentration of the neurotransmitter serotonin (5-hydroxytryptamine) during exercise. The increased cerebral serotonin could lead to the feeling of fatigue and the loss of central drive and motivation [11]. An increase in serotonin concentration in presynaptic neutrons would lead to increased serotonin release and serotonin binding to postsynaptic receptors during nerve stimulation [12]. In addition, cerebral serotonin concentration was inversely correlated to running time to fatigue in rodents [13,14]. The rate of cerebral serotonin synthesis is regulated by the transport of free tryptophan, the precursor to serotonin, across the blood brain barrier [15]. Branched-chain amino acids (BCAA) have been hypothesized to alleviate central fatigue by competing with tryptophan in crossing the blood brain barrier through the L-system transporter [16]. Indeed, the decreased plasma free tryptophan/BCAA ratio would reduce the uptake of tryptophan, and subsequently, serotonin synthesis in the brain [14].
Nitric oxide (NO), a signaling molecule with a wide range of physiological functions, has been suggested to improve exercise performance by enhancing exercise-induced vasodilation [17], increasing the oxygenation status in the working muscles, and improving VO2 kinetics [18]. Supplementations of arginine or citrulline, both of which are precursors to NO, have been suggested to improve performance in high-intensity exercise [19,20].
Previously, we revealed that supplementation of BCAA and arginine could improve repeated sprint performance in handball players [21]. We later added citrulline to the supplementation regimen [22,23] because the combined ingestion of citrulline and arginine may be more effective in increasing plasma arginine concentration than consuming either amino acid individually [24]. Although the nutritional strategies to support HIIT have been proposed, most results were obtained from land-based exercise [25]. In addition, the combination of BCAA, arginine, and citrulline on high-intensity interval swimming performance has not been investigated. With the increasing application of HIIT in swimming training, the aim of this study was to examine the effect of co-ingestion of BCAA, arginine, and citrulline on 8 × 50 m swim performance in trained young swimmers. The biochemical and stroke parameters were analyzed to investigate the potential mechanism of the supplementation.

Eight male (age: 15.6 ± 1.3 years; height: 1.74 ± 0.05 m; weight: 64.4 ± 7.6 kg) and eight female (age: 15.6 ± 0.9 years; height: 1.58 ± 0.06 m; weight: 54.0 ± 8.4 kg) swimmers were recruited from a high school in northern Taiwan. All participants have been participating in swimming training for at least 7 years and have competed at the national or international level. The characteristics and personal best performance of the participants are presented in Table 1. The exclusion criteria included cardiovascular disease risks, musculoskeletal injuries, smoking, or consumption of protein supplements in the past three months. After the experimental procedure and potential risks were explained, all participants and their legal guardians gave their written informed consent. The study protocol was approved by the Research Ethics Committee of China Medical University Hospital (CRREC-105-003).

This study used a double-blind, placebo-controlled, randomized cross-over design. The study protocol is outlined in Figure 1. Each participant completed two trials, amino acids (AA) and placebo (PL), in a random order, separated by a wash-out period of at least seven days. The regular training schedule and dietary habits were maintained during the study period. The participants refrained from all training activity on the day prior to the trial. The study was conducted in January, 2017.

Thirty min after consuming the amino acids or placebo, the participants began a controlled 1000 m warm-up. The warm-up included 8 × 50 m easy swim focusing on individual skills, 200 m mixed style, and 4 × 100 m free style. The warm-up lasted approximately 20 min. The 8 × 50 m high-intensity interval swimming test started 60 min after consuming the amino acids or placebo, following the international rules with push starts. There was a 3-min active recovery period between each sprint. The approximate work to rest ratio of 1:6 is chosen to allow the better recovery of acid/base balance and creatine phosphate resynthesis [2]. The participants were asked to swim with their best style with the best effort in each sprint. Four male and five female participants swam front crawl, two male and three female participants swam butterfly, one male participant swam breaststroke and another male participant swam backstroke. Participants from both trials were grouped into 3 or 4 according to their best record, and competed at the same time to encourage the best performance. No food or fluid was provided during the test. The ratings of perceived exertion (RPE) were recorded immediately before and after the test using Borg’s 20-point scale [26].

The present results showed that BCAA, arginine, and citrulline allowed young participants to swim faster in a 8 × 50 m high-intensity interval protocol while feeling the same level of effort. Future research may focus on the modifications in training load to utilize the enhanced physiological and psychological mechanisms associated with these supplements.

The authors thank Yu-Fang Huang for her technical assistance. 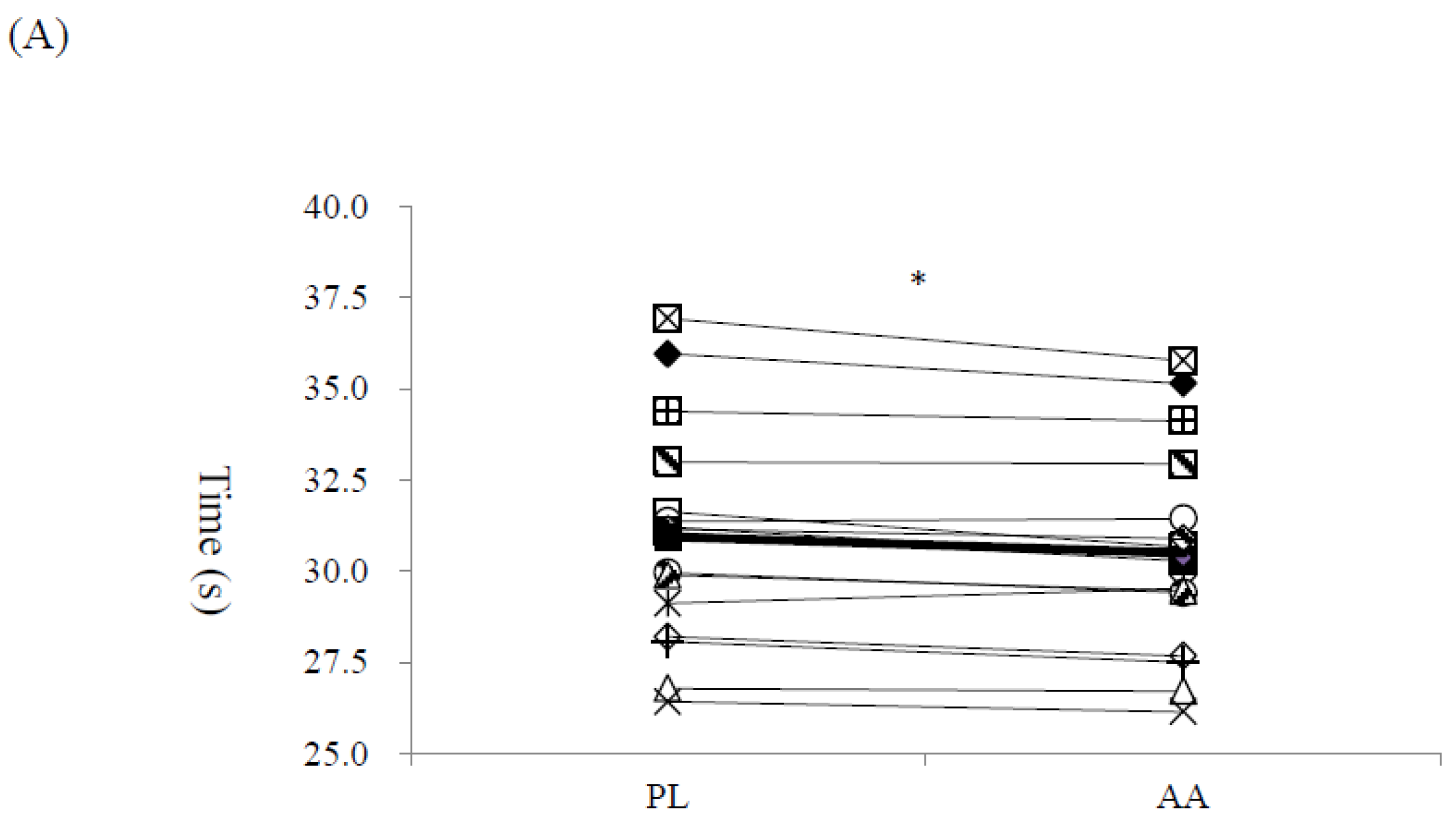 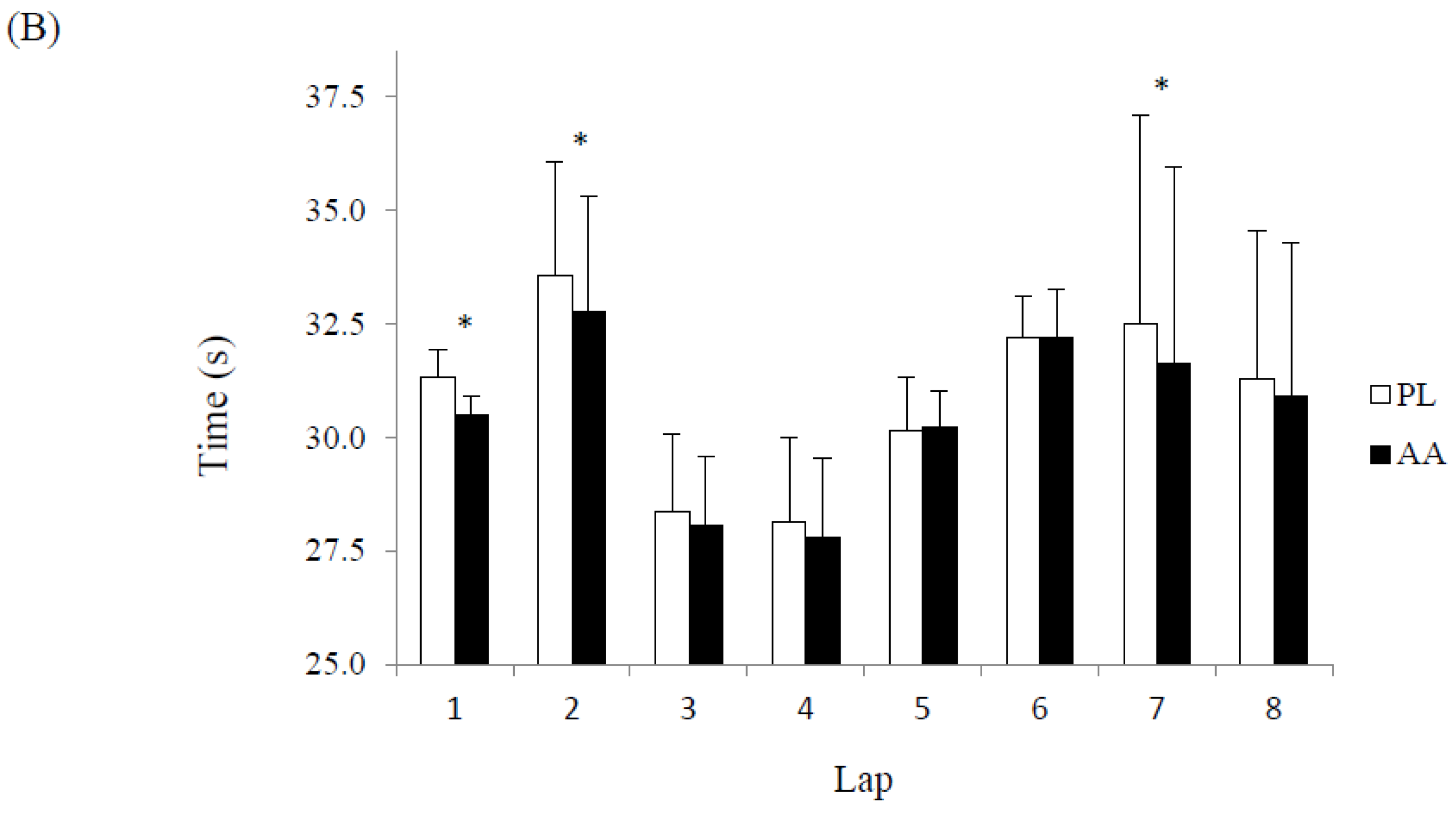