The Effect of Branched-Chain Amino Acids, Citrulline, and Arginine on High-Intensity Interval Performance in Young Swimmers

Wheat bran (WB) is rich in insoluble arabinoxylan, while BARLEYmax (BM) is a barley line that is rich in fructan, resistant starch, and β-glucan. In the present study, we investigated which of these two fiber sources would produce more favorable changes in the fecal variables of healthy subjects. Sixty healthy subjects were randomly divided into four groups (n = 15 per group) and fed twice daily for 4 weeks with baked cereal bars containing neither WB nor BM (WB−BM−), WB without BM (WB+BM−), BM without WB (WB−BM+), or WB and BM (WB+BM+). At baseline and after 4 weeks, the fecal microbiota composition and the concentrations of short-chain fatty acids were measured. A significant interactive effect of WB and BM on the abundance of genus Bacteroides was observed at week 4. The abundance of butyrate-producing bacteria and the fecal concentration of n-butyrate were significantly higher in the WB+ groups than in the WB− groups. In conclusion, WB was associated with elevated fecal concentrations of short-chain fatty acids including butyrate owing to an increase in the abundance of butyrate-producing bacteria. Additionally, the combination of WB and BM was associated with an increase in the abundance of genus Bacteroides. Therefore, both WB alone and WB combined with BM favorably influenced the fecal variables of healthy subjects. View Full-Text
Keywords: wheat bran; BARLEYmax; fecal butyrate; butyrate producer; Bacteroides wheat bran; BARLEYmax; fecal butyrate; butyrate producer; Bacteroides
►▼ Show Figures 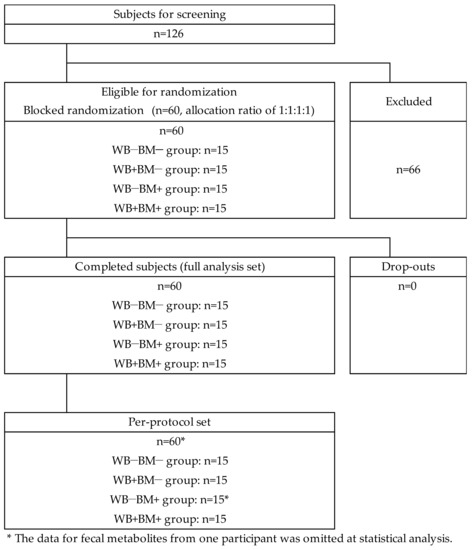