Are Gluten-Free Diets More Nutritious? An Evaluation of Self-Selected and Recommended Gluten-Free and Gluten-Containing Dietary Patterns
Next Article in Special Issue

Excessive salt intake has negative effects on health and persists as a dietary problem in Spanish children. However, the analysis of dietary sodium sources has not been extensively studied. A group of 321 children between 7 and 11 years old from five Spanish regional communities was studied. A three-day dietary record was used to determine the contribution of food and beverages to dietary sodium intake. The food consumed was classified based on the level of processing (NOVA classification) and the nutritional profile. Boys consumed more dietary sodium and sodium from ultra-processed food (UPF) than girls (p < 0.05). The main sources of dietary sodium from discretionary food were meat and meat products (25.1%), some ready-to-eat and pre-cooked dishes (7.4%) and sugars and sweets (6.3%). More than 4/5 of the total dietary sodium consumed came from processed foods (PF) and UPF. Ready-to-eat and pre-cooked dishes (14.4%), meat and meat products (10.6%), and cereals (10.2%) were the most relevant UPF. These results demonstrate that a key point for Spanish children is a reduction in the sodium content in PF and UPF, whether these foods are for basic or discretionary consumption. Furthermore, a decrease in the frequency and the quantity of discretionary food consumption should be encouraged. View Full-Text
Keywords: sodium; food processing; ultra-processed; Spanish children; food environment; discretionary food; salt sodium; food processing; ultra-processed; Spanish children; food environment; discretionary food; salt
►▼ Show Figures 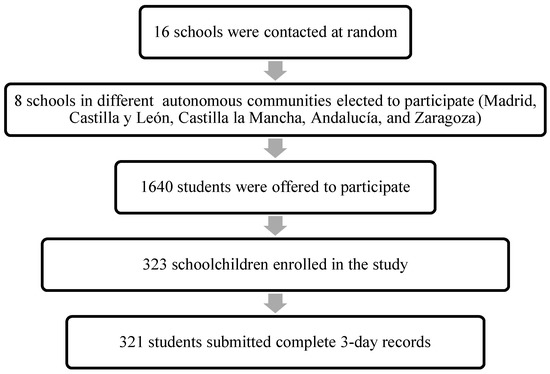 Cuadrado-Soto, E.; Peral-Suarez, Á.; Aparicio, A.; Perea, J.M.; Ortega, R.M.; López-Sobaler, A.M. Sources of Dietary Sodium in Food and Beverages Consumed by Spanish Schoolchildren between 7 and 11 Years Old by the Degree of Processing and the Nutritional Profile. Nutrients 2018, 10, 1880.


Cuadrado-Soto E, Peral-Suarez Á, Aparicio A, Perea JM, Ortega RM, López-Sobaler AM. Sources of Dietary Sodium in Food and Beverages Consumed by Spanish Schoolchildren between 7 and 11 Years Old by the Degree of Processing and the Nutritional Profile. Nutrients. 2018; 10(12):1880.