Metformin (Met) and lactoferrin (Lf) both exhibit beneficial effects on body weight management and lipid accumulation. However, the synergistical action of Met and Lf remains unclear. In this study, 64 mice were divided into five groups, namely, the control group, high-fat diet (HFD group), HFD with Met (Met group), Lf (Lf group), and a combination of Met and Lf (Met + Lf group). Met (200 mg/kg body weight) and Lf (2 g/100 mL) were administrated in drinking water. The experiment lasted for 12 weeks. Body weight, serum, and hepatic lipids were determined. Histology of the liver and perirenal fat was observed. Protein expression related to hepatic lipid metabolism was also measured. HFD significantly increased body weight, visceral fat weight, and lipid profiles, which lead to obesity and dyslipidemia in mice. Compared with the HFD group, the treatments significantly decreased body weight and Lee’s index (body mass index of mice) with the lowest values in the Met + Lf group. The treatments also decreased the weight of visceral fat, and improved circulating lipid profile and the ability for regulating glucose intake. The adipocyte size and serum TC level were significantly lower in the Met + Lf group as compared with those in the Met or Lf group. The treatments alleviated hepatic lipid accumulation, especially in the Met + Lf group. For protein expression, the p-AMPK/AMPK ratio, a key kinase-regulating cellular energy homeostasis, was significantly higher in the Met + Lf group than the ratio in the HFD group. Similarly, the treatments significantly downregulated the protein expression of lipogenic enzymes (FAS, ACC, and SREBP-1) and upregulated the protein expression of lipolytic enzyme (ATGL). The protein expression of HMGCoAR, which is an important rate limiting enzyme in cholesterol biosynthesis, was only significantly lower in the Met + Lf group than in the HFD group. In conclusion, Met and Lf, either alone or in combination, prevented HFD-induced obesity and improved lipid metabolism. View Full-Text
Keywords: metformin; lactoferrin; lipid; liver; obesity metformin; lactoferrin; lipid; liver; obesity
►▼ Show Figures 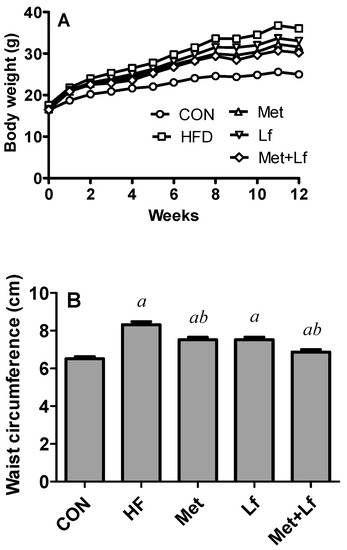