Further Evidence on Efficacy of Diet Supplementation with Fatty Acids in Ocular Pathologies: Insights from the EAE Model of Optic Neuritis
Previous Article in Journal

Patterned hair loss (PHL) affects around 50% of the adult population worldwide. The negative impact that this condition exerts on people’s life quality has boosted the appearance of over-the-counter products endowed with hair-promoting activity. Nutraceuticals enriched in polyphenols have been recently shown to promote hair growth and counteract PHL. Malus pumila Miller cv. Annurca is an apple native to Southern Italy presenting one of the highest contents of Procyanidin B2. We have recently shown that oral consumption of Annurca polyphenolic extracts (AAE) stimulates hair growth, hair number, hair weight and keratin content in healthy human subjects. Despite its activity, the analysis of the molecular mechanism behind its hair promoting effect is still partially unclear. In this work we performed an unprecedented metabolite analysis of hair follicles (HFs) in mice topically treated with AAE. The metabolomic profile, based on a high-resolution mass spectrometry approach, revealed that AAE re-programs murine HF metabolism. AAE acts by inhibiting several NADPH dependent reactions. Glutaminolysis, pentose phosphate pathway, glutathione, citrulline and nucleotide synthesis are all halted in vivo by the treatment of HFs with AAE. On the contrary, mitochondrial respiration, β-oxidation and keratin production are stimulated by the treatment with AAE. The metabolic shift induced by AAE spares amino acids from being oxidized, ultimately keeping them available for keratin biosynthesis. View Full-Text
Keywords: nutraceuticals; apple polyphenols; Procyanidin B2; anti-oxidants; hair growth nutraceuticals; apple polyphenols; Procyanidin B2; anti-oxidants; hair growth
►▼ Show Figures 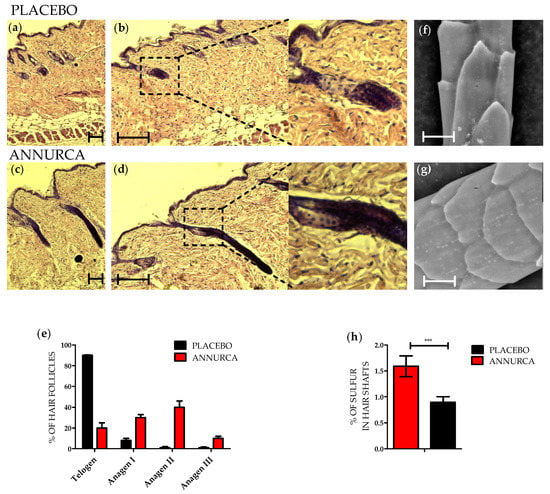